YesJulz Brings “The Juice” to Lincoln Road With Pop-Up 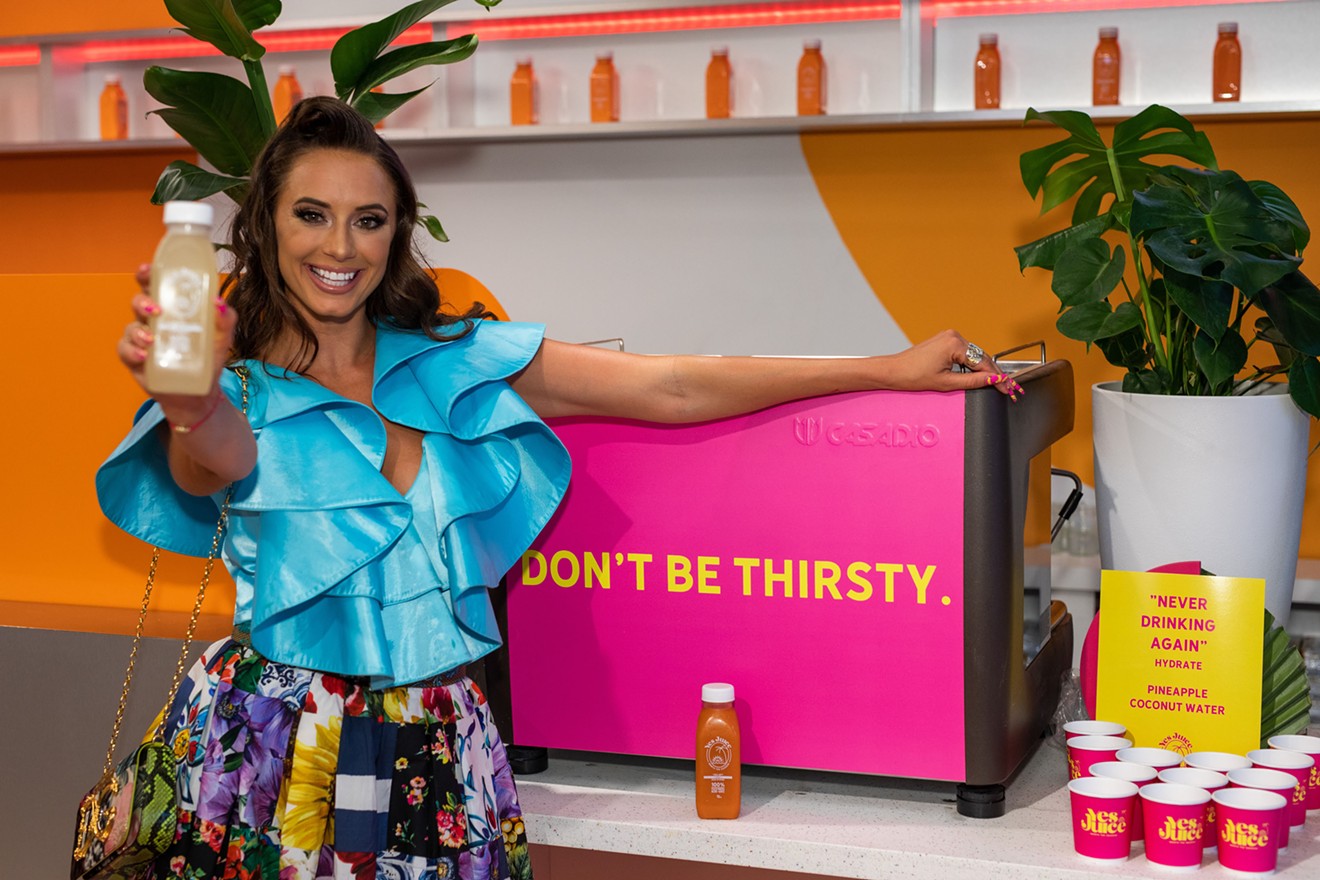 YesJulz holds up the "Never Drinking Again" juice at YesJuice. Photo by World Red Eye
Lincoln Road, known for its touristy shops and restaurants, might have a fresh appeal to locals, thanks to the addition of YesJuice. The juice bar opened its doors to the public this past Saturday.

The face behind the new café is Julieanna Goddard, AKA YesJulz, a Miami influencer and entrepreneur best known for her event and party promotions. YesJuice will first operate as a six-month pop-up at Showfields, with plans for future expansion.

Juice names reflect the personality of Miami, with each catering to a different purpose. Goddard's personal favorite, the “Yes Juice!” is a pick-me-up made with grapefruit, orange, pineapple, lime, and celery, while the “Never Drinking Again” promises a refreshing hangover cure with pineapple and coconut water.

“The basis of everything that I do is collaboration,” Goddard tells New Times. “To me, it’s fun to have great ideas and make them come to life, but only if you’re doing it with other people. I couldn't have done this alone and the people that are on board with me are just the cream of the crop.”

Beyond the menu, Goddard says the café will promote “community, entertainment, and health” through an ongoing series of events. Expect exercise and yoga classes, book clubs, brunches, dinners, and even rollerblade meetups.

“YesJuice is more than a store, more than a café — it’s a congregating opportunity for like-minded individuals in our community,” Goddard says.

Taking community a bit further, she plans to host “Office Hours," a set time every week where she'll make herself available at the café for questions patrons may have about the industry, party planning, music releases, and more.

Goddard thought up YesJuice in October and managed to open the pop-up in about half a year.

The pandemic slowed down every facet of life, but it completely halted the entertainment industry. Goddard had built her social-media following around promoting clubs, events, concerts, music artists, and brands. She suddenly found herself at home, unable to host those events or promote her artists’ work.

“It was like my first time really staying at home in maybe a decade,” Goddard says. "This is a time to recalibrate: When we are able to go back outside again, what type of people do I want to be around, and what kind of things do I want to be filling my time with?’”

The pandemic pondering led her to a realization: She wanted to focus on being healthier — and not just with respect to her diet.

“I also wanted to achieve healthy habits and a healthy balanced schedule. The term 'Never Not Working' is something that I coined because I love to work, but I learned over the past few years that working on yourself is just as important,” Goddard elaborates.

Goddard began researching juice bars and formulating a business plan. The final piece clicked into place when a friend who was visiting Jamaica sent a photo of a handpainted sign that said “Yes Juice.”

“I was like, ‘Wow this is it, this is the big idea!” Goddard recounts. “It was almost like God was just putting this thing in front of me and I couldn't ignore it.”

Seven months and many taste tests later, YesJuice has taken up temporary residence at Showfields as a pop-up.

Goddard has big plans for the brand, however. She mentions offering online distribution for fans outside of South Florida and juice cleanses for different focuses. But ultimately, she says, “We’re coming for Starbucks. There's a lot of juice places out there but there’s not a nationwide brand that we all know. And coffee is great but I think it’s time to get juice at the forefront of that conversation.”

“I’m coming from the entertainment business, so I’m used to having insane turnaround time,” Goddard adds. “So now I’m already ready to go nationwide and my team is like, ‘Julz, we turned this around so fast, you should be proud of where you’re at!’  And I’m like, ‘I’m ready to be in Whole Foods!’”

YesJuice Pop-Up at Showfields. 530 Lincoln Rd., Miami Beach; yesjuice.co. Open Monday to Thursday
from noon. to 7 p.m.; Friday to Sunday from noon to 8 p.m.
KEEP MIAMI NEW TIMES FREE... Since we started Miami New Times, it has been defined as the free, independent voice of Miami, and we'd like to keep it that way. With local media under siege, it's more important than ever for us to rally support behind funding our local journalism. You can help by participating in our "I Support" program, allowing us to keep offering readers access to our incisive coverage of local news, food and culture with no paywalls.
Make a one-time donation today for as little as $1.