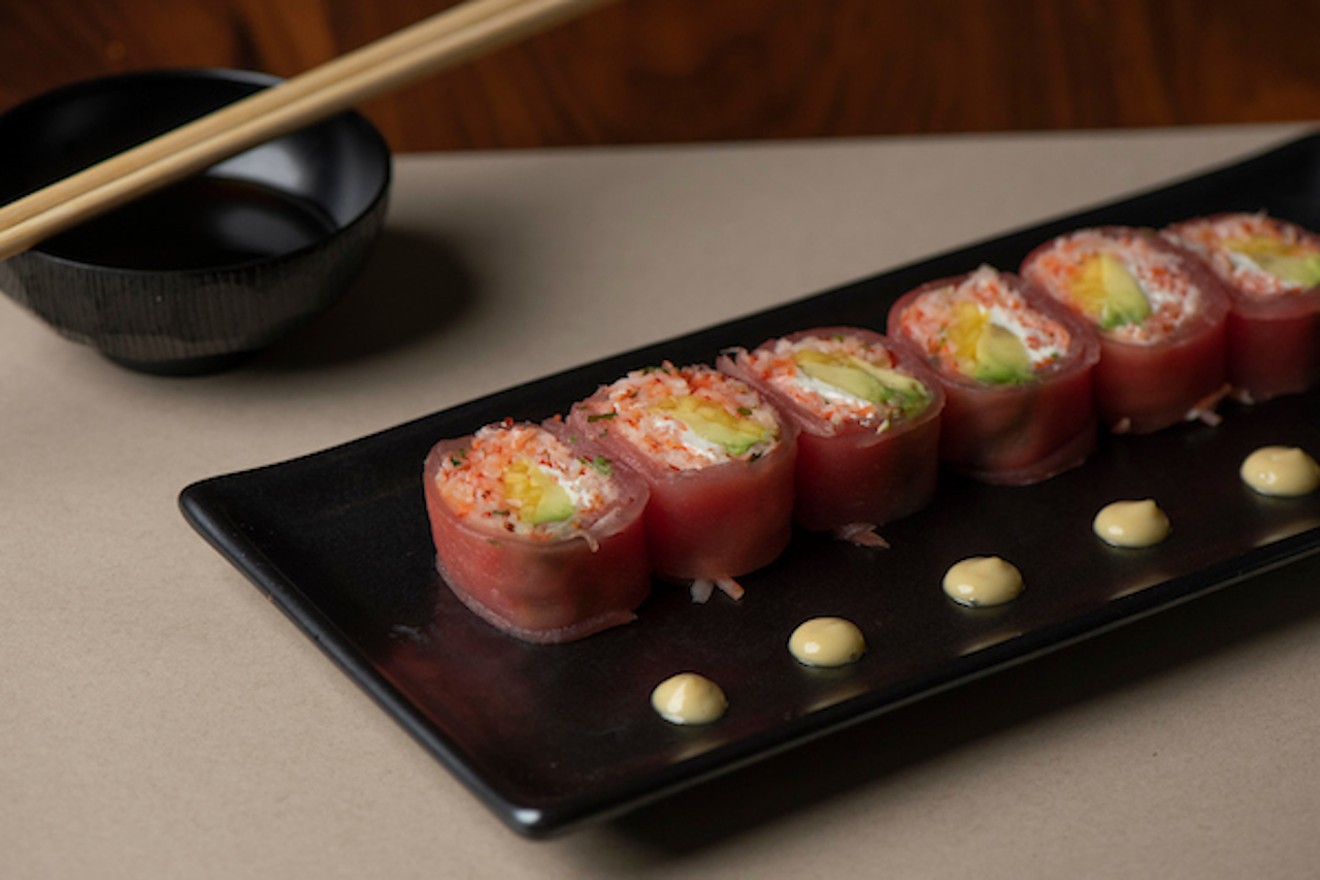 The "Ke-uh Roll" at Ke-uh. Photo courtesy of Ke-uh
Ke-uh, a restaurant offering a diverse and eclectic menu of Japanese robata and izakaya selections, has opened at the Acqualina Resort in Sunny Isles Beach.

It is the second location for the restaurant, which was founded in Weston in June 2017 by Venezuelan chef Carlos Delfino (owner of Kazumi in Key Biscayne), seven of his best childhood friends, and executive chef Oscar Noborikawa (formerly of Nobu). The name is a play on the Spanish expression, "¿qué hubo?" which translates as "what's up?"

"We picked Weston first because there was no competition in the area," says Ke-uh co-owner Daniel Fernandez. "There were many traditional Asian restaurants, but at the time the community had no Asian-fusion tapas concepts nearby."

Over two years, Ke-uh attracted a loyal clientele, and the group began scouting for a second location. Last September, the team was about to close on a space in Wilton Manors when Acqualina CEO Deborah Yager Fleming came to eat at the restaurant and left her business card. The group jumped at the chance to open in the space previously occupied by AQ by Il Mulino and a sushi bar by Hiro Yakko San, which had shut down during the pandemic.

Ke-uh at the Acqualina debuted on December 26, boasting a full bar, an indoor dining room, and outdoor seating at a pool area overlooking the ocean.

"The food and prices are identical to the Weston locations. The difference in is the ambiance and the service, since the resort helped with the training of the staff," Fernandez tells New Times. "At Acqualina, Ke-uh is much more about fine dining, yet with a casual menu. We want to encourage a communal experience."

To run Ke-uh's kitchen at the resort, the group tapped chef Edwin Delgado (Nobu, Tanuki), who dishes out hot and cold izakaya-style offerings such as spicy honey tempura shrimp ($9) and Wagyu sliders with quail egg and special sauce ($12). Sushi rolls include the "Passion," made with crisped shrimp, avocado, and cream cheese and topped with plantain and passion guava sauce ($17); and the "Chirashi," packed with tuna, hamachi, salmon, and avocado and topped with red caviar ($16).

For Fernandez, the balance of flavors that makes the concept stand out lies in the quality of fish flown in from Japan and the Mediterranean, but more than anything in the skill of the chefs. "They are very passionate about their work," he says, "and the respect they have for each ingredient shines through in every bite."

Ke-uh. 17875 Collins Ave. (in the Acqualina Resort), Sunny Isles Beach; 305-918-8000; acqualinaresort.com. Open daily from 5:30 to 10 p.m.
KEEP MIAMI NEW TIMES FREE... Since we started Miami New Times, it has been defined as the free, independent voice of Miami, and we'd like to keep it that way. With local media under siege, it's more important than ever for us to rally support behind funding our local journalism. You can help by participating in our "I Support" program, allowing us to keep offering readers access to our incisive coverage of local news, food and culture with no paywalls.
Make a one-time donation today for as little as $1.
Juliana Accioly
Contact: Juliana Accioly