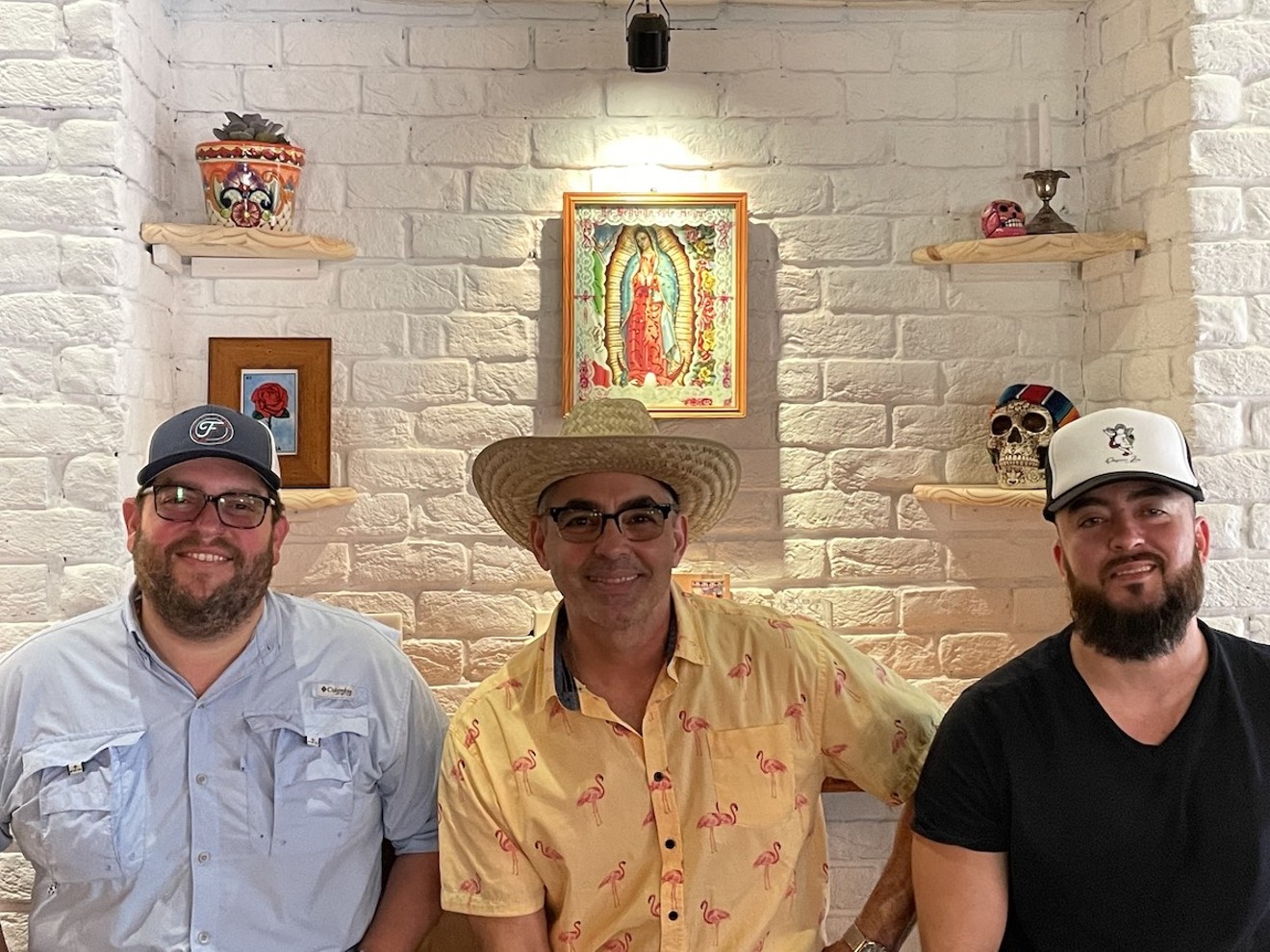 Restaurateurs Dan Binkiewicz, Mauricio Lacayo, and Orlando Lamas, along with cantinero Julio Cabrera and chef Daniel Gonzalez, envision Chela's as a long-term pop-up — and, if all goes well, maybe a permanent fixture.

Binkiewicz is responsible for some of Miami's best bars, including Blackbird Ordinary in Brickell, the Bar in Coral Gables, and Sweet Liberty on South Beach. Cabrera, who brought the elegance of Cuba's cantineros to Cafe la Trova in Little Havana, has graced the cover of GQ and was named "bartender of the year" at the 2019 Spirited Awards at Tales of the Cocktail. Lacayo, a partner at Cafe La Trova, also co-owns the Bend Liquor Lounge in Miami Lakes in partnership with Lamas. And Miami dining scene veteran Gonzalez co-owns HotLime Craft Tacos and Ceviche Bar, which operates locations in Sistrunk Market in Fort Lauderdale and at MIA Market in the Design District.

The quintet has been quietly working on transforming a shuttered location of the On the Border Mexican restaurant chain that's prominently located at the entrance to Miami Lakes' Main Street development.

Lacayo tells New Times Miami Lakes is a perfect location for the venture, which will feature a family- and dog-friendly outdoor area. He notes that Lacayo and Orlando opened the Bend six years ago and business there has been brisk. "We know the neighborhood and we know there's a local crowd that appreciates good cocktails and craft beer," Lacayo says. "We felt very comfortable opening another location in downtown Miami Lakes."

He says Graham Companies, the developers behind much of the commercial development in Miami Lakes, offered to work with him, and that when he and Lamas saw the space On the Border abandoned last year, they recognized its possibilities and the value of doubling down on the neighborhood.

Cabrera, who lives in Miami Lakes, was an easy sell when he saw the restaurant's layout, which was designed to look like a house and courtyard. Binkiewicz was enthusiastic, too, as was Gonzalez, and the team quickly set about transforming the outsize chain location into a beer garden.

The new space, which provides plenty of room to spread out tables for social distancing, is divided into several sections: The bar is set off by a white brick wall adorned with Mexican pottery, a shrine to the Virgin of Guadalupe, and an array of tequilas. A massive Florida room wraps around the bar area, furnished with cozy vintage chairs and sofas.  An adjacent room has yet to be repurposed as an indoor beer garden complete with festive lighting.

The vast outdoor patio, which will welcome friends, families, and canines alike, will be equipped with a system called BBot that allows for ordering and paying directly with a smartphone via Apple Pay and similar methods.

Cabrera, naturally, is in charge of the beer list and cocktail menu. Expect classic margaritas fancied up with fresh, locally available fruits like spicy mango and guava; Rositas — a Mexican twist on the  negroni made with tequila and sweet vermouth; and an El Diablo, made with ginger beer, tequila, lime, and crème de cassis.

Cabrera says that while the space is too casual for the performative cantinero style of bartending he so famously brought to Cafe la Trova, the cocktails will be held to a similar high standard. "We will still have the same level of professionalism and attention to detail at the bar," says Cabrera.

The beer list will feature Mexican beers in bottles and on draft, along with a host of selections from local craft breweries, including J. Wakefield, Lost City, and Biscayne Bay Brewing. The emphasis will be on Latin-inspired brews served in the classic dimpled-glass mugs common to German beer halls.

Chela's is expected to open as soon as the end of next week as a pop-up to take advantage of the mild Miami winter and spring. If all goes well, the partners are fully committed to extend the run further — perhaps permanently.

Chela's Beer Garden. 15301 NW 67th Ave., Miami Lakes. Opening early February 2021.
KEEP MIAMI NEW TIMES FREE... Since we started Miami New Times, it has been defined as the free, independent voice of Miami, and we'd like to keep it that way. With local media under siege, it's more important than ever for us to rally support behind funding our local journalism. You can help by participating in our "I Support" program, allowing us to keep offering readers access to our incisive coverage of local news, food and culture with no paywalls.
Make a one-time donation today for as little as $1.