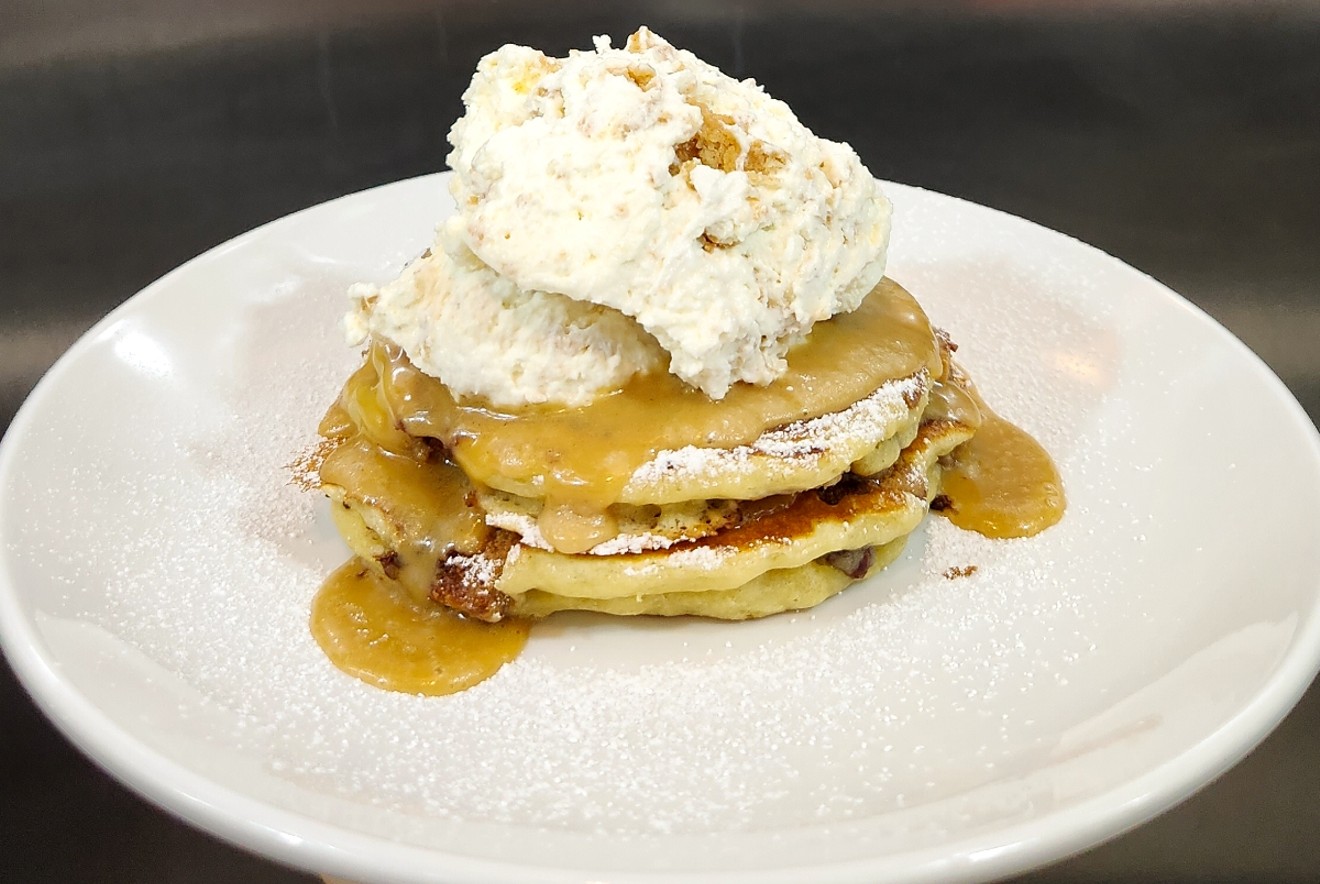 The partners and friends for a decade and a half soon realized that their recipe for success came in batter form. The pancake-focused food truck was a hit, and people would wait upwards of an hour for stacks of hotcakes, both sweet and savory. The truck reached national acclaim when it was featured on the Food Network.

Ortiz and Telle realized that they were outgrowing their little food truck. They looked around for a brick-and-mortar space, thinking for a bit about opening a spot in the Design District. Then, they realized they belonged in the community where they regularly parked their food truck: Kendall. "We looked at a few spaces, but being in Kendall was the right choice. As much as it sounded cool to be in Wynwood, this is our home," says Joaquin Ortiz. The partners signed a lease about a block and a half from G Holmes Braddock Senior High School — a perfect place to cater to families in need of some afterschool or post-game sustenance.

The Jealous Fork restaurant will soft open next Monday and offer the same pancakes that wowed customers at the food truck, along with two new pancakes — peanut butter cup and banana walnut.

In addition, Jealous Fork will serve a menu of savory items in what amounts to "stylish American cuisine," according to Ortiz, who says there will be about a dozen different dishes to start, with more items introduced in time. "The menu we're starting with will have an all-day brunch theme.  Once we stretch our legs, we can add more," he says. Items will include brown sugar bacon with red chili and black pepper, barbecued chili ribs with fresh cilantro, and a complete breakfast in a Mason jar. "We start with sweet potato puree, applewood smoked bacon, eggs, and fresh chives. When you mix it together, it's the perfect breakfast bite," says Ortiz.

Jealous Fork will offer what's sure to turn up on every Instagram feed in Miami: corn ribs. The restaurant partner describes the dish as fresh corn on the cob quartered into long slices and then flash-fried. "They look just like ribs — but they're corn," explains Ortiz. The corn ribs are served with homemade crema.

The restaurant will also offer a few vegetarian and vegan options, including an udon noodle stir fry. In the near future, there will also be an all-vegan pancake.

But the secret ingredient to all of these dishes is love and respect.

The partners, who also own Tea & Poets in South Miami, say that their philosophy is to be kind to all. "We have real conscious servers and waitstaff. When someone comes into our restaurant or eats at our food truck, we have the opportunity to give that guest a memorable experience. If you're doing things with kindness, the result has to be phenomenal."

As for the little food truck that could? Well, it's up for sale, according to Ortiz. "People have been suggesting we keep it for catering, but I feel that would divide our focus. And we want to give the restaurant all of our energy to make it spectacular."

The pancake entrepreneur then pauses for a second. "On the other hand, if it doesn't sell, maybe there is a Jealous Fork traveling option. We'll just leave it out there for the universe to decide."

Jealous Fork. 14417 SW 42nd St., Miami; jealousfork.com. Daily 11 a.m. to 11 p.m. (hours may change during the soft opening). Opens Monday, January 23.
KEEP MIAMI NEW TIMES FREE... Since we started Miami New Times, it has been defined as the free, independent voice of Miami, and we'd like to keep it that way. With local media under siege, it's more important than ever for us to rally support behind funding our local journalism. You can help by participating in our "I Support" program, allowing us to keep offering readers access to our incisive coverage of local news, food and culture with no paywalls.
Make a one-time donation today for as little as $1.