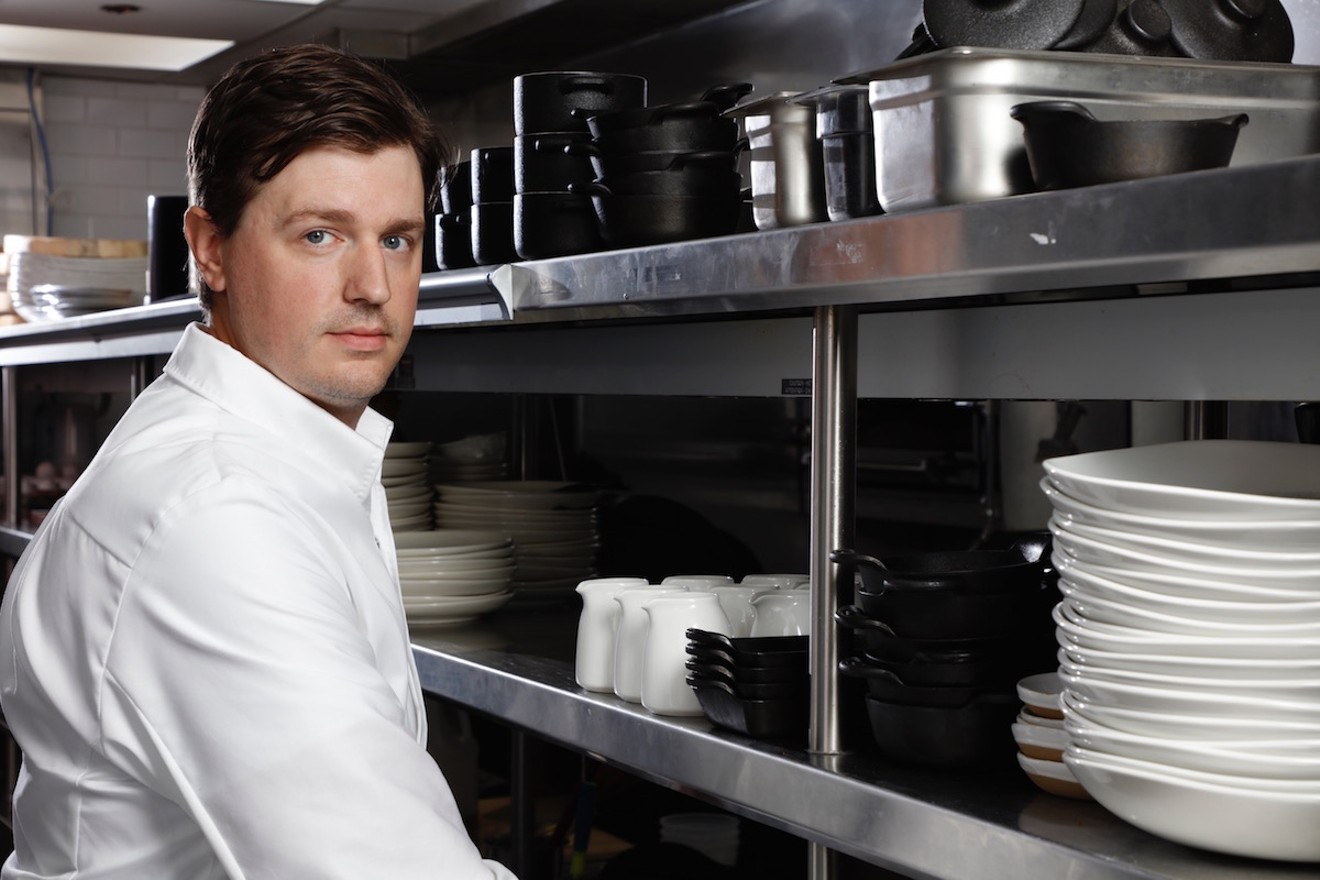 "I think about when I started in the restaurant business — all the screaming, yelling, and stupid shit I did because I was a new restaurateur without confidence," the black-clad hospitality-industry mogul says over a plate of hard-shell tacos in his Miami Beach home. His charcoal-hued yacht, Groot, sways nearby. "Eventually, I learned from my mistakes and went back to people to ask for forgiveness, and I wouldn't be where I am without it."

Less than four months after a controversial incident led chef de cuisine Will Crandall to resign from Michael Mina's Stripsteak at the Fontainebleau Miami Beach, Grutman has hired the 33-year-old in a similar role at Papi Steak, which Grutman and friend David Einhorn opened in South Beach earlier this month.

Crandall stepped down shortly after New Times reported he'd been spotted in public sporting gear stitched with the logo of the Proud Boys, a fraternal organization of militant Trump supporters that made headlines in 2018 for brawling with antifascist protesters across the nation. The Proud Boys claim to be right-leaning libertarians who support free speech, gun rights, and traditional gender roles. Critics call them a hate group, and for a short time the FBI portrayed them as extremists with white-nationalist ties.

The 45-year-old Grutman, a master marketer, appears to be simultaneously paying it forward while turning the heightened emotions surrounding the issue into hype for his latest project.

Undeniably, Crandall paid a price for his wardrobe predilections. His personal life and financial footing were pushed to the precipice. Once a regular at food festivals and within culinary circles, the tall and lanky chef all but disappeared, deleting his Instagram account and rarely venturing outside his home.

"It was the worst part of my life," Crandall tells New Times. "After I left [Stripsteak], there was a lot of uncertainty. I wasn’t sure how I was going to overcome this — how I was going to move forward with the same level of respect, now also feeling like I was all alone."

Crandall hastens to add that he doesn't consider himself a victim and that he never considered leaving town.

"Miami is my home, and I love this city, more than any other city in the country," he says.

Crandall came to South Florida from Chicago several years ago to oversee the Mandarin Oriental's now-shuttered Azul. He later took over a short-lived South Beach seafood shack before securing a top spot in one of the Fontainebleau's kitchens.

The Proud Boys revelations left much of Miami's culinary community shocked and confused. Many had known Crandall as a hard worker and a good friend. The fact that he and his wife, who is Mexican, recently had their first child, made the link to an anti-immigrant group seem like even more of a contradiction.

"I thought, This is the craziest thing I've ever seen," Grutman says. "For him to have the courage to message me knowing I have a club at the Fontainebleau must've taken a lot. And I think a lot of problems we have in this world come from people not knowing each other, so I wanted to give him a chance to know a couple of Jewish guys."

Next came hours of interviews with Grutman, Einhorn, and members of the Papi Steak staff.

"The team grilled him. We grilled him," says Einhorn, who grew up in an Orthodox Jewish home in Brooklyn. "We sat down with him over and over again looking for anything we could pick up to see if it was true. And all we got was humble and apologetic. Since then, we've been working together for a month, and all I've gotten was humble, embarrassed, and apologetic."

Crandall took his place in the kitchen of a hot spot that's already brimming with celebrities. There, he dishes up traditional steakhouse fare — a 48-ounce porterhouse for two ($149), caesar salad ($19), honey-glazed thick-cut bacon from Proper Sausages ($16) — alongside nods to Einhorn's kosher upbringing. Many of the meats (excluding the bacon, of course) are kosher, which aim to please a crowd that Einhorn says "will eat out but won't eat meat if it's not kosher." Other menu items include latkes with crème fraîche, house-made applesauce and chives ($18), Wagyu pastrami ($58), and chicken schnitzel ($32).
A month into his new job, Crandall, who spent his time away from the kitchen obsessed with how to get back into one, says he's concentrating on consistently executing the basics to perfection.

"Escoffier once said that amongst the orchestra of the kitchen, the saucier is the soloist," he adds.

Among the ones the crew have nailed are the au poivre sauce — which Crandall describes as a riff on a recipe from the great English chef Marco Pierre White — and the steak Diane sauce, a combination of fond, mushrooms, butter, and brandy flamed onto an unctuous plank of bone marrow ($22).

"It's something we're really proud of," Crandall says. "And we're working with the bone marrow, which people love, and the wow of a tableside preparation."

Papi Steak. 736 First St., Miami Beach; 305-800-7274; papisteak.com.
KEEP MIAMI NEW TIMES FREE... Since we started Miami New Times, it has been defined as the free, independent voice of Miami, and we'd like to keep it that way. With local media under siege, it's more important than ever for us to rally support behind funding our local journalism. You can help by participating in our "I Support" program, allowing us to keep offering readers access to our incisive coverage of local news, food and culture with no paywalls.
Make a one-time donation today for as little as $1.