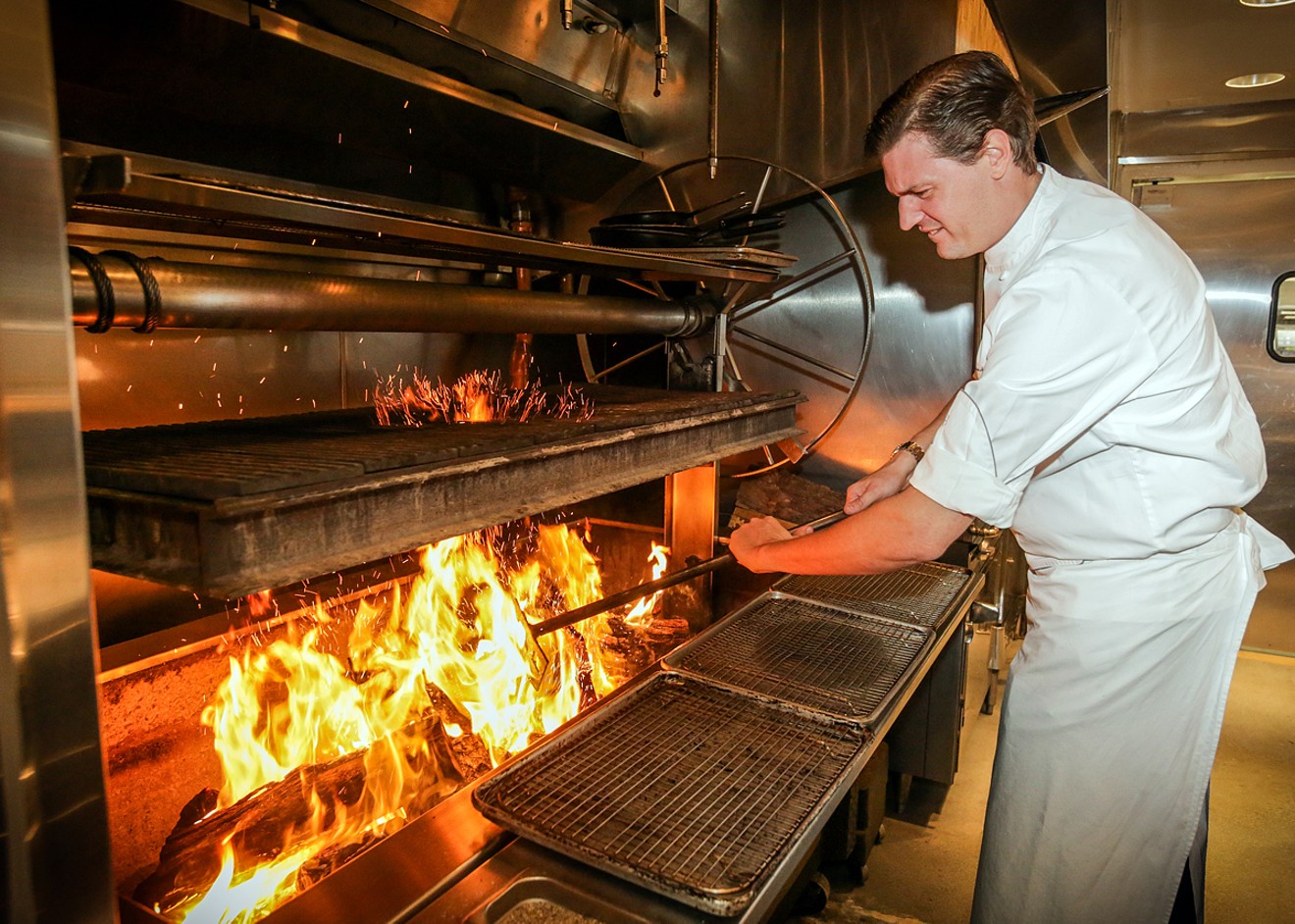 William Crandall Photo by CandaceWest.com
William Crandall, the Miami chef who sparked national controversy after he was seen at a recent food event wearing a shirt bearing the logo of the controversial alt-right Proud Boys, has resigned from his position as chef de cuisine of Stripsteak, celebrity chef Michael Mina's posh steakhouse inside the Fontainebleau Miami Beach, according to hotel spokesman Larry Carrino.

Pressed on the circumstances surrounding Crandall's departure, Carrino said he was authorized to convey nothing more than that the chef had voluntarily resigned. He declined to say whether Crandall's resignation was requested by hotel executives or whether it was due to his recently wearing controversial clothing in public.

Crandall was seen walking through the lobby of the hotel this past Thursday morning and left the property in his vintage convertible around lunchtime.

Neither Crandall nor the hotel's culinary executives responded to requests for comment Friday evening. The resignation follows a Thursday story in which New Times described how Crandall had worn a hat and shirt with a Proud Boys logo last Sunday to Duck Duck Goose, an annual celebration of fowl that wrapped up at the Anderson. "I thought it would be more discreet than wearing a [Make America Great Again] hat," he said. "I'm not a hateful person, and I've never said a hateful thing about anybody in this business. I'm not and I would never support anything homophobic, Islamophobic, xenophobic, or anything that promotes hate." The Proud Boys have brawled with anti-fascist protesters, encouraged political violence, and been labeled a hate group by the Southern Poverty Law Center. (The Proud Boys sued the center for defamation.)

In a message to New Times, Tyler Givens, a cook who works at Stripsteak under Crandall, described chaos in the restaurant and hotel following the release of the story. "The person I worked under was crucified," Givens wrote. There's "hysteria, guilt by association, an empty restaurant, a staff that doesn't want to work for a racist, people not applying."

In addition to being seen at the recent event in a black polo with yellow trim bearing the Libertarian group's initials, Crandall also posted a picture of himself wearing a hat with the Proud Boys initials in a now-deleted Instagram post on his account, which was made private sometime following the release of yesterday's story.

Will Crandall wore the hat to an event, so it isn't as if he was caught wearing it in his backyard. Also, one doesn't just pick up a Proud Boys had on the street, you have to order it online. Fuck this guy.

Miami's restaurant community, of which Crandall has been a prominent member since running the now-shuttered Azul at the Mandarin Oriental, was split on the matter. Many were angry he had worn the clothing. Others who've known Crandall for years said that although he's known to be among the seemingly few conservatives in the culinary community, he's never acted in any way that aligns with the Proud Boys' statements or actions.

Jose Mendin of Pubbelly and La Placita said Crandall, whom he's known for nearly a decade, has always been a family man and a respected part of Miami's food community. "He's a stand-up guy. I don't think he's supporting any group like that." Mendin pointed out that Crandall is married to a Mexican woman and they share a child. He also noted Crandall "shouldn't have worn that shirt."

Coyo Taco's Scott Linquist said he thinks Crandall is a good chef who made a mistake by wearing the Proud Boys attire. He added that chefs should stick to making the best possible food and showing the best hospitality. "I think it is a really bad idea to take a political stance, no matter what side you're on," Linquist said. "I think he knows he made a serious miscalculation, but I also think that there are social-justice warriors willing to take people down. It's kind of a scary thing these days."
KEEP MIAMI NEW TIMES FREE... Since we started Miami New Times, it has been defined as the free, independent voice of Miami, and we'd like to keep it that way. With local media under siege, it's more important than ever for us to rally support behind funding our local journalism. You can help by participating in our "I Support" program, allowing us to keep offering readers access to our incisive coverage of local news, food and culture with no paywalls.
Make a one-time donation today for as little as $1.