Wynwood Is Getting a Sports Bar With Cocktails Served in Sneakers 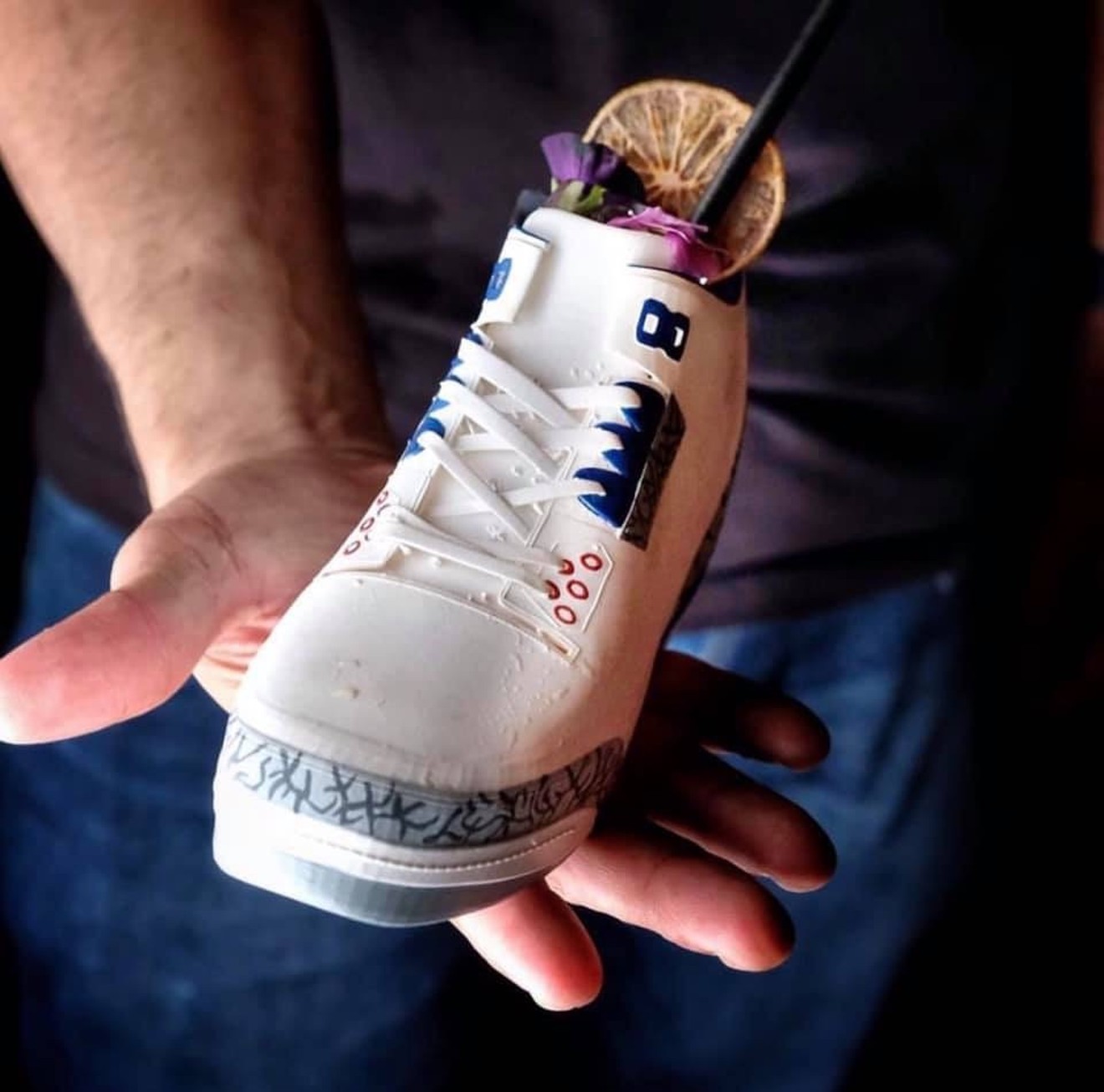 This cocktail will do more than satisfy your soul. Photo by Andrea Lorena
Think Niketown meets your favorite bar: Colorful sneakers perfectly match the colors of your favorite sports team playing on dozens of TV screens. Beer in hand, you cheer your team to victory at your new favorite spot.

Grails Sports Bar will be Wynwood’s first and only sports bar when it opens in mid-August — just in time for football season.

The space is owned and operated by Oscar Ortega, Hector Acevedo, Eddie Fuentes, and Manuel Picon, the four men behind the Cocktail Cartel and Grails’ sister restaurant, Spanglish.

“For us, opening a sports bar in Wynwood is important,” Ortega says, “but at the same time, Grails will be a sports bar that has a sneaker theme to it, so we’re determined to do it right.”

Ortega describes Grails as a “modern take on the traditional sports bar.” The spot doesn't necessarily pay homage to famous athletes, but rather to sneaker culture. “If you see a shoe and it makes your heart skip a beat, Grails Sports Bar is the place for you,” he says.

The space will offer seating for about 70 indoors, about 120 in the covered outdoor space, and, when the Miami weather permits, about 100 people outside. “We have enough wall space outside to potentially create our own version of a mini Wynwood Walls,” Ortega says. The bar will also offer a smartphone app for guests to play with their food and to interact with the outdoor murals.

The decor will differ depending upon where you stand. Inside, the theme is a bit more Chicago Bulls/Michael Jordan-inspired, but when guests walk out back, the colors are very much Miami, with bright teals and sharp magentas.

Grails gets its name from the term used to describe something out of reach or hard to come by, or, as Fuentes puts it, “something that you covet your entire life.” The rise of sneaker culture can be credited to former NBA superstar Michael Jordan. “At the time Jordans were coming out, they represented greatness,” Fuentes says in awe. “No one was doing what he was doing both on and off the court, so you saw him flying and thought it had to be the shoes.”

Fuentes is credited for turning everyone on the Cocktail Cartel team into sneaker fanatics. “I told them not to start collecting,” he jokes. “It’s a little bit of an addiction.” 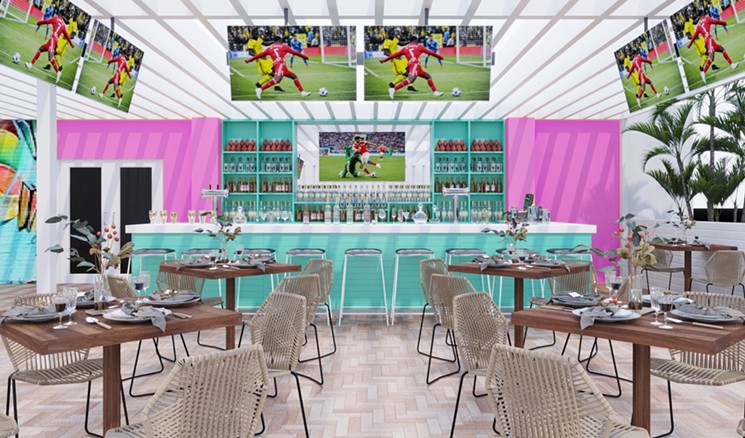 Outdoor rendering with Miami-inspired decor.
Photo by Grails
As the four men sit in their temporary office space on the second floor of the future bar, all sport Jordans — except Fuentes. He explains it’s because he's wearing shorts. "And I don’t pair high-top Jordans with shorts — I just don’t," he says.

“Grails is going to be a place that’s open to everyone to either learn about the sneaker culture or for those already in it to feel at home,” Fuentes adds. He promises there will be plenty of Easter eggs for his fellow sneaker enthusiasts. “When you know, you know.”

When it comes to the libations, it’s all about speed: Half of the cocktails will be prebatched and served on tap.

The star of the drink menu will be the Satisfy Your Sole, served in a custom-made ceramic sneaker. In addition, they will offer a Grails version of a Moscow mule, made with guava, plus a frosé made with homemade ginger beer and strawberries.

Of course, it wouldn’t be a sports bar without beer. Staying true to the team's roots, Ortega promises every beer on tap will come from a local brewery. “We’re working with Beat Culture Brewery, M.I.A. Beer Company, and Tripping Animals Brewing Co., to name a few.”

The Cocktail Cartel is once again tapping the talents of Eating House’s Giorgio Rapicavoli to head the kitchen and will offer elevated bar food. “The vision behind the menu for Grails will have some sneaker influence, but mainly it’s about creating an atmosphere with more properly sourced ingredients,” Rapicavoli explains.

“Yes, we’ll have chicken wings, but it’ll be pasture-raised chicken,” the Chopped champion continues. “Yes, we’ll have a burger, but it’s going to be good-quality Angus, and the buns will be made locally. And, yes, there’s going to be Buffalo sauce, but more than likely we’ll be fermenting the hot sauce ourselves in the back.”

At the end of the day, the chef says, it’s all about representing Miami. “This is a very Miami brand, we’re Miami people, so we’re going to try to work with as many local Miami companies as possible.”

The Grails guys hope to offer limited-sneaker releases or collaborate with shoe brands, but they won’t be selling any off-the-rack gear. As of now, however, they are planning an event for Art Basel 2019 and will throw a party or two in celebration of Super Bowl LIV next February.

Grails Sports Bar. 2808 N. Miami Ave., Miami; instagram.com/grailssportsbar. Opening August 2019.
KEEP MIAMI NEW TIMES FREE... Since we started Miami New Times, it has been defined as the free, independent voice of Miami, and we'd like to keep it that way. With local media under siege, it's more important than ever for us to rally support behind funding our local journalism. You can help by participating in our "I Support" program, allowing us to keep offering readers access to our incisive coverage of local news, food and culture with no paywalls.
Make a one-time donation today for as little as $1.