Can't Get Reservations at Carbone? Make Their Rigatoni Alla Vodka at Home! 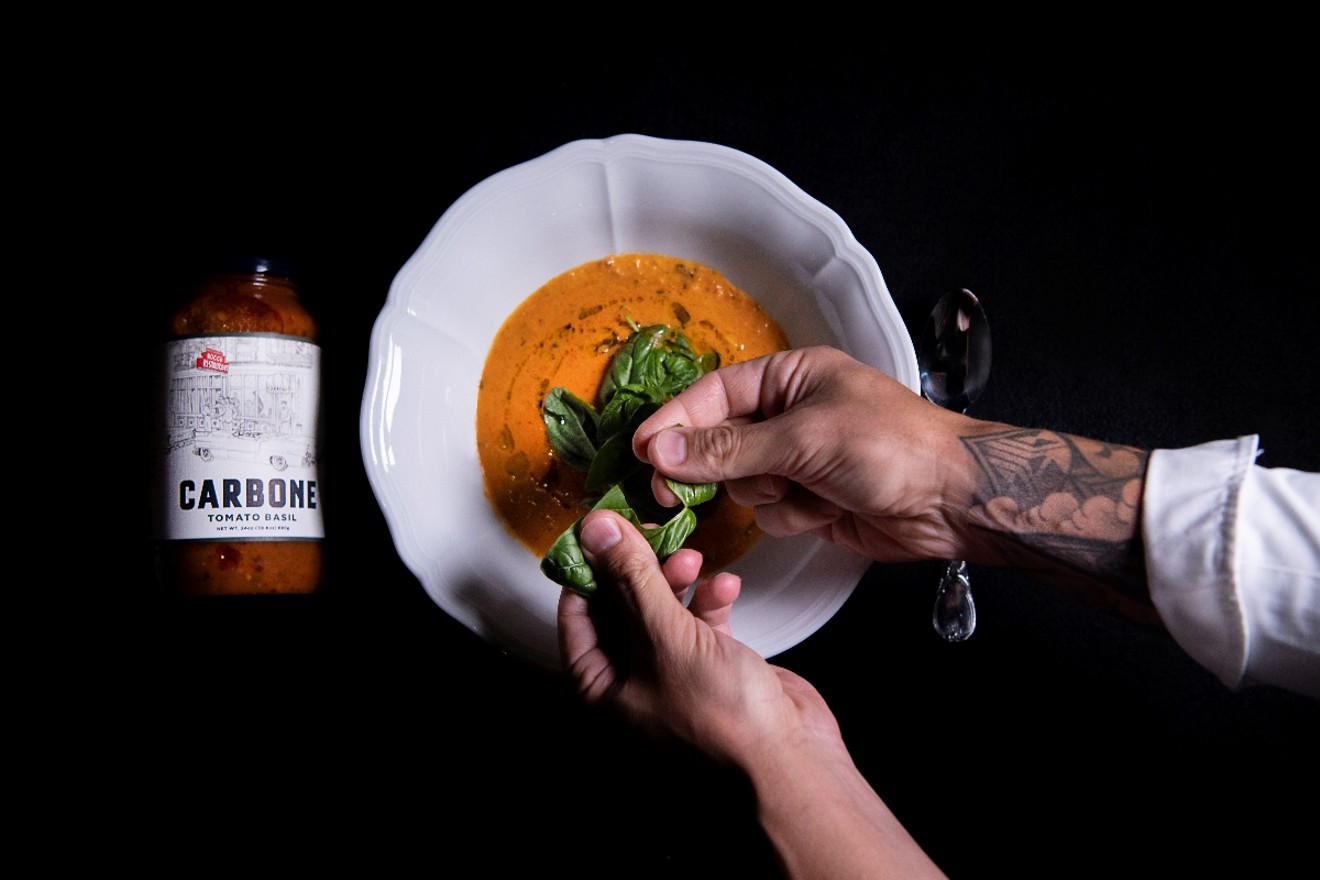 It helps that the pasta dish is both pretty and deliciously satisfying. The pasta is toothsome, the sauce nigh perfect. Calabrian chili peppers put a sexy little tingle on your lips, while the cream in the sauce keeps things from getting out of hand.

If you want to get your hands on a plate of Carbone's rigatoni, you must make reservations in advance. And, while the restaurant isn't impossible to get into, a quick perusal of available reservations shows that you're likely going to have to eat dinner super early or very late.

Or you can make Carbone's rigatoni alla vodka at home — or a damn close version, at least.

Mario Carbone and partners recently released a trio of jarred sauces that are, frankly, delicious. The sauces, which come in tomato basil, marinara, and arrabbiata, are made with a few simple ingredients.

The sauces are available on the Carbone Fine Food website for $40 a four-pack, and at Milam's Market locations throughout Miami.

Carbone tells New Times that he and his partners always wanted to make a jarred sauce that lived up to the flavor profile of the sauces at his restaurants, one that would be true to his Italian-American upbringing. "In so many places around the world, jarred sauce is an essential part of modern life," he says.

Each batch takes more than an hour to make, unlike many mass-produced sauces that "simply mix tomato paste with dehydrated ingredients in a process lasting only eight minutes," Carbone scoffs.

Carbone, who is passionate about sourcing ingredients, says he's about to visit the tomato farm where he sources his tomatoes. The chef is in Italy on vacation and will make a detour to the Campania region of Southern Italy to spend a day harvesting the ripe fruit.

While the jarred sauces can't duplicate what you get at the restaurant, the ingredients are extremely similar. "We may not use the jars at Carbone, since we take pride in preparing the sauces daily (and we'd all be out of a job). But the whole point is that they are extremely close."

Good sauce is only half of a pasta dish. Carbone says using the right pasta is just as important. Though Carbone Fine Foods doesn't sell pasta, the chef suggests seeking out a premium, bronze-died variety. Setaro is one example, says Carbone. "It's a durum-wheat semolina noodle produced in Naples since the 1930s."

Carbone adds that if your local specialty store doesn't sell it, the pasta can be ordered online.

If you want to re-create Carbone's rigatoni alla vodka, Mario Carbone isn't going to give away the recipe — but he will give you a hint.

"A close rendition of our vodka sauce can be made by using Carbone arrabiata sauce, soft-cooked white onions, reduced heavy cream, and a tiny amount of whole butter."

He explains that, although he shares a number of recipes for other dishes on the Carbone Fine Food site, the spicy rigatoni alla vodka is really meant to be enjoyed in person, on Carbone's premises.

"I'm sure clever folks will find ways to replicate it if they really need their fix," he admits.
KEEP MIAMI NEW TIMES FREE... Since we started Miami New Times, it has been defined as the free, independent voice of Miami, and we'd like to keep it that way. With local media under siege, it's more important than ever for us to rally support behind funding our local journalism. You can help by participating in our "I Support" program, allowing us to keep offering readers access to our incisive coverage of local news, food and culture with no paywalls.
Make a one-time donation today for as little as $1.