The Ten Best Key Lime Pies in the Florida Keys 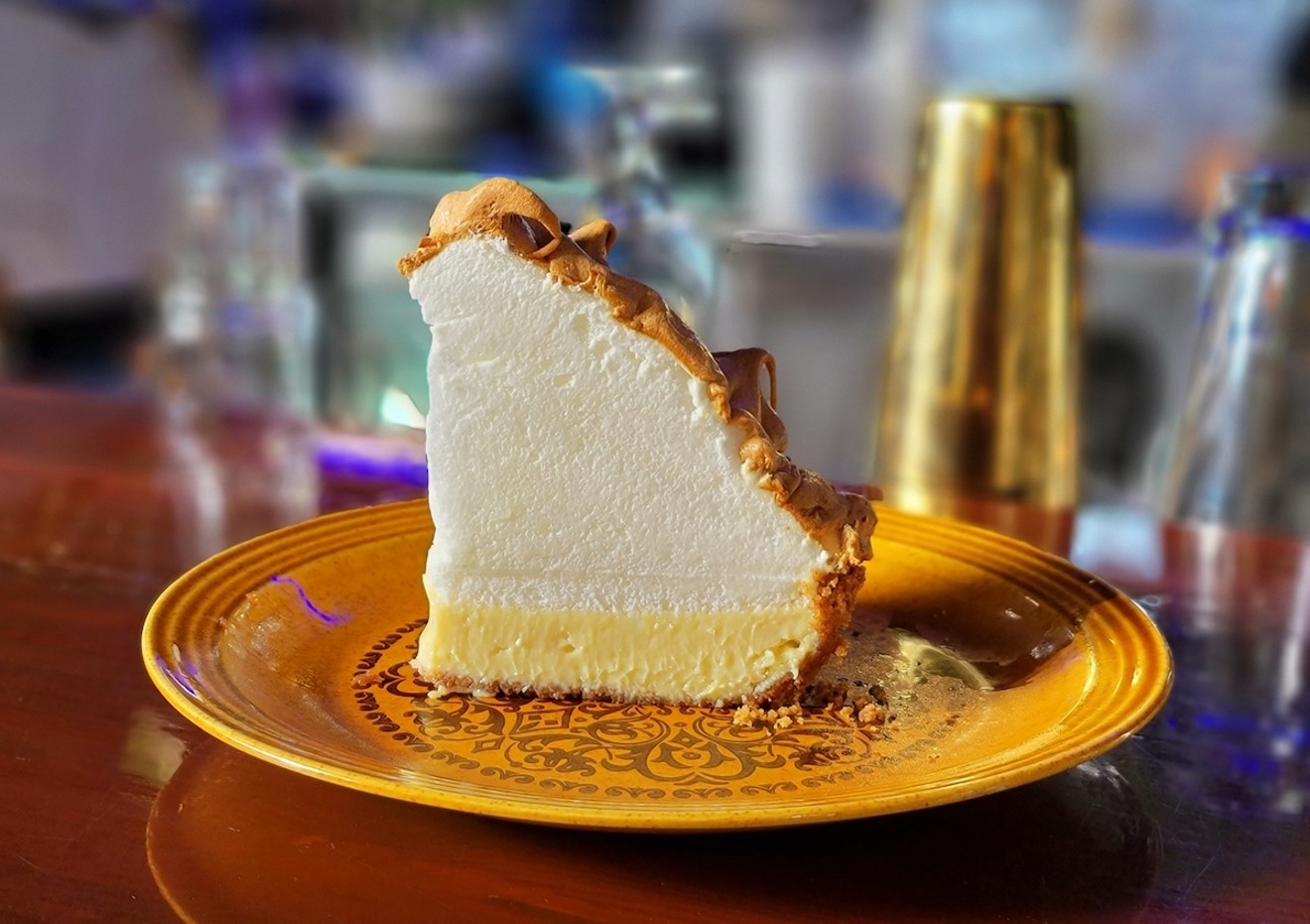 A sky-high meringue sets Salute's slice apart from all the rest. Photo by Daniel Molsberry
Nearly every major city or vacation destination in the United States lays claim to an iconic dish. In Chicago, it's deep-dish. In Philadelphia, it's cheesesteak. In Texas, it's brisket.

Named for the small citrus fruit said to have been introduced in the area in the 1830s by Henry Perrine, a botanist and diplomat who discovered the plant in Mexico, this tart and creamy dessert can be found on nearly every menu in the Sunshine State.

One telltale element that separates the key lime pie contenders apart from the pretenders: real key lime juice, squeezed from the fruit. Smaller than the Persian and Tahitian limes commonly sold in U.S. grocery stores, the key lime is distinguishable from its yellow-green rind and its intensely flavored tartness.

Finding real key limes in South Florida isn't always easy, because the crop struggles to flourish here. Still, most restaurants from Key Largo to Key West insist on using only the real deal, and they make some of the tastiest key lime pies you'll find anywhere.

Below, in alphabetical order, is New Times' list of the ten best key lime pies in the Florida Keys. 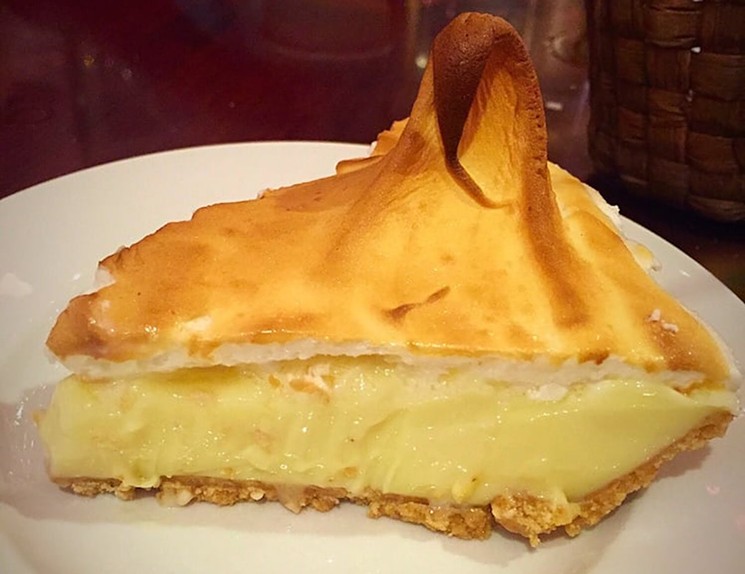 102401 Overseas Hwy., Key Largo
305-451-4665
fishhouse.com
Anyone who visits the Keys more than a few times develops their own special traditions of where to stop for breakfast, lunch, or a few cold drinks. For many Miamians, that includes a visit to Key Largo's Fish House. Here, the key lime pie ($7 a slice) boasts a light and tangy filling, but it's the meringue that makes the dessert a true winner. Rather than an imposing pile of fluff, a sheet of sweet goodness is whipped into perfect curls and torched to a gorgeous caramel brown. Buy a whole pie to-go for $20 and you'll have plenty of that Islamorada key lime goodness to share (or not) with family and friends. 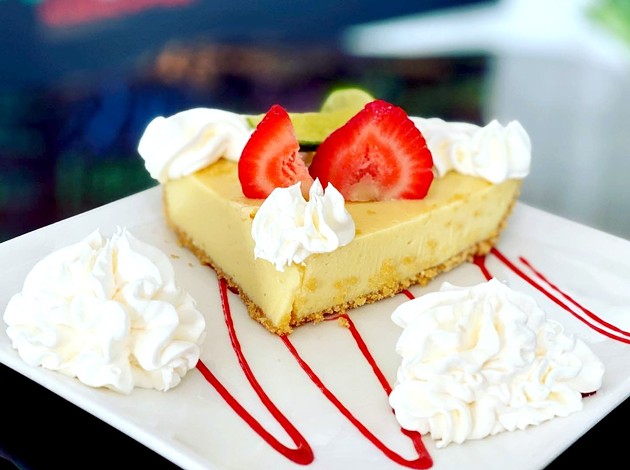 The Green Turtle Inn has been dishing up its key lime pie for decades.
Photo by Nicole Danna

81219 Overseas Hwy., Islamorada
305-664-2006
greenturtleinn.com
You'll know the Green Turtle Inn when you see it, thanks to the giant glowing green turtle that hovers above this roadside spot off the Overseas Highway. Today, the restaurant is best known for its Southern-style charm and dishes like its signature turtle chowder, which the inn has been serving for decades. And there's also the key lime pie ($8 a slice). This version features a crust made with macadamia nuts and Rice Krispies that contrasts nicely with the sweet-tart filling. 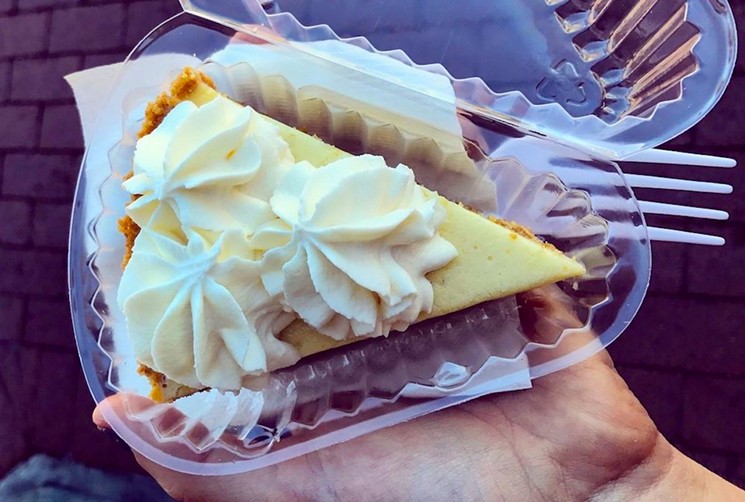 200 Elizabeth St., Key West
305-296-0806
keylimeshop.com
For more than two decades, Kermit's has been serving some of the finest key lime pie, courtesy of Kermit Carpenter. The store, which Carpenter founded with his sister Anita and her husband, has become a Key West brand and expanded to a second shop, located on iconic Duval Street. A slice of Kermit's pie is tart and rich, thanks to real key limes and a graham-cracker crust. Don't miss Carpenter's brilliant invention: a frozen slice skewered on a stick and dipped in dark Belgian chocolate. Kermit's will deliver a fresh key lime pie to your door overnight and also offers strawberry and coconut flavors, or a gluten-free version ($39 and up). 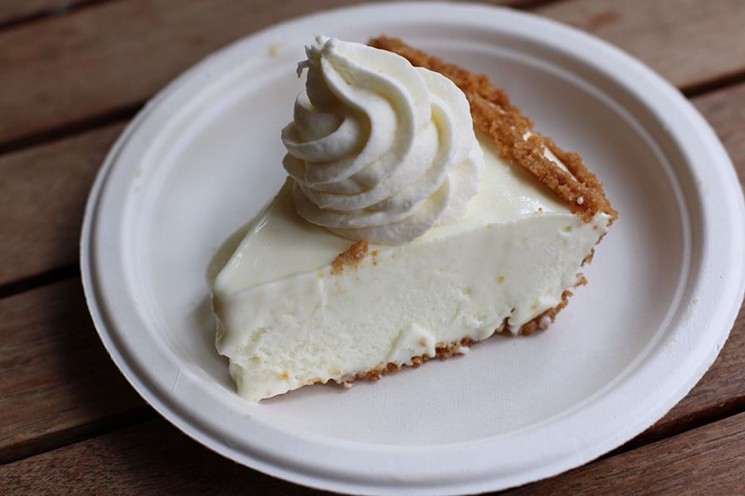 511 Greene St., Key West
305-517-6720
keywestkeylimepieco.com
At the height of the season, you might have to stand in line for a slice of key lime pie ($6.50) here, but it's worth the wait. These renowned pies, made fresh daily, boast a filling that's light and smooth, with just the right touch of sweetness and a perfect ratio of creamy filling to crunchy graham-cracker crust. If you're hankering for a pie but can't make the drive to Key West, you can order online ($25; $27 for a gluten-free version). 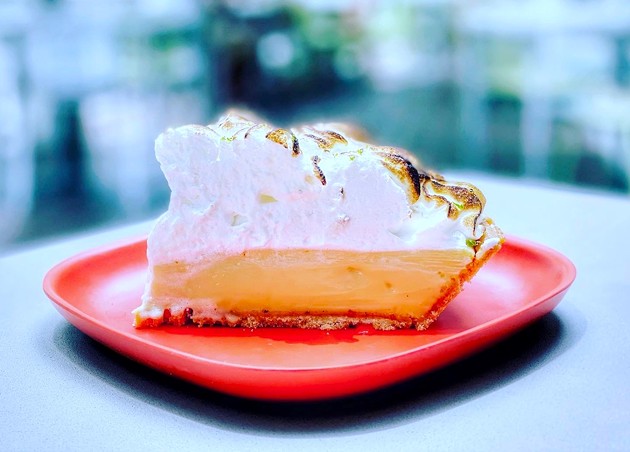 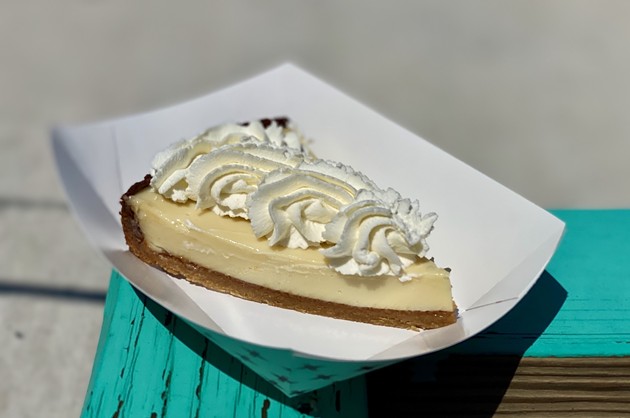 Old Town Bakery's no-frills key lime pie is among the Key West has to offer.
Photo by Nicole Danna

930 Eaton St., Key West
305-396-7450
oldtownbakerykeywest.com
Established in 2010, Old Town Bakery looks like it's been around a lot longer. The aesthetic is thanks to owner Niall Bowen and his wife, Elzbieta Krysztofiak, who've decorated the shop to exude Old Florida charm. Bowen, a longtime pastry chef, makes a dense, beautiful, yellowish-green custard in a gingersnap crust — a flavor that pairs exceptionally well with the tartness of the limes. Each slice ($3.75) is topped with fresh whipped cream made in-house just before serving. 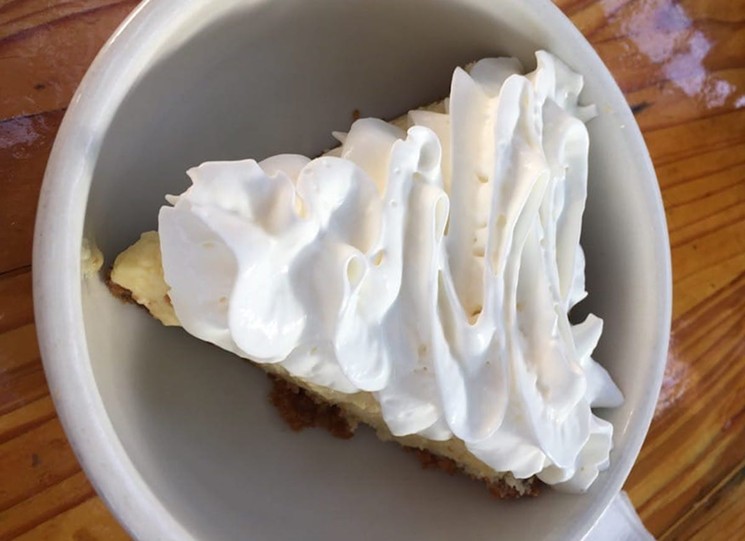 806 Caroline St., Key West
305-294-7192
pepescafe.net
Established in 1909, Pepe's has a sign boasting that it's the oldest eating house in Key West, so it only makes sense it also serves some of the best traditional key lime pie around ($7.50). More than a century later, the desserts continue to be handmade, and the key lime pie is the most notable. Served in a bowl, a zingy filling in a crunchy graham cracker crust is crowned with plenty of whipped cream and a lime wedge for garnish. The old-school charm of the place adds the perfect touch of sweetness. 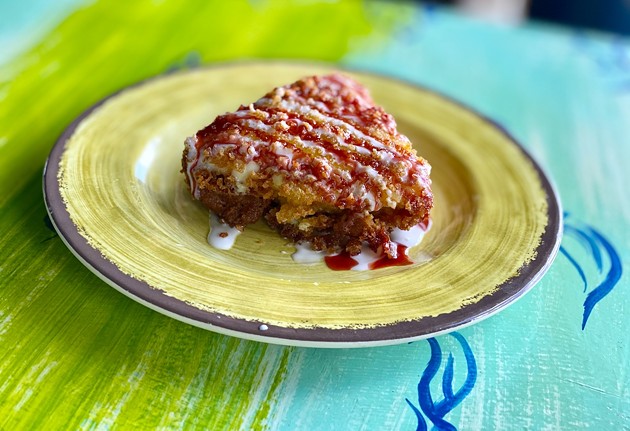 1410 Overseas Hwy., Marathon
305-289-2065
porkysbaysidebbq.com
Who said key lime pie has to be traditional? At this Marathon restaurant, the slices are deep-fried. The product arrives completely encased in a warm, crisp crust that offers the perfect touch of crispy-crunchy texture, topped off with a creamy, raspberry-and-vanilla drizzle. It all gives way to the pie's subtly sweet, creamy filling — a key lime experience that's unlike any other ($7). 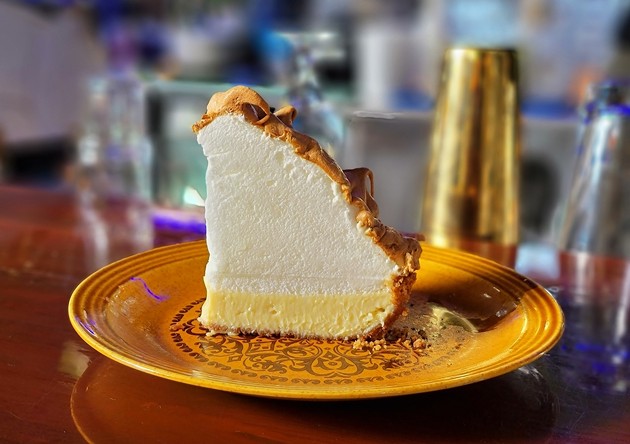 A sky-high meringue sets Salute's slice apart from all the rest.
Photo by Daniel Molsberry

Salute! on the Beach

1000 Atlantic Blvd., Key West
305-292-1117
saluteonthebeach.com
Most people know about the key lime pie at this restaurant's sister establishment, Blue Heaven. But Salute! on the Beach is a Key West treasure all on its own, with the atmosphere of a beachside café and, yes, delicious key lime pie. The menu offers Caribbean-influenced takes on Italian classics, although you won't find anything Italian about the slice of key lime pie ($10). The creamy key lime custard is nestled in a rich graham cracker crust and topped with a majestic crown of fluffy meringue. 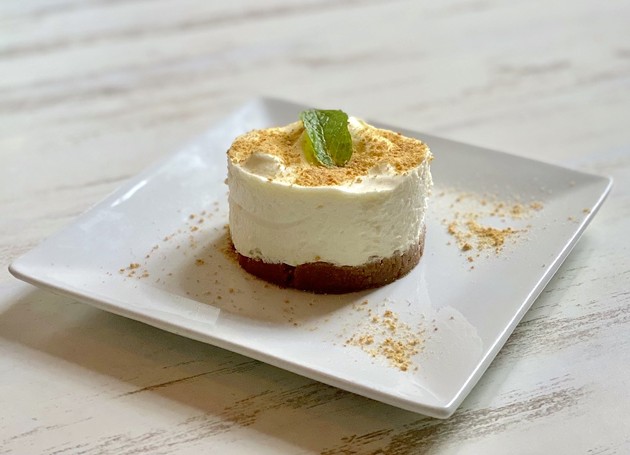 Sarabeth's key lime pie is a cylindrical take on the traditional dessert.
Photo by Nicole Danna

530 Simonton St., Key West
305-293-8181
sarabethskw.com
At Sarabeth's, you'll find another not-so-traditional take on key lime pie. Rather than execute a tweak on the traditional slice, Sarabeth's creates a mini masterpiece ($8). There's no denying it's key lime pie, however.  All the boxes check, from the tangy, not-too-sweet custard to the graham cracker crust and whipped, meringue-style topping. The only problem: It's almost too pretty to devour. Almost.
KEEP MIAMI NEW TIMES FREE... Since we started Miami New Times, it has been defined as the free, independent voice of Miami, and we'd like to keep it that way. With local media under siege, it's more important than ever for us to rally support behind funding our local journalism. You can help by participating in our "I Support" program, allowing us to keep offering readers access to our incisive coverage of local news, food and culture with no paywalls.
Make a one-time donation today for as little as $1.