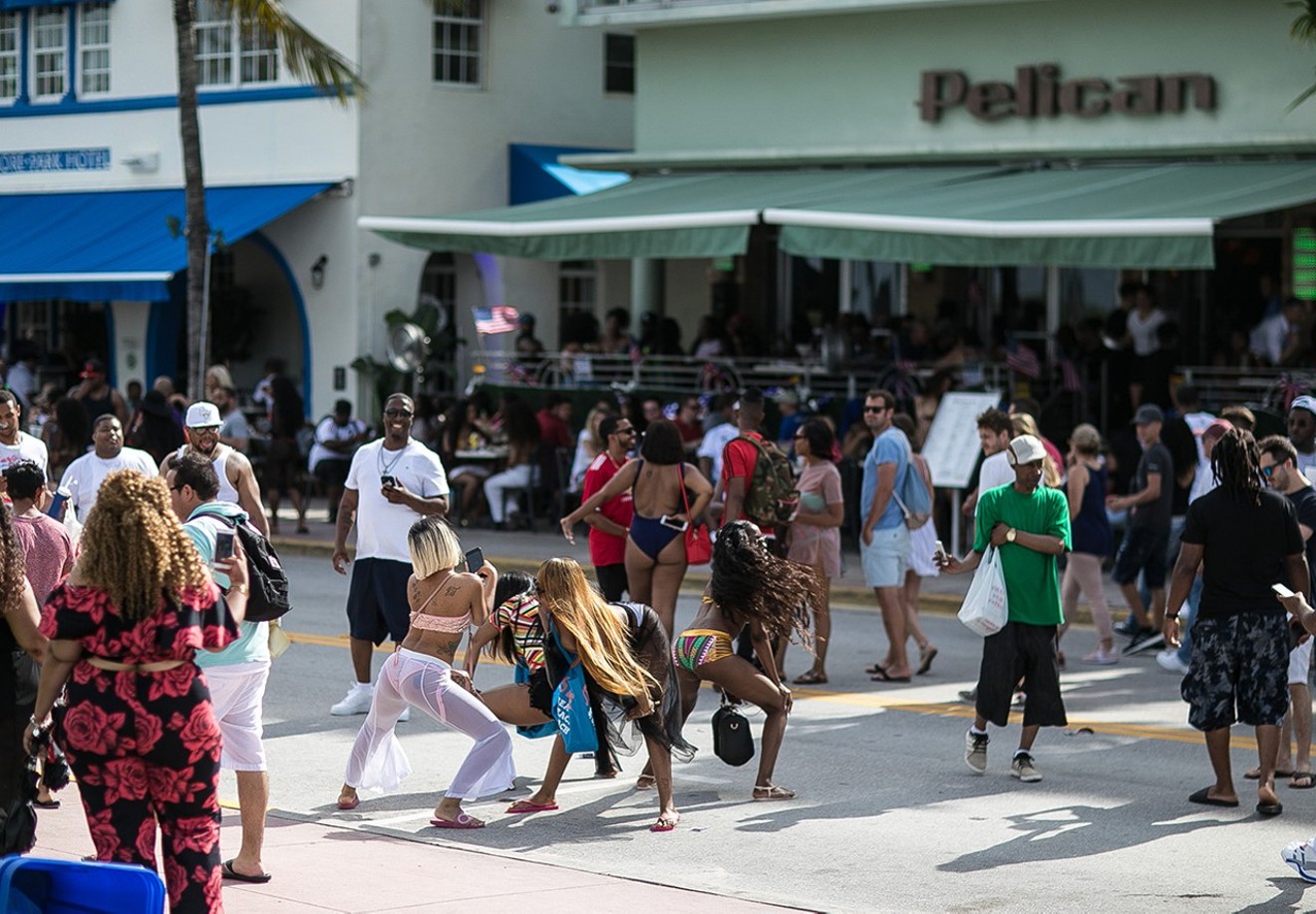 “In front of our place, there’s a line of cops constantly flashing their lights,” said David Strout, 34, who came down from Asheville, North Carolina, with his fiancée Hillary for the weekend. “You begin to loosen up; then you get a buzzkill from four cops looking at you.”

The couple is white, but Hillary said the police presence "felt a little racist." She said she regularly attends music festivals but had never seen police officers like this.

The Sunday of Urban Beach Week, one of the few local events geared toward black residents and tourists, went off yesterday despite every effort to kill it. Despite smaller crowds, the Best of the Best concert was held in Wynwood without a major hitch, somebody stole an unmarked cop car and dumped it on South Beach, and traffic yet again was somehow worse than anyone could have logically expected.

In fact, authorities didn't make it any easier. Last year, Miami Beach banned coolers and speakers on the sand. This year, the city set up license-plate readers made by a firm whose parent companies shares data with Immigration and Customs Enforcement. After two men were fatally shot last year — one by police — Miami Beach Commissioner Kristen Rosen Gonzalez wrote in an email that the city needs to “give cops their bullets back, remove their body cams, give them their dignity.”

Nineteen-year-old Cody Robbins, who is white, was visiting this weekend from Orlando to see the beach. He attended Miami Beach Gay Pride in April and returned Saturday night, when it took him an hour to get from his hotel in downtown Miami to South Beach. “There were police officers [at Pride], but not on this level,” he said. “They didn’t shut down the roads like this."

George Martinez
Nineteen-year-old Britnee English, who is black and from Detroit, said she was having the time of her life. "I wanted to see what Urban Beach Week is all about," she said. The police actually made her feel safe, but she wishes she had known they were setting up DUI checkpoints and scanning license plates. “If they’re gonna do that, they need to do that every weekend,” English said, “not just a particular weekend.”

Twenty-two-year-old Trevor Lee, who is white, came from Wisconsin to celebrate his college graduation. He said that the increased police presence is a good thing and that he enjoys feeling safe. “If they didn’t think there was a need for police, there wouldn’t be police,” he said, adding he thinks scanning people’s license plates is “fair game to do.”

This year, police were also enforcing an ordinance that prohibits cars from playing “unreasonably loud music.” Miami Beach Police Chief Dan Oates said in April that violators would be given one warning and then they would be arrested. As of Monday, 111 people had been arrested since Thursday evening on the Beach. One person was cited for loud noise.

A city spokesperson told New Times the noise ordinance was meant to cut down on spring break parties, not Memorial Day specifically. But because there's no metric for noise complaints, the NAACP warned in a letter last week that enforcement could result in police unfairly targeting black revelers.

Chelsea Flint, who 26 years old and black, drove down from West Palm Beach for the 11th-annual Memorial Weekend Comedy Festival. She said it felt like the police didn't understand that people who were paying for hotels had to navigate the area. "Why are you making me cross the street?" she said. "It makes me not want to come back because of the hassle.... I know I won't be back next year."

One woman, who said she didn't want to be identified because she didn't want her "name out there," said it feels like she’s in school and has to be on her best behavior.  “I’m black, so — I mean, look behind you,” she said, gesturing to a troop of five officers biking down the sidewalk at Lummus Park.

About ten minutes later, that troop arrested a woman who was black for misdemeanor marijuana possession. Her boyfriend, Raoul Rodriguez, said it felt unfair because it seemed like police weren't stoping other folks who were smoking pot along the sidewalk. (Indeed, there was plenty of marijuana being smoked.) The cops threatened to arrest him too for raising his voice to speak to his girlfriend even though she was about 15 feet away.

In 2015, the city passed an ordinance that would give officers the option to issue a $100 citation instead of making an arrest for a misdemeanor amount of marijuana, about 20 grams or less. A month after the city passed that law, Oates said he would still instruct officers to arrest and criminally charge anyone openly smoking — the woman was rolling a blunt. This past weekend, 35 people were arrested for misdemeanor amounts of marijuana.

Police arrest a woman Sunday afternoon for possession of marijuana.
Molly Minta
Chicagoans Vernon Mems, 49, and Eranstine White, 48, were at the park when the arrest happened. Earlier in the day, while he and White sat under a $200 rental canopy, Mems, who is black, said he had been wondering why there were officers on every block. After learning it was Urban Beach Week, he realized it all made sense. “It makes us feel unwanted,” he said. “And we’re bringing the money!”

Even though he feels like it’s unfair, Mems said the police aren’t a deterrent. “We’re coming down here to enjoy ourselves, to relax,” he said. “Hopefully, we’ll have a better experience next time.”
KEEP MIAMI NEW TIMES FREE... Since we started Miami New Times, it has been defined as the free, independent voice of Miami, and we'd like to keep it that way. With local media under siege, it's more important than ever for us to rally support behind funding our local journalism. You can help by participating in our "I Support" program, allowing us to keep offering readers access to our incisive coverage of local news, food and culture with no paywalls.
Make a one-time donation today for as little as $1.