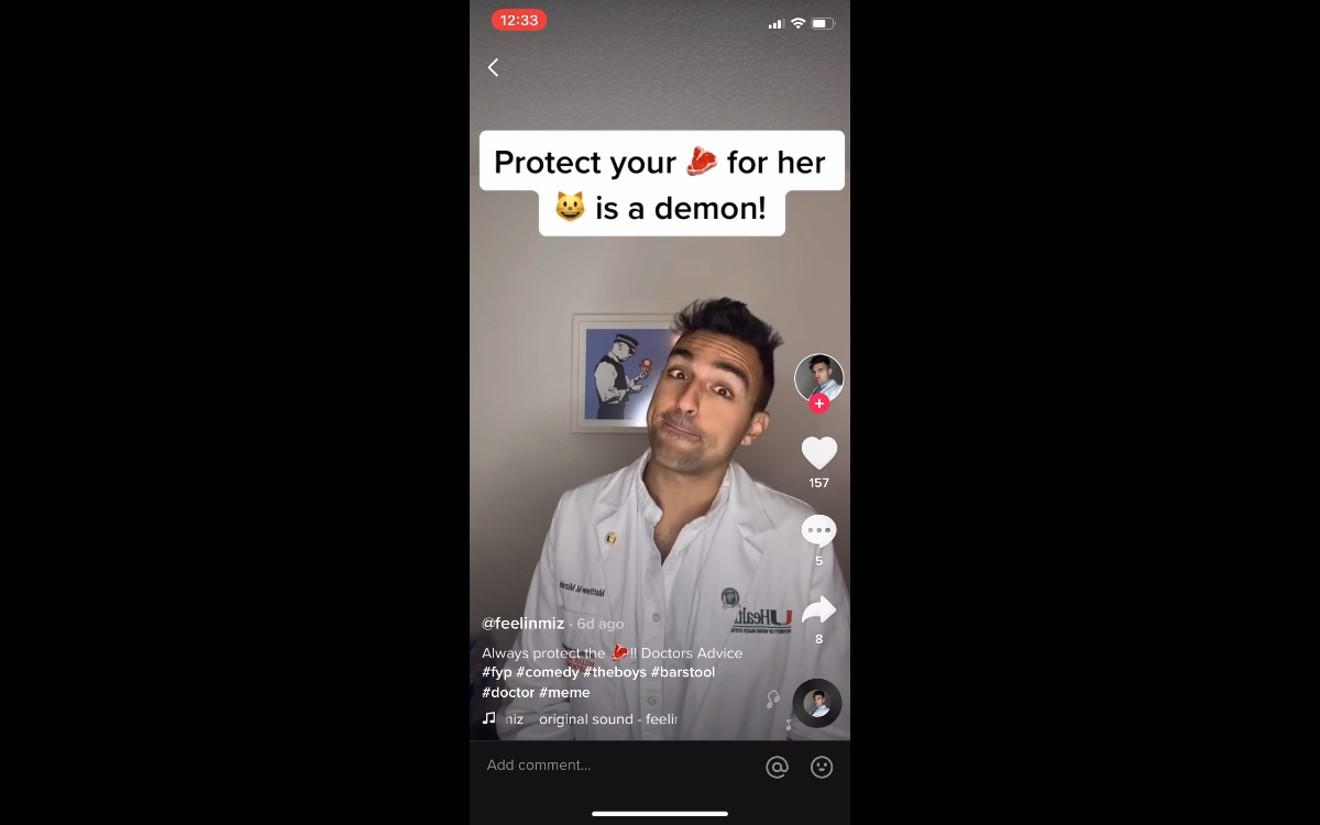 The University of Miami says videos by former med school student Matthew Mizrahi do not represent the school's values. Screenshot via TikTok
A recent TikTok video starts off the way many of them do: With a young woman in a neon-green bathing suit dancing to Lady Gaga's 2008 smash hit "Poker Face" as part of a choreographed dance challenge.

After a few seconds, the clip abruptly cuts to a man in a white doctor's coat who hastily greets the viewer and presents a question: "How many necklaces does she have on?"

The sound of the Jeopardy! countdown plays in the background until the guy in the white coat provides the answer.

"If you said three, great job. Otherwise, though, you know, I've just gotta diagnose you with horniness," he says. "A lot of guys have it, you'll be OK."

Then, he reveals the girl's age as the punch line: "But uh, also, she's like 17." The video cuts to a black screen, where the words "congratulations pp you played yourself" are displayed.

Matthew Mizrahi — who calls himself the "CEO of dropping out of Med School" — has more than 5,000 followers and 176,000 likes on TikTok, the short-form video platform where virtually anyone can go viral with a single post. In many of the videos on his account, @feelinmiz, Mizrahi wears a white doctor's coat featuring a UHealth logo and stitching that reads "University of Miami Miller School of Medicine." Adorning the coat is a circular gold pin embellished with the distinctive "U" and another silver pin representing the Cushing Society, one of the 15 academic societies on campus.

In his bio, Mizrahi invites TikTok users to follow him "for free doctors notes." But a number of the videos he posts are filled with cringe-worthy "jokes" that rely on misogynistic stereotypes of women. One clip encourages men to "beat your [meat emoji]" before texting a woman because "if you still want to text her... she's the one." Another asserts that if a woman "beats your mental but not your [meat emoji]" that "perhaps, she belongs on the street." In a third, Mizrahi advises that if a woman "argues to get even," a man should "protect your [meat emoji] for her [cat emoji] is a demon!"

In just a few days, the videos garnered hundreds of thousands of views and elicited mixed reactions among students at all three University of Miami campuses. Comments left on the videos include sentiments such as, "UM deserves you." Mizrahi replied: "Broooo. The deans that called yesterday after seeing this TikTok account were not happy."

Only a few days after the comments were exchanged on June 12, all of the videos featuring Mizrahi wearing the Miller School white coat were deleted. Students at the medical school received an email on June 16 from senior associate dean Alex J. Mechaber saying the school was aware of Mizrahi's account and actively working to have his posts removed.

"The University of Miami Miller School of Medicine does not condone or tolerate any statement or conduct that is derogatory, demeaning or prejudicial toward any group of people or individuals. We are aware of the misogynistic comments recently posted on social media and have taken swift and decisive action against the responsible person," Mechaber wrote. "These statements do not represent the standards of the Miller School or the medical profession in any way."

Mizrahi did not respond to an email from New Times sent to his University of Miami email address nor to a direct message on Instagram.

According to Mizrahi's LinkedIn page, he started at the Miller School of Medicine in 2016. Lisa Worley, a spokesperson for the school, told New Times he is no longer enrolled as a student.

Worley's statement confirmed another comment left by Mizrahi on a video posted June 9. When a user asked if Mizrahi's bio was "accurate about med school," Mizrahi responded, "Yes it is fam. Went to the U, took a leave of absence to start a record label."

Although the videos where Mizrahi wears the Miller School white coat were taken down, he has continued to make doctor-themed content for his account. In one of the newer videos, Mizrahi wears a different white coat, with no embellishment other than two generic pins, while a written message scrolls above his head: "If you provide her with a shoulder to cry on, shoulder surgeons say this can become a [eggplant emoji] to ride on!"

Despite his branding as a UM med student, all indications are that Mizrahi has left Miami. According to his LinkedIn profile, he is living in West Hollywood, attending the UCLA Anderson School of Management, and running 1st Gen, a record label he co-founded that focuses on young artists.
KEEP MIAMI NEW TIMES FREE... Since we started Miami New Times, it has been defined as the free, independent voice of Miami, and we'd like to keep it that way. With local media under siege, it's more important than ever for us to rally support behind funding our local journalism. You can help by participating in our "I Support" program, allowing us to keep offering readers access to our incisive coverage of local news, food and culture with no paywalls.
Make a one-time donation today for as little as $1.