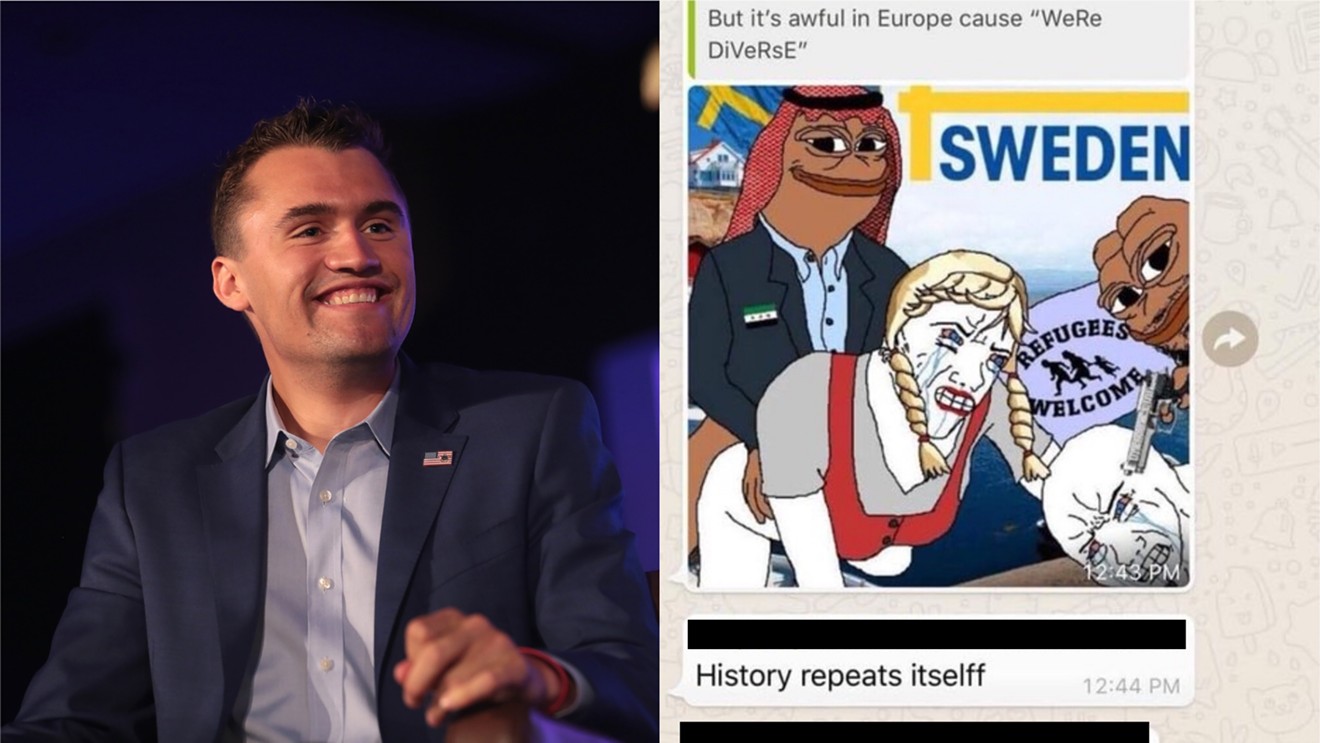 Spencer is, of course, an avowed white nationalist who regularly quotes Nazi slogans and advocates the creation of a "white ethno-state."

TPUSA FIU
Representatives for the group did not return messages from New Times yesterday. (A Facebook message was "read.") Nor did the group's regional field director in Florida, Driena Sixto, respond to New Times. She also participated in the chats, the WhatsApp screencaps show.

Turning Point USA was founded in 2012 by square-headed right-wing commentator Charlie Kirk. Kirk has since brought on pundit Candace Owens and has repeatedly held events with Donald Trump Jr. (One was held last week at Nova High School in Davie, but Trump Jr. wound up not attending.) Trump Jr. also wrote the foreword to Kirk's recently released book. (Kirk's text has received uniformly negative reviews — even from other conservatives). But TPUSA is perhaps most famous for the antics of its Kent State University chapter — in 2017, TPUSA activists at the Ohio school wore adult diapers and sucked pacifiers to parody "crybaby" liberals.

Of course, the internet has made fun of the group's members nonstop ever since then for making themselves look like morons.

Although Kirk and TPUSA formally denounce racism, white nationalism, and the alt-right, lower-level TPUSA members keep getting outed as racists or fans of prominent neo-Nazis. In 2017, the New Yorker's Jane Mayer reported the group had possibly coordinated illegally with prominent conservative campaigns and had also "fostered an atmosphere that is hostile to minorities." The magazine obtained internal screenshots showing former national field director, Crystal Clanton, stating "I hate black people. Like fuck them all... I hate blacks. End of story.” The Huffington Post also reported that TPUSA replaced Clanton with a woman named Shialee Grooman, who has used all kinds of racial and homophobic slurs online (including the N-word) and once tweeted the sentence "I love making racist jokes."

And, earlier this year, the head of Turning Point's diaper-wearing Kent State chapter quit — and wrote in a scathing op-ed that one of TPUSA's regional managers was "liking tweets from notorious Charlottesville attendee and white nationalist icon, James Allsup." (For what it's worth, many political commentators, from Leftists to even the staunchly conservative National Review, blame campus-conservative groups for functioning as alt-right breeding-grounds.)

Much of the FIU Turning Point chat reads like a bunch of young idiots trying (and miserably failing) to sound tough and edgy to impress one another. A source with knowledge of the FIU chat said that the "TPUSA FIU Fun" chatroom is used to announce the group's meetings and official business, while also serving as an outlet for group members to talk about campus life and share jokes and memes. But it turns out many members find some pretty heinous stuff funny.

Most notably, one user shared a Pepe the Frog meme showing Syrian men raping a white, Swedish woman at gunpoint. The "joke," if it can be called that, was simply that Sweden is letting in too many Syrian refugees, and that the Syrian men are going to pay the Swedes back by raping their women. It's basically about the Swedes getting literally "cucked."

"But it's awful in Europe cause 'WeRe DiVeRsE," the poster wrote, using ~ironic~ punctuation to poke fun at the concept of diversity. 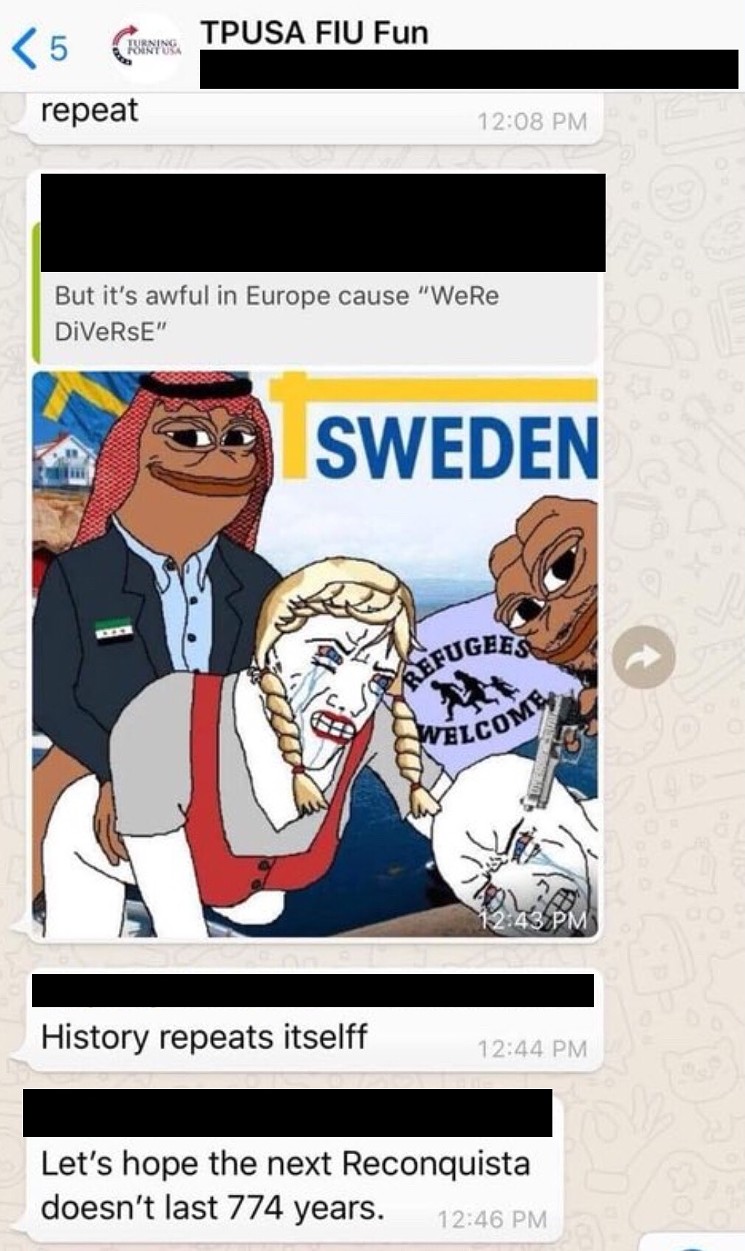 TPUSA FIU
(In right-wing internet parlance, Pepe the Frog is a meme character popular with internet neo-Nazis, and the term "cucked," which comes from "cuckolding," references white people letting nonwhites infect their culture. It's as gross and racist as it sounds.)

Another user then referenced the period from roughly 718 to 1492 when white Christians violently pushed Muslims and Arabs out of the Iberian peninsula in what is now Spain.

"Let's hope the next Reconquista doesn't last 774 years," the user wrote. The term — which translates to "reconquest" — is often referenced in white-nationalist and neo-Nazi circles online.

In another part of the chat, a different user made a blunt joke about deporting brown women as part of a Halloween costume.

"I want to dress like an ICE officer in assless chaps" and "aggressively grapple Latinas and deport them," the post read, even though some members of the group appear to identify as Latina. 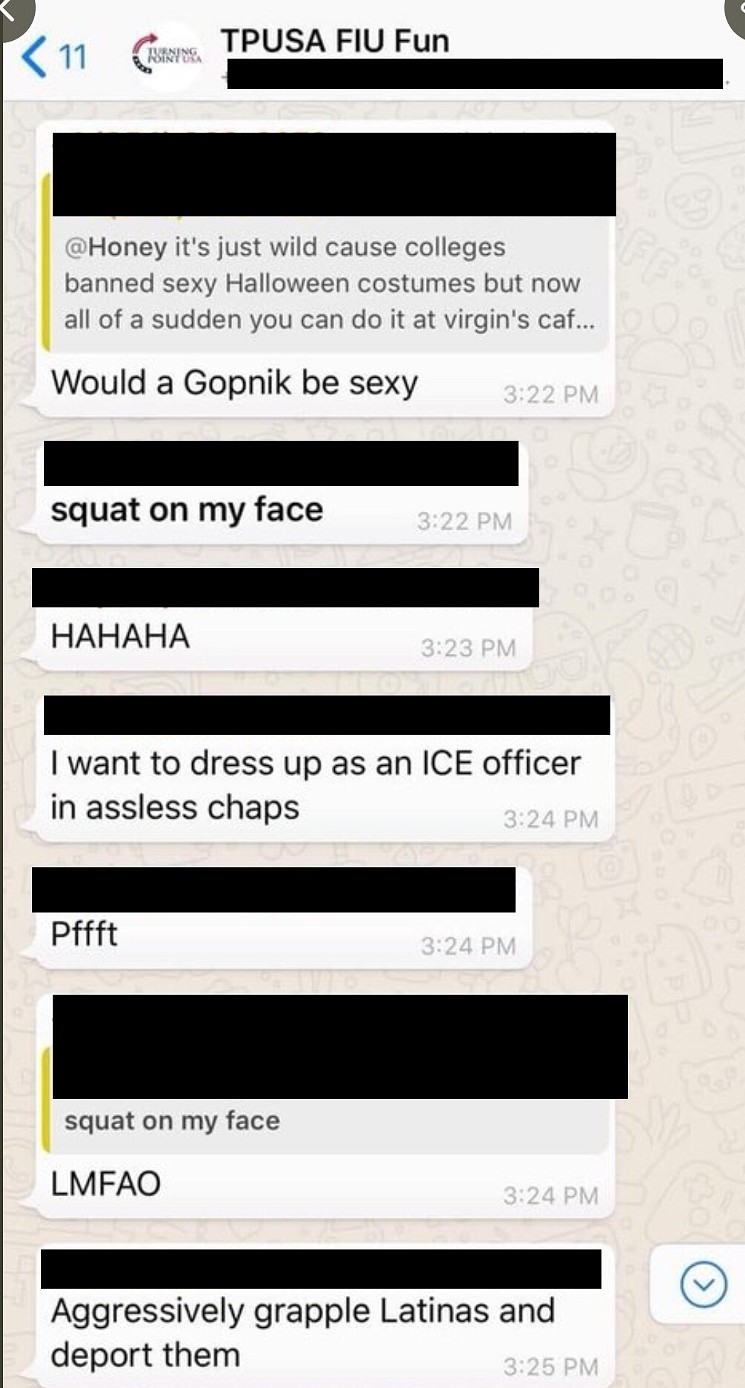 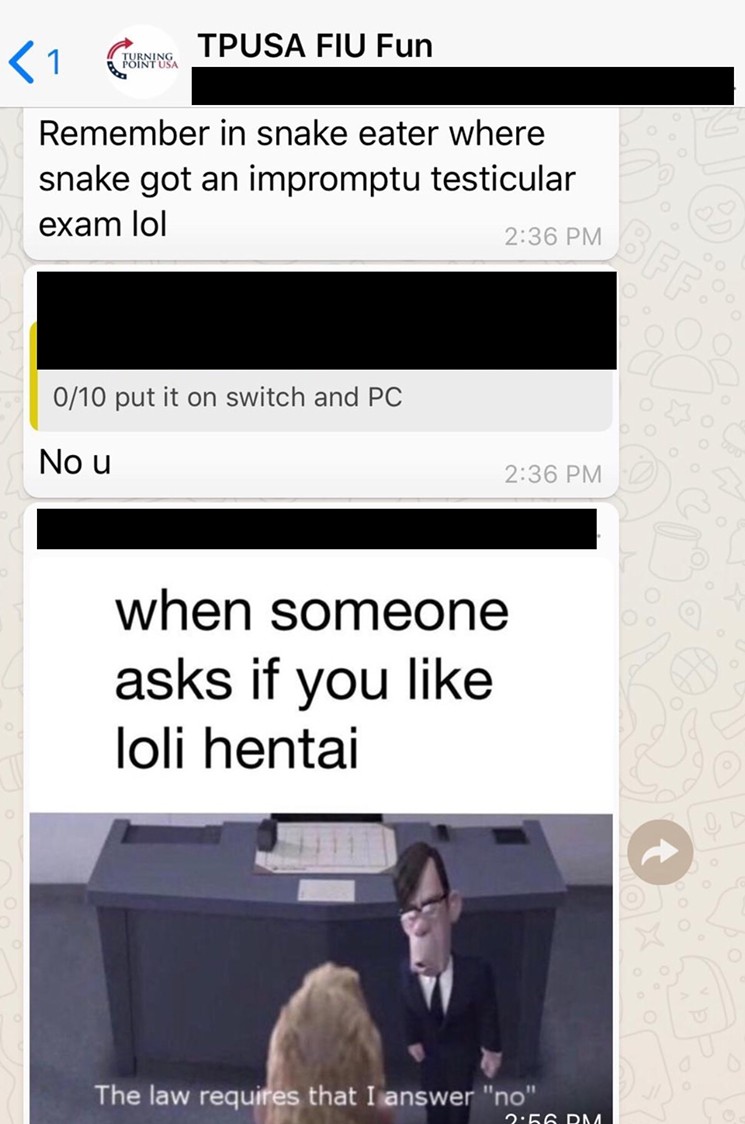 TPUSA FIU
Other chats showed TPUSA chat members joking about "infiltrating" other groups on campus, especially leftist or progressive organizations. One user joked about trying to get a progressive campus activist expelled.

According to FIU's own college magazine, PantherNOW, TPUSA created a chapter at the school in 2017. Field rep Driena Sixto, who had already graduated from the school by then, told the paper she had helped bring Turning Point to FIU to change the allegedly "liberal narrative" on college campuses. (It's worth noting that data show the alleged "anti-conservative crisis" at colleges appears to be overblown, and that, if anything, leftist professors actually get "persecuted" more often than right-leaning ones.)

An FIU spokesperson declined to immediately comment on the posts. But, during a similar controversy with the Campus Republicans, the university stressed racist-murder jokes did "not represent the university community."
KEEP MIAMI NEW TIMES FREE... Since we started Miami New Times, it has been defined as the free, independent voice of Miami, and we'd like to keep it that way. With local media under siege, it's more important than ever for us to rally support behind funding our local journalism. You can help by participating in our "I Support" program, allowing us to keep offering readers access to our incisive coverage of local news, food and culture with no paywalls.
Make a one-time donation today for as little as $1.