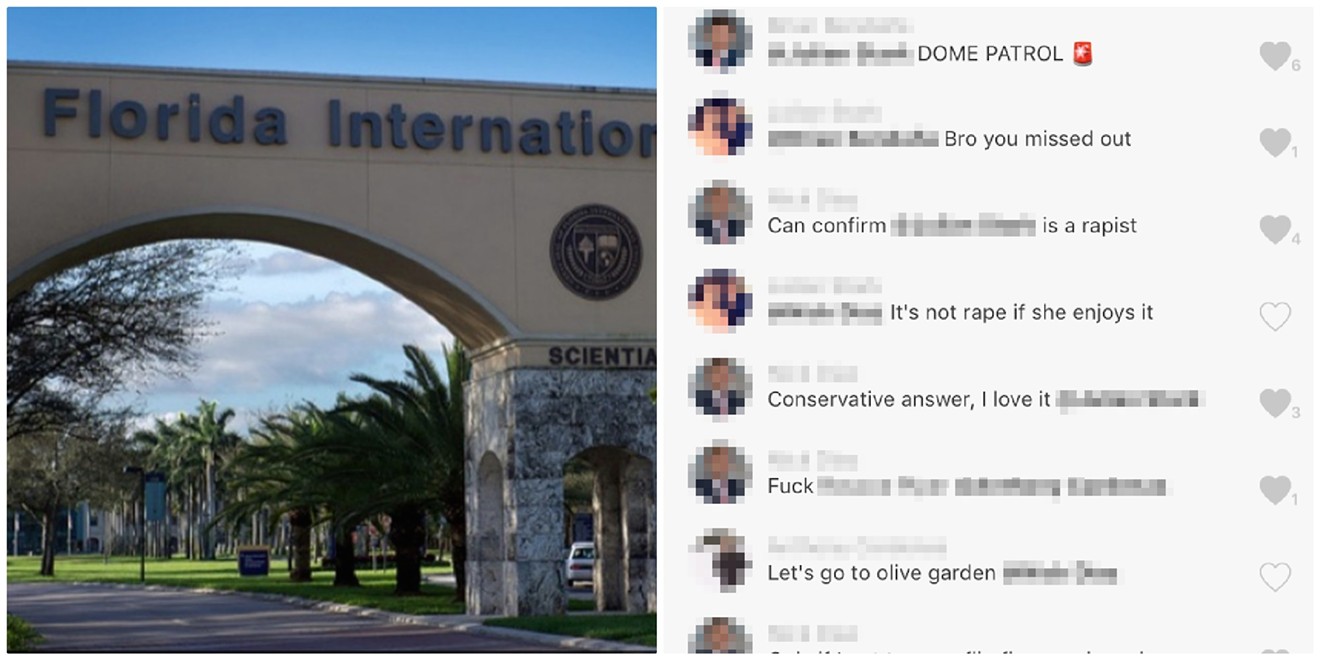 Florida International University / Tau Kappa Epsilon Group Chat
If the Harvey Weinstein case has taught America anything about sexual assault and rape culture, it’s that the Hollywood stories are only the tip of the iceberg. Consider the latest uproar at Florida International University, where someone leaked a fraternity's group chat full of nude photos of female students, derisive messages about a deceased FIU sorority member, and jokes about anti-Semitism and rape.

The school has launched a full investigation into the fraternity, Tau Kappa Epislon, after the thread was sent in late September to university administrators and the school’s Panhellenic and Interfraternity Councils.

“FIU is aware of the images described in the story and has no tolerance for this type of behavior," says Maydel Santana, a spokeswoman for the school. "We are unable to comment further pending the conclusion of an investigation.”

The thread, which was compiled over the course of a year, was sent by dozens of members of the fraternity at FIU, which has 15 frats and seven sororities on campus. Screenshots shared with New Times show at least 41 frat members (the group has 108) joking about sexual assault and hazing while sharing at least eight explicit photos of female students.

In one series of chats, which were first reported on by FIU journalism student Helen Barreto, the frat members make light of statutory rape and brag about sleeping with underage girls. One member wrote, "[I] wanna feel like a ped," and others call sorority members "sluts." 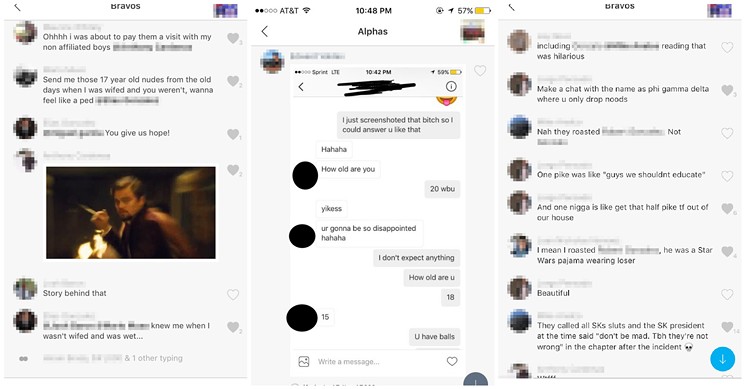 Tau Kappa Epsilon Group Chat
In another series of chats, the members make anti-Semitic jokes and then make light of sexual assault, writing "it's not rape if she enjoys it."

Tau Kappa Epsilon Group Chat
The chats included a round of joking at the expense of Diana Alduncin, a 22-year-old FIU student who died this past summer after falling from a cliff in Greece:

Tau Kappa Epsilon Group Chat
The frat members also joked about getting cocaine and Adderall and even suggested they should sue the university if officials tried to crack down on them:

Tau Kappa Epslon Group Chat
The conversation was meant to be a private chat among fraternity members, but on September 28, someone sent the the whole thread to school administrators and Greek officials and demanded action against the fraternity. The sender said they'd already complained privately to a school official in charge of Greek organizations on campus, who had said the students did not violate the code of conduct.

“According to an email sent by [Christianne] Medrano, the IFC Advisor, FIU Administration says that these members of Tau Kappa Epsilon Fraternity are NOT a violation of the student code of conduct,” the anonymous sender wrote in the email. “If this isn’t a violation then WHAT is?”

FIU has now opened a full-fledged investigation into the frat. Tau Kappa Epsilon’s national organization says it will work with the school.

“Tau Kappa Epsilon and our Sigma-Alpha chapter at FIU are fully cooperating with university officials on their investigation,” the organization says in a statement sent to New Times.

The school's sororities aren't waiting to take action. Six of FIU's seven sororities have already signed an agreement to cease formal association with the chapter for the remainder of the academic year.

But so far, neither the students involved in the chat nor the fraternity have faced any official disciplinary action. This isn't the first time frats at FIU have been a national embarrassment to the school.

In 2013, New Times reported that the university suspended its Pi Kappa Alpha chapter after screenshots from a private Facebook group were leaked, revealing nude images of students and details about the group's rampant drug dealing, referred to as the "Pike pharmacy," along with messages pertaining to hazing and racism.

The Teke group was aware of this incident and even referenced it in its thread as an example of illicit fraternity activity being discovered through private chats, writing that "we can do everything Pike did as long as its not on a chat," seemingly implying that hazing and other banned activity was OK as long as it wasn't documented.