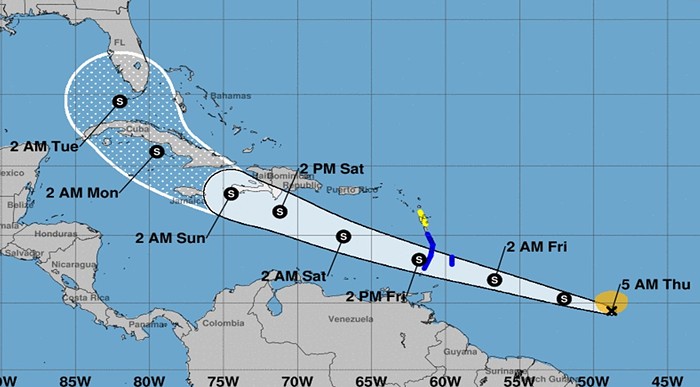 In an advisory this morning, forecasters at the National Weather Service said they expect the storm to move across the Caribbean tomorrow and over the Fourth of July weekend, nearing Cuba late Sunday and into Monday. A tropical storm warning is in effect for Barbados, Martinique, St. Lucia, and St. Vincent.

As of now, it's not certain what impact Elsa might have on South Florida.

Here are the 5 am AST Thursday, July 1 Key Messages for Tropical Storm #Elsa. Tropical Storm Warnings are in effect for Barbados, St. Lucia, Martinique, and St. Vincent and the Grenadines.https://t.co/6zNCsAYIAB pic.twitter.com/o5dA3bP3qV

But even if Miami manages to dodge a direct hit, any additional rainfall or winds could hamper the ongoing search for victims at Champlain Towers South in Surfside. While state and federal authorities have been monitoring several disturbances in the Atlantic and preparing for the possibility of a tropical storm or hurricane, it's hard to imagine the rescue effort could continue in the presence of severe weather. The crews may also have to move some of the heavy machinery they've been using the clear the rubble.

Frank Rollason, Miami-Dade's director of emergency management, told The Weather Channel that plans are already in the works.


"Should a tropical storm or hurricane be forecasted, we will make arrangements for our first responders to be located in a safe location within a sensible time frame to allow them to stop operations and locate their equipment in a safe location," Rollason said yesterday, before Elsa became a named tropical storm. "Once the storm clears and it is once again safe to return to the tasks at hand they would do so. Those safe-harbor plans are being developed as I write this."

Tropical storm winds could also potentially bring down the still-standing portions of Champlain Towers South. Officials at the scene have already expressed concern about the possibility of another collapse, pulling workers off the pile overnight, according to a report this morning in the Miami Herald.

T.J. Lyon, chair of Florida's Statewide Emergency Response Plan, told The Weather Channel that the building's integrity is uncertain in a tropical storm.

"Any bad significant wind could potentially bring down the remaining part of that building," Lyon said.

At a press conference this morning, Gov. Ron DeSantis told reporters the state is monitoring developments with the storm.

"We are not expecting any impact through Saturday, but obviously the state meteorological team is actively monitoring the storm and will continue to provide updates," he said.
KEEP MIAMI NEW TIMES FREE... Since we started Miami New Times, it has been defined as the free, independent voice of Miami, and we'd like to keep it that way. With local media under siege, it's more important than ever for us to rally support behind funding our local journalism. You can help by participating in our "I Support" program, allowing us to keep offering readers access to our incisive coverage of local news, food and culture with no paywalls.
Make a one-time donation today for as little as $1.