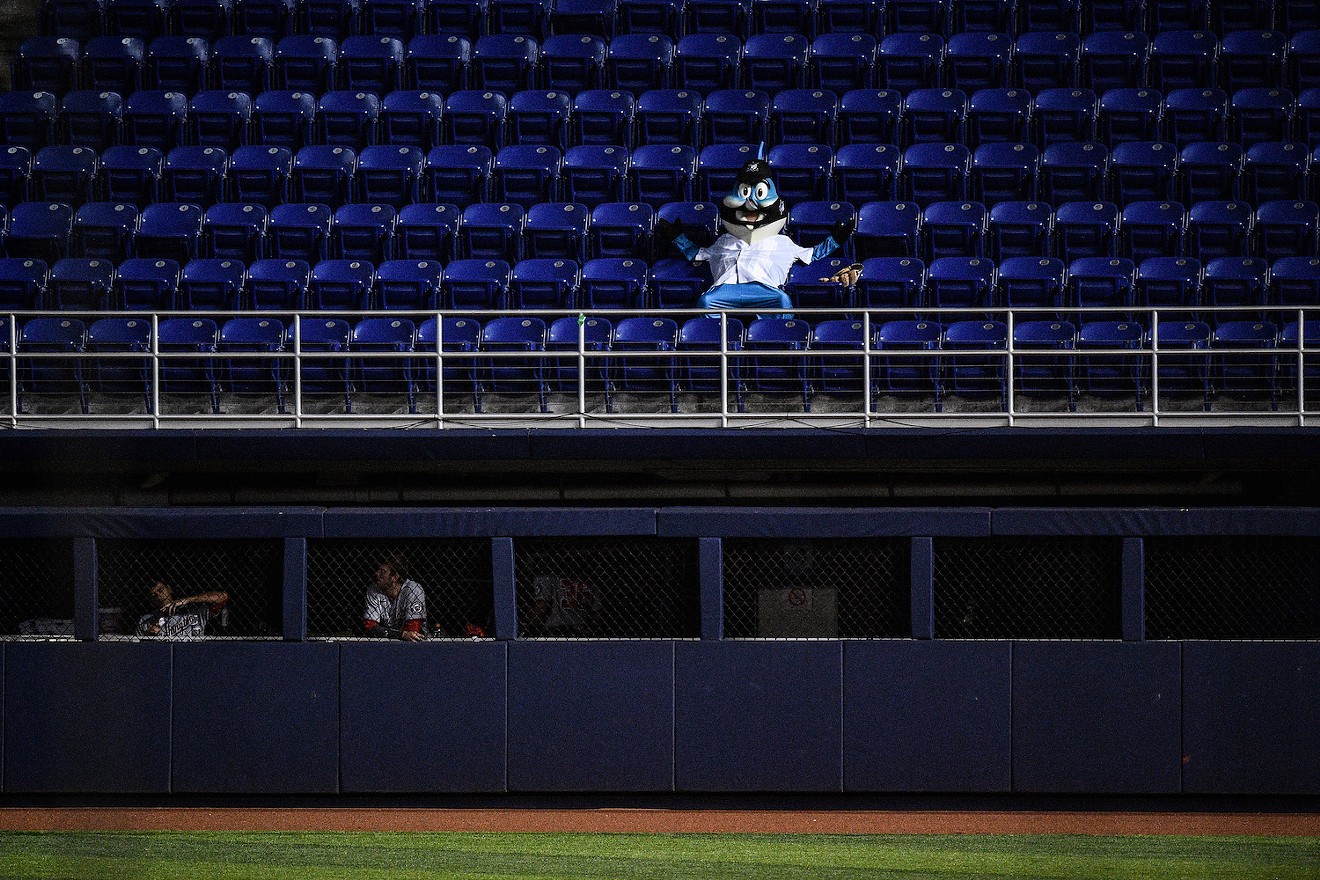 The things he endures for us! Photo by Mark Brown/Getty Images
Everyone loves a good mascot, even the terrifying ones. Their entire existence is predicated on entertaining fans between the entertainment.

In essence, mascots are like a bridge between our youth and the youth of today, and it's time we give them their flowers.

We're proud to present the South Florida Mascot Awards — New Times' way of honoring those brave men and women who endure the subtropical humidity to amuse us, the fans. Unlike our recent research into local coach and manager handsomeness, this ain't no beauty contest. It's about character, dammit!

Sebastian the Ibis
When your résumé includes getting arrested in the line of duty like Sebastian the Ibis' does, you're breathing rarefied air in this category. And don't get us started on those eyes, which positively dare you to eff around and find out.

From the way he throws up 'The U' with the look of someone flipping the double bird to the karate leg kicks and the in-your-face demeanor, Sebastian is likely the one mascot all of Miami would choose to have on their side in a bar fight.

T.D.
In T.D., the Miami Dolphins might have the most athletic mascot of the bunch. And the oddest T.D.'s half-human, half-dolphin manifestation makes you feel as if you're at a frat party where some drunk bro found a horse costume in a closet and is galloping around wearing the head half.

While it's hard to ignore just how unsettling T.D.'s costume is (he clearly doesn't skip leg day), you just know he'd be the life of any party.

Stanley C. Panther
If there is a single South Florida mascot you'd be comfortable hiring to babysit your children on date night, it's the Florida Panthers mascot, Stanley C. Panther. Notwithstanding the blank stare of desperation in Stan's eyes, he truly seems trustworthy, adorable, and, if it came to it, downright adoptable.

While everyone loves mascots, we wouldn't cuddle up in bed with one. Except maybe Stanley C. Panther.

Burnie
If we're judging local mascots purely on which one we'd like to appear at our kid's birthday party, the Miami Heat's Burnie is clearly the winner. Burnie is as likely to bust out a TikTok move the kids love, do a keg stand that riles up the dads, or help the moms put together the bombest butter board.

Burnie is clearly the best mascot in Miami in terms of pure fun. Does he sometimes cross the line? Yes. But who among us, right?

Billy the Marlin
If you're looking for a mascot who has clearly been through some shit and come out the other end of it for the better, look no further than Miami Marlins hypeman Billy the Marlin. From fluctuations in his weight and fashion to possibly aging into his current shrinking-grandpa look, Billy is just out here trying his darnedest, just like the rest of us.

The tribulations life has put Billy the Marlin through don't seem fair (perhaps most notably, having witnessed every Marlins game in franchise history). Few mascots would have the energy, but Billy the Marlin has a family to feed so you can bet he's punching that time clock for this season's March 30 opener against the Mets, the September 23 tilt against the Brewers, and every home game in between.
KEEP MIAMI NEW TIMES FREE... Since we started Miami New Times, it has been defined as the free, independent voice of Miami, and we'd like to keep it that way. With local media under siege, it's more important than ever for us to rally support behind funding our local journalism. You can help by participating in our "I Support" program, allowing us to keep offering readers access to our incisive coverage of local news, food and culture with no paywalls.
Make a one-time donation today for as little as $1.