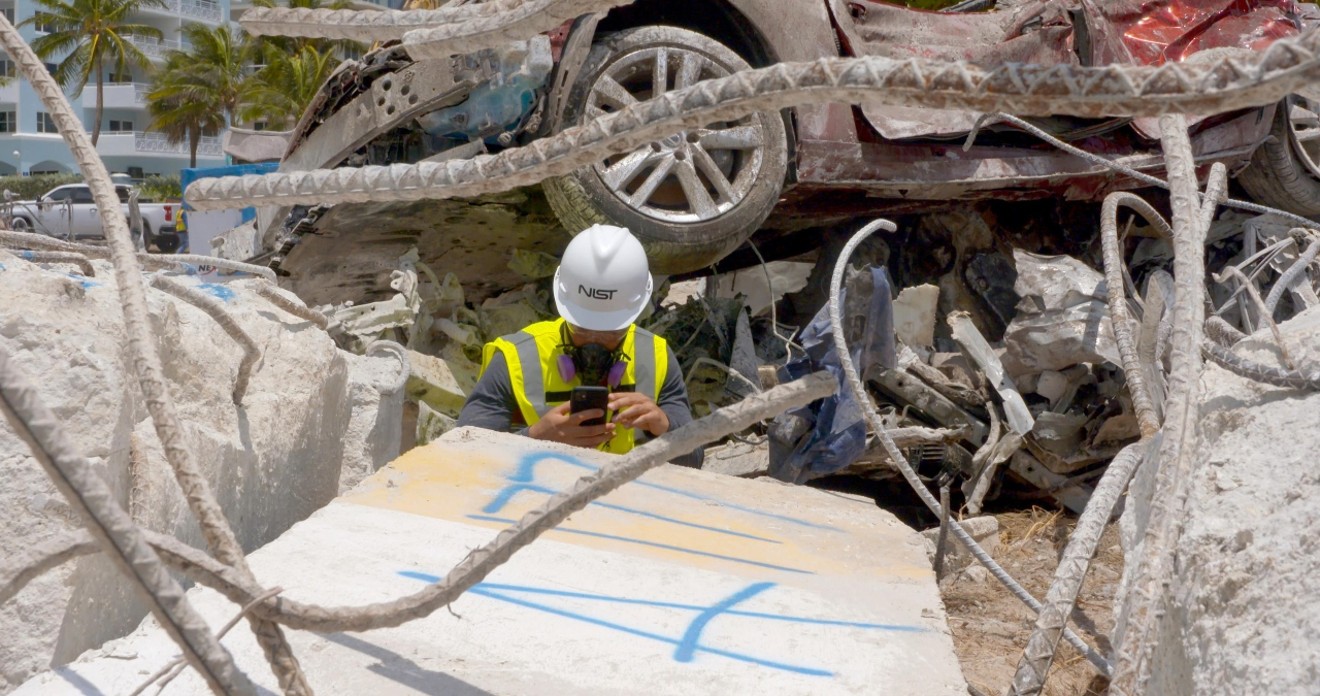 NIST investigators are scrambling to find research space to examine remnants of the collapsed Champlain Towers South building. Photo by National Institute of Standards and Technology (NIST)
The official investigation into the collapse of the Champlain Towers South building in Surfside has been delayed in part because investigators are having trouble finding adequate storage space for their evidence amid a fraught real estate market in Miami.

In an October 19 update on their probe into the condo collapse, investigators with the National Institute of Standards and Technology (NIST) said their investigation has been delayed by about six months.

The first hurdle has been the agency's trouble lining up contracts for investigative work. During a presentation, NIST's lead investigator into the collapse, Judith Mitrani-Reiser, compared the holdup to delays investigators encountered while assessing damage caused by Hurricane Maria, which devastated Puerto Rico in September 2017. It took an average of 12 months for the agency to award work to contractors in connection with NIST's yet-to-be-completed study on the storm.

"We're experiencing some of the very same types of procurement delays in the Champlain Towers South investigation that our partners in Hurricane Maria experienced years ago," Mitrani-Reiser said during the presentation.

Another factor contributing to the delay, Mitrani-Reiser noted, is Miami's "challenging real estate market," which has posed a problem for the agency as it tries to find more research space.

When a class action lawsuit brought by survivors and families of the 98 fatally wounded victims reached a settlement this summer, experts involved in the litigation gave NIST hundreds of concrete and debris samples that had been used as evidence in the case. The agency now has more than 600 pieces of evidence in a secure warehouse in Miami-Dade County.

The problem is that the warehouse doesn't have enough space for scientists to move around or bring in forklifts to examine the pieces of the structure. NIST needs to procure additional room to move forward with its testing.

Finding that extra space has not been easy, NIST says.

Miami-Dade County led the country in highest rent spikes for industrial property as of June, and commercial space is scarce as demand for property outpaces existing supply.

Despite the issues, Mitrani-Reiser and her associate lead investigator, Glenn Bell, said they are optimistic that they'll find new warehouse space soon and that the investigation will proceed smoothly. The latest timeline sees NIST finishing its technical work by April of 2024 and submitting its findings a year later in 2025.

NIST investigators are currently testing more than 24 hypotheses for why the condo tower collapsed but have yet to reveal which ones they find to be the most plausible.

After finishing field testing at the site of the collapse late last month, the agency now plans to conduct further interviews of survivors, family members, building management, and non-governmental organizations. Mitrani-Reiser says the agency is doing these interviews more than a year after the collapse because investigators now have enough data to ask more specific questions and get to the bottom of the building failure.

"We have to get this right. We can leave no stone unturned," Bell said.
KEEP MIAMI NEW TIMES FREE... Since we started Miami New Times, it has been defined as the free, independent voice of Miami, and we'd like to keep it that way. With local media under siege, it's more important than ever for us to rally support behind funding our local journalism. You can help by participating in our "I Support" program, allowing us to keep offering readers access to our incisive coverage of local news, food and culture with no paywalls.
Make a one-time donation today for as little as $1.