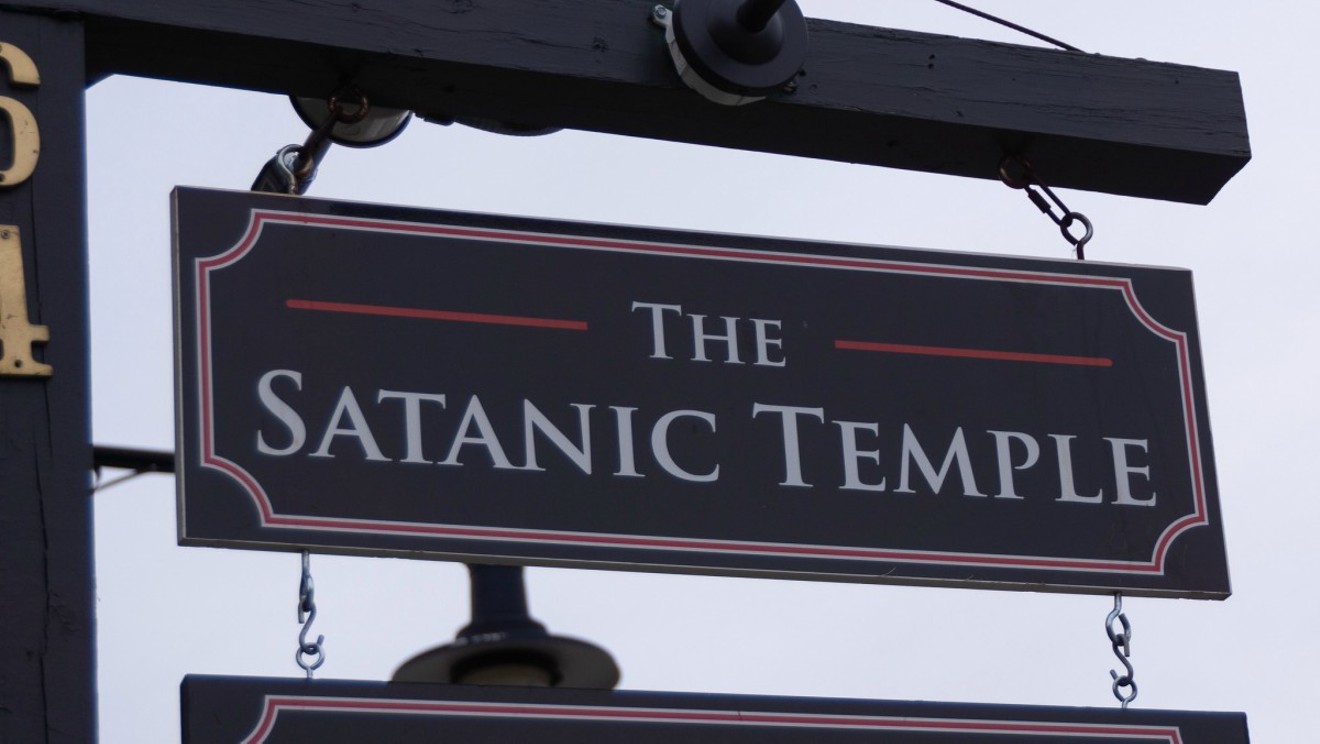 The Satanic Temple of Salem, Massachusetts. Photo by Marc Nozell/Flickr
On a billboard off of I-95, two 1950s-looking gals are depicted drinking Cokes and shooting the breeze about abortion.

"Susan, you're telling me I do not have to endure a waiting period when I have an abortion?" one of the women says.

"That's true if you're a SATANIST!" the other replies.

Next to the ladies is a symbol of a goat head in a pentagram and a message about an abortion ritual.

The Satanic Temple of Salem in Massachusetts bought the billboard space in North Miami Beach, visible from the northbound lane of Interstate 95, to display a quirky new ad about the temple's "religious abortion ritual," which allows members of the religious organization to circumvent state restrictions on abortions. In Florida, anyone seeking to terminate a pregnancy is required to have an ultrasound and go through pre-procedure counseling, but the Satanists believe a religious exemption can be cited to get around that.
click to enlarge 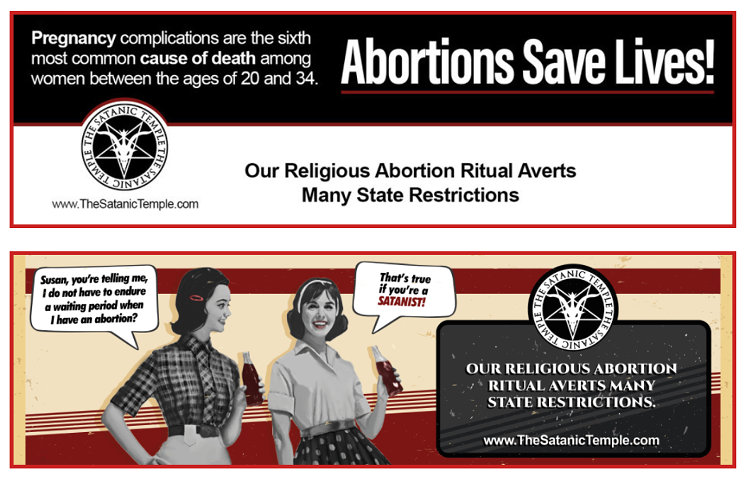 A billboard in North Miami paid for by The Satanic Temple advertises the organization's religious abortion ritual.
Photo courtesy of The Satanic Temple
Sydney Goodwin, a spokesperson for the Satanic Temple, tells New Times the group launched the ad campaign in August. The idea of the "ritual" was crafted by a Satanist who had gone through an abortion and thought it would be a helpful device for others making the decision to terminate a pregnancy.

"The goal is to provide feelings of comfort in a trying time," says Goodwin.

The Satanic Temple believes in seven fundamental tenets that govern how members should act and what they believe. Tenet Three says that a person's body is subject only to their own will, and Tenet Six states that a Satanist's beliefs should conform to their best scientific understanding of the world. The abortion ritual involves reciting those two tenets and a personal affirmation of one's self as a Satanist.

Goodwin says that by performing the ritual, Satanists can proclaim their right to have a medically safe abortion without restriction under the federal Religious Freedoms Restoration Act, which prohibits any government agency from infringing on someone practicing their religion. That means that in states such as Florida, a Satanist can claim religious privilege and be exempt from those requirements, according to the Satanic Temple.

"Many abortion regulations have no scientific purpose or are unnecessary. They only instill guilt and shame in someone having an abortion," Goodwin argues.

Miami is no stranger to religious exemptions for non-mainstream religions. Practitioners of Santeria were famously exempt from laws prohibiting animal sacrifice after citing religious privilege.

If a Satanist performs the ritual and is denied an abortion without the regulatory steps, Goodwin says the Satanic Temple would take the state to court on behalf of that member.

If someone wanted to become a Satanist and perform the ritual, Goodwin says there are no bars to entry or rites of passage. A person doesn't even need to belong to a local chapter of the Satanic Temple.

"As far as sincerity is concerned, asserting that you're a member of the Temple and that the seven tenets is your belief is sufficient enough, and the court should respect that," Goodwin says.

Modern Satanism, popularized by the Church of Satan after its founding in 1966, is not so much a religion based on worship as it is a philosophy based on secularism and a rejection of Christianity, spiritualism, and superstition. The Satanic Temple, founded in 2013, does not actually venerate Satan as a god — its members don't even believe Satan is real. Instead, members of the temple think of Satan as a literary figure who represents rebellion and independence, and they act as social advocates for causes such as reproductive rights.
KEEP MIAMI NEW TIMES FREE... Since we started Miami New Times, it has been defined as the free, independent voice of Miami, and we'd like to keep it that way. With local media under siege, it's more important than ever for us to rally support behind funding our local journalism. You can help by participating in our "I Support" program, allowing us to keep offering readers access to our incisive coverage of local news, food and culture with no paywalls.
Make a one-time donation today for as little as $1.