It's been 11 months since the City of Miami installed "temporary" roadblocks in Silver Bluff. Photo by Joshua Ceballos
Last year, Raymond Iglesias listed his house for sale, but there was a problem. Despite the ongoing sellers' market, four buyers backed out, citing a large roadblock installed by the City of Miami that stands a few feet away from the driveway of the home, located on the southeast corner of SW 17th Avenue and 23rd Street in the Silver Bluff neighborhood.

Though Iglesias hates the roadblock where it currently stands — accompanied around the clock by a police officer parked in a Miami Police Department (MPD) cruiser — he says at one point the situation was even worse.

"I had to call [Miami Commissioner] Joe Carollo to move it back because it blocked my driveway completely," he tells New Times. "No one wanted to buy with that roadblock there."

In October, Raymond Iglesias finally found a buyer willing to put up with the inconvenient eyesore.

But the 11-month battle between the City of Miami and Miami-Dade County over the four potentially illegal roadblocks goes on.

"I hate these roadblocks every day of my life," says Silver Bluff resident Vanessa Hyden, who is now circulating a petition to remove them. "I hate going to my own home."

Last January, the City of Miami approved a plan to install five concrete barricades on a handful of streets around Silver Bluff to prevent drivers stuck in traffic on Coral Way and U.S. 1 from cutting through the neighborhood. Residents at the time had reported bumper-to-bumper traffic, car accidents, speeding, and motorists sideswiping the side mirrors on parked cars.

The only problem is that traffic control is overseen by Miami-Dade County — not the city. But city officials bypassed county protocols and installed the concrete barricades on March 1, 2021, anyway, claiming they were "temporary." The move initiated a feud between the two local governments, which crescendoed into a standoff between MPD and Miami-Dade Police Department (MDPD) officers after crews from the Miami-Dade Department of Transportation and Public Works came to remove the concrete barricades a week later (the one on 23rd Street was removed, but an MPD squad car took its place). Miami-Dade promptly sued the City of Miami in Miami-Dade circuit court and filed an emergency request to remove the remaining four roadblocks. Judge Mark Blumstein denied the motion but ordered the city to replace the remaining four concrete barricades with plastic ones.

Ten months later, the case is still ongoing and the so-called temporary roadblocks remain. Hyden says residents who once dreaded the cut-through traffic say the dead-end streets have turned their neighborhood into a maze. Because Google Maps and other GPS services don't account for the roadblocks, it's become impossible to navigate and residents worry that it might be a safety hazard. One person even shared video with the Miami Herald of an ambulance crew parking outside the barrier and wheeling a resident down the street on a stretcher.

"When we've had emergencies, it's hard for somebody to get in here," Vanessa Hyden tells New Times. "We had a trash fire in my house. Two cops who were nearby came in to get help and they had to call 911, and it took them longer to arrive because of the barricades."
click to enlarge 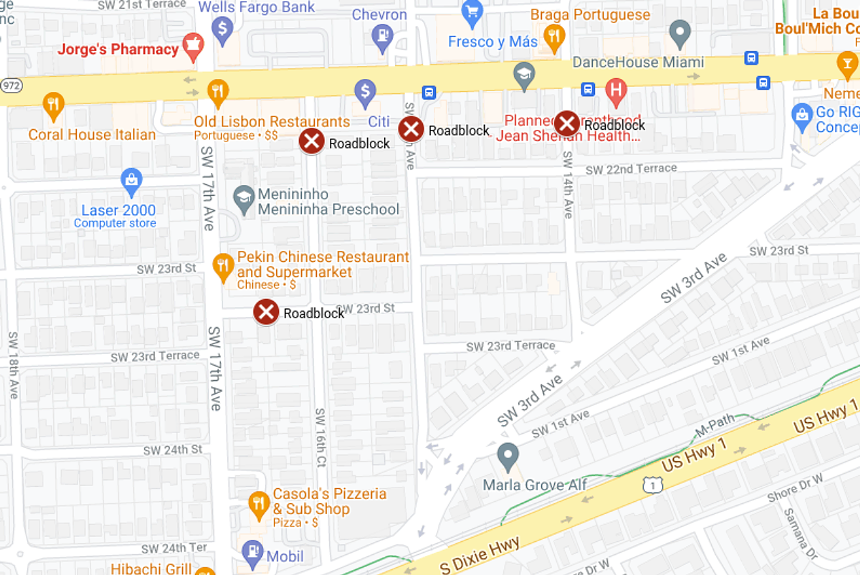 The locations of the remaining four roadblocks
via Google Maps
Maria "Beba" Sardiña Mann, president of the Silver Bluff Homeowners Association, a voluntary HOA, was one of the main proponents of roadblocks. She says they have made the neighborhood safer, and she hopes the streets remain permanently closed.

"Going back to 2001 or 2002 we were screaming about the cars going through our neighborhood avoiding U.S. 1 and Coral Way, blowing through stop signs," Mann tells New Times. "Now I see more people on bicycles. I see families for the first time walking around with babies in strollers."

Mann's neighbor, Rebecca Gordon, confirms that their neighborhood has become more pedestrian-friendly since the roadblocks were installed.

"We're super happy with them," Gordon tells New Times. "Our family has a dog and two kids, and we walk around more now."

One roadblock was placed a few feet from the Casa Catalina apartment complex on SW 16th Court. Astrid Rondon, who lives there, tells New Times the roadblocks have made life harder for her and her family.

"They've trapped us. To get out we have to go up three blocks, and delivery people don't know how to get in here," Rondon says in Spanish. "I get out of work at 1 a.m. and it takes me an extra seven minutes to get in when I just want to go home. Plus the gas is expensive. We're not for this."

Virgen Gonzalez, who lives on SW 23rd Street, says she'd be all right with one roadblock to curb cut-through traffic, but four is overkill.

"Is it necessary to block all these streets? It's a lot of work to get out of here," Gonzalez says. "You could turn left at the gas station, but you might get a ticket. I can't even get to the Fresco y Mas [a block away] easily."

Mann, who lives on SW 23rd Street, says one or two roadblocks won't work. All four have to stay up.

"They have to be in the same places or you shift the traffic somewhere else," she insists.

Meanwhile, the circuit court case is set for jury trial in August.