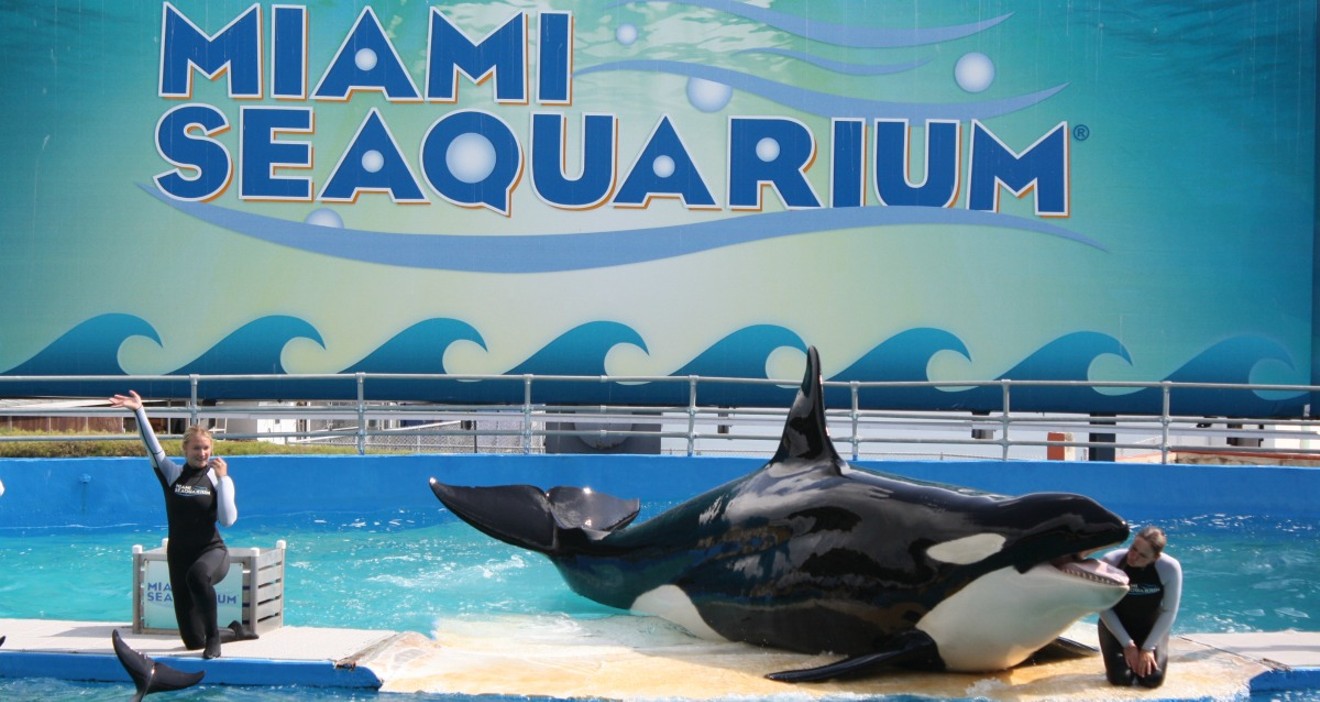 Lolita was brought to Miami Seaquarium in 1970. Photo by Leonardo DaSilva/Flickr
As we remain hunkered down during the COVID-19 pandemic, some of us have gone stir crazy. We've forgotten what day it is. We've tried TikTok. We've given ourselves bangs. We've baked bread. We keep cycling through the motions and walking in circles in our homes.

Our new reality, animal activists say, overlaps how the captive animals at Miami Seaquarium go about their daily lives. However, Americans' short-term quarantine doesn't quite stack up to the confinement the marine park's 22-foot orca, Lolita (AKA Tokitae), has endured since 1970. Her 80-by-35-foot tank is the smallest of its kind for a killer whale in the United States.

"Although humans are feeling the stress of isolation, it's nothing compared to the way the lone orca Lolita must feel after nearly half a century in a cramped tank," a spokesperson for PETA tells New Times. "[She's] quarantined away from her ocean home and isolated from any member of her own species."


#Lolita kept at @MiamiSeaquarium hell hole. We only have to be in quarantine a few months & we still have some freedom to entertain ourselves & exercise etc.

For an Orca, this is like being in a bathtub for 50 years - psychological & physical torture It’s Infuriating! #Covid19 pic.twitter.com/3aTYP5m2OQ

After recent reports of zoos around the world considering feeding animals to one another during the pandemic, local animal activists have expressed concern about how the animals at the Seaquarium are faring. A big concern is whether the abrupt closure of the attraction will result in a diminished budget to feed and care for the animals.

Miami Seaquarium did not respond to multiple emails from New Times. But its website states the marine park's resident animals, and those undergoing rehabilitation, are being taken care of. The Animal Welfare Act requires zookeepers to be on hand, even during the pandemic, to ensure minimum standards of care are met.

"As with all of the residents at Miami Seaquarium... rescued animals are receiving the same excellent treatment and care from our dedicated team of animal care professionals," the Seaquarium's COVID-19 FAQ states.

Still, some activists say "excellent treatment" is relative. In the wild, they say, southern resident orcas like Lolita regularly swim 75 miles or more each day. For years, the activists have urged the marine park to retire the famous whale from her "less-than-ideal" living conditions to an oceanside sanctuary to give her more space to move.

"The Miami Seaquarium should release all the animals into seaside sanctuaries, giving them a taste of freedom and protecting the welfare of human workers who are currently trying to care for them in tiny crowded tanks," PETA tells New Times.

In the meantime, as millions of Americans continue to stay at home to flatten the curve, the activist movement to retire the orca, amid growing sympathies, just might experience a refreshed fervor.
KEEP MIAMI NEW TIMES FREE... Since we started Miami New Times, it has been defined as the free, independent voice of Miami, and we'd like to keep it that way. With local media under siege, it's more important than ever for us to rally support behind funding our local journalism. You can help by participating in our "I Support" program, allowing us to keep offering readers access to our incisive coverage of local news, food and culture with no paywalls.
Make a one-time donation today for as little as $1.