Pedestrian-Friendly "Woonerf" Streets in Wynwood One Step Closer to Approval 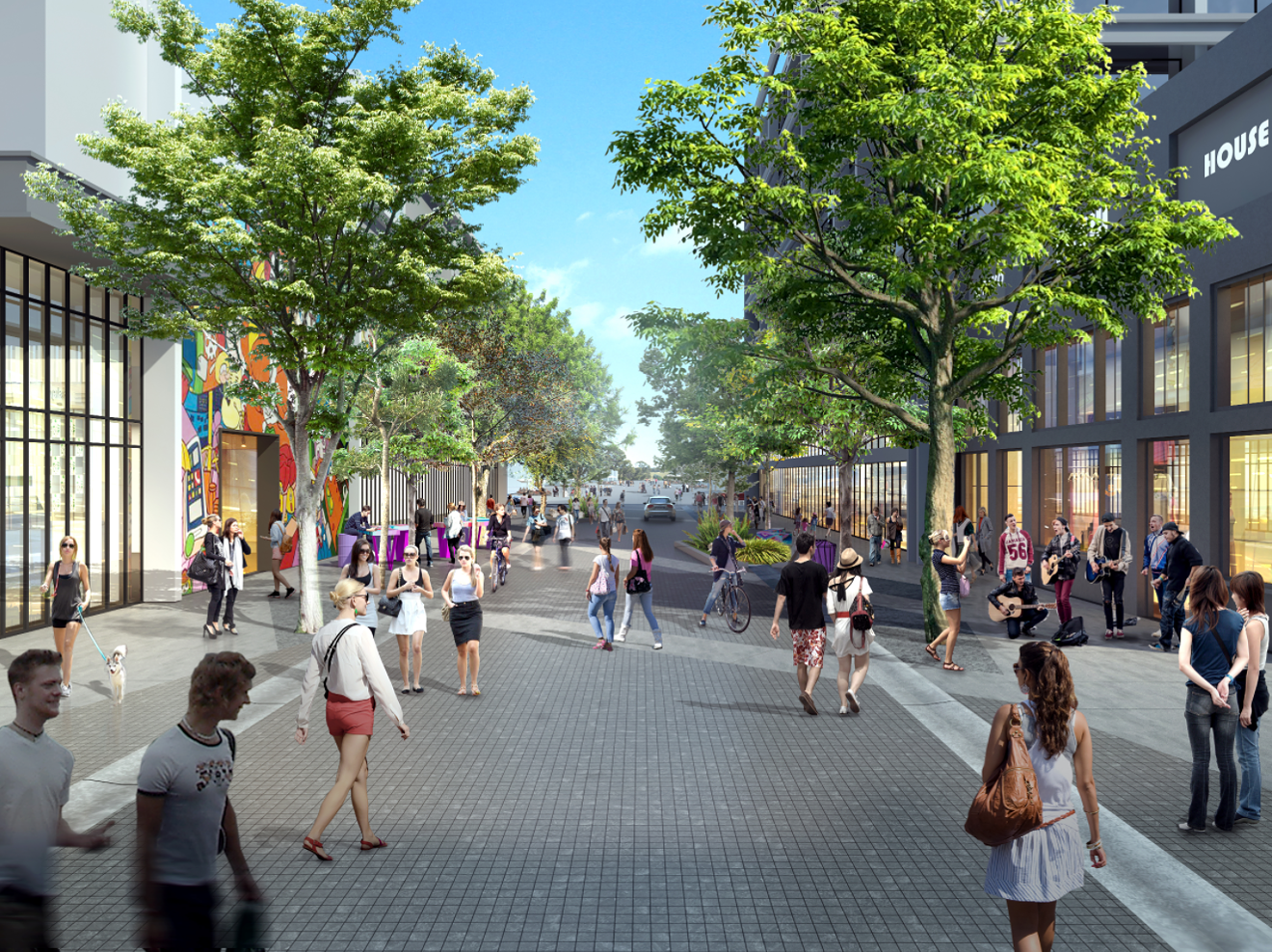 Rendering of a woonerf planned for Northwest First Avenue in Wynwood Courtesy of Wynwood BID and ArchitectonicaGEO
As a neighborhood, Wynwood seems to have it all. The former industrial district has transformed into a globally recognized destination for its murals, cafés, bars, nightlife, and entertainment. Add in the office space, retail shops, and residential buildings that have moved into the area over the past several years, and nearly all the pieces of Wynwood's work-play-sleep puzzle have come together.

Still, elements like open spaces and greenery are sorely lacking. While Wynwood's edgy feel has become characteristic of the area, some business owners and residents are looking to Wynwood's future as a more walkable and livable neighborhood.

Enter the woonerf, which, surprisingly, is not the sound you make when firing foam darts from an oversize toy gun. Woonerfs, Dutch-inspired "living streets" designed with pedestrians and cyclists in mind, have long been proposed for Wynwood and are now one step closer to being approved. Cars are allowed on woonerfs (pronounced voo-nerfs), but strategically placed landscaping and bollards force drivers to slow down, pay closer attention to the road, and coexist with others using the street as a shared, social space. (We know. It's Miami. Have a little faith.)

The living streets are part of a larger proposal, called the Wynwood Streetscape Master Plan, that offers a new look for the art and entertainment hub and gives streets and sidewalks a makeover. Late last month, the City of Miami's Planning, Zoning & Appeals Board voted 10-1 to recommend that the city commission approve the streetscape plan. Commissioners are expected to consider the plan at their October 22 meeting.

"The biggest takeaway of this whole plan is to prioritize pedestrians over vehicles," says Albert Garcia, chairman and cofounder of the Wynwood Business Improvement District, a city board that represents property owners. "This ranks pedestrians as number one."

The plan also incorporates protected bike lanes, new crosswalks, street-end parks along Wynwood's eastern boundary, and a 1.8-mile "wellness loop" for walkers, runners, and cyclists. The idea is to reimagine Wynwood's existing infrastructure and make more out of its outdoor spaces.

"Land in the neighborhood is quite expensive," Garcia says. "Most of it is being redeveloped. There's no county- or city-owned land in Wynwood, so there are no public parks. The plan basically calls for converting some of those roadways into linear parks. That's one aspect we're very excited about."

Widened sidewalks and added crosswalks are a critical component of the plan, Garcia notes. Wynwood's sidewalks are heavily trafficked, and people regularly spill out from the walkways onto the street. Garcia says seven streets are proposed to be redesigned with expanded sidewalks.

Wynwood's streetscape, designed by Miami-based ArquitectonicaGEO, would get an infusion of green via the planting of shade trees and "urban wild" landscaping. Garcia says the point isn't to turn Wynwood into a lush garden or change the character of the neighborhood, but rather to introduce some tree canopy and offset the heat island effect in the neighborhood.

"Wynwood is largely just concrete," Garcia says. "It's part of the attraction and part of its detriment because of the heat and humidity."

Add some street furniture beneath the shade trees, and visitors have places to sit and hang out. Wynwood Walls, although privately owned, is the only space that's free and open to the public. The streetscape plan proposes more such spaces.

"Part of the issue is equitable access to open public spaces," Garcia says. "Right now, if you want to enjoy hanging out in the shade somewhere, you need to pay for a coffee or meal or pay to go into a lounge. This will be the first time where there'll be areas open, free to the public, and available 24/7."
KEEP MIAMI NEW TIMES FREE... Since we started Miami New Times, it has been defined as the free, independent voice of Miami, and we'd like to keep it that way. With local media under siege, it's more important than ever for us to rally support behind funding our local journalism. You can help by participating in our "I Support" program, allowing us to keep offering readers access to our incisive coverage of local news, food and culture with no paywalls.
Make a one-time donation today for as little as $1.