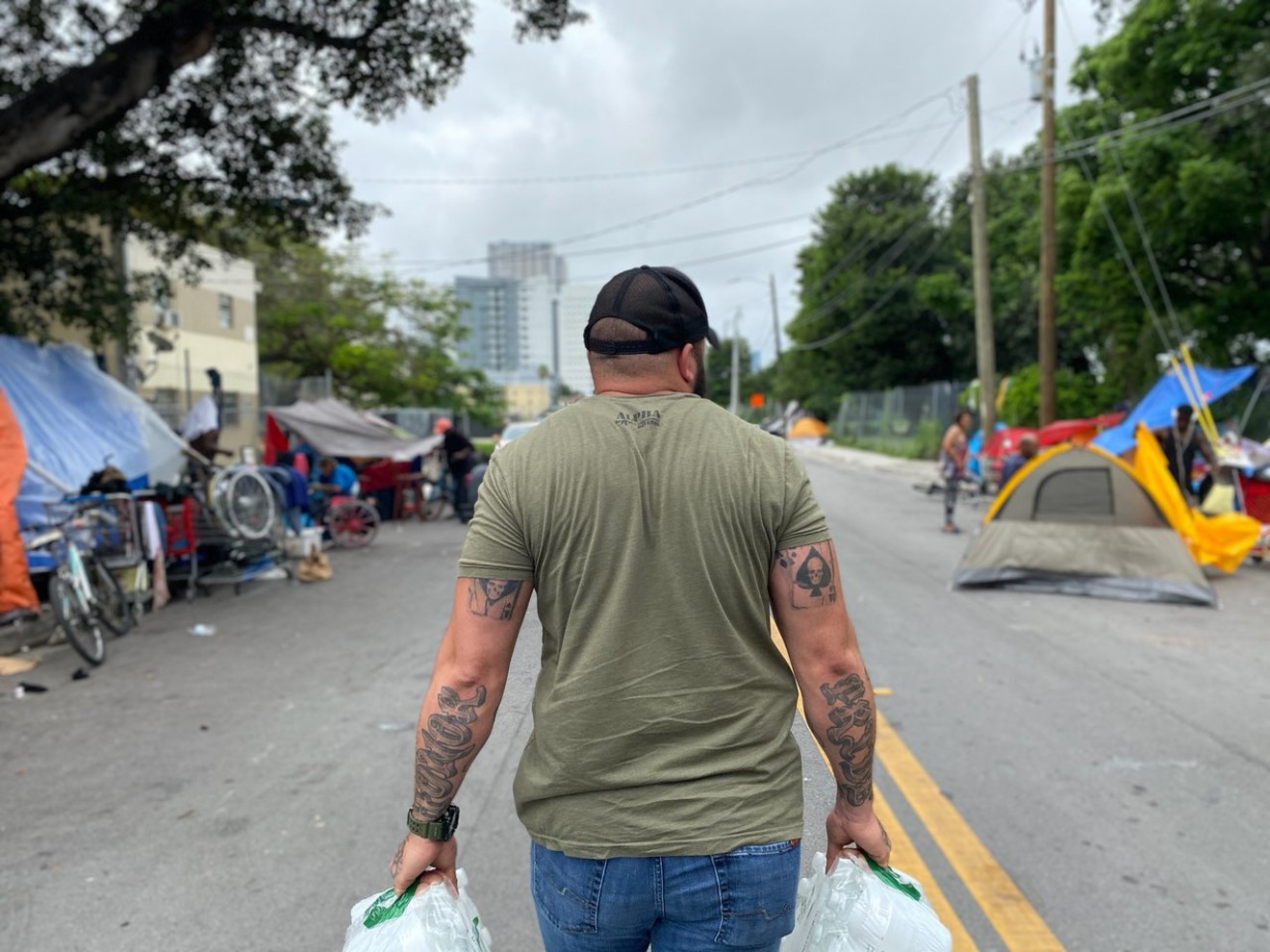 Suleiman Yousef hands out food to the homeless. Photo courtesy of Suleiman Yousef
A pair of Ford trucks with tinted windows stops next to a row of camping tents underneath Interstate 95 in Overtown. During a scorching afternoon last month, the highway provides some soothing shade to a small homeless community living in an encampment on NW 11th Street and NW Third Avenue. Five dudes emerge from the pickups and walk to the beds of their jacked-up rides.

One of them, a scruffy-bearded 38-year-old with a beefy build wearing jeans, flip-flops, and a Grateful Dead T-shirt, walks to the middle of the street.

"Anybody want food and water?" Suleiman Yousef yells. "We got some for you over here."

A half-dozen men and women slowly emerge from their tents and approach Yousef's four pals, who hand out cold bottled water and Styrofoam containers of spaghetti and meatballs. About five minutes later, the trucks head to another street underneath the highway to feed more members of Miami's most vulnerable population.

As Yousef and his crew are about to start passing out meals, they are approached by Milton Vickers, the City of Miami's human services director, who had seen them setting up while driving by in a white Mercedes Benz, according to a cellphone video taken by one of the volunteers.

The video shows Vickers telling them that their humanitarian endeavor will soon require a city permit if their feedings attract a gathering of 25 people or more, a number that would include those providing food to the homeless. In addition to making good Samaritans register with Miami government officials, organizations will only be allowed to feed the homeless once a week at one of five sites designated by the city under a new ordinance that takes effect near the end of this month. Violators will have to pay a $250 fine for the first offense and $500 for the second offense.

"The permit lets us know where your feedings are going to be," Vickers explains to Yousef in the video. "We can also make sure the trash receptacles are there and make sure you clean up after yourself. At the same time, we will provide housing assistance if they want it."

Near the end of the video clip, Yousef scolds Vickers for seemingly showing more concern about discarded food containers than people starving in the streets.

"I challenge you or anyone from the city to come live here for 30 days and only have one feeding a week," Yousef seethes.

The ordinance, championed by City Commissioner Manolo Reyes, is the latest assault against downtown Miami's homeless population by local government officials amid the COVID-19 pandemic. In May, city workers cleared out an encampment under the same I-95 overpass in a move social-justice advocates decried as "cruel" and "heartless." Around 17 people whose personal belongings were tossed were also unable to secure temporary housing at a local hotel that has a deal with the Miami-Dade Homeless Trust to provide rooms.

Now, Miami officials are attacking the homeless by targeting those who want to help them, Yousef tells New Times.

"These politicians are putting pressure on [Vickers] to go after people who do this on their own," Yousef says. "I don't get how someone who collects a government check funded by the [taxpayers] can sit there and allow people to starve. They should sit down, shut the fuck up, and not fuck with individuals who are willing to do their job for them."

"It's bullshit," Garcia says. "They are putting a bunch of regulations so you basically don't go out and help people. I don't know what their agenda is."

In an email to New Times, Vickers says he was simply informing Yousef and his associates about the mechanics of the new regulations on feeding the homeless.

"It will be the responsibility of each individual or organization granted a permit to make sure that the location of the feeding is left in clean conditions," Vickers wrote. "It will also allow staff to provide assistance to the homeless... We hope that this ordinance will help in keeping city streets clear of trash and debris that has traditionally been left after these feedings have occurred."

Steven Ferreiro Jr., Reyes' chief of staff, insists the city is not looking to discourage folks like Yousef from conducting feedings.

"It's not about the mom and dads that go out with their kids on a weekend or the lady who wants to do something as a good Samaritan," Ferreiro says. "What this gentleman is doing is not prohibited unless he stops and has 20 people lining up, plus his four friends."

Still, the city needs to get a handle on mass homeless feedings in Miami, Ferreiro says.

"It's the large groups that set up large tables with trays that we are concerned about," he says. "We do have concerns about safety."

At least one charitable organization has thrown its support behind Reyes' measure. Narciso Muñoz, co-founder of the nonprofit Hermanos de la Calle Foundation, says coordinating with the city means the homeless people his group helps can better access social-service programs. Hermanos de la Calle feeds homeless people in downtown Miami on Friday evenings and Saturday afternoons, handing out about 300 to 400 containers of food at each outing, Muñoz says. His volunteers also give out clothes and personal hygiene products.

"Obviously, it's harder to get people who have a mental illness or have severe addictions off the streets," Muñoz says. "But if you only feed them, then you are making the homeless problem a chronic one. Offering them food is a way in to help people get off the streets. That is our mission."

Nevertheless, the American Civil Liberties Union (ACLU) argues the city's new feeding requirements would punish individuals like Yousef who offer food. In a letter submitted before the City Commission's June 25 vote, attorneys for the ACLU wrote the ordinance "would effectively serve as an unlawful ban on all public food service to the homeless throughout the city."

The ordinance could also face constitutional challenges similar to the lawsuit filed against the City of Fort Lauderdale in 2014 to overturn a prohibition against feeding the homeless in a city park. In 2018, a federal appeals court ruled food sharing is protected by the First Amendment, overturning a lower court's decision in Fort Lauderdale's favor.

During Yousef's most recent feeding trip, some of downtown Miami's homeless residents were not aware the city was going to clamp down on feedings. Lucky, an elderly man with long blond hair and piercing blue eyes, groused about the new law while sitting on a milk crate on the corner of NW 11th Street and Fifth Avenue.

"It's not right," Lucky said. "Without them, we don't have any food. The shelters can't feed everybody."

Nearby, a man in shorts and holding an umbrella agreed that the new ordinance isn't fair.

"People do this out of the kindness of their hearts," he said. "I don't think they should regulate that. You have different sets of people giving out plates of food. You really can't put a number on it."
KEEP MIAMI NEW TIMES FREE... Since we started Miami New Times, it has been defined as the free, independent voice of Miami, and we'd like to keep it that way. With local media under siege, it's more important than ever for us to rally support behind funding our local journalism. You can help by participating in our "I Support" program, allowing us to keep offering readers access to our incisive coverage of local news, food and culture with no paywalls.
Make a one-time donation today for as little as $1.