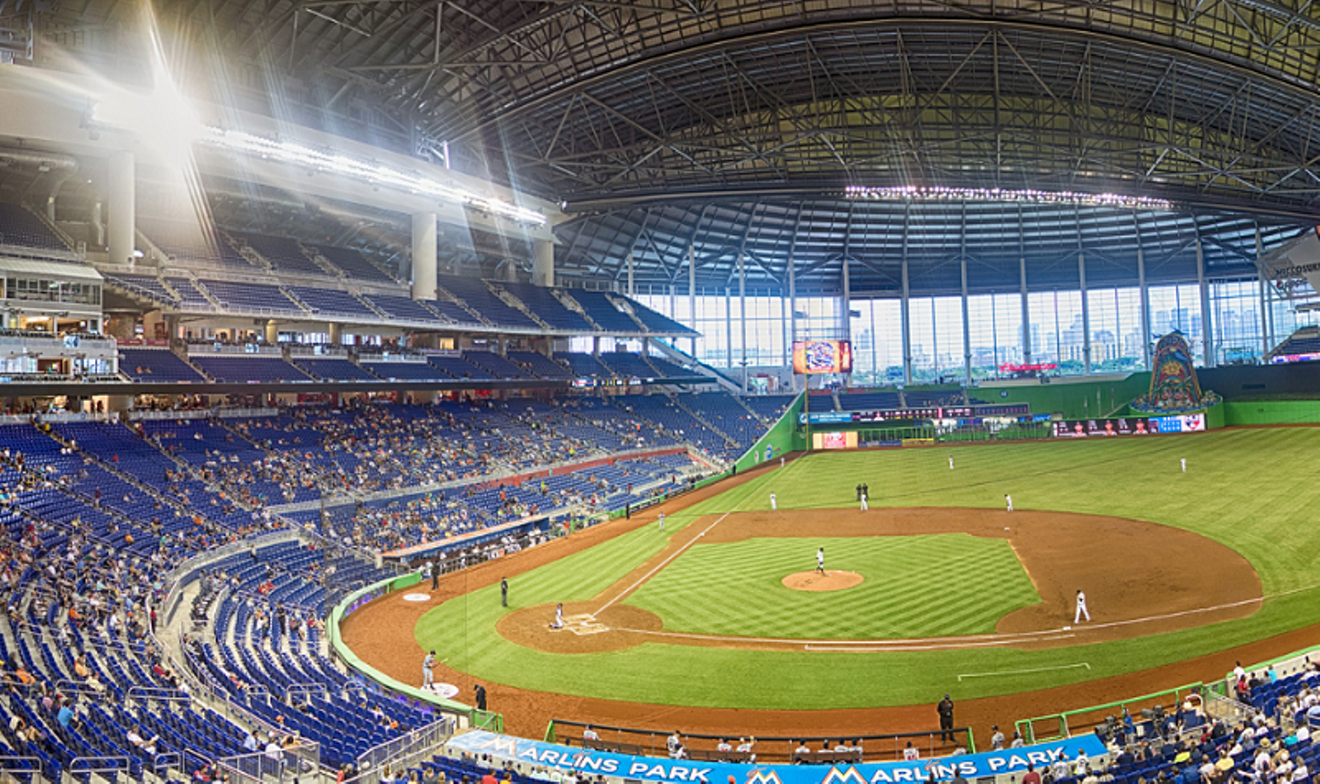 Most Americans outside the Midwest have probably never seen an Indianapolis Indians game. The Indians are the Pittsburgh Pirates' Minor League Baseball affiliate — they play in the AAA International League in a stadium that holds a maximum of about 14,000 people. The single most exciting thing about attending an Indians game is maybe seeing a teenaged future star smash a home run off a 38-year-old pitcher who flamed out of the majors with a 7.60 ERA. The best-case scenario for every talented Indians player is to leave the team.

So why are the Indians relevant to Miami sports fans? Their average game attendance was nearly equal to that of the Miami Marlins, an allegedly top-level baseball team with a 35,000-seat ballpark built with more than $1 billion in taxpayer money.

According to an Associated Press report yesterday, the Marlins drew a total of only 811,104 fans to Marlins Park over 81 home games this year — the lowest single-season turnout for any team since the 2004 Montreal Expos. And, yes, that was the year the Expos announced they were leaving town to become the Washington Nationals.

But New Times has further crunched those numbers, and it turns out the Fins' basically put up minor-league attendance numbers this year. In 2017, the Indians drew 9,159 fans per game. That's just 854 fans per game away from the Marlins' abysmal 2018 average of 10,013.

Minor-league teams typically don't play in stadiums with more than 10,000 seats, but other teams in the AAA-rated International League have regularly come close to topping that number. In 2017, the Charlotte Knights, at 9,109 fans per game, also came within 1,000 fans of the 2018 attendance numbers for the Fish. A few other teams in the International League  — the Round Rock Express, Lehigh Valley IronPigs, Columbus Clippers, and Nashville Sounds — also routinely hover around 9,000 per game.

It's worth noting minor-league attendance dipped across the board in 2018. This year, the Charlotte Knights topped the league with 8,980 fans per game. Major League Baseball attendance and viewership also declined overall this year.

But it's still fair to say the Miami Marlins, run by baseball legend Derek Jeter, were roughly as exciting as a top-flight minor-league team in 2018. In Marlins Park this year, fans could hear every single ringing cell phone and crying baby. Fish faithful could read the entire script to Waiting for Godot aloud in the upper deck and the players in the outfield could pick up every syllable.

Then Papa John got caught using the N-word, and all of the stadium's pizza kiosks closed:


No more sign of Papa John’s at Marlins Park. pic.twitter.com/iqDsLy0B3Z

In comparison, the Los Angeles Dodgers led the league in attendance this year. More than 3.8 million fans, just more than 47,000 fans per game, bought tickets at Dodger Stadium. Even the Baltimore Orioles, who came in dead last in 2018 and won only 45 games, averaged more than 19,000 fans per game and sold 1.8 million total tickets.

Technically speaking, there's even one AAA minor league where attendance has eclipsed that 10,000-fans-per-game milestone: The Liga Mexicana de Béisbol, which is classified as an official minor league but functions as the top-level league in Mexico. In 2017, two teams — the Monterrey Sultanes and Tijuana Toros — averaged more than 10,000 fans per game: The Sultanes attracted a whopping 11,575 fans per contest over 57 home games. In 2016, fan attendance hit 12,783 tickets per game. Though MLB in June banned pro U.S. teams from drafting LMB players due to alleged league-wide corruption, fan attendance in a few Mexican cities has been so steady that baseball analysts have long wondered whether Monterrey should get its own MLB team. The Marlins sound like good candidates for a Mexican sojourn.

It's easy to joke that the Marlins would have had to try to fail to draw such a paltry number of fans this year, but that's basically what the team did. Jeter and financial backer Bruce Sherman came into the 2018 season with plenty of goodwill after buying the team from Jeffrey Loria, an all-consuming celestial demon who crash-landed in the Everglades in 2002 and succeeded to suck all color, sound, and happiness from the Magic City. Things were looking up.

But then Jeter and Sherman sold off the team's best players, including Christian Yelich, Marcell Ozuna, and reigning home-run king Giancarlo Stanton. To be fair, though, it's probably not accurate to claim fewer fans came out for the new era than under the hated Loria — Jeter's group is just being more honest about attendance numbers after years of Loria's group cooking the books on ticket sales.

Still, it hasn't been a stellar year of great PR for Jeter — especially after the team absurdly claimed in court that the Marlins are based in the British Virgin Islands in order to avoid liability in a legal case. If only that were true, more fans might show up to Tortola Marlins games. The Virgin Islands can keep them.

In the meantime, Miami taxpayers have a $1.2 billion ballpark loan to pay off.
KEEP MIAMI NEW TIMES FREE... Since we started Miami New Times, it has been defined as the free, independent voice of Miami, and we'd like to keep it that way. With local media under siege, it's more important than ever for us to rally support behind funding our local journalism. You can help by participating in our "I Support" program, allowing us to keep offering readers access to our incisive coverage of local news, food and culture with no paywalls.
Make a one-time donation today for as little as $1.