Through a series of surveys and town hall meetings, pictured here, the housing advocacy groups asked Allapattah residents and business owners what they'd like to see included in the development of the GSA Lot. Photo by Isabella Bru via Urban Impact Lab
An 18-acre lot in the heart of Allapattah is a dream come true for the community: a wide swath of government-owned land with high-density zoning close to public transit and nearby jobs.

It's a perfect spot for deeply affordable housing in the face of oncoming gentrification, local advocates say, but radio silence from their city commissioner has them worried this will be just another missed opportunity.

"We're very concerned that there's an opportunity on a lot that size for hundreds if not thousands of housing units, but it feels like the city’s about to blow it," says Annie Lord, executive director of Miami Homes for All, a housing advocacy group based in Miami.

The property is the City of Miami's General Services Administration Center on NW 20th Street between NW 12th and NW 14th avenues just north of the Jackson Memorial Hospital complex. Miami Mayor Francis Suarez proposed in 2019 to redevelop the land, which currently houses the city's Solid Waste Department, asset management, and at least one SWAT van, into something new.
click to enlarge 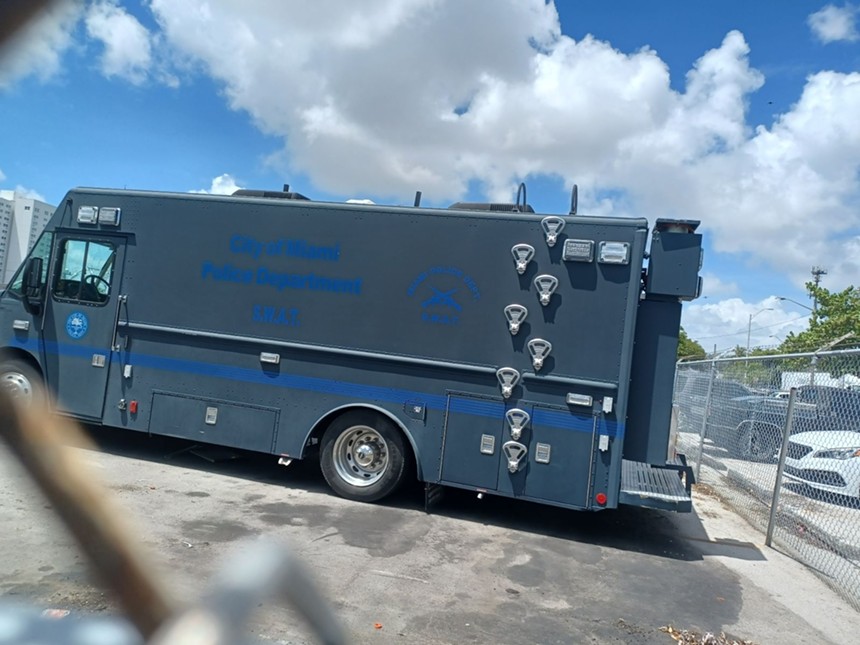 A Miami Police Department SWAT van at the General Services Administration lot in Allapattah
Photo by Joshua Ceballos
The city commissioned a community insights report from local groups to determine what people living in Allapattah wanted to see developed on the lot. Through a series of interviews, town halls, and surveys, residents responded that they wanted recreational green space, very affordable housing, and a community center to bring new life to the area.

But after developer NR Investments put in an unsolicited proposal this July for a 99-year lease on the property, advocates got concerned.

By contrast, community groups want units with rent calculated at 60 percent of the median income.

The unsolicited proposal triggered the creation of a Request for Proposals (RFP), which will invite other developers to bid their own ideas based on a set of criteria outlined by the city's administration. That RFP is due for release on September 12, but Allapattah advocates say they've received no commitment from city staff that the RFP will include the community's own recommendations for what they want to see.

"We want the city to adopt the insights report and make the recommendations of the neighborhood a heavy part of the criteria," says Mileyka Burgos, CEO of Allapattah Collaborative Community Development Corporation. "But there hasn't been a lot of communication to us from our commissioner."

Miami City Commissioner Alex Díaz de la Portilla, who represents Allapattah, has not responded to the advocates' requests to meet about the GSA lot, Lord and Burgos tell New Times. Lord says she had scheduled a meeting with the commissioner's office but was left waiting for over an hour and a half before being asked to leave.

Reached by New Times via text on Wednesday, Díaz de la Portilla said he does not talk to people who do not live in the city or in his district and claimed that the staff of Allapattah Collaborative and Miami Homes For All don't live in the city.

"People have to live in the community they want to represent," Díaz de la Portilla asserted.

Lord tells New Times she does live in the City of Miami.

Lord says the groups have had numerous meetings with the city administration in advance of the RFP, but the city has not committed to using the community's recommendations as RFP criteria. She worries that the lack of commitment and Diaz de la Portilla's silence on the matter could mean the community engagement over the past three years has been for naught.

"It's an astounding reality that there’s been so little discourse about this even though it will affect the city for decades to come," she says.

According to the city's lobbyist database, one of the lobbyists for NR Investments on their proposal is Humberto Hernandez. A former Miami commissioner who was removed from office twice amid allegations of bank fraud and election fraud, Hernandez recently returned to public life as a lobbyist to the city with reported connections to Díaz de la Portilla. Hernandez was sitting with Díaz de la Portilla and another lobbyist, Carlos Lago, at Morton's Steakhouse in Coral Gables in February 2022 when the Allapattah commissioner was famously slapped by CJ Gimenez.

The advocate groups had planned to bring up the RFP during public comment at the City Commission's scheduled meeting on September 8, but that meeting was canceled early this week. A special meeting has been called for September 13, the day after the RFP goes public.

Allapattah Collaborative and community coalition Public Land for Public Good will hold a virtual town hall today at 6 p.m. via Zoom, which attendees can access via this link.

"It's important for people to know that this isn't just about Allapattah. This is about our ongoing affordability crisis, and this development will affect Overtown, Liberty City, and the surrounding parts of the city," says Burgos.
KEEP MIAMI NEW TIMES FREE... Since we started Miami New Times, it has been defined as the free, independent voice of Miami, and we'd like to keep it that way. With local media under siege, it's more important than ever for us to rally support behind funding our local journalism. You can help by participating in our "I Support" program, allowing us to keep offering readers access to our incisive coverage of local news, food and culture with no paywalls.
Make a one-time donation today for as little as $1.