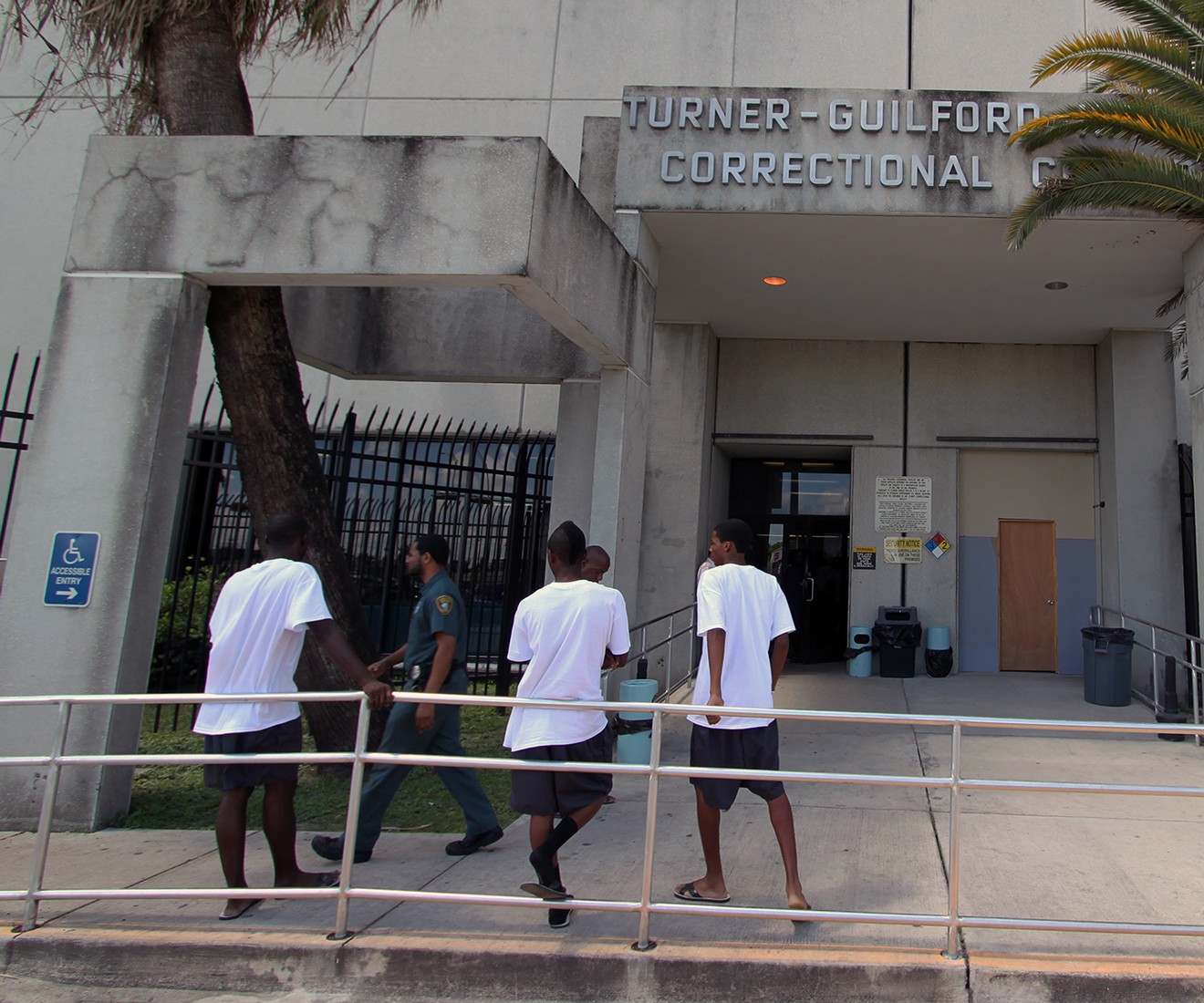 Miami-Dade Corrections wants to build a new jail near Turner Guilford Knight Correctional Center. Photo by Theo Karantsalis
Amid a sharp drop in its jail population, Miami-Dade County will soon embark on its most ambitious and costliest jail expansion in history.

The project will involve the construction of two new facilities, at an estimated cost of more than $447 million. During the first phase, the county will build a $123 million intake and release facility near the existing Turner Guilford Knight Correctional Center (TGK) that will also serve as administrative headquarters for Miami-Dade Corrections and Rehabilitation. In the second phase, a new $318 million, 1,956-bed jail will be built beside the Metro West detention facility.

The remaining cost of the project comes from a $5 million sally port that will be constructed at the new intake and release facility.

Cost estimates for the new jail expansion plan.
Screenshot via Miami-Dade Corrections and Rehabilitation
The county needs a new jail because of the current system's obsolete design, which would require $30 million in renovations, according to Daniel Junior, director of Miami-Dade Corrections and Rehabilitation. The upgraded design will include classrooms, provide work skills, and offer more mental-health services.

In recent weeks, Junior has been appearing at meetings in the cities surrounding the two jail sites to discuss the county's plan.

At a recent meeting of the Miami Springs City Council, he said the first site near TGK has already gone out for bid.

Next month, the county will publish design criteria for super-sizing Metro West facilities — the second jail site — with final proposals due in October. Once approved by a selection committee, which may take about a year, all jail plans must then be okayed by the county commission. Construction at TGK and Metro West is expected to take about three and a half years.

The new jail will address the "aging infrastructure of oldest facilities," Junior said.

Metro West sits on a 11.5-acre lot at Northwest 41st Street and 136th Place. Last fall, Junior told commissioners that the county sought to buy and develop eight to 15 acres of available land next to Metro West to build a replacement facility.

The land west of the jail is a 508-acre parcel owned by the state. Miami-Dade County Commissioner Jose "Pepe" Diaz, whose district includes both TGK and Metro West, tells New Times the county is waiting to acquire the land from the state before putting the job out for bid.

Miami-Dade County jails have an average daily population of about 4,000 to 4,300 per day, and upward of 170 inmates are released daily from TGK.

The new intake and release facility will be built next to TGK at the site of the current Training and Treatment Center, located at 6950 NW 36th St. That means that each person arrested in Miami-Dade will be booked and eventually released at the new facility just northwest of Miami International Airport.

"We are still disappointed that the entire intake and release is at TGK," Deno tells New Times. "The county should also release inmates at Metro West and save money on transportation."

In addition to the new intake and release facility, the new TGK-adjacent site will include courtrooms, a state attorney's office, police and fire stations, and a parking garage. The plans indicate that Miami-Dade Corrections' current administrative headquarters at 2525 NW 62nd St. in Liberty City will close and relocate to the new site.

Records show the county based its forecast for the initial costs of the expansion using a 2019 construction index, but the price of building materials has risen sharply since.

"As for construction costs increases, the administration is working with Junior to determine those costs moving forward and to get a better handle on it," Commissioner Diaz tells New Times. "We are phasing down other institutions, which were costly and overrun in costs to make something efficient, new, and very friendly and protective of our people that work there and also viewing the humanity of the people who are inhabitants there."

Advocates of criminal-justice reform have opposed the new jail facilities since the county's plans were made public last year. Several critics spoke out against the proposal at a county commission meeting in March 2020, and a coalition of academics at the University of Miami and Florida International University last summer wrote a letter opposing the expansion.

Using historical data to predict future trends and build bigger jails is a poor approach because it doesn't take into account potential reforms like decriminalization, says Mikelina Belaineh, director of impact at the Last Prisoner Project, who works to reduce jail populations across the U.S.

"What we know about local jails is that most people in there don't need to be in there," Belaineh said. "When you invest in jail beds, you will get more incarceration. A bigger jail immediately gets filled up."

"We have been pressing throughout this process for there to be no expansion in beds and strongly urging a reduction in beds, and we are still hoping that will be the outcome," Baker says.