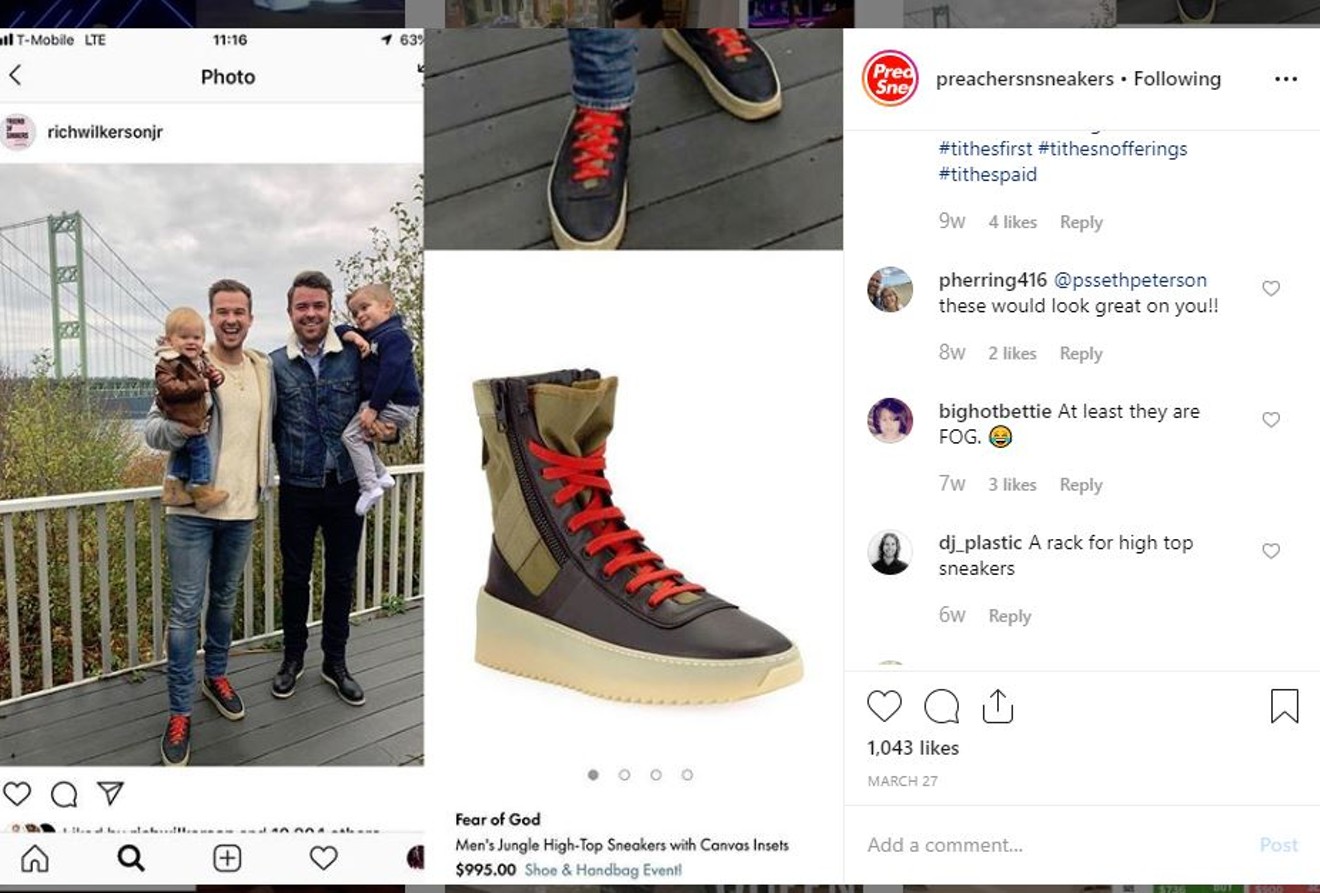 Preachers N Sneakers via Instagram
Rich Wilkerson Jr.'s footwear was modest — at least by megachurch preacher standards. In a photo snapped earlier this month at the Vous Conference, an annual gathering held by his church in Miami, the celebrity pastor wore a pair of Air Force 1s valued at about $80. Beside him, another preacher donned a $2,400 pair of Nikes.

It was the most reasonably priced footwear Wilkerson has been shown wearing on PreachersNSneakers, an Instagram account that's built a major following by cataloging the sometimes exorbitantly expensive sneakers of megachurch pastors. The account, which has previously featured Wilkerson in shoes that cost almost a thousand dollars, sprang up in March and quickly caused a stir in the evangelical world and beyond. It's been written about in religious and sneakerhead publications alike, and inspired debate over the appropriateness of preachers, who likely collect tithes from their congregations, wearing thousand-dollar shoes.

There was(were?) a slous of fresh kicks at Vous Conference 2019

A post shared by PreachersNSneakers (@preachersnsneakers) on Jun 17, 2019 at 2:37pm PDT

PreachersNSneakers was started by a 20-something Christian and sneaker fan who goes by the pseudonym of Tyler Jones. He began the account after watching a YouTube video of a Christian performer and noticing he was wearing sneakers with a resale value around $700. When he scrolled through the Instagram feeds of prominent megachurch pastors, Jones saw it wasn't a fluke. But he's not ready to say it isn't right for church leaders to wear pricey shoes.

"There are so many factors that go into answering this question, and I’ve quickly become aware that each person’s situation is different," Jones tells New Times in an email. "That sounds like a cop-out, but it truly seems impossible to definitively say if it’s appropriate or not. I do think it’s worth considering the optics/message that your clothes communicate (whether the perception is fair or not) and that applies to all of us, not just preachers."

Wilkerson, who leads Miami's Vous Church and is best known for officiating Kim Kardashian and Kanye West's wedding, was featured in PreachersNSneakers' first post. In it, Wilkerson stands against a row of pay phones in a pair of Yeezys with a resale value of $357. A few days later, he's back, this time in some $854 Fear of Gods. In his third appearance on the account, he wears $995 Fear of God sneakers.

Like most of the pastors who have popped up on the account, Wilkerson hasn't addressed it publicly. (One of the few to do so was John Gray, a senior pastor at Greenville, South Carolina-based Relentless Church, who told the New York Times his shoes help him connect with millennials. "I don’t think you can judge a man's heart based on their attire," he said. "What a person wears doesn't determine what their value system is.")

Wilkerson, who did not respond to New Times' request for comment, was born into a long line of preachers and started Vous as an offshoot of his family's Miami Gardens church, Trinity. After Kimye's wedding, Wilkerson and his wife had an Oxygen reality show, Rich in Faith, which aired its only season in 2016.

Vous is aimed at young people and has a following that includes Justin Bieber, who recently shared a video of Wilkerson preaching during the Vous Conference. In it, Wilkerson wore a shirt and shorts from Bieber's clothing line, Drew House. It was, coincidentally, taken during the same panel that PreachersNSneakers posted — the one where Wilkerson wore the $80 Air Force 1s.

Though Wilkerson hasn't talked about his PreachersNSneakers appearances, Christian rapper Andy Mineo has. In an interview with Relevant Magazine, he said Wilkerson was a friend of his and a "genuinely incredible guy" who is given designer stuff because of his work.

"I know Rich is getting free stuff," Mineo said. "He lives on a humble salary. People love him and thank him for the work he does, and they give him sneakers and clothes. He’s not out there buying that stuff. Ninety percent of that stuff is given to him."
KEEP MIAMI NEW TIMES FREE... Since we started Miami New Times, it has been defined as the free, independent voice of Miami, and we'd like to keep it that way. With local media under siege, it's more important than ever for us to rally support behind funding our local journalism. You can help by participating in our "I Support" program, allowing us to keep offering readers access to our incisive coverage of local news, food and culture with no paywalls.
Make a one-time donation today for as little as $1.