Luca Lavieri and his girlfriend own two wolfdogs. Courtesy of Luca Lavieri
Douglas Kincaid was walking his border collie, Sasha, through his Normandy Isles neighborhood Sunday night when something that looked like a wolf came sprinting across the street. In a flash, the animal locked its jaws around Sasha. Kincaid could only scream and tug at Sasha's leash while fighting the huge white animal for his dog's life.

"I had this sense of unreality," Kincaid says, "like I was out in the wilderness or something and a wild animal was attacking."

A passing driver, Mark Ferguson, saw the commotion and jumped out of his car to help break up what he thought was a dog fight. Only when he got close did he see that one of the animals was no ordinary dog.

"I'm like, A wolf? What the fuck? This is Miami Beach," Ferguson says.

It wasn't a wolf — not exactly. It was a wolfdog: part wolf, part dog, and owned by a local man who considers himself an ambassador for the animal. It had attacked a dog once before, and would again that night, shortly before Ferguson and Kincaid finally freed Sasha and police arrived to investigate. Then the wolfdog would wander the neighborhood for hours, and Animal Services would refuse to respond until the animal had been captured.

The bizarre incident has reignited a debate over whether Miami Beach should continue allowing residents to own wolfdogs. Under Florida law, any hybrid that's up to 75 percent wolf is considered a dog and thus legal to own. Miami-Dade County follows the state law despite enforcing a ban on pit bulls. Normandy Isles residents have organized a meeting tonight to discuss the "wolf issue" with police. As happened after the previous attack, they're pushing for a ban. Sasha in happier times.
Courtesy of Douglas Kincaid
Animal Services, meanwhile, has opened an investigation into whether the wolfdog should be classified as a dangerous dog. But Luca Lavieri, who with his girlfriend owns the animal, Eva, says he has already relocated her, along with the couple's other wolfdog, Lupin.

"They're not going to stay in the area anymore," Lavieri says. "It's not for the safety of the human beings, because we know that nobody has ever been attacked. The problem is she's been a little bit aggressive toward other dogs."

The first time Eva was "a little bit aggressive" was in March 2018, while Donna Stoner was walking her beagle, Brady, and Lavieri was walking Eva. The wolfdog broke free from her leash, snatched Brady, and tossed him from side to side. A neighbor ran from his house and hit Eva with a broom until she let go of the beagle. Brady needed more than 60 stitches to repair his wounds.

Neighbors were rattled by the attack. The Stoner family wanted the wolfdogs out of the neighborhood but dropped the matter after Lavieri paid the bills for Brady's care. Lavieri, who maintains an Instagram account for his wolfdogs, insisted at the time that his pets were no more dangerous than other dogs and that his neighbors were being discriminatory.
click to enlarge Lavieri said his wolfdogs are no more dangerous than other dogs.
Courtesy of Luca Lavieri
Things settled down — until Sunday night. Lavieri and his girlfriend were out of town. Eva somehow escaped her enclosure in the couple's backyard, a man who was watching the wolfdogs told police. The wolfdog charged at Kincaid and Sasha around 10:30 on the 1500 block of 71st Street. Ferguson arrived minutes later.

A distraught Kincaid had left for the vet and Ferguson was speaking to police when a woman began screaming nearby. Officers hurried to the 1700 block of Biarritz Drive, where they found Amy Seagle and her pug, Gus, who was bleeding after becoming the wolfdog's second victim. The two had been out for a walk when Eva suddenly grabbed Gus.

Seagle had thrown rocks, her phone, and her shoes at the wolfdog, all to no avail. Finally, she threw a chair, and that's when Eva dashed away.

"There was blood on my hands, on my car," she says. "I was terrified. Of course, my first thought was he wouldn't make it."

Kincaid and Seagle ended up at the same 24-hour veterinarian's office, Knowles Animal Clinic, where they exchanged stories. Sasha needed surgery to repair her punctured intestines, and Gus got stitches. Both are still at the vet and expected to recover.
click to enlarge 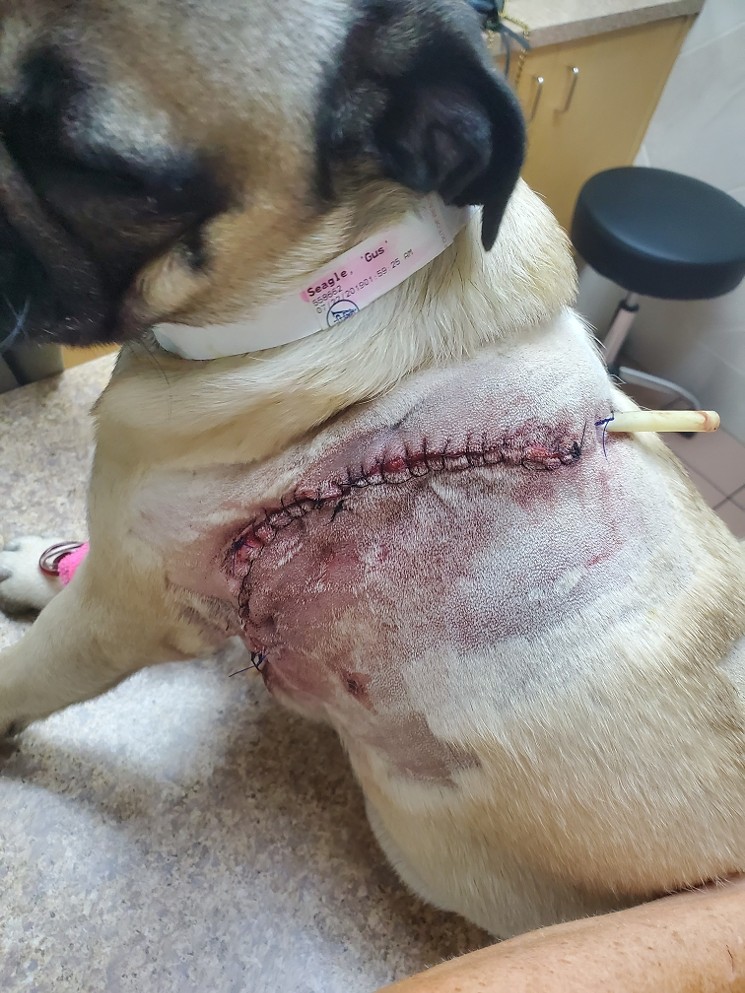 Gus needed stitches after the attack.
Courtesy of Amy Seagle
Eva, meanwhile, returned to her cage on her own around 5 a.m. Monday. Lavieri says he was up all night worrying and was relieved that both of the attacked dogs survived. He says he's moving his wolfdogs to a sanctuary "for the peace of mind of all the people around."

"I don't think that an animal with any percent of wild in it should be in a populated area with other dogs," Seagle says, "especially if it keeps getting out."
KEEP MIAMI NEW TIMES FREE... Since we started Miami New Times, it has been defined as the free, independent voice of Miami, and we'd like to keep it that way. With local media under siege, it's more important than ever for us to rally support behind funding our local journalism. You can help by participating in our "I Support" program, allowing us to keep offering readers access to our incisive coverage of local news, food and culture with no paywalls.
Make a one-time donation today for as little as $1.