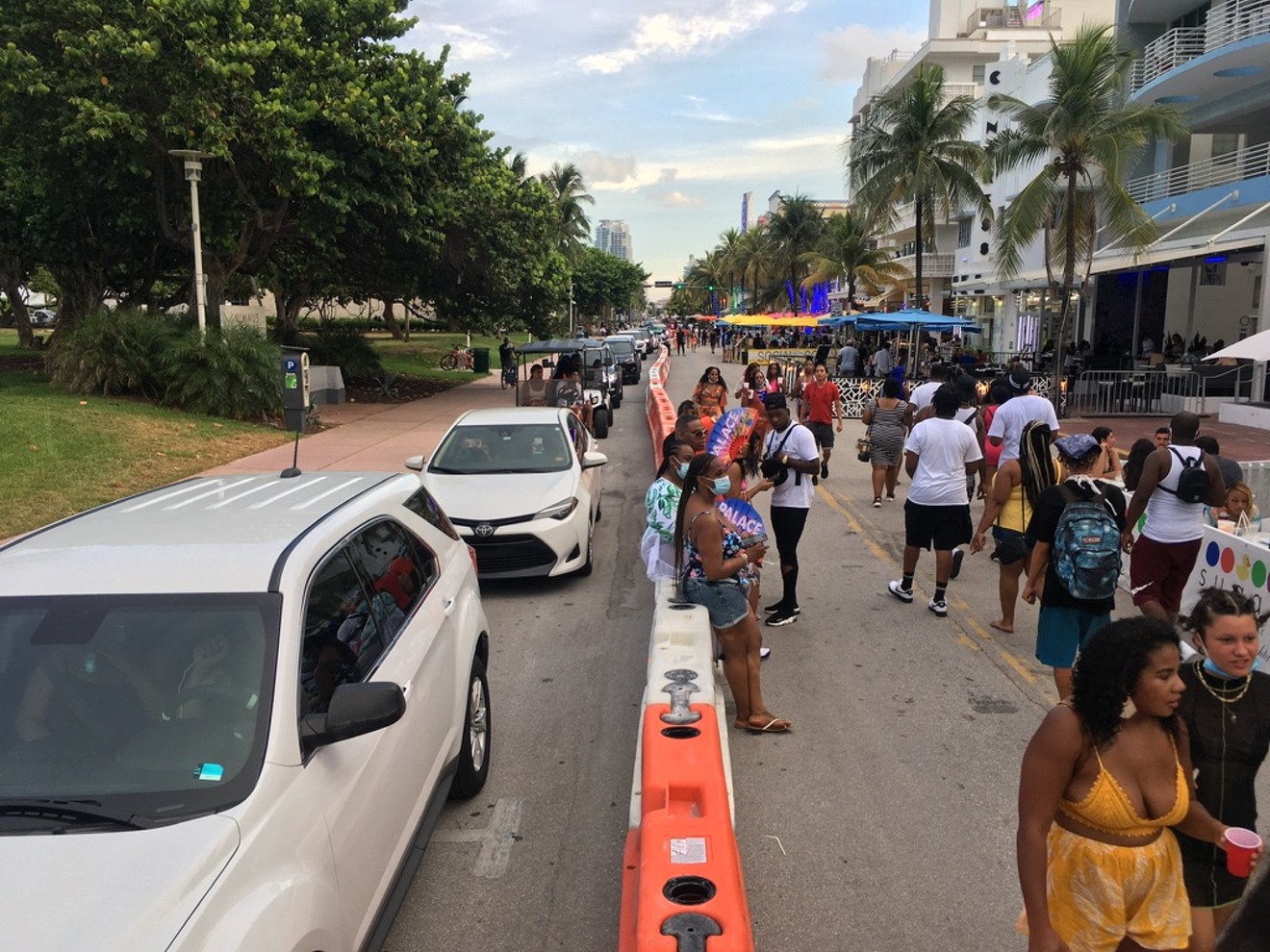 The City of Miami Beach reopened one lane of Ocean Drive to cars over the Fourth of July weekend. Photo courtesy of Transit Alliance Miami
An experiment in urban planning hit South Beach in May when Miami Beach closed off a ten-block section of its famed Ocean Drive to cars, turning the street into a pedestrian zone. Over the Fourth of July weekend, however, the city allowed cars to return to a narrow northbound lane, angering some residents and commissioners.

On May 21, Miami-Dade County approved Miami Beach's plan to close several streets to vehicles to allow restaurants to expand outdoor seating. Ocean Drive was blocked by barricades from Fifth Street to 15th Street, allowing pedestrians, cyclists, and skaters to use the open street and practice social distancing.

"It felt like it was more family-friendly. People were out enjoying the fresh air, rollerblading and biking," says Carolina Bolado, a Miami Beach resident and volunteer for the advocacy group Transit Alliance Miami. "It was helpful during the early pandemic when everything was shut down, because we needed space to run around."

Bolado lives in Mid Beach with her two children and had never spent a lot of time on Ocean Drive. When the street was opened to pedestrians in May, however, she says she went about a dozen times to bike with her kids and sit in Lummus Park.

When the city reopened the northbound lane to cars this past weekend, Bolado and a number of other residents were upset at losing what they saw as a big step in pedestrian integration.

"It's an outdated mindset to push to bring cars back," Bolado says.

On June 11, the Ocean Drive Association (ODA), which represents a group of local business owners, passed a resolution recommending that the city reopen the northbound traffic lane for good and allow for valet parking on side streets. City Manager Jimmy Morales met with the ODA last week to discuss the move.

In emails obtained by New Times, Morales told city commissioners on July 2 that after meeting with the ODA, they reached a consensus to bring traffic back to one lane.

Some commissioners say they were notified but not properly consulted.

"Instead of allowing the pilot closure of Ocean Drive to play out for us to study, the City administration abruptly pushed an ill-conceived plan that was a failure from day one. The administration did so unilaterally without consulting elected officials," Commissioner Ricky Arriola comments to New Times via email.

Commissioner Mark Samuelian says he opposed reopening the street to cars and plans to bring the issue before the commission.

"A decision of this magnitude should be vetted by the full commission, and every commissioner should be briefed," Samuelian says. "In terms of the outcome, I don't like it. I don't see any reason why we should have cars."

Some local businesses say they felt invigorated by the pedestrian era of Ocean Drive and are disappointed with the return of cars, saying the increased foot traffic brought more business at a time when COVID-19 has battered the hospitality industry and the county has ordered restaurants to close all indoor seating.

Snodgrass added that reopening Ocean Drive to cars has had the opposite effect. "We're down to $2,000 since Friday. This hit us real hard."

Not every local business owner was happy with the pedestrian zone, however. David Wallack, the owner of Mango's Tropical Cafe and an ODA board member, emailed local leaders on July 3 saying Ocean Drive needs to have car traffic to survive and bring in more tourism dollars. He also said the pedestrians who've been walking around are not buying from local businesses and are causing trouble.

"...Without VALET IN FRONT OF WHEREVER THEY WANT TO GO, again the 'good customers' will not come," Wallack wrote. "Ocean Drive has ALWAYS BEEN, and ALWAYS WILL BE a TOURIST DESTINATION. It is NOT EVER, and will NEVER BE a RESIDENT DRIVEN DESTINATION."

Wallack tells New Times that Mango's has been closed for renovation throughout the pandemic but he has been acting as an "educated observer," watching the pedestrian traffic and local businesses. He says he has seen empty seats. He says he has also seen an uptick in fights, crime, and bad behavior since Ocean Drive was opened to pedestrians, although he says that's been an ongoing problem for the past two years.

Most recently, there was a shooting at the Voodoo Lounge on Ocean Drive — between Ninth and Tenth streets just north of Mango's — on the night of June 30, an incident that led Miami Beach City Manager Jimmy Morales to impose a curfew. Even so, Miami Beach Police Department spokesman Ernesto Rodriguez tells New Times via email there have been "significantly fewer calls" to police from the area this year compared to the same time last year.

Some residents fear the ODA is throwing its weight around, and that the street is better off in the hands of locals. One such resident is Jo Manning, who has lived on Ocean Drive for 25 years and served on numerous city panels and boards.

"The ODA has been dominated by rich people who are unimaginative," Manning says. "People have been enjoying the street. Families and kids are walking with smiles on their faces, and that's something I haven't seen in a long time."

Wallack and Manning do agree on one thing: The current one-lane configuration doesn't work. Both say there's bumper-to-bumper northbound traffic, and none of the drivers are able to park or drop in on a local business.

Azhar Chougle, the executive director of Transit Alliance Miami, says Ocean Drive needs to move beyond the days when people would drive up to show off their cars and cruise the street.

"Ocean Drive should've been closed to traffic a long time ago. It makes for a street that's friendlier, more accessible for businesses," Chougle asserts. "Is the best we can strive for a hallmark street where people show off cars, or a street where families feel safe to have a night out?"
KEEP MIAMI NEW TIMES FREE... Since we started Miami New Times, it has been defined as the free, independent voice of Miami, and we'd like to keep it that way. With local media under siege, it's more important than ever for us to rally support behind funding our local journalism. You can help by participating in our "I Support" program, allowing us to keep offering readers access to our incisive coverage of local news, food and culture with no paywalls.
Make a one-time donation today for as little as $1.