Lane Change: Ron DeSantis' "Anti-Riot" Law Appears Not to Apply to Protest That Blocked the Palmetto 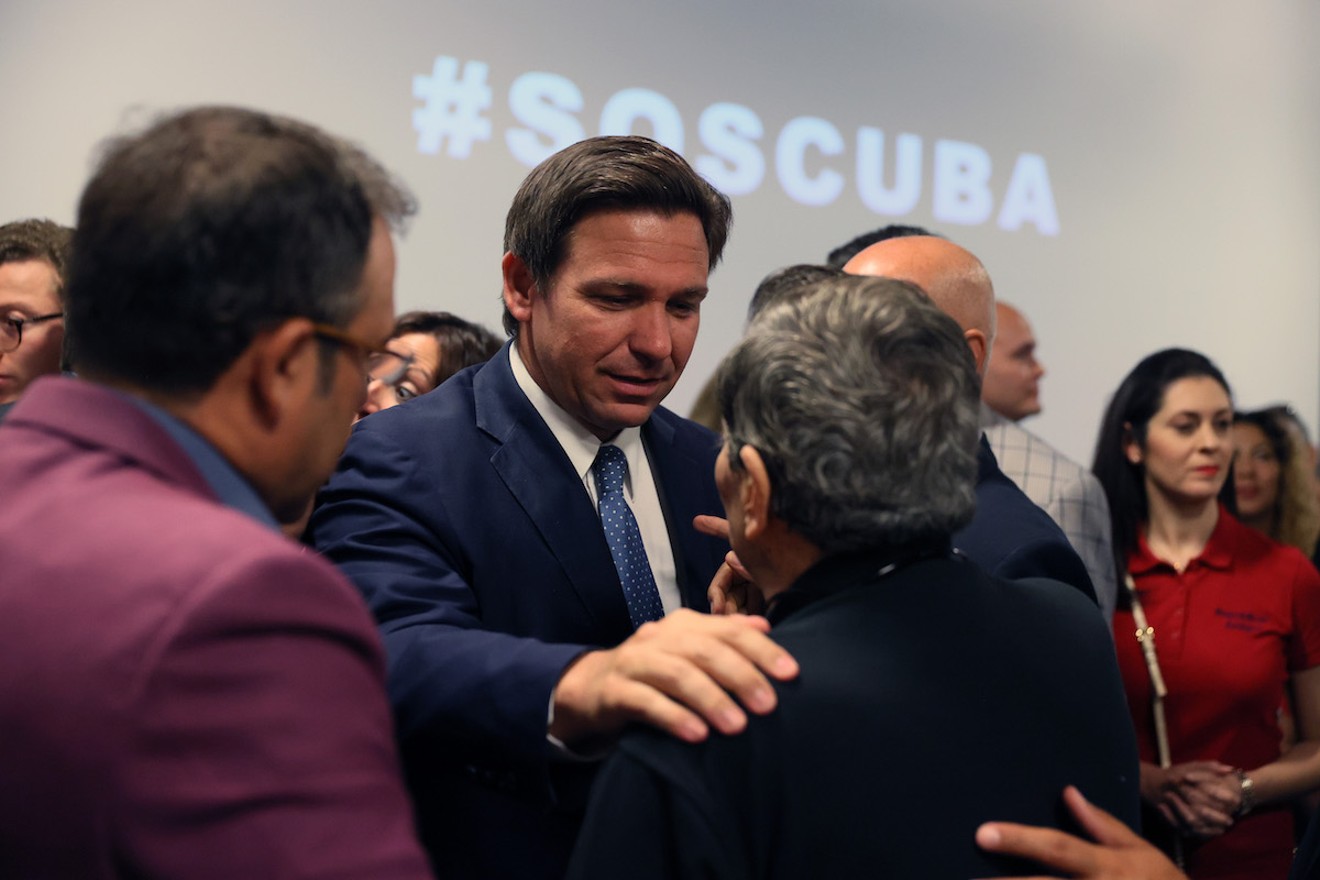 Florida Gov. Ron DeSantis greets people after holding a roundtable discussion about the uprising in Cuba at the American Museum of the Cuba Diaspora on July 13, 2021, in Miami. Photo by Joe Raedle/Getty Images
In Florida, political gain appears to trump consistency.

The largest protests in decades erupted in Cuba on Sunday, with Cubans banding together to speak out against a crumbling economy, food and medicine shortages, and the Cuban government's handling of the COVID-19 pandemic. Florida Gov. Ron DeSantis, along with Miami Republicans like U.S. Rep. Maria Elvira Salazar and Miami Mayor Francis Suarez, immediately took to social media to show solidarity with the resistance on the island.

Thousands of Cubans in Miami also responded to the protests over the weekend, massing in Little Havana and Hialeah and shutting down public thoroughfares. On Tuesday, Miami demonstrations continued, with protesters shutting down the Palmetto Expressway in both directions between the SW 24th Street and SW 40th Street exits.


#BREAKING - The Palmetto Expressway (SR-826) has been shut down in both directions near Coral Way and SW 32nd Street as protestors voicing their support for the people of Cuba went onto the expressway. pic.twitter.com/8cCFNmL5m7

The traffic disruptions were not surprising. Nor was DeSantis' solidarity with the Cuban-American protesters, a reliably conservative voting bloc that helped propel him to elected office, first as a U.S. Congressman and later the governor's mansion.

But there was an unmistakable element of cognitive dissonance to the scene.

In April of this year, DeSantis signed into law a bill he called "the strongest anti-rioting, pro-law enforcement piece of legislation in the country." The law, which the governor had pitched to the state's Republican-controlled legislature in 2020, was expressly designed to dissuade protesters from vandalizing businesses, toppling monuments, or blocking highway traffic. It was a direct response to the widespread Black Lives Matter protests against police brutality, systemic racism, and racial injustice that erupted across the nation following the killing of George Floyd in Minneapolis.

DeSantis said the law was about protecting Floridians. He said he supported "lawful," "peaceful" protests, and that the law would shield businesses and people from the effects of rioting.

Surely, then, the new law would be invoked to quell a demonstration that put people's lives at risk by blocking traffic on a major highway, because that's one of the activities that now constitutes a criminal act.

At a roundtable discussion in Miami with Florida Republicans including Lt. Gov. Jeanette ​​Núñez and former U.S. Ambassador Carlos Trujillo on Tuesday, DeSantis declined to answer reporters who inquired why he chose to speak in support of local protests that were blocking off parts of Palmetto. Instead, he talked about protesters in Cuba, noting that the protests on the island were "not necessarily designed to be peaceful."


DeSantis asked about protesters in Miami blocking off streets. He shifts to talk about protesters in Cuba, who are “not necessarily designed to be peaceful” because they’re revolting. “People understand the difference betwern peacefully assembling… and tackling down people.”

When DeSantis introduced HB1, commonly referred to as the "anti-riot" law, he wanted it to act as an expansion of the state's Stand Your Ground law by giving motorists the right to run over protesters if drivers felt threatened by them. The bill as first introduced also would have made it a crime to organize a protest that turned disorderly.

As passed, the law prohibits obstructing traffic by standing on a street or highway. It also creates a charge for "aggravated rioting" if the offense involves 25 or more people.

In contrast to DeSantis' demurral when he was asked about the large group that stopped traffic on the Palmetto today, his critics are speaking out.


Reminder that Ron Desantis signed a law that explicitly prohibits this and gives drivers the ability to run protestors over while escaping civil liability. I don’t want this enforced on ANYONE but Desantis selectively chooses who to enforce it on based on political convenience. https://t.co/COpsKblWVm

Wonder what the difference is between this & the protests last summer that led to a massive overreaction by @GovRonDeSantis & @FloridaGOP who made it their #1 priority to prohibit... exactly this???

And to be clear: I love and support a good demonstration for human rights! https://t.co/vD9ATh6PIG

Steve Simeonidis, chair of the Miami-Dade Democrats, took to Twitter after the roundtable, calling on the governor to repeal the anti-protest law.

Jorge Duany, director of the FIU Cuban Research Institute, tells New Times that the Cuban protests both locally and abroad are likely backed by both major U.S. political parties, who see the importance of securing the Cuban-American vote in future elections.

But the governor's support for the protests is odd, Duany says, because the law is so clearly not being equally applied to all peaceful protests.

"It does seem ironic and paradoxical that the governor as well as his supporters are trying to control and restrict public peaceful manifestations, as in the case of Black Lives Matter, which I think is the inspiration for this kind of backlash," Duany elaborates. "Now some of those same elected officials are fully supporting the right of the Cuban people to rise up against the state. You can't really have it both ways."
KEEP MIAMI NEW TIMES FREE... Since we started Miami New Times, it has been defined as the free, independent voice of Miami, and we'd like to keep it that way. With local media under siege, it's more important than ever for us to rally support behind funding our local journalism. You can help by participating in our "I Support" program, allowing us to keep offering readers access to our incisive coverage of local news, food and culture with no paywalls.
Make a one-time donation today for as little as $1.