A cloud of tear gas at a protest in downtown Miami on June 27, 2020. Photo by Jonathan DeCamps
As demonstrations against police brutality and the killing of George Floyd continue in Miami, police deployed tear gas to disperse a group of protesters on Interstate 395 on Saturday night.

Three people who were present tell New Times they witnessed at least three protesters get hit by rubber bullets and around 30 being tear-gassed, with six severely affected by the chemical. Miami activist Jonathan Gartrelle says he has two large round welts on his leg and arm, which he thinks were caused by rubber bullets that bounced off the ground before striking him. Miami police previously used tear gas and rubber bullets at a protest in late May.

A Miami Police Department spokesperson could not immediately confirm that rubber bullets were used Saturday.

The widespread use of chemical agents on protesters in more than 100 US cities during the global coronavirus pandemic has drawn criticism from experts who say the substances could worsen the effects of COVID-19. Although chemical irritants are considered non-lethal, they can cause permanent disabilities if used incorrectly.

Rubber bullets are far more damaging. A 2017 British Medical Journal analysis of projectiles used in crowd control found that 15 percent of people injured were permanently disabled and 3 percent died. Earlier this month, a Fort Lauderdale woman suffered a fractured skull after being hit by a rubber bullet at a protest.

Gartrelle says he knows of at least six people who were severely affected by the tear gas Saturday night and that he personally carried three protesters who were trapped in smoke and could not walk. Additionally, he says a 14-year-old was present when the tear gas was deployed.

"What gets me is that we are in a pandemic of a respiratory virus," Gartrelle says. "This is an 'I can't breathe' epidemic, and they suffocated us."

For the past month, demonstrators have marched through the streets of Miami almost daily. Saturday's protest began peacefully at the Torch of Friendship on Biscayne Boulevard around 5 p.m. The group marched for hours, at one point stopping to do yoga while blocking traffic on the Brickell Avenue Bridge.

Protesters do yoga during a June 27, 2020, demonstration.
Photo by Jonathan DeCamps
Around 8:30 p.m., the group attempted to enter Interstate 395 and was blocked by bicycle patrols, but some protesters managed to get onto the highway through a neighboring construction site. Gartrelle says protesters occupied the highway for around 15 minutes before police began advancing.

"A group of us tried to quell the situation, but some people were too furious to turn back," says Gartrelle, who is part of a group that has been de-escalating tense encounters between protesters and police.

Officer Kiara Delva, a spokesperson for the Miami Police Department, tells New Times a group of protesters "armed themselves with debris."

"Objects such as rocks & bottles were thrown at police officers, at which point in time dispersal orders were given and refused," she writes in an email. "As a result, officers were forced to deploy an irritant."

She could not confirm the use of rubber bullets at the time of her statement.

Gartrelle says that after police gave an order for the crowd to disperse, around 70 protesters began exiting the highway while nearly 30 remained. Of those 30, some continued chanting at police while others tried to pull them back.

"At that point, there was a breakdown in communication as to whether we stay or go," Gartrelle says. "During that time, tear gas was released and rubber bullets were fired."

He says chaos ensued when tear-gas canisters landed between the two groups, blocking them off in a cloud of smoke.

"People were choking. They couldn't walk or breathe. I carried choking people out of there, and then I would run back to get more," Gartrelle says. "What I believe to be a rubber bullet came up and shot me on my knee and another one on my elbow."

He says he didn't see anyone throwing objects at police before gas was deployed, but some people did throw tear gas canisters back at police.

Another protester who has been involved in organizing marches did not wish to be identified but explained that tear-gas canisters rolled down the highway on-ramp, causing people who were leaving the scene to be affected.

"People were throwing up multiple times. They couldn't see or open their eyes," the protester tells New Times. "They were screaming and yelling for medics."

The protester says police fired the tear gas at several intervals, creating a dense concentration of the chemical. The person witnessed someone throwing a bottle at police, but only after the tear gas was used.

The activists who have been organizing the demonstrations have had a team of medics at each protest. Gartrelle says at least three medics were present Saturday with first-aid equipment to counter the effects of the tear gas. To his knowledge, no one was hospitalized or arrested after the event.
KEEP MIAMI NEW TIMES FREE... Since we started Miami New Times, it has been defined as the free, independent voice of Miami, and we'd like to keep it that way. With local media under siege, it's more important than ever for us to rally support behind funding our local journalism. You can help by participating in our "I Support" program, allowing us to keep offering readers access to our incisive coverage of local news, food and culture with no paywalls.
Make a one-time donation today for as little as $1. 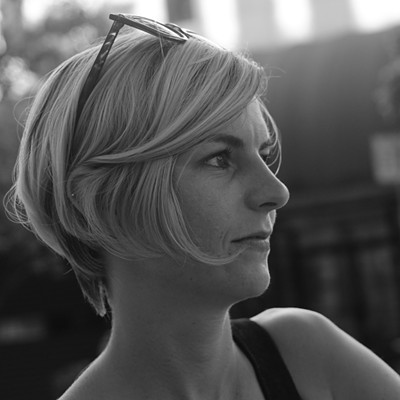