But in numerous interviews with outlets including CNN, MSNBC, and ABC News, where Karp has appeared as a local expert to discuss possible causes for the building's fatal disintegration, the well-known architect has not disclosed his connection to an adjacent condo that has come under scrutiny in the aftermath of the collapse.

Records obtained by New Times show that Karp was involved in the development of Eighty Seven Park, a luxury condo tower located immediately south of Champlain that some Surfside residents suspect may have caused some harm to the collapsed building. While Karp had no legal obligation to disclose his connection to the Eighty Seven Park project in media interviews, his history with the development might influence the way he speaks about the disaster, and his failure to provide that key piece of information could result in an incomplete picture for viewers who watch or read his commentary.

In two lawsuits filed against the Champlain Towers South Condo Association, surviving residents of the tower have brought up the construction of Eighty Seven Park and noted it as a possible contributor to structural damage at Champlain Towers South. Completed in 2019 and designed by renowned Italian architect Renzo Piano, the 18-story condo is located at 8701 Collins Ave., within Miami Beach city limits.

Surfside town commissioner Charles Kesl has also spoken publicly about the development of Eighty Seven Park, telling Local 10 that residents at Champlain had concerns about the construction of an underground parking garage at 8701 Collins that abuts the Champlain Towers South property line.
click to enlarge 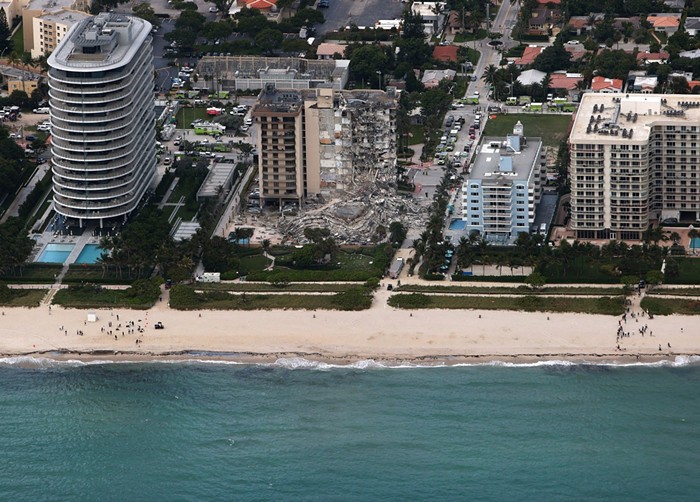 Miami architect Kobi Karp was initially involved in the plans for the 8701 Collins Ave. highrise (far left) just to the south of Champlain Towers South.
Photo by Joe Raedle/Getty
Eighty Seven Park was developed by 8701 Collins Development LLC, an entity managed by David Martin, CEO of Miami-based development company Terra Group. In 2013, Terra Group purchased the land for the project, which included the beloved Biltmore Terrace Hotel property, and threw residents into a tizzy when it demolished the hotel after promising to restore it.

When Eighty Seven Park was up for approval with Miami Beach's Design Review Board in December 2014, Karp was registered as a compensated lobbyist for the project and noted as the architect responsible for the project's design, according to an application obtained by New Times.

But when New Times reached out to Karp this week, the architect said he had no involvement with the design or construction of the project and was only involved at the Design Review Board stage to lobby for zoning approval for the condo.

Karp also said that he was not Eighty Seven Park's architect of record — invoking a term that refers to the locally licensed architect whose seal is affixed to a building's documents and who is responsible for its construction. But in a December 2014 letter from an Eighty Seven Park attorney to the City of Miami Beach, the attorney stated that the building was designed by Piano with assistance from Karp. Karp was named as the architect of record for the project at that time:

One year later, the property's zoning attorney again stated in a letter that the approved plans for Eighty Seven Park were prepared by Piano and Karp.


When presented with that documentation and asked about the conflicting information, Karp seemed to contradict himself, saying that he would not dispute the public record but insisting that he was not the architect involved in the project.

Karp says he was completely removed from the project at a certain point when the developer wanted to use a different architect, but he could not recall when. An application for a zoning variance for Eighty Seven Park that was signed on December 8, 2017, was stamped by architect Jonathan Cardello, who at the time was working for the architecture firm Stantec. Reached by New Times Thursday, Cardello said he could not comment on the property because he is no longer with Stantec.

A spokesperson for Stantec told New Times via email that the firm would cooperate with investigations into the collapse if asked to do so.

"We designed 87 Park as part of a diverse project team of designers, engineers, and contractors. As a leading global design firm, we stand by the caliber of our design work, and we will participate in the official investigations related to this matter when and if asked to do so. We are unable to share any further details at this time," said the spokesperson, Laura Leopold.
click to enlarge

Kobi Karp's distinctive logo can be seen on construction projects across Miami.
Photo by Phillip Pessar/Flickr
Asked why he has not disclosed his initial involvement with Eighty Seven Park during interviews about Champlain Towers, Karp didn't give a clear answer.

"Maybe I was asked not to [disclose it], maybe I was requested not to, maybe I signed NDAs previously on the job — a lot of things could've happened seven years ago," Karp said.

Later, Karp said that he did in fact sign a nondisclosure agreement regarding the project.

"I signed certain NDAs on it and, therefore, I cannot assist you on that," he said, before backtracking to say: "What I said is I may have signed certain NDAs, I might have done certain things, I don't recall. It's been seven years."

In a statement to New Times, 8701 Collins Development LLC denied the allegations that the project may have contributed to the Champlain Towers South collapse.

"8701 Collins Development joins our community in keeping the focus on the victims, the unaccounted for, and their loved ones, and in praising the work of first responders. We are confident that the construction of Eighty Seven Park did not cause or contribute to the collapse that took place in Surfside on June 24, 2021," a company spokesperson said via email.

The company did not respond to questions regarding Karp's involvement or any possible non-disclosure agreements it may have required of him.

Karp isn't the only Miamian making the rounds on TV news without disclosing a potential conflict of interest.


Miami Beach City Commissioner Michael Góngora, an attorney certified in condominium and planned development law, has also been mum about his affiliation with Champlain Towers South in multiple media interviews about the condo's collapse.

Góngora is listed as the registered agent for the Champlain Towers South Condominium Association in state business records, where he appears in the most recent filing from April 2021, as well as the previous filing in February 2020.

The commissioner told New Times that's a mistake, adding that he didn't know until Monday, four days after the tower collapsed, that he was listed as the registered agent. Although he's not entirely sure how it happened, he says he believes it was a clerical error.

While Góngora says he never directly worked with the association, the Becker and Poliakoff law firm where he works was retained as legal counsel by the Champlain condo board about two years ago and continues to represent the association, including in recent news stories about the building's collapse.

Góngora says he attended one board meeting, possibly in 2019, at which he assisted his colleague Kenneth Direcktor with tabulating ballots for an election. Góngora believes that's when his name was added to the association's annual report filed with the Florida Division of Corporations.

Góngora says he has never received compensation from Champlain Towers South and that he does not receive compensation from any of the condo associations he does represent because he is a salaried employee of the firm.

The commissioner says there was no need for him to disclose in media interviews that his firm represents the Surfside condo because "I'm not speaking on anything specific about Champlain...just general kind of law things."

"It's one of those interesting facts that doesn't really change anything," he says.

Similar to Karp, while Góngora had no legal obligation to disclose his association with the law firm representing the Champlain Towers South Condominium Association, that relationship could influence the way he speaks about the association's role in the collapse. Had he provided that context, television viewers would have had a clearer picture of his connection to the story.

To date, it's still unclear what caused the Champlain Towers South collapse and what factors may have contributed to it. Investigators from the National Institute of Standards and Technology, an agency that studied the fall of the World Trade Center after 9/11, say a full review of the Surfside collapse may take years.

Alan Halaly contributed reporting.
KEEP MIAMI NEW TIMES FREE... Since we started Miami New Times, it has been defined as the free, independent voice of Miami, and we'd like to keep it that way. With local media under siege, it's more important than ever for us to rally support behind funding our local journalism. You can help by participating in our "I Support" program, allowing us to keep offering readers access to our incisive coverage of local news, food and culture with no paywalls.
Make a one-time donation today for as little as $1.