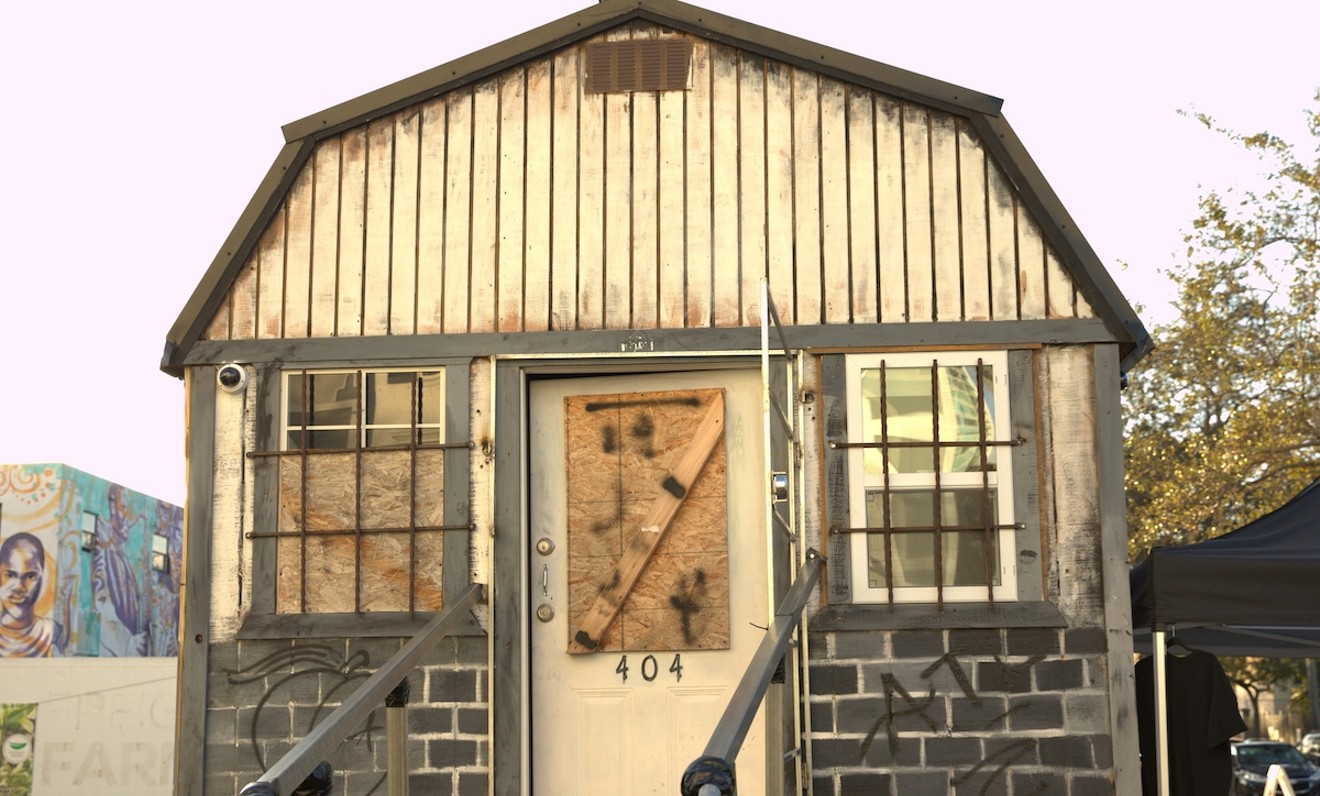 Lil Trap House has popped up in Overtown. Photo by Amanda Barona
It’s a celebration every time Lil Trap House pops up. The travel-size artistic experience curated by T.I.’s Trap Music Museum in Atlanta has arrived in Overtown to highlight Miami’s most revered rap artists through unique works of art and to help promote Black-owned businesses.

The pop-up, located at the corner of NW Second Avenue and Tenth Street, features trap-influenced art pieces featuring the godfathers of the genre: T.I., Jeezy, and Gucci Mane. Visitors start in the living room inside a bando, complete with run-down furniture and a wooden table full of commonplace trap-house tchotchkes: wads of cash wrapped in rubber bands, a box of Newports beside an ashtray filled with butts, blunt wraps, dice, and a scale.

In a few short steps, fans will find themselves in a kitchen blessed by the Trap God himself, Gucci Mane. Nearby is a Sprite bottle with a vat of baby-blue and purple smoke as seen on Future’s 2015 Dirty Sprite 2 album cover. Across the way, a vibrant portrait of T.I. bordered by rubber bands makes for the perfect homage to the original “Rubber Band Man.”

And that's merely a glimpse of what Lil Trap House has to offer.

"Trap music, in general, is the biggest subgenre of hip-hop, and there are trap artists everywhere,” says Krystal "KG" Garner, general manager of the Trap Music Museum. “In Miami specifically, we are an art-based space as well as a music space — and Miami is known for having amazing art."

Although the pandemic curbed last month's Miami Art Week activations, that wasn’t going to stop Garner and the museum’s co-owner, William "Bam" Sparks, from bringing Lil Trap House to the 305. During its six-month tenure in Overtown, the house plans to display art exhibits dedicated iconic Miami rap artists who've shaped hip-hop culture in Florida and beyond.

"Every time you see them, they flewed out or on a yacht or something doing something crazy," Garner says of City Girls. "This is the first time people are seeing this exhibit." 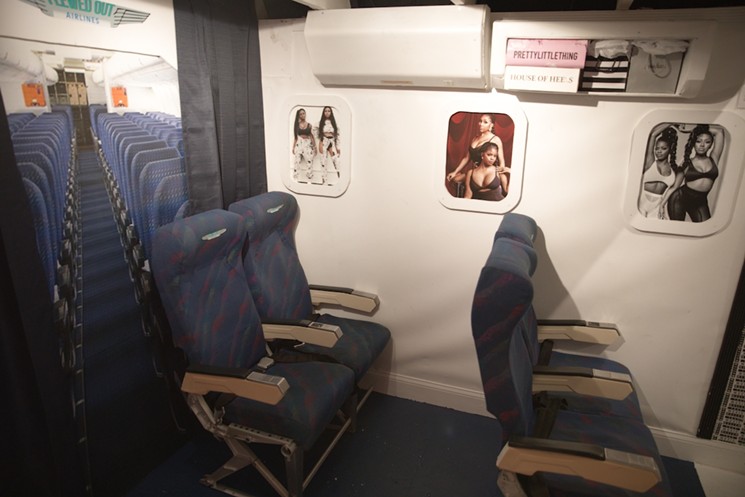 The City Girls' contribution to Miami hip-hop is highlighted inside Lil Trap House.
Photo by Amanda Barona
While the original Trap Music Museum in Atlanta is known for its interactive activations, the Miami pop-up is more limited, owing to the pandemic. Facemasks are mandatory, and each visitor must sign a waiver and undergo a temperature check before entering. There will be a limit of five to ten people in the museum at one time.

Atlanta's Trap Music Museum began as a pop-up that evolved into a multifaceted hub for art and hip-hop. Since its opening in the Bankhead neighborhood in October 2018, the museum has become one of the city’s most prominent tourist attractions, with 6,000 visitors per week prior to the pandemic.

“This was a concept we came up with maybe two or three years ago when the debate came up about who started trap music,” says Sparks, who’s worked alongside with T.I. for over 15 years. “We wanted to have some sort of education piece where people understand the timeline from 2003, when the album Trap Muzik came out, until now. If you go to the Trap Music Museum in Atlanta, you'll see the top features being Tip, Jeezy, and Gucci [Mane]. They're on our Trap Rushmore piece. Once you see that, you'll see the Futures, the Yo Gottis, and everyone else who has a part in the culture."

Lil Trap House previously popped up on the West Coast for the BET Awards, but this marks the first time it's setting up in Miami. The goal: to honor local rap artists through art while shining a bright light on Overtown’s Black-owned establishments such as the Urban and Marcus Samuelsson's recently opened Red Rooster.

“We are looking to do things with one, various Black-owned businesses in the area, and two, doing some art exhibits or live painting exhibits, highlighting local talent,” Garner explains.

Rick Ross and City Girls may be the first honorees, but they won’t be the last. Lil Trap House in Overtown plans to highlight Uncle Luke, Trick Daddy, and Trina. The museum also hopes to get input from the community and showcase exhibits that stay true to Miami’s hip-hop legacy.

"We just want to make sure that anytime we bring Lil Trap House somewhere, we represent the area that we're in," Garner says.

Lil Trap House. 920 NW Second Ave., Miami; liltraphouse.com. Friday and Saturday 2 p.m. to midnight, Sunday 2 to 10 p.m. Tickets cost $20 via liltraphouse.resova.us.
KEEP MIAMI NEW TIMES FREE... Since we started Miami New Times, it has been defined as the free, independent voice of Miami, and we'd like to keep it that way. With local media under siege, it's more important than ever for us to rally support behind funding our local journalism. You can help by participating in our "I Support" program, allowing us to keep offering readers access to our incisive coverage of local news, food and culture with no paywalls.
Make a one-time donation today for as little as $1.