Photo by Xavier Luggage
Miami’s love affair with electronic music spans generations. Synthetic electronic sounds and industrial rhythms have been bouncing around the Magic City for several decades, and in that time, countless locals have stepped forth to share their personal spins on the form. From the thundering booty bass of Uncle Luke and 2 Live Crew to the raunchy electroclash of Avenue D, there’s a long and rich history of Miami-based artists blowing minds and speakers.

As electronic enthusiasts navigate the remains of a post-EDM world, Miami musicians have been quick to reconstruct and reconsider the city’s character as it relates to synthesized tunes. Whether it’s genre pioneers refining their craft, local boys who’ve done well on the international stage, or DJ/producers blurring the lines between ambient music and dance-floor-ready numbers, there’s no shortage of compelling Miami-born electronic music to find in 2019.

(Editor's note: As with New Times’ recent selections for best DJs in Miami, this list does not represent all electronic acts recording and performing in the city. Miami music, much like its residents, is diverse and impossible to encapsulate in a single story.)

Danny Daze. The man known to some as “Danny from Miami” is coming off as great a year as any artist could hope for. From mixing alongside dance music legends to shining on his own with a widely seen Boiler Room set, Danny Daze and his trademark brand of psychedelia-drenched electro reached more ears in 2018 than ever before. Luckily for us, Daze has continually shown Miami love during his rise through the electronic music ranks. In December, he appeared as a surprise guest at a warehouse rave jointly hosted by his record label Omnidisc and Space Tapes. And as the lineup for the Omnidisc stage at III Points suggests, he’s repeatedly advocated for local talent and up-and-coming Miami mixers such as Sister System and Jonny from Space. Following his III Points closing set with Mariel Ito, AKA Maceo Plex, Miamians will be able to hear Daze on his new collaborative EP Pulmotor and catch him together with DJ Tennis and Anshaw Black at the next Omnidisc night at Club Space on March 30.

Nick León. No conversation about underground Miami music — electronic or otherwise — is complete without mention of Nick León. Although he cut his teeth crafting beats for South Florida rappers such as Denzel Curry and Robb Bank$ from his bedroom, León’s spent the latter half of the 2010s forging his own identity as an experimental producer and label head with Space Tapes. His latest release, the collaborative "Limited Only" single with Space Tapes artists opal° and Bear, sounds like the most potent blend yet of León’s percussion-heavy past with the atmospheric IDM and techno acts he cites as influences. And people are noticing: In addition to working with Warp Records artist GAIKA, León and Bear appeared in Berlin last year for the Red Bull Music Academy. More recently, it was announced an unreleased track of León’s will be included on the Laurel Halo-helmed edition of mix series DJ-Kicks. Run, don’t walk, the next time you see his name on a lineup. 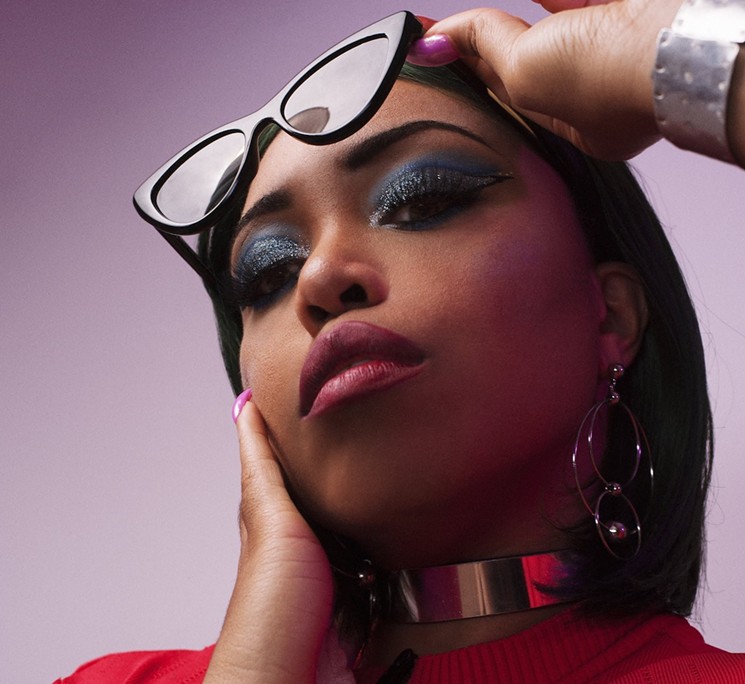 Suzi Analogue
Photo by Chelsey Croucher
Suzi Analogue. Suzi Analogue is a proper jack-of-all-trades: She sings, she produces, she DJs, she manages the label Never Normal Records, and she even finds time to assemble events for Cassette Store Day. But however impressive Analogue sounds on paper, she’s even more so on record: Look no further than her beat tape series Zonez, where the prolific polymath readily alternates between intensive foot workouts and relaxed, moody pieces without missing a step. Although Analogue hails from Baltimore, her ability to seamlessly switch up the mood puts her right at home in Miami, a city as strange and over-the-top as it is idyllic.

INVT. If Miami club dwellers have seemed a little more fashionable as of late, you have INVT to thank. Likewise, if you’ve walked into Floyd at any point in the past year and found yourself bewildered by a startlingly young duo generating blissed-out beats on the fly, you can thank INVT for that too. Pronounced "innovate," INVT is the brainchild of childhood friends Luca Medici and Delbert Perez. Even if you haven’t caught the pair in action, you’ve likely seen the INVT logo — a lone palm tree surrounded by barbed wire — at some hip Miami nightspot or another. Beyond the appeal of its handmade clothing line and DJ sets, INVT has carved out a space in the Miami music scene chiefly on the strength of immaculate productions and onstage presence. Undeniably influenced by "chill" electronic acts of the early 2010s (think Disclosure, Toro y Moi, XXYYXX, and the like), INVT takes its predecessors' sound and imbues it with a pinch more verve; look no further than the playful Momentary Pleasure EP for reference. INVT's SoundCloud is littered with tags ranging from "Miami footwork" to "house" and even some "acid" for good measure. Whatever you want to call INVT’s sound, it’s distinctly its own.

Greg Beato. If you want overlooked bangers that’ll have trainspotters begging for the track ID, you could do far worse than starting with Greg Beato’s discography. The Miami-residing mixer and producer has cultivated a fan base among the headiest of music geeks with finely tuned records guaranteed to make ears perk up. Working with clattering hi-hats and pounding kick drums as seamlessly as he does downright silly disco basslines, Beato has an assortment of dance music tricks up his sleeve. He recently opened for Actress at Floyd, ably setting the stage for the English DJ/producer. Miamians would be wise to keep their eyes peeled for the next time Beato gets behind turntables in their vicinity.  Sel.6. Between its left-of-center releases and events, Space Tapes has comfortably established itself as a home for adventuresome South Florida musicians challenging the definition of acceptable club music. Sel.6 is one such artist. The DJ/producer and Broward-based artist regularly makes the trek to Miami to share her brand of experimental club music with the city’s partygoers. Sel.6’s music adeptly mixes drum ‘n’ bass alongside high-pitched vocals, ambient textures, and the occasional filter that wouldn’t sound out of place on a lo-fi house record. Her EP Siren Songs captures a mood going around Miami at the moment, where a packed, sweaty venue can seem as cavernous as the emptiest expanse. 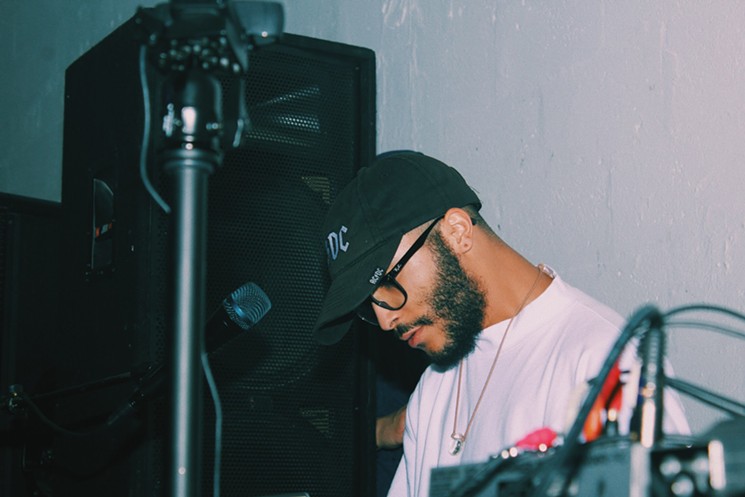 Bear
Photo by Xavier Luggage
Bear. Is there a genre better suited to sharing romantic woes than synth-pop? As many young English bands figured out decades ago, the contrast of lovelorn lyrics against shimmering melodies and infectious beats is as effective as it gets for capturing the grief — and irrational hope — of a broken heart. If his Cruise Control EP is any indication, Space Tapes artist Bear fully understands the power behind pairing dreamy synths with pleading vocals. Despite its brevity, Cruise Control leaves a memorable impression with a sound reminiscent of early Blood Orange records. If any Miami artist is poised for a breakthrough year, it’s Bear.
DJ Earl. DJ Earl cut an imposing musical figure long before he moved to Miami. As a member of Chicago’s influential Teklife collective, Earl helped propagate the popularity of footwork — an absurdly fast genre designed to inspire equally frenetic dance moves — out of the Midwest and into the world at large. Since moving south, he’s wasted no time immersing himself in Miami’s local scene. In addition to collaborating on songs with INVT and Paperwater, Earl has kept busy with the release of his 2018 album, W3RK DAT, as well as recent singles “So Cold” and “OnSumNuShyt.” With his history of collaboration and Miami’s wide selection of talent, Earl is a welcome addition to the city’s creative community.

Otto Von Schirach
Photo by Stian Roenning
Otto Von Schirach. As long as Otto Von Schirach continues recording and performing, New Times will continue praising. The “cold-blooded reptile from Miami-Dade” spent 2018 solidifying his legacy with a series of EPs — Draculo, Captive Earth People / Flying Saucer, and Breakcore Beefcakes — and tour dates that took his infamously insane live show around the world. Thankfully, the bass music enthusiast and Triangle Family figurehead has remained active through 2019 with performances at III Points and Rat Bastard’s International Noise Conference, as well as the requisite Valentine’s Day slime-wrestling show at Sweet Liberty. In dispiriting times like these, we need all the weirdness we can get, and Von Schirach has it in abundance.

Arthur Baker
Photo by Karli Evans
Arthur Baker. Arthur Baker still knows how to bring the goods. More than three decades after changing the direction of pop music with “Planet Rock,” the electro maestro and Miami transplant continues to forge floor-fillers worthy of the high standard set by his pioneering remix and production work. Baker put out a number of collaborative efforts in 2018, including “Now Hand Clap” with Club Space fixtures the Martinez Brothers, as well as “On a Mission” with Rocker’s Revenge. In addition to remixes from the likes of Kompakt label head Michael Mayer and disco legend François Kevorkian, a live rendition of “On a Mission” by Baker and Rocker’s Revenge proved one of the standout moments from 2018’s edition of Damian Lazarus’ beloved Miami Music Week gathering, Get Lost. If you spot Baker’s name on a lineup, don’t miss your chance to catch a master at work.
KEEP MIAMI NEW TIMES FREE... Since we started Miami New Times, it has been defined as the free, independent voice of Miami, and we'd like to keep it that way. With local media under siege, it's more important than ever for us to rally support behind funding our local journalism. You can help by participating in our "I Support" program, allowing us to keep offering readers access to our incisive coverage of local news, food and culture with no paywalls.
Make a one-time donation today for as little as $1.