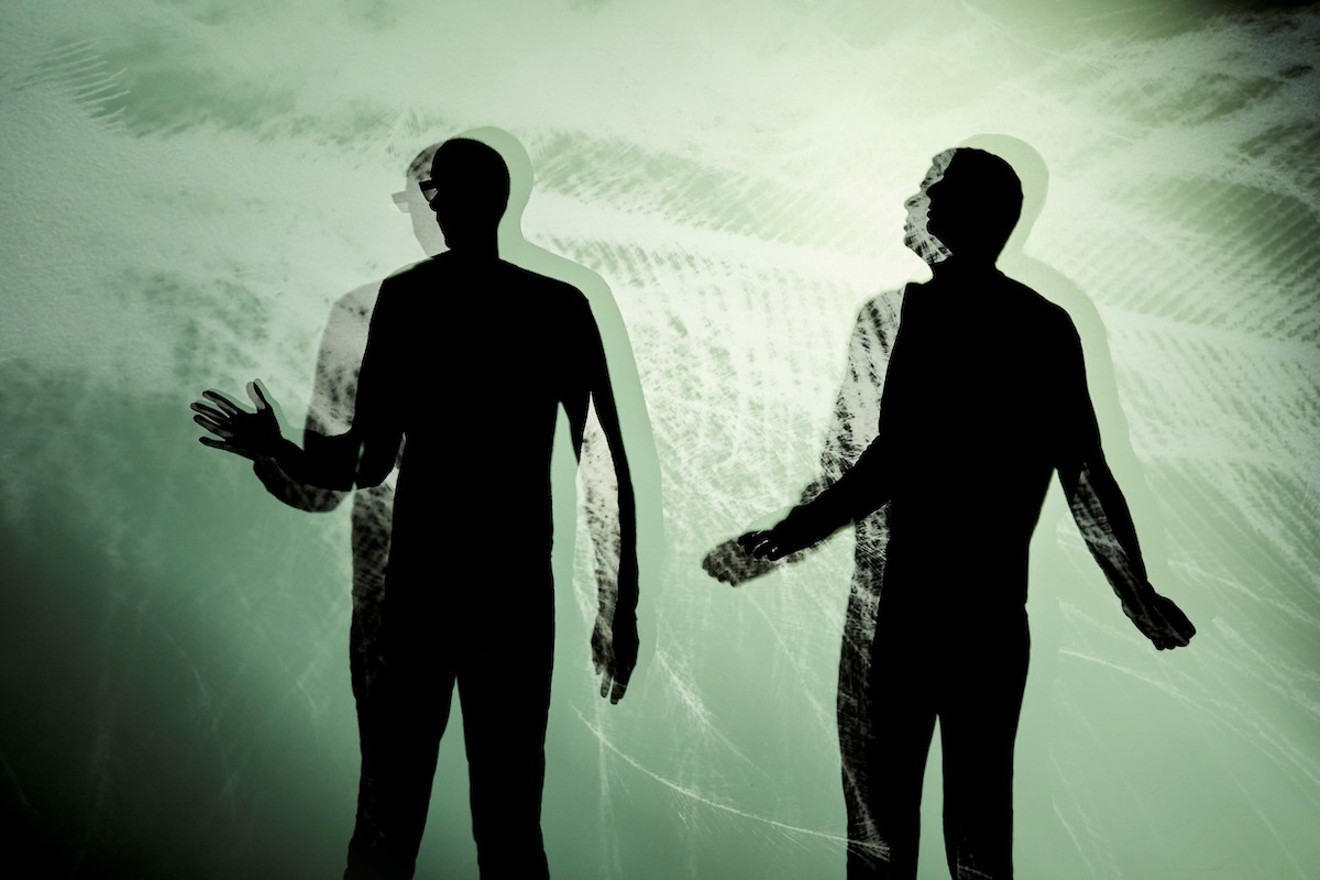 The Chemical Brothers headline Zamna Festival during Miami Art Week. Photo by Hamish Brown
Art Basel Miami Beach 2022 is a big deal. This year marks 20 years since the Swiss fair came to town, bringing with it plenty of art, performances, an increasing tally of crypto-related things, and, yes, an absolutely insane number of parties.

While Art Basel's official dates are December 1-3 at the Miami Beach Convention Center, the surrounding parties flow throughout the entire Miami Art Week. And the parties are everywhere and everything, ranging from free public spectacles to ultra-private, invite-only affairs.

Amid hundreds and hundreds of options, here are the ten best parties the general public can attend — invite not required.

Elemental with Malaa, Duke Dumont, and Others

Elemental has all the elements for a good time for crypto-loving denizens. Billed as having one of the largest collections of NFTs and with daytime talks focusing on tech, policy, virtual reality, and seemingly everything in between, Elemental nighttime programming will be a time to turn up. DJs slated to perform include masked French producer Malaa (November 30), English producer Duke Dumont (December 1), RL Grime (December 2), and Madeon (December 3). 9 p.m. Wednesday, November 30 through Sunday, December 4 at Elemental Compound, 59 NW 36th St., Miami; elemental.miami. Tickets cost $25 to $70 via elementalmiami.xtixs.com.

Alesso, Black Coffee, Martin Garrix, and Others at LIV

The good vibes of Miami Art Week only get elevated with good beats. And on the world-class DJ front, LIV will be overflowing with thumping goodness all week long. Its Basel Edition string of shows kicks off on Wednesday, November 30 with a set by Swedish kingpin Alesso. Also gracing the decks through the week are Black Coffee with a special appearance by street artist Alec Monopoly (December 1), eternal partiers the Chainsmokers (December 2), and Dutch producer Martin Garrix (December 3). 11 p.m. Wednesday, November 30 through Sunday, December 4 at LIV Nightclub, 4411 Collins Ave., Miami Beach; livnightclub.com. Tickets cost $50 to $115 via liv.tixr.com.

Hurry Up Slowly at Toejam Backlot

The Hurry Up Slowly event series has made waves in recent months with a DJ-loaded Divine Voyage in Bimini and shenanigans aplenty for this year's Miami Race Week. For its Miami Art Week happenings, the worlds of art, music, and web3 are coming together for four nights of shows at Toejam Backlot in Wynwood. Headliners include Blond:Ish (November 30), CamelPhat (December 1), Gordo (December 2), and, closing things out are the Martinez Brothers (December 3). 9 p.m. Wednesday, November 30 through Saturday, December 3 at Toejam Backlot, 150 NW 21st St., Miami; artweek.hurryupslowly.io. Tickets cost $30 to $100 via get-in.com.

Usually a Miami Music Week mainstay, Epic Pool Parties takes over the Sagamore for its Miami Art Week edition. Expect the dazzling deco property to take things to another level with its "Into the Wild (Future)" theme with audiovisual displays from Jonathan Cowan Productions and Electric Ibiza. Pre- or post-stroll hit one of the pool parties, with the slate including Tiga (November 30), Hi-Lo (December 2), Oscar G (December 3), and Sasha and Danny Tenaglia (December 4). Wednesday, November 30 through Sunday, December 4 at the Sagamore South Beach, 1671 Collins Ave., Miami Beach; theepicpoolparty.com. Tickets cost $40 to $150 via eventbrite.com.

SoundCloud Next Wav at Supercar Rooms

With South Florida being the epicenter of the SoundCloud rap scene, it only makes sense that the music streaming service makes its way down to Miami for the week. It's taking over Supercar Rooms in Wynwood on December 1 for a day-into-night event that starts with networking and mingling opportunities for artists looking to grow their careers. At night, enjoy live performances by J.I.D, KenTheMan, and Armani White, along with DJ sets by DJ PeeWee, Spineli, and Soulection's Joe Kay and host Supa Cindy of 99JAMZ. 6 p.m. Thursday, December 1, at Supercar Rooms, 2022 NW First Ct., Miami. Admission is free with RSVP via soundcloudnextwavmiami.splashthat.com. 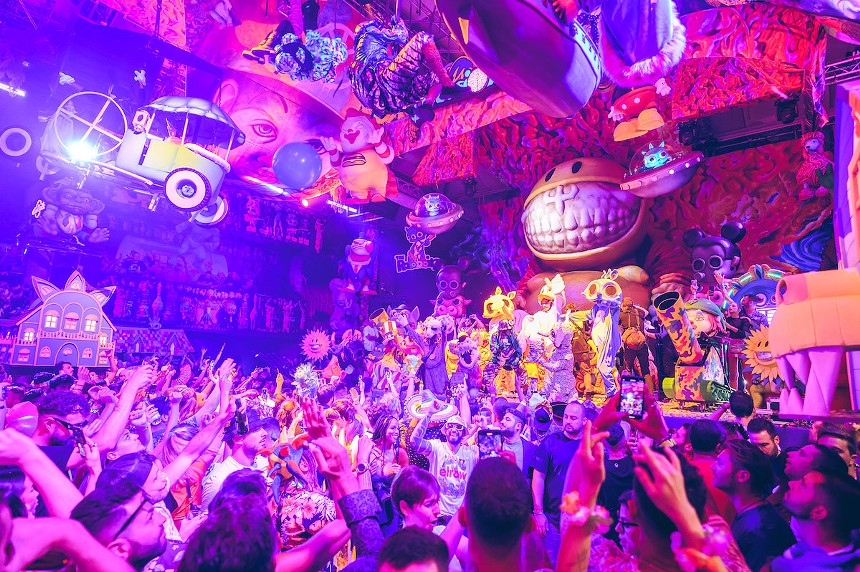 Delusionville promises to be an art-meets-music spectacle like no other.
Photo by Toni Villen

Perhaps you've heard of the über-vibey, free-spirited Zamna Festival that has become a staple in Tulum? Well, it's coming to Miami for the very first time in the form of a three-day experience. Whereas the Tulum festival takes place in a jungle-meets-cenote landscape, the Miami version is going down with panoramic water vistas at Island Gardens. It starts with a set by the legendary English electronic duo the Chemical Brothers on December 1. On December 2, Miami fave Diplo will perform. Artbat, CamelPhat, and Mathame will close things out on December 3. 6 p.m. Thursday, December 1 through Saturday, December 3 at Island Gardens, 888 MacArthur Cswy., Miami; zamnafestival.com. Tickets cost $70 to $150 via mrnicevip.com.

A free performance by 21 Savage? Yes, it's true, and it's that 21 Savage with hits like "My Life," "Runnin," and "Rockstar" with Post Malone. The superstar Atlanta-based rapper will perform as part of Michelob Ultra's Courtside Challenge event. In addition to a set by 21 Savage and Miami's own DJ Irie, artist-created NBA team cans will be unveiled, created by the likes of Chuck Anderson, Bigshot Robot, and Eric Elms. For basketball fans, there will be some hoops too. Heat legend Alonzo Mourning and Chris Brickley will face off against fellow legend Gary Payton and WNBA/Los Angeles Sparks player Nneka Ogwumike. 7 p.m. on Thursday, December 1 at Maps Backlot, 301 NW 23rd Street, Miami. Admission is free with RSVP via rsvpify.com.

Pussy Riot at the Institute of Contemporary Art, Miami

You know who really hated all of Vladimir Putin's bullshit long before it was a global norm? The Russian punk collective Pussy Riot. In what is sure to be one of the most unique musical happenings on planet Earth, the group will perform at ICA on December 2. The show is presented by NFT collective CryptoPunks, which will unveil its piece, Punk #305, at the event. 7 p.m. Friday, December 2 at the Institute of Contemporary Art, Miami, 61 NE 41st St., Miami; icamiami.org. Admission is free with RSVP.

Promising to "make your heart swell," Rakastella is back at Historic Virginia Key. Since its first fest in 2017, this sundown-to-sunrise party — from Innervisions and Life & Death — has kept the warmest of vibes. This year's performers include Diplo, Carlita, DJ Boring, DJ Tennis, Seth Troxler, and Quest. Adding to the inclusive vibes are clubbing collective He.She.They and Miami's Where Are My Keys which will host the event's two stages. 4 p.m. Saturday, December 3 at Virginia Key Beach Park, 4020 Virginia Beach Drive, Miami; rakastella.com. Tickets cost $60 to $140 via ticketfairy.com.
KEEP MIAMI NEW TIMES FREE... Since we started Miami New Times, it has been defined as the free, independent voice of Miami, and we'd like to keep it that way. With local media under siege, it's more important than ever for us to rally support behind funding our local journalism. You can help by participating in our "I Support" program, allowing us to keep offering readers access to our incisive coverage of local news, food and culture with no paywalls.
Make a one-time donation today for as little as $1.