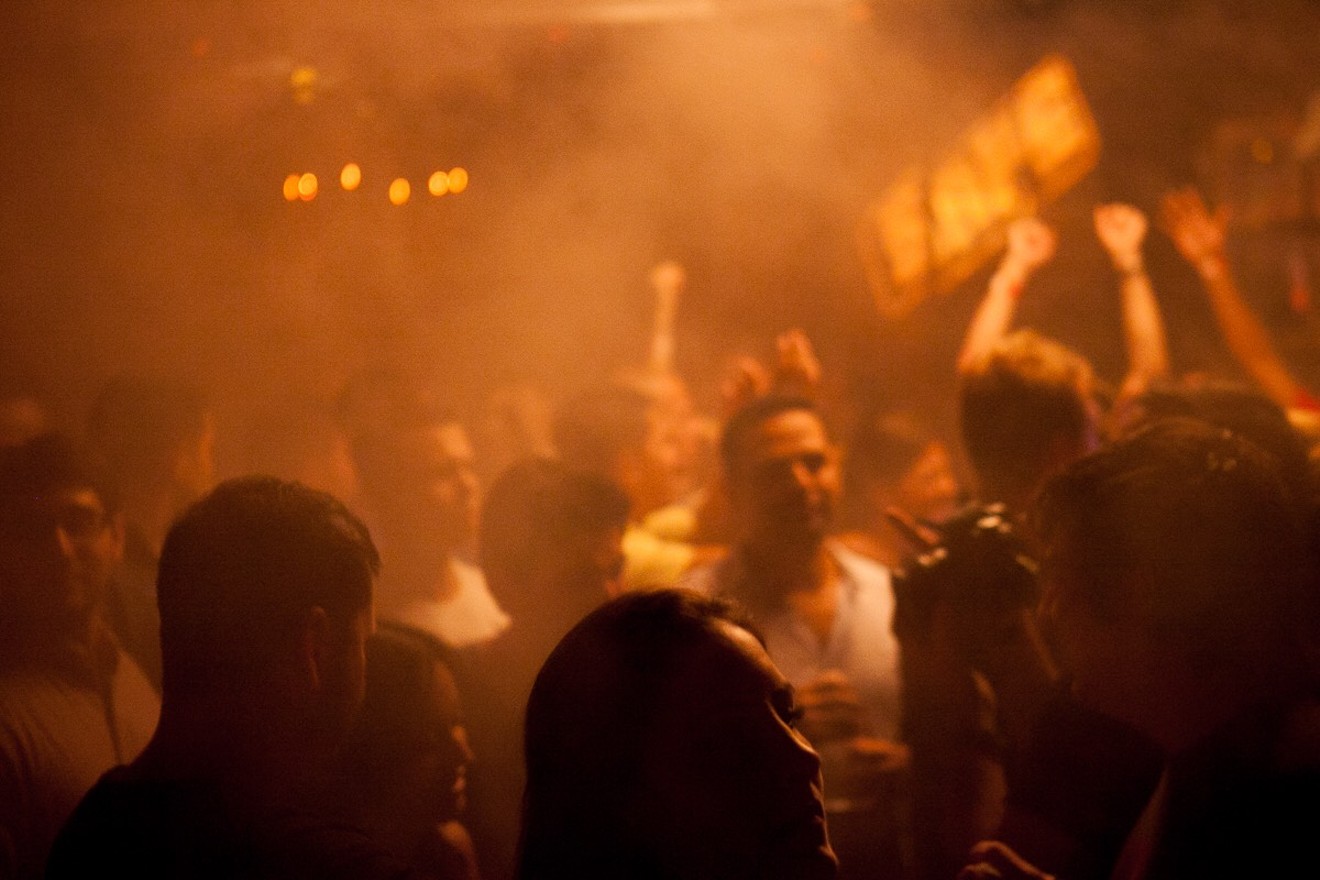 SAFE is a decade old. Courtesy of Cafeteria Films
In a nightlife scene as fickle and amnesic as Miami's, it's easy to forget there wasn't much going on musically outside of commercial Top 40 hits at clubs in the mid-2000s. That's why SAFE Miami today is inseparable from the history and evolution of the local underground dance music scene.

Since launching SAFE in 2007, founder Diego Martinelli has steadfastly helped broaden Miami's musical horizons through a stream of parties showcasing some of the planet's most iconoclastic, cutting-edge artists and sounds. Over the years, SAFE has introduced Miami to international cult heroes such as DJ Sprinkles, Optimo, Ben UFO, and Joy Orbison, all in the intimate confines of Wynwood's Electric Pickle.

Indeed, it's been a transformative decade for dance music in the Magic City, one that Martinelli and crew can proudly commemorate as they mark their tenth year on the scene this weekend. And it wouldn't be a SAFE tenth-anniversary celebration without a whopping lineup of world-class selectors, including U.K. luminaries Ben UFO, Optimo, and Secretsundaze, alongside home-team favorites like DJ Three and Mystic Bill.

Ahead of this two-night extravaganza at the Electric Pickle, New Times spoke with Martinelli about SAFE's first decade, the crew's imminent expansion to NYC, and what's in store for the weekend festivities.

New Times: How has SAFE continued to provide singular musical experiences for a decade?

Diego Martinelli: I feel that having made it this far can mostly be attributed to a love for the dance-floor experience and for the people. Music is powerful, and I learn more about this all the time. It’s been trying at times, largely due to that fickleness you’ve referred to, but the community aspect is what keeps me in it. Few things motivate quite like giving others a place to dance, enabling happiness in them. I’d say another no-brainer reason we’ve been around this long are the remarkable humans in our crew. They’ve egged me on and validate the madness. I am specially grateful for my friends Patrick Walsh and Ramon Crespo for their partnership and major contributions to this project.

When you launched SAFE, Miami's underground house and techno scene was still in its infancy. How do you think the scene has evolved, and what role did SAFE play?

Well, the night existed at Circa 28 prior to it evolving into the Pickle, so we probably had a role in inspiring what continued to happen in that space. The building and atmosphere definitely played a huge piece. Soon after we got there, we invited the other few organizers in the city at the time to do events there too. For a brief time, Miami’s entire techno scene existed in this one small building. I think the evolution of Miami’s music scene has had many ups and downs and is not a sexy case study at all, unfortunately. Live-music organizers and venues are currently scarce, and pop-ups are way down from recent years. Independent music can be a very tough business in Miami. Luckily, we still got a few fighters and sharp ones out here.

You've booked an eclectic variety of artists over the years, representing everything from house and techno to future bass and lDM. When push comes to shove, what defines the music SAFE is interested in showcasing?

The only requisite in our music policy has always been to bring out artists with sincere intentions and a sense of humanity. Profile and name recognition have never mattered since we’re a community-driven project, not a business. We’ve been inspired by lots of different types of music, so in this regard, it’s remained diverse within a relative range. We aim to work with noble people who sincerely love what they do. Most of the recurring artists we invite out are individuals that have become good friends. They’re people that we welcome in our homes.

Beyond the music, would you say there's a particular ethos to the project?

Be afraid that things just might work, because then you gotta put in work. We’re always in flux and have learned to befriend change. We are not just one thing, I suppose. Ten years in, it’s still a party, a vessel for happiness and getting loose. It’s also an opportunity to let go and connect with ourselves and others on the floor. I take great pleasure in serving as an extension of other artists and helping enable a platform. I am more than ever in love with the music experience; it’s a relationship that only grows. Dancing is an involuntary emotional response to the sounds. This is why I find dance music to be so important. I find it necessary for my health and sanity to dance and lose myself in the music on a regular basis. Music makes room for pain. I love seeing others immersed and swimming in the thick of music.

Has that vision and its execution evolved in the past ten years?

The project has definitely evolved. What started as mostly about shared enthusiasm for dance music and bragging about the quality of our sound systems went on to become something that has enabled much learning about the human condition. The underground dance floor is a fascinating situation, on psychological and sociological levels. One of the most important functions of our nights is to serve as a safe space, an intersectional place and situation at which all are welcome as they are.

What are some memorable moments from these past ten years' worth of events and artist performances?

I don’t want to give you a bullshit answer about how they were all equally special. The truth is most nights are actually pretty fantastic. For this reason we’re fortunate, and the baseline for experience value is rather high. The first night that usually comes to mind for me is [James] Holden’s five-hour set at our fifth-birthday closing. I struggle to find words to describe all that was felt that night. Every night with DJ Sprinkles has been a gift and complete departure of mind. Roman Flügel also, every damn time, puts on a fucking blinder that makes one contemplate existence. Earlier this year, Black Merlin laid down an unbelievable set that I’d pay top dollar to experience again. Another was a superb evening with Andy Stott and the Modern Love crew. I could keep going, obviously. Other personally memorable ones were not perfect nights, but still special. The first time we brought Optimo over, only about 40 people turned up. I was so embarrassed until I saw the smiles on their faces around the room. Levon Vincent’s first time had ten people in attendance, given it was early in his rise and a school night. It was more than worth it just to be able to connect with him. Today I cannot exaggerate how fortunate I feel to have had a part in creating these experiences and sharing the good times with some lovely people.

What's next for SAFE? Can Miami expect continuity as far as local events? And what can NYC expect now that SAFE will operate there?

SAFE will always exist in Miami. Our frequency is currently two to three times monthly; that likely will not change much. The move to NYC was planned a few years back. I've been living in Brooklyn since late last year, splitting my time between both cities. I'm involved in a new venue project up there that will be announced in a few months. Living in New York has definitely brought on exciting new waves of inspiration. It’s an entirely different landscape. SAFE will definitely be creating small events up there in 2018, including pop-ups in temporary spaces. The ideas are still slowly coalescing and coming to form.

So what do you have planned for the tenth-anniversary weekend?

We reached out to a lot of people we really love for the occasion, though many couldn’t make the date. Due to the Pickle’s size and budget, we decided to stretch the event into a weekender. Optimo are flying in from Glasgow just for this one gig. They are among my greatest inspirations on both musical and human levels. Their influence helped me define my relationship with music. When I asked them to headline the tenth, they responded immediately, stating that it would be an honor. I regard them as teachers and could not be more grateful for their friendship. We kindly thank all of our supporters, patrons, and extended family. I bow to them in deep gratitude and respect. Let us rave together this weekend and for the rest of this life.

KEEP MIAMI NEW TIMES FREE... Since we started Miami New Times, it has been defined as the free, independent voice of Miami, and we'd like to keep it that way. With local media under siege, it's more important than ever for us to rally support behind funding our local journalism. You can help by participating in our "I Support" program, allowing us to keep offering readers access to our incisive coverage of local news, food and culture with no paywalls.
Make a one-time donation today for as little as $1.
Sean Levisman