Thrift Shop Courtesy of Thrift Shop
The busy season in Miami brings cooler weather, thirsty snowbirds, and a new cast of venues vying for a slice of the action. To help you get ahead on partying, New Times rounded up eight of the city's most anticipated, unexpected, and buzz-worthy bar and nightclub openings. Now that Miami Art Week and Miami Music Week are just around the corner, consider this your fresh guide to local nightlife's most wonderful time of the year.

Boombox
Courtesy of Boombox
Boombox. Hospitality veteran Ben Potts (Beaker & Gray, Mason Eatery) co-owns and helms the bar at this loosely '90s-themed concept opened in the space formerly occupied by Midtown crown jewel Bardot. A year-and-a-half in the making, Boombox picks up where its predecessor left off, parlaying its music-heavy legacy by packing its programming full of live local nights and a rotation of mainstay DJs such as Patrick Walsh and A-Train throughout the week. Though Potts is confident Bardot was "tried and true," he acknowledges a few elements needed improving. He and the Boombox team began by paring down and streamlining the intimately sized interior and expanding the bar to alleviate the service bottleneck. And to be more inclusive and less of a "cool kids' club," he says, Boombox won't charge a cover except for special events. "I think a lot of places take themselves a little too seriously," Potts says. "I just really wanted to make something that was a lot of fun." 3456 N. Miami Ave., Miami; 305-814-4548; boomboxmiami.com. Open daily 5 p.m. to 3 a.m. Brigitte
Courtesy of Brigitte
Brigitte. Amir Ben-Zion is a self-described "sucker for projects." His now-retired late-night restaurant Gigi and next-door music venue Bardot were instant hits preceding the whirlwind of Wynwood, while the music festival he , III Points, has further pushed Miami's cachet as a cultural hub. Most recently, Ben-Zion picked up food-and-beverage duties at the Vagabond Hotel, a beautifully restored MiMo District gem he affectionately describes "like a little locals' Standard [Spa] for the Upper Eastside." In addition to revamping the hotel restaurant, pool bar, and event programming, Ben-Zion carved out a whole new interior lounge space that's even cozier than its namesake. Unlike the old Bardot, which specialized in impeccably curated live music, Brigitte is too petite for a dance floor. Instead, consider it more of a "late-night living room," he says, complete with a pool table, full cocktail bar, and dimly lit sofa seating ideal for whispered conversations. 7301 Biscayne Blvd., Miami; 305-400-8420; thevagabondhotelmiami.com. Open daily 8 p.m. to 1 a.m. or later.
click to enlarge

Sidebar is now Kindred.
Courtesy of Kindred
Kindred. Consider it Sidebar 2.0. What was initially meant to be an eight-month pop-up bar launched by nightlife hitmakers Jason Odio (Baby Jane, Ariete) and Raul Sanchez (Peachfuzz, Bar) in late 2014, the sprawling venue on the western fringes of Brickell was an instant success until it closed its doors this past September. But it wasn't the end for Sidebar — just a metamorphosis. " never really got the investment or the buildup that it deserved," says Odio, who still owns the newly relaunched project, now called Kindred. According to Odio, Sidebar continued drawing crowds, the pop-up kept getting extended, and it became a challenge juggling the programming and staying on top of the bookings. Now that the team has secured a longer lease, Odio and Sanchez regrouped and reopened an "elevated concept across the board." From the furniture to the sound system and entertainment, "we didn't leave any stone unturned," he says. The indoor/outdoor space will be heavily music-focused, with an emphasis on bigger acts supported by local talent and some nights offering independent programming inside and outside. "'Kindred' stuck because of the meaning," Odio says of the name. It's a sonic sanctuary, "an elevated space for all of our worlds to collide." 337 SW Eighth St., Miami; 786-703-6973; facebook.com/akindredspace. Open Friday and 9 p.m. to 5 a.m. 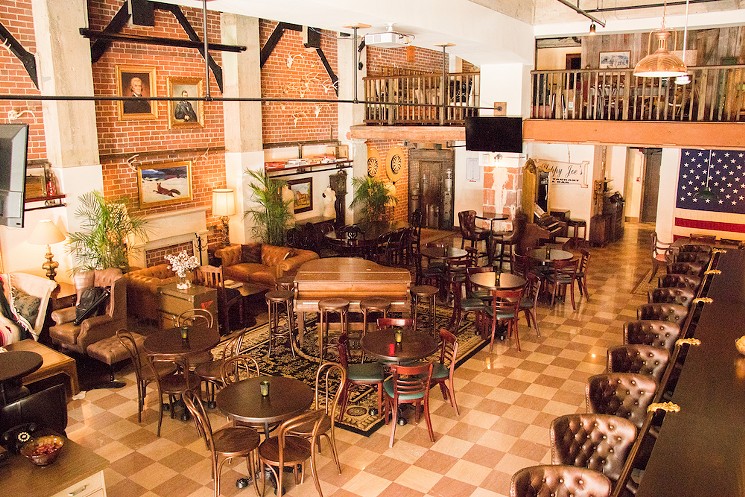 Lost Boy
Courtesy of Lost Boy
Lost Boy. Midcentury Southwest Americana is the vibe at this former downtown denim purveyor-turned-watering hole opened over the summer by partners Randy Alonso and Chris Hudnall, who boast retail and nightlife expertise, respectively, and joined forces for this no-nonsense neighborhood cocktail bar that pairs comfort and style. Pool, piano, darts, and board games fill the two-level, 2,600-plus-square-foot space whose various nooks and surfaces are adorned with relics from Alonso's personal history, including vintage pieces from his family in Cuba. In keeping with the cowboy-cool motif, prices are relatively relaxed, with properly swizzled cocktails, such as the 1792 old-fashioned, running $12 and half-pint beers going for $5. 157 E. Flagler St., Miami; 305-372-7303; lostboydrygoods.com. Open noon to 2 a.m. Monday through Saturday, noon to 10 p.m. Sunday. Courtesy of Pizza & Beer
Pizza & Beer. From the team behind Wynwood stalwart Wood Tavern and Allapattah's live-music darling Las Rosas, Pizza & Beer rounds out owner Cesar Morales' collection of successful bars and restaurants as an "intentionally straightforward pizza joint meets ." Located in the heart of Wynwood, the indoor/outdoor space features massive 24-foot-long tables perfect for large gatherings and striking up conversations with neighbors. Though it won't host DJs or other forms of live music like some of his other venues, Morales says the curated playlists and "chill-spot" vibe make Pizza & Beer a welcome respite from the surrounding chaos. "It's going against the grain in that way," he says. "It's a break from the party." Still, with a full bar, a mix of local and craft beers, and slices from the popular Pizza in Fuga truck, Pizza & Beer aims to live up to its name, a reliable combination any day of the week. 144 NW 23rd St., Miami. Open daily noon to 2:30 a.m. beginning Thursday, December 6. Official opening in late January 2019.

Thrift Shop
Courtesy of Thrift Shop
Thrift Shop. Enter through the front of an actual thrift shop filled with vintage finds, swing back the fitting-room doors, and find yourself in a retro speakeasy born from a long line of gritty downtown Miami bars. Travis Rogers was a manager at this spot back when it was called Railroad Blues. After years of trying to scoop up (it became the now-defunct Blind Pig in the interim), Rogers can finally call it his own. Formerly music director at Heart Nightclub and a nine-year marketing veteran at Club Space before that, Rogers united with three other partners, including the owners of the neighboring nightclub and the head mixologist from 1-800-Lucky, to create a laid-back indoor/outdoor joint with a lived-in vibe. Expect '80s, '90s, and early-'00s hits; open-mike nights; and mixed-format weekends, along with craft beer, specials on PBR four-packs, and mixologist Aramis' craft cocktails, such as the Flight for your Right, made with gin, maraschino liqueur, crème de violette, and lemon. 28 NE 14th St., Miami; 786-261-1496. Open Thursday through Saturday 7 p.m to 5 a.m.
KEEP MIAMI NEW TIMES FREE... Since we started Miami New Times, it has been defined as the free, independent voice of Miami, and we'd like to keep it that way. With local media under siege, it's more important than ever for us to rally support behind funding our local journalism. You can help by participating in our "I Support" program, allowing us to keep offering readers access to our incisive coverage of local news, food and culture with no paywalls.
Make a one-time donation today for as little as $1.