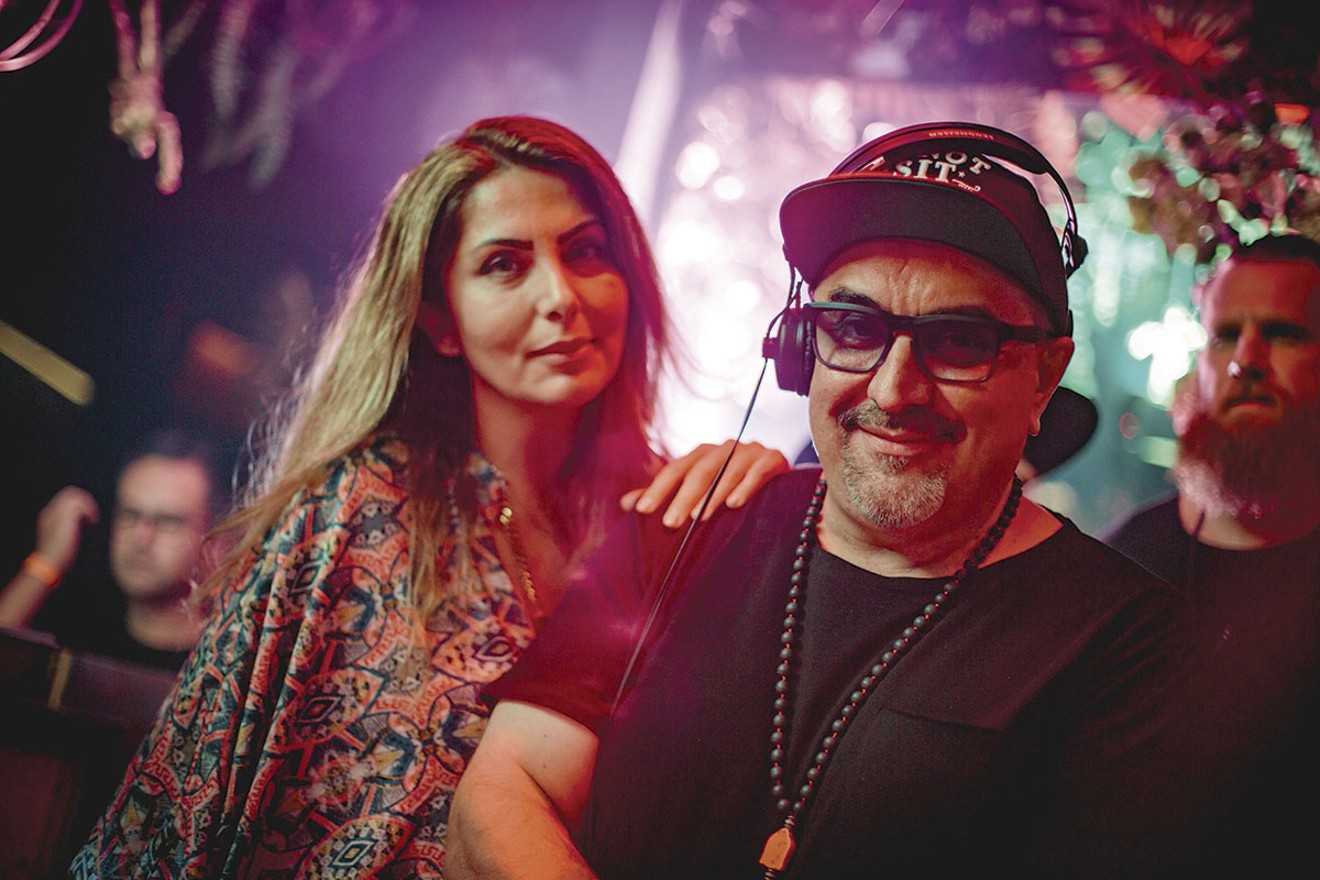 Do Not Sit on the Furniture's Megan and Behrouz Nazari. Photo by Lito Vidaurre
Historically, Miami Music Week is the most lucrative week of the year for nightclubs across the city. World-renowned DJs flock to the area to spin at local venues, luring visitors from around the globe. Revenue from cover charges and bar sales provides enough of a cash bump for nightlife venues to weather the slow summer months.

But a cluster of popular nightclubs on South Beach just saw that windfall vanish before their eyes, courtesy of the City of Miami Beach.

On Monday, in response to several incidents over the weekend — including two separate shootings on Ocean Drive that left five people wounded — Miami Beach Mayor Dan Gelber announced a state of emergency and imposed a midnight curfew covering all of South Beach that will run through Sunday, March 27. The curfew requires that businesses, including nightclubs, to close from 11:59 p.m. to 6 a.m. and give patrons enough time to get off the streets by midnight.

"What we [would have made] this week is the bread and butter for us and our employees," laments Megan Nazari, co-owner of the 17th Street nightclub Do Not Sit on the Furniture. "Miami starts to get busy after midnight, and we're known to be a nighttime nightclub or not a dayclub."

Though subject to the curfew, Nazari's venue is far removed from the spring break crowds that throng Ocean Drive. Moreover, Do Not Sit caters to a niche audience, attracting partygoers who seek the kind of house and techno music you hear at party destinations like those in Ibiza and Berlin.

In other words, Panama City Beach this ain't.

The distinction is of no help to business owners like Nazari who feel they're being unfairly targeted over the incidents that plague Ocean Drive. Do Not Sit on the Furniture is one of more than a half-dozen clubs that are located within the boundaries of South Beach but off Ocean Drive, including Story, Treehouse, XXIII Club, Kill Your Idol, Eme, Mr Jones, Mynt, and Exchange.

"We really need to start a nightlife coalition," says Nazari, who views the current slate of Miami Beach city officials as anti-nightlife and unwilling to consider the grievances of local businesses trying to stay afloat after the many obstacles they've faced since the onset of the pandemic.

"We have had multiple shootings literally in front of police officers. We can't balance safety against revenue or anything else, frankly. We only implemented the curfew when it became clear we had no other options," Mayor Gelber responded via email to New Times' request for comment. 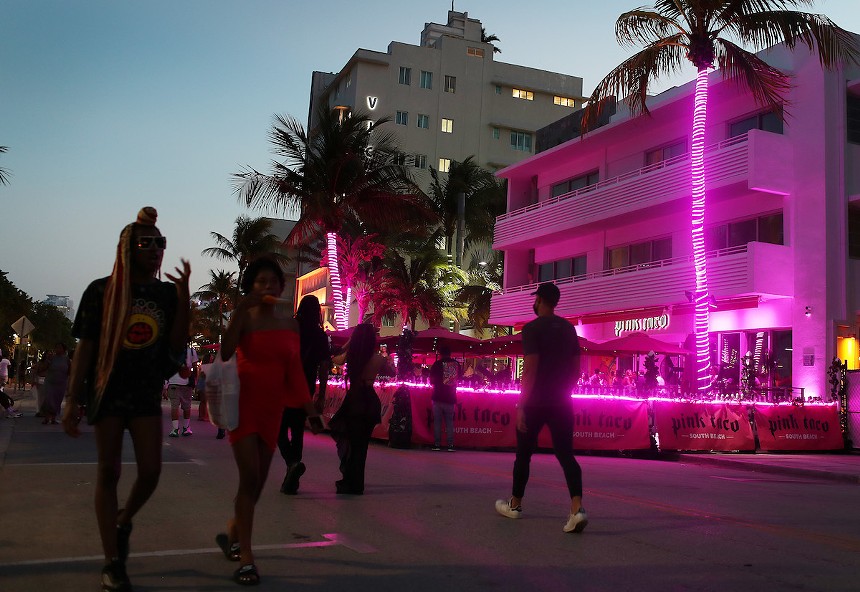 Most of the controversy surrounding spring break in Miami Beach is centered on Ocean Drive.
Photo by Joe Raedle/Getty Images
Miami Music Week (MMW) and its predecessor, the Winter Music Conference (WMC), center on the area's nightlife. On par with Miami Art Week and New Year's Eve in December, dance music's March retreat has provided a boon for local tourism since the early 1990s. In 1999, Ultra Music Festival made its debut on the sands of South Beach opposite Collins Park. (It soon moved to the mainland.) But the festivities have never attracted what you'd call a "spring break crowd;" the most common issue surrounding MMW events has always been noise.

Story nightclub, located in the South of Fifth neighborhood, has announced on its social channels that it will "temporarily close" Wednesday through Sunday "due to Miami Beach imposed curfew." The club will automatically refund ticketholders for its scheduled MMW events. Its sister venue, LIV, which is located outside of South Beach at the Fontainebleau, will operate as planned.

Treehouse, located at the northern edge of South Beach on 23rd Street, has continued to promote its events this week on Instagram, but its followers appear nervous about the possibility that the venue will cancel shows, judging from their comments about the curfew. The club has yet to respond publicly. An email to a Treehouse representative sent by New Times went unresponded.

Nazari says she has spoken to Do Not Sit's manager about rescheduling their events earlier in the day or finding a venue across the causeway in Miami that could host the parties. So far, nothing has been decided.

MMW pool parties at South Beach hotels have been spared, owing to the fact that they're scheduled to end well before curfew. Additionally, the curfew contains an exception for hotels, "provided they are servicing hotel guests only."

"Curfews are a huge government overreach," says state Rep. Michael Grieco. "It's obviously devastating more businesses than you can count — and the businesses that are not the contributors [to the problem]."

Grieco, who served on the Miami Beach City Commission from 2013 until 2017, believes a state-of-emergency declaration should be reserved for natural disasters like hurricanes.

Mark Samuelian, who replaced Grieco on the commission dais, begs to differ.

"While I understand that some business owners may be frustrated over our unanimous commission decision, I will always place public safety ahead of profits," Samuelian tells New Times via email. Further, Samuelian contends that the current emergency order underscores the city's efforts to enact a 2 a.m. last call. "If we enact the proposed citywide 2 a.m. alcohol rollback, I hope we will help avoid future similar circumstances."

Nazari, who opened Do Not Sit on the Furniture with her husband, the in-demand house DJ Behrouz, has no intention of going down without a fight.

"We need to fight for our rights and fight for business owners' rights to come," she says. "We pay taxes. We have employees with families that have now, especially with the rising costs in Miami and Miami Beach, depend on this on this week and in all other weeks of the year."

Would she consider taking her business to the mainland?

"I have people tell me, 'We have a location for you guys in Miami,' but I'm not going to give up here," she insists. "I'm going to keep on fighting for our rights. It's almost, like, systematic. They're really trying everything they can to shut us down."

Additional reporting by news editor Jess Swanson.
KEEP MIAMI NEW TIMES FREE... Since we started Miami New Times, it has been defined as the free, independent voice of Miami, and we'd like to keep it that way. With local media under siege, it's more important than ever for us to rally support behind funding our local journalism. You can help by participating in our "I Support" program, allowing us to keep offering readers access to our incisive coverage of local news, food and culture with no paywalls.
Make a one-time donation today for as little as $1.