A Guide to Kendall: Where to Eat, Drink, and Skate in Southwest Dade

Make Bonjour French Bakery & Cafe your morning spot for coffee. Liz Toruño
Out west, beyond the rising waters of Miami Beach, the condo towers of Brickell, and the green canopies of Coral Gables, lies an ever-changing suburban dreamland.

At a glance, Kendall appears to offer only the typical suburban pastimes: strip malls, restaurant chains, and cineplexes. But look past the traffic and gated communities and you'll find a culture of family-owned businesses, local bands, and public parks ready to be explored. If you grew up in Kendall, you might be familiar with the area's quirks and go-to spots, but new bars and restaurants are always popping up, and many are worth the drive out west.

Here's your guide to the thriving dining and entertainment scenes in Kendall. 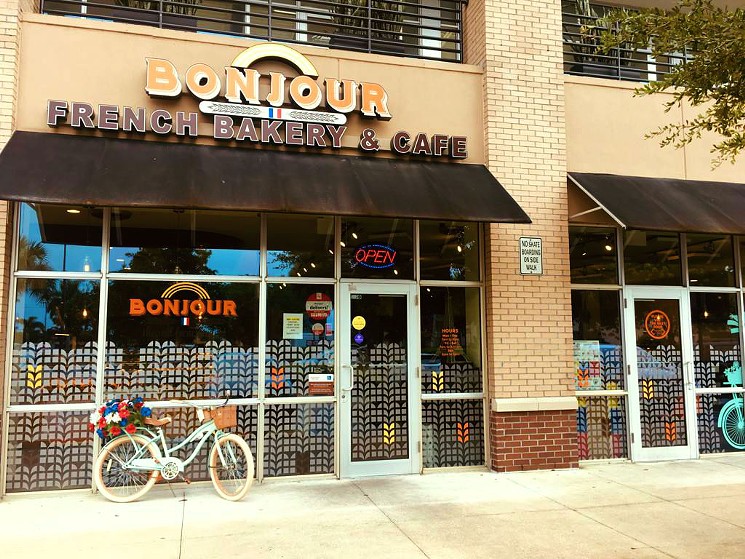 For Coffee and Pastries

Kendallites are no strangers to morning cafecito, and West Kendall offers a Francophile's option at Bonjour French Bakery & Cafe. Since debuting in 2016, the bistro has been a rare treat at the west end of Kendall Drive near Krome Avenue. Monday through Saturday, Bonjour opens at 7 a.m., giving locals a go-to spot for a morning boost as well as pastries such as éclairs, crème brûlée, cakes, and fruit tarts.

If you're craving a traditional café cubano and tostada at any hour, Pasapoga on Sunset Drive is open 24 hours. Stop by the café's ventanita any time of day for your coffee fix. For a Hearty Lunch

Many Kendall gems are hidden in unsuspecting shopping plazas. Milly's Empanada Factory, located near the Miccosukee Golf & Country Club, is one of them. The eatery has embraced the area's creative scene by hosting the West Kendall Zine Fest, an event that unites vendors, artists, and music. On a regular day, Milly's serves a simple yet delicious array of craft Venezuelan empanadas and arepas.

For vegans, MyRoots Juice Bar & Kitchen offers fully vegan food at affordable prices. Most of the items cost no more than $10, and the açaí bowls and superfood smoothies are the ultimate refreshers on a hot summer day. 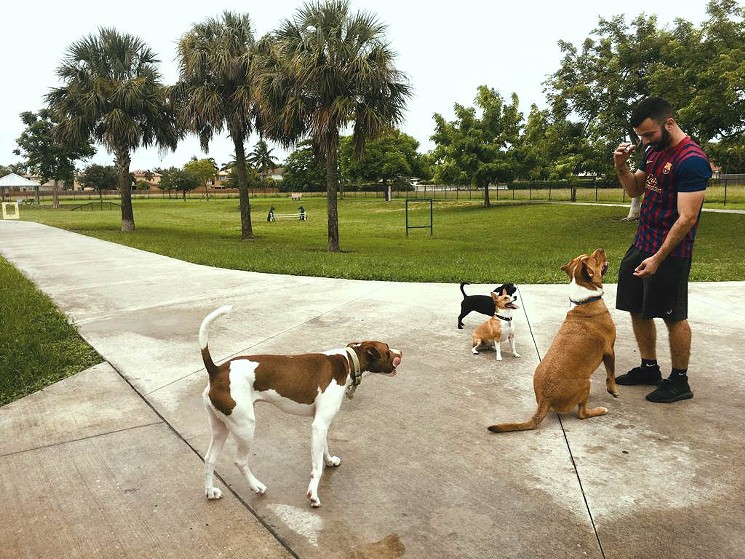 For a Day Out

Sometimes you just need to get out of the house and let cute puppers melt away your troubles. West Kendall District Park near Hammocks is a 6.5-acre dog park split into two fenced areas for large and small dogs to roam and play. Invite all of your friends and their doggos out for a play date, or spend the day training your pup on the park equipment.

Sundays from 10 a.m. to 3 p.m., the Kendall Village Farmers Market pops up behind the Bahama Breeze in the Kendall Village Center. Although a farmers' market on concrete midday can get steamy and sweaty, it's the perfect place to shop for organic veggies and locally made goods.

If you're looking to keep cool, Kendall, unfortunately, is too far from the beach — any beach. So the neighborhood's creative answers to recreation are Kendall Ice Arena and Super Wheels. If you grew up in Kendall, your parents probably took you to both spots when you were young, and, eventually, they became hangouts for you and your friends. Skate away the day and relive your childhood at those landmarks.


For a Getaway Dinner

Over the past few years, Tacos & Tattoos has expanded twice due to popularity, and even the new and larger location has long wait times on weekends. But those tacos are worth the wait. The family-owned restaurant serves food with a twist on "abuela's traditional recipes" and offers an array of local craft beers to pair with it.

Two Brothers Pizzeria is known for delicious traditional Italian pasta and pizza, as well as dedication to good customer service for more than 15 years at the same location. The restaurant is nestled in a corner of Kendale Lakes Plaza, across from Dandy Bear. If the checkered tablecloths and brick walls don't transport you to Italy, the dishes and wine will. For an extra treat, hit up the pizzeria's Free Wine Thursdays from 5 to 10 p,m.

For a Good Beer

The craft beer trend has reached Kendall. Spanish Marie Brewery, a diamond in a row of warehouses and shops, has been releasing unique brews since it opened more than a year ago. Some examples are a watermelon gose, a blueberry pancake sour, a s'mores stout, and a collaboration with Knaus Berry Farm to create a stout made with the farm's famous cinnamon rolls. Spanish Marie also hosts live music acts throughout the week and on the weekend. The brewery will soon announce its first-anniversary block party, offering the perfect reason to check out the spot if you haven't already.

Find West Dade Craft Beers inside two Chevron gas stations in West Kendall. Both locations are on Kendall Drive — one on 157th Avenue and the other on 107th Avenue. Though most locals flock to Total Wine for quick beer and wine runs, these two gas stations are the area's best-kept secrets. Follow them on Instagram for updates on new releases.

If you're looking to wind down with pizza and craft beer, look no further than the new Strange Beast Brewpub, co-owned by John Falco of Lincoln's Beard Brewing. Previously home to a Kwik Stop on the corner of Sunset Drive and 152nd Avenue, Strange Beast (named for the Japanese movie genre kaiju) is expanding craft brew options in Southwest Miami-Dade.


For a Late-Night Hang

Kendall doesn't like to stay up late. Most places close by 10 p.m., but a few spots run till the early morning. Arcade Odyssey is open till 2 a.m. on weekends, so it's the ideal place to hang without having to head east. The spot offers rows of retro arcade games and a bar serving craft beer, bubble tea, mochi ice cream, and noodles.

If the bright lights of retro games aren't your thing, Sharp Shooters Billiards offers a more laid-back vibe. This pool hall, located above a T.J. Maxx, reeks of cheap beer and cigarettes and has been an unfussy getaway for locals for more than 25 years.
KEEP MIAMI NEW TIMES FREE... Since we started Miami New Times, it has been defined as the free, independent voice of Miami, and we'd like to keep it that way. With local media under siege, it's more important than ever for us to rally support behind funding our local journalism. You can help by participating in our "I Support" program, allowing us to keep offering readers access to our incisive coverage of local news, food and culture with no paywalls.
Make a one-time donation today for as little as $1.