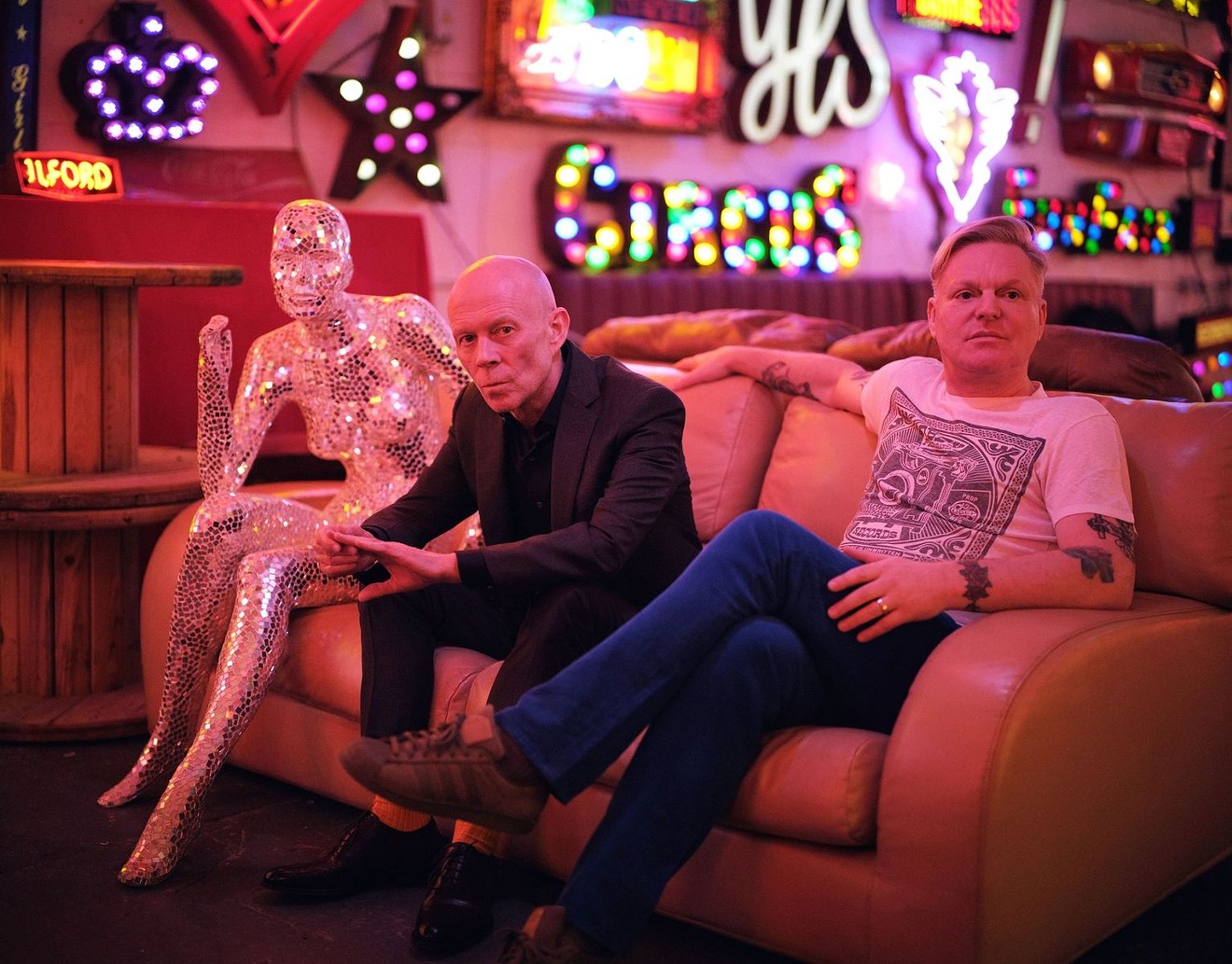 Vince Clarke (left) and Andy Bell of Erasure Photo by Phil Sharp
Whether you know it or not, you are familiar with Erasure's work. The British synthpop duo has a knack for catchy tunes that are equal parts melancholic and optimistic. Cuts like "A Little Respect" (1988) and "Always" (1994) went on to chart high on the Billboard Hot 100.

Comprising keyboardist Vince Clarke and vocalist Andy Bell, Erasure has been making music since 1985, after Clark put an ad in Melody Maker, the now-defunct British music publication, seeking a singer.

Clarke, who grew up playing violin and piano, ditched them for synths after falling in love with the trailblazing sound of Orchestral Manoeuvres in the Dark. He then started playing on his local music scene, eventually becoming a founding member of two iconic '80s hitmakers: Depeche Mode and Yaz.

Bell, a young and energetic singer who grew up loving Blondie and Phil Spector's magic string of girl groups, was a huge fan of Clarke's and was excited at the chance to work with one of his heroes.

Thirty-five years later, Erasure is gearing up for the strangest album cycle of its career.

The Neon, out on August 21, is the duo's 18th studio album. Unsurprisingly, its release was delayed owing to the pandemic, as were Erasure's plans for an accompanying tour.

The album's luminous title is meant to encapsulate the bright sound Erasure still carries through its music. For the album's production, Clarke was drawn to some of the synths he used during the band's early years.

"There's a warmth to them," he stated in the album's official announcement. "There's also a real beauty in putting different analog synthesizers together too. They give this lovely sheen."

Bell says The Neon was an opportunity to recharge his love for pop across the decades.

Speaking to New Times from his London home, where he's riding out the pandemic, Bell admits that while the album was mostly wrapped up before March, the band made several last-minute changes.

"We'd just about finished everything as COVID struck over here in the U.K.," the singer explains. "Right then, we were in listening mode, choosing our favorite mixes and doing photos. We got the timing down purely by chance."
Despite the pandemic, Bell says, he's glad the band has been active this year and keeping him busy. He and Clarke, who stay in touch virtually, are currently working on a live set.

"I've always been a crowd person," Bell says. "I'm one of six children, and I've just always lived with groups of people. It's my first time being on my own. It's very interesting, in that it's not that interesting."

"My voice is quite androgynous, and I've always tried to make it that way too when I sing," he says. "I don't know exactly why, but I just prefer the female voice."

Like Erasure's previous work, The Neon had Clarke creating the soundscapes, leaving the lyrical work to Bell. Continuing to find inspiration in '80s synthpop, Bell drew from songs like the Eurythmics' "Love Is a Stranger."

"There's just so much from that time where it doesn't even sound like they're trying because of how natural it comes out," he explains. "It's like David Bowie, where it's so cool but not trying to be anything and almost detached from everything else. So, in a way, you're almost more intrigued."

Lyrically, Bell was inspired by his love for his family, friends, and his partner.

"It's that fortuitousness and having been loved by my nan and coming from a loving family and having had great lovers in my life. I just feel so grateful," he says.

He expresses an equal measure of gratitude for the love he and Erasure have received from the LGBTQ+ community. Openly gay during the height of the band's success, Bell wore tutus on stage and defied gender norms at a time when queer representation was still an anomaly.

"That was the correct way of doing it for me back then," Bell says. 'These days, queens of a certain age know who we are, but I don't expect younger people to know me. I'm like a silver daddy, and my beard's all gray."

Though he plans on staying in London for the foreseeable future, Bell says he's eager to get back to Miami, which has been his second home for many years now.

The band had also planned for some shows in the Magic City this year, before the pandemic struck.

"I'm really happy and really surprised by how our audience has grown there," says Bell, who adds that he always felt he was fated to live in South Florida. "Miami just seems to have grown organically with me as a person. It's one of those places where people love it, or they hate it. You have to be sort of quite forgiving of the city, because it can be harsh, especially back then. You have to almost not even embrace it, just allow yourself to be embraced by it."
KEEP MIAMI NEW TIMES FREE... Since we started Miami New Times, it has been defined as the free, independent voice of Miami, and we'd like to keep it that way. With local media under siege, it's more important than ever for us to rally support behind funding our local journalism. You can help by participating in our "I Support" program, allowing us to keep offering readers access to our incisive coverage of local news, food and culture with no paywalls.
Make a one-time donation today for as little as $1.