The beloved NYC band performed in South Florida for the first time since its two-night stand at the Fillmore over half a decade ago, this time in support of new record Father of the Bride. The group brought with them a new mentality and freewheeling spirit that has taken hold since the departure of founding member Rostam Batmanglij in 2016, and proved to be all the better for it.

Following Mississippi’s Christone “Kingfish” Ingram's blistering opening set of blues guitar heroics, Vampire Weekend took the stage as a newly expanded seven-piece band, opening with Father of the Bride lead single “Harmony Hall.” The broader lineup filled out the band’s sound with increased nuance in lush songs and a newfound bombastic bent that transformed the set into the most cathartic rock show of the summer.

Along with the band's lineup, its songs — both new and old — were expanded as well. Slower tracks like “Big Blue” came to life in the live setting, providing opportunities for new touring musicians to showcase their talents. These expanded renditions of songs, specifically the aforementioned “Big Blue,” along with “Sunflower,” were bigger, fuller, and altogether more epic from the stage than on record. 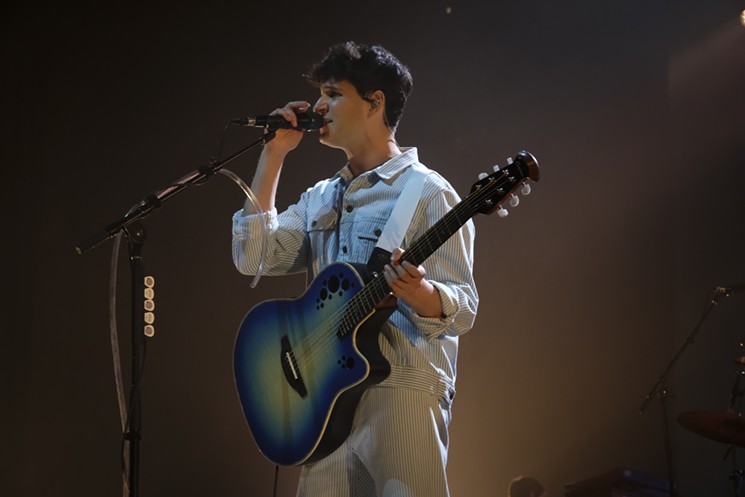 See more photos from Vampire Weekend's performance in Miami here.
Photo by FujifilmGirl
The show started right at 8:45 p.m. and continued through 11 p.m. The marathon set was par for the course for the new version of Vampire Weekend, which favors longer sets and an added layer of improvisation that was nonexistent in previous tours.

The three remaining original members of the NYC-based group were all in top form for the band’s first Miami show since 2014. Frontman Ezra Koenig’s vocals were immaculate throughout the show and didn’t seem to wear down as the lengthy set continued well into its second hour. Bassist Chris Baio’s dance moves remained unfailingly entertaining, and Chris Tomson’s blend of afrobeat and pop drumming was as dialed in as ever, further augmented by the addition of a second percussionist.

The new hero of the band, however, and the clear standout among the fresh crop of touring musicians, is undoubtedly guitarist Brian Robert Jones. Jones brought an urgency and frenzied passion to the lead guitarist role that completely changed the band’s sound for the better. During the extended jam that closed an extra-long version of Father single “Sunflower,” Jones took complete command of the crowd, morphing seamlessly from melodic pop to fuzz-drenched stoner rock.

During songs like “Sunflower” and “White Sky,” among many others, the intricate guitar and bass arrangements were performed in perfect harmony, so irrevocably tight that it was hard to believe the musicians didn’t have synced metronomes clicking in their ears. 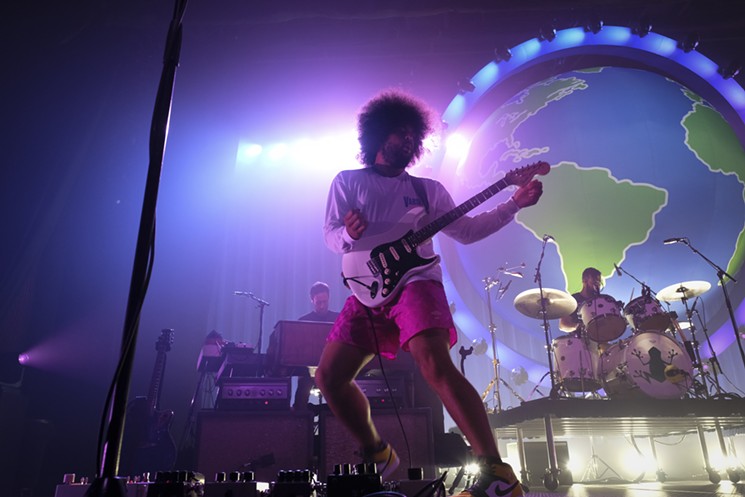 Brian Robert Jones of Vampire Weekend. See more photos from Vampire Weekend's performance in Miami here.
Photo by FujifilmGirl
The prevailing sense of whimsy that has defined this era of Vampire Weekend was on full display throughout the marathon set, with the group taking requests directly from fans wearing bucket hats, as has been customary throughout this tour. In the case of the Miami date, these requests constituted “Bryn” (good call) and “Ottoman” (a solid deep cut, but a missed opportunity).

The band has also incorporated cover songs into its sets as of late, and the selection that Miami received was inspired by Koenig's humorous obsession with a rather ridiculous font.

“This is one of our favorite songs to cover. It’s not only a beautiful song, [but] it also inspired one of the most whimsical fonts of all time," Koenig told the crowd as he introduced the band's rendition of Bob Dylan's "Jokerman," which closed the main set.

Koenig is a truly singular frontman. He exudes confidence and cool while embracing his eccentricities in a way that endears him to fans even more than his music does. He ran the gamut of those quirky fixations during the show with "Jokerman," Toblerone, absurd T-shirts, and bucket hats — all inside jokes from his interaction with fans, each receiving recognition throughout the night. 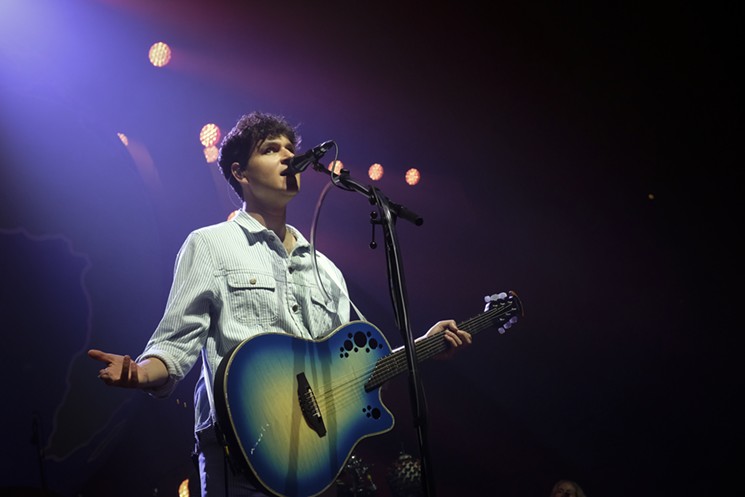 See more photos from Vampire Weekend's performance in Miami here.
Photo by FujifilmGirl
“You’ve got some hardcore fans in Miami. I see some rare T-shirts upfront... really rare,” Koenig told the crowd as the show was winding down, adding "Miami's always been good to us."

It’s a testament to the quality of the show that after more than two hours and 28 songs, there were still tracks that were sorely missed by fans. “Walcott,” “One (Blake’s Got a New Face),” and new highlight “Sympathy” were all name-checked by fans as lacking on the way out of the venue.

In all, the show made for a perfect Saturday night and cemented Vampire Weekend as one of the most distinct and capable American rock bands currently active. With another solid album under to its name and a newfound ambition in the live setting, Vampire Weekend has been reborn stronger than ever.

- "White Sky"
- "Bryn" (fan request)
- "Ottoman" (fan request)
- "Worship You"
- "Ya Hey"
KEEP MIAMI NEW TIMES FREE... Since we started Miami New Times, it has been defined as the free, independent voice of Miami, and we'd like to keep it that way. With local media under siege, it's more important than ever for us to rally support behind funding our local journalism. You can help by participating in our "I Support" program, allowing us to keep offering readers access to our incisive coverage of local news, food and culture with no paywalls.
Make a one-time donation today for as little as $1.