Best of Miami 2019: The Best Bands and Musicians 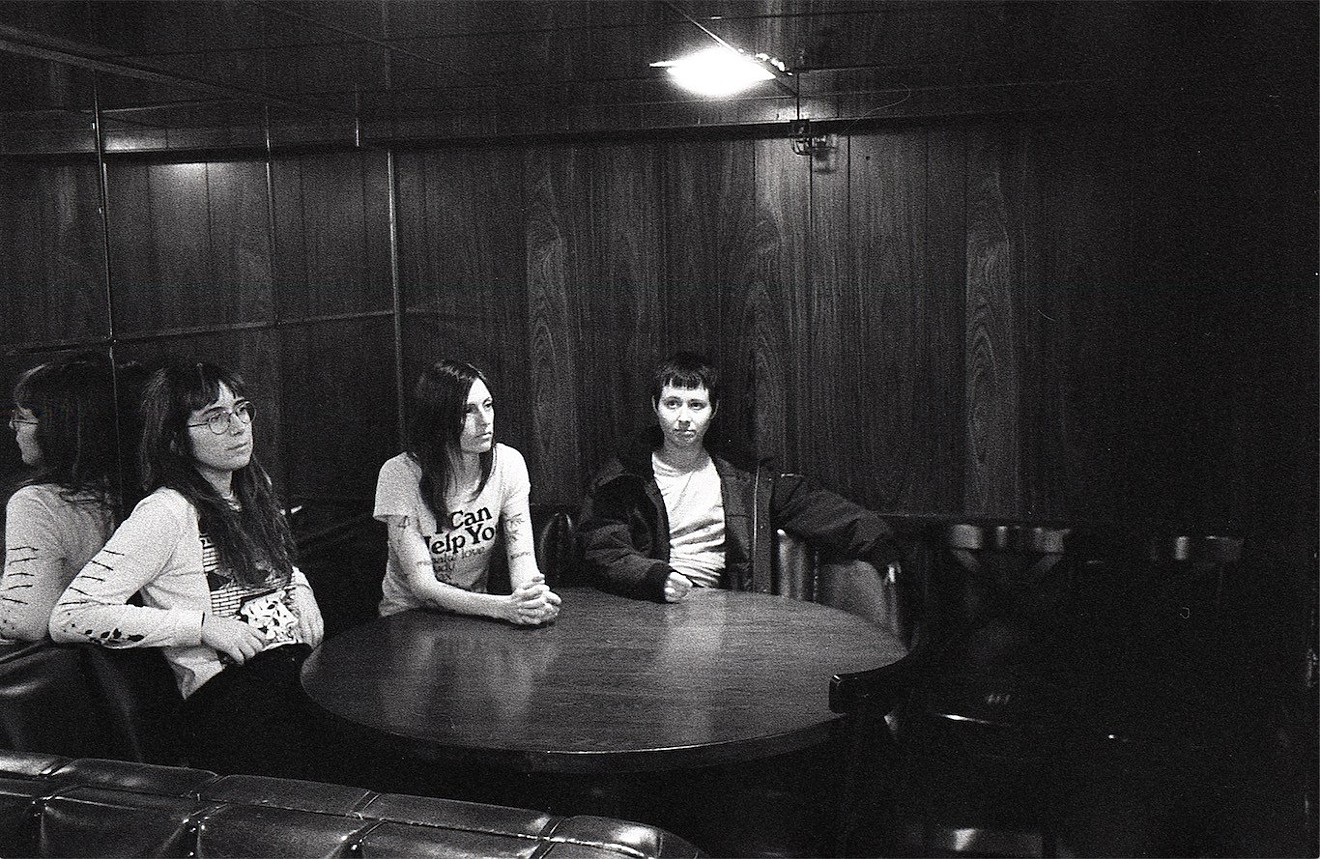 Las Nubes, New Times' Best of Miami 2019 winner for best band. Photo by Gabriel Gavidia
New Times' annual Best of Miami issue will be released online tomorrow morning, with hundreds of staff picks of the finest people, places, and culture that ruled South Florida in the past year. Can't wait? Here's a sneak peek at a few of the winners who have helped define Miami music.

Best Band: Las Nubes. On a cloud in the depths of the 305 live the lo-fi garage pop goddesses better known as Las Nubes (formerly Smvt). Ale Campos’ solo project evolved into a trio and now features Emile Milgrim and Nina Carolina delivering raw and grungy dream fuzz with ’90s sensibilities. “Songs meant to be listened to on headphones while lying prostrate on the floor” is how the emerging band instructs fans to listen to its The First Three EP’s + Emotional Debris on Las Nubes’ Bandcamp page. The group’s catchy Spanish single “QSW,” from its upcoming first full-length album, SMVT — out this year on Sweat Records Records — recently landed the bandmates on NPR’s alt.Latino, BrooklynVegan, and Remezcla. File under “cloud core.”

Haute Tension
Photo by Jayme Gershen
Best Local Album: Haute Tension by Haute Tension. Haute Tension used to rock Miami crowds as Mo’Booty, but its new name offers better descriptors of the trio’s sound. The band — one of the most active in Miami’s rock scene — offers equal parts surf-rock, psychedelic, and tropical rhythms on its self-titled, full-length debut. The album cover pays homage to the band’s home base, with two gators seemingly kissing or eating each other’s faces in the sunlight — it’s all very “Florida Man.” The album begins with the band’s 50-second, self-titled theme song, which opens with a riotous drum fill that could be confused for a spray of bullets. From there, the band slows things down for the jazzy, trumpet-laden “Dano” and the psychedelic-blues haze of “Daily” and then perks back up to toy with tropicalia on “What Would You Say.” In the end, Haute Tension accomplishes an often attempted but seldom achieved feat: bottling the kinetic energy of its live shows and putting it on wax for posterity. 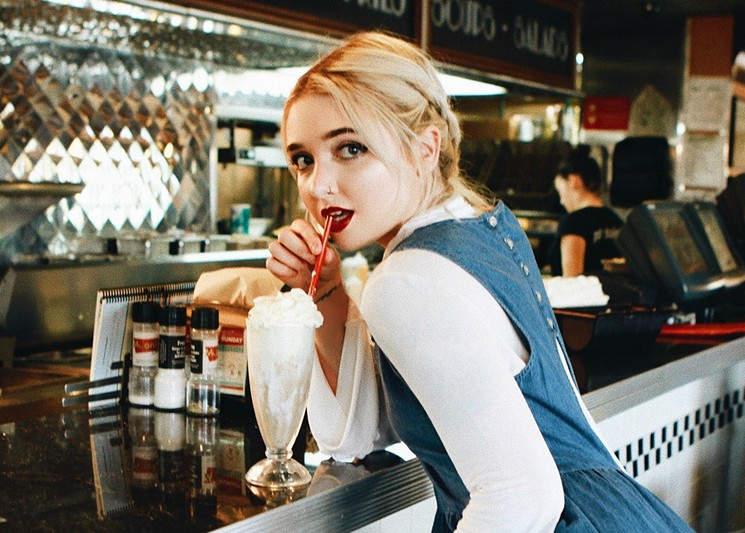 Baybe
Courtesy of Baybe
Best Pop Act: Baybe. Abbey Loren’s vocals glide effortlessly on her single “Winter Air.” “Can you hear what they say?/About me and you, babe/They’re wondering if you will fall/For me like they did back in the day/Baby, it’s your call.” On the song, the Fort Lauderdale singer known as Baybe — formerly Love, Abbey — channels equal parts Lana Del Rey and Gwen Stefani. But fast-forward to her latest cut, “IKYMM,” and she’s more like Ariana Grande. That is to say, Loren, who is in the early stages of her career, is still experimenting with her sound, but her vocal chops are unquestionable. And if South Florida already birthed one pop-vocal powerhouse, who’s to say it can’t do it again? The odds are definitely in Loren’s favor. She grew up around music thanks to her parents, who own 42nd Street Recording Studios in Oakland Park, where her father is a sound engineer. “[My dad] was always very harsh on me with pitch and tone and really trained me to be a well-rounded musician,” Loren told New Times in 2018. Well, it seems like that tough love paid off.

Megan Morrison
Photo by Ptah Quammie
Best Solo Musician: Megan Morrison. Singer-songwriter Megan Morrison has played in her fair share of local bands, including Dorothy’s Surrender and Revolver, but in 2019, she stepped out into a new genre all on her own. The first hint she was headed in a new direction came in March, when Morrison released “Warrior Woman,” a collaboration with beatmaker Miichii. Just a few days later came her solo track “9 Lives,” on which the operatic vocalist keeps her vocals midrange to sing about overcoming dark periods in her life. “Now that I’m living peacefully/No one can take that away from me,” Morrison sings as her voice floats stoically above the beat. She could be singing about the past substance abuse she’s been open about in interviews. Or perhaps she’s singing about overcoming the fear of navigating the ups and downs of the music business as an independent artist. No matter the inspiration, Megan Morrison is crafting songs almost anyone can relate to.

MC Jumanji
Photo by Rod Deal
Best Hip-hop Act: MC Jumanji. MC Jumanji is obsessed with grime — not the stuff under your fingernails, but the British music genre where fast breakbeats are narrated by gritty rhymes. To help popularize grime on this side of the Atlantic, Jumanji cofounded the local music label American Grime. Its monthly Friday-night parties at Kill Your Idol, dubbed “Proper,” are a sure opportunity to witness Jumanji rock the mike with his distinctive, brooding pitter-patter as he guides guests through a late-night introduction to the genre. Once you’re hooked, continue your education with his 2019 single “Atlantic.” 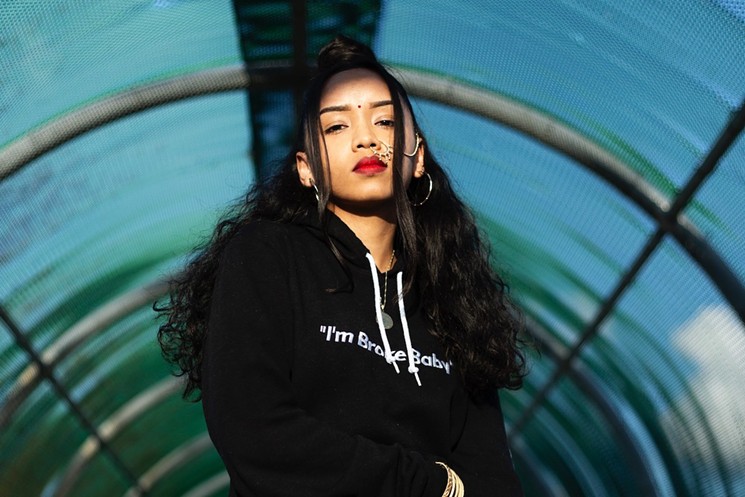 Nil Bambu
Photo by FieldOfFocus
Best R&B Artist: Nil Bambu. R&B has enjoyed a resurgence in recent years as new artists remix the basic elements of the genre — soulful lyrics, sexy rhythms, and a helping of heartbreak — with modern messaging and attitude. Nil Bambu, with slow-dance tracks that highlight the clear, whispery tones of her voice, is no exception. And on her 2019 single “Right There,” she adds some feminist revenge to the mix. Lyrically, the song is a seduction, with a chorus repeating, “I wanna kiss it right there/I wanna touch you right there, right there, right there.” But its video imagines Bambu as a spy who’s double-crossed by her partner — with deadly consequences. Watch it; then listen to the song again and hear the double meaning in lines like “Call me crazy, crazy/You know I’m crazy, crazy” and “I would never disrespect you, no/Baby, I just gotta check on you.” This is the evolution of R&B we’ve been waiting for.

James Lance
Courtesy of James Lance
Best Reggaeton Act: James Lance. With reggaeton and Latin trap reaching new heights in mainstream popularity, it’s only a matter of time before Miami produces a hitmaker to call its own within those genres. Colombiano James Lance has a good shot at being that artist. Since 2017, he’s been working hard on pushing the local Latin-trap scene to the forefront. His style is darker than the stuff by chart-toppers such as Bad Bunny and J Balvin, but his flow remains hypnotic, with hooks in the right place to make sure the songs can’t escape your head. On the lover-scorned track “Traicionera,” he emotes, “Oye, mami, hasta el día que te fuiste/No te diste cuenta del daño que me hiciste/Queriendo regresar del error que cometiste/Pero el amor a ti baby ya lo perdiste.” Lance has also cut tracks in English, such as “Bout It” and “2AM,” but he’s undeniably stronger — and more memorable — when he sings in Spanish.

Cortadito
Photo by Edwin Cardona
Best Latin Act: Cortadito. It’s named for your favorite caffeinated pick-me-up, and it might just be your favorite Latin band in Miami. As Latin artists top the charts and the world falls in love with the contemporary music coming out of Latin America, Cuban band Cortadito wants to remind listeners that the boleros and son of the 20th Century can still get you dancing in 2019. In late 2018, the band released a set of songs in those musical styles on Canciones de Julio, aptly named for Cortadito’s songwriter, Julio Cesar Rodriguez Delet. The band keeps its itinerary stacked with appearances at festivals such as GroundUp and Afro Roots Fest, as well as performances throughout South Florida. In late June, the band will open for legendary Cuban pianist Chucho Valdez as part of the Rhythm Foundation’s concert series Hollywood ArtsPark Experience.

Monterrey
Photo by Carolina Menendez
Best Electronica Act: Monterrey. Roger del Pino’s electro project, Monterrey, expanded to new heights over the past year. Its four-song EP, Elapse, continued in that laid-back chillwave tradition that will please fans of Washed Out and M83. Monterrey’s music always had that ’80s synth vibe reminiscent of a lost episode of Stranger Things, but its latest video for “Make Me Feel,” with its camcorder textures, made fans especially nostalgic for a noir New Wave Miami that probably never existed. To translate its hypnotic recordings into a live setting, Monterrey has expanded into a four-piece band with a live drummer, bassist, guitarist, and ever-present synths to take audiences on a dark, groove-filled musical journey.
KEEP MIAMI NEW TIMES FREE... Since we started Miami New Times, it has been defined as the free, independent voice of Miami, and we'd like to keep it that way. With local media under siege, it's more important than ever for us to rally support behind funding our local journalism. You can help by participating in our "I Support" program, allowing us to keep offering readers access to our incisive coverage of local news, food and culture with no paywalls.
Make a one-time donation today for as little as $1.
New Times staff and contributors