Jousting at the Florida Renaissance Festival. Courtesy of Q Imagery
A decade ago, you couldn’t swing a Medieval-inspired battle at a renaissance fair without hitting someone dressed as Xena, according to Florida Renaissance Festival show director Richard Weber. Now? The warrior princess’ moment in the sun has passed and been replaced by a much bigger cultural phenomenon: Game of Thrones.

“You’ll probably see half a dozen Jon Snows on any given day. Daenerys and that blue dress — you see a lot of them,” Weber says. “We afford guests an opportunity to play out their fantasies.”

The 27th-annual Florida Renaissance Festival runs February 9 through March 24 at Quiet Waters Park in Deerfield Beach. Guests can expect even more costumes from the Seven Kingdoms than usual on opening weekend (February 9 through 10), which just happens to be Game of Thrones weekend. The theme has been done at other renaissance fairs but, surprisingly, this will be a first for the Florida Renaissance Festival.

Game of Thrones weekend will include fight demonstrations with knights, courtesy of Medieval Times in Orlando. Weber says the staff is being prepped on GoT storylines so that they can playfully banter with costumed guests. If all goes according to plan, the festival will also have a replica Iron Throne on hand for some kick-ass photo ops. 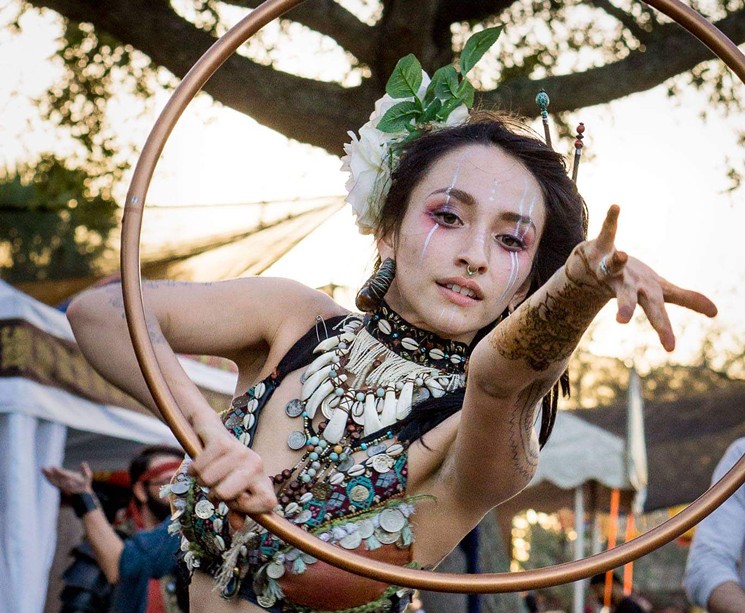 One of many performers at the Florida Renaissance Festival
Courtesy of Q Imagery
Obviously, Game of Thrones is an adult show with a reputation for gnarly death scenes and unabashed nudity. As Weber points out, the renaissance era was known for being similarly “bawdy.” But he insists the festival will remain family-friendly opening weekend and, for the most part, throughout its run. He says the festival has adapted to the times and phased out most of the violence. There’s still jousting, but the festival has exchanged the guys on horses trying to knock the shit out of each other for a more entertaining choreographed show with storylines.

The one event you should probably steer clear of if you’re with children or easily offended is the cleavage contest. This boobs-based competition takes place during wenches weekend and is the female counterpart to the festival’s men in kilts contest.

“It’s ultimately about presentation and not [size],” Webber says of the cleavage contest, adding “It’s silly and incredibly sophomoric, but that’s the level of humor people look for."

Florida Renaissance Festival. 10 a.m. to sunset Saturday, February 9, to Sunday, March 24, (weekends and President’s Day only), at Quiet Waters Park, 401 S Powerline Rd., Deerfield Beach; 954-776-1642; ren-fest.com. Tickets cost $25 for adults and $12 for children ages 6 to 11 years of age. Children 5 and younger get in free. Season passes cost $106 for adults and $59 for children.
KEEP MIAMI NEW TIMES FREE... Since we started Miami New Times, it has been defined as the free, independent voice of Miami, and we'd like to keep it that way. With local media under siege, it's more important than ever for us to rally support behind funding our local journalism. You can help by participating in our "I Support" program, allowing us to keep offering readers access to our incisive coverage of local news, food and culture with no paywalls.
Make a one-time donation today for as little as $1.