Carnival masqueraders will be clad in vibrant, bejeweled costumes and makeup. Photo by Berment Photography
A mainstay in South Florida's Caribbean community, Miami Carnival returns this weekend from October 7-9 for its 38th-annual celebration. Revelers can expect to experience vibrant, soca-infused events elevated with a Miami twist sprawled across the three-day celebration.

"Culture is very important as a people. You have to know where you came from to get to where you're going," says Larson Phipps, Miami Carnival's director of J'ouvert. "I'm happy that we're able to present our culture in an American forum. It's all about understanding and accepting one another's culture living in a melting pot. We don't just exist in a vacuum. We exist with everybody else."

The energetic and tropical vibe running through the Jr. Carnival continues at Panorama on Friday, October 7. Also hosted at Central Broward Regional Park, the steelpan competition will feature renowned bands Elite Pan Stars, Lauderhill Steel Ensemble, Melo Groove Steel Orchestra, Metro Steel Orchestra, and New Generation Branches as they face off for the title of "Miami Carnival Steel Band of the Year." Along with international steel bands from Trinidad and Tobago, Roadblock Steel, and Newtown Playboys Steel Symphony, there will be a special guest performance from the Japanese steel band, WaiWai Steel Orchestra.

"When another country picks up your culture, you sit back and say, 'I think we've really crossed those lines," Phipps says of WaiWai Steel.

The cultural celebration continues Saturday, October 8 at J'Ouvert Mas, a street fête known as "break day," where bands and revelers cake themselves with powder while dancing to soca. Held at the Miami-Dade County Fair & Expo fairgrounds, the party isn't just for the performers. Attendees will be able to "dutty up" in the new J'ouvert Jam Zone, where they'll be given paint, powder, and a complimentary drink courtesy of sponsor Babuxca. There will also be live performances by Iwer George, Tallpree, and Skinny Banton. As for what's in store for the rest of the night, Phipps says partygoers will have to wait and see.

"Life is full of surprises, and we do have a surprise for them," he teases with a laugh. "They are going to have all the elements of J'ouvert." 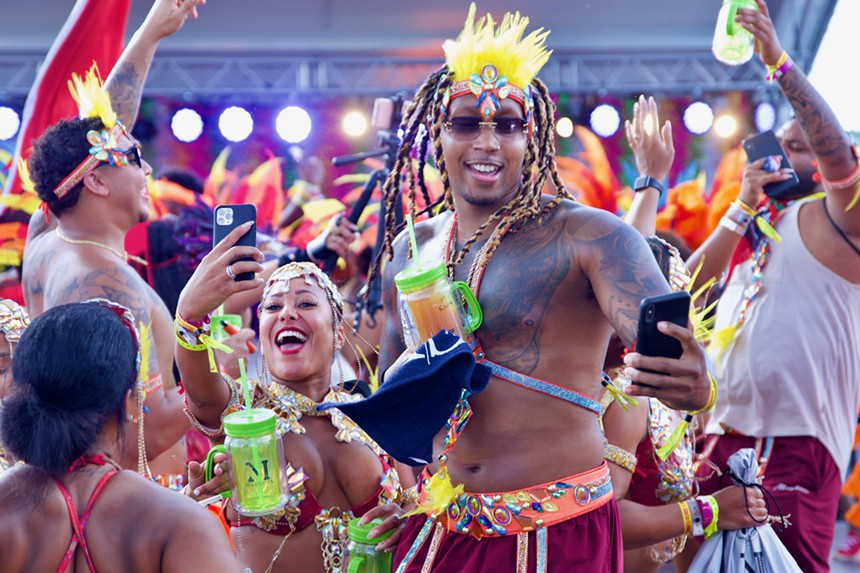 Carnival revelers can expect to dance all night to a diverse lineup of artists hailing from Trinidad, Haiti, South Africa, and more.
Photo by Berment Photography
Carnival weekend festivities culminate on Sunday, October 9 during the parade of bands. This year's parade includes more than 20 themed masquerade bands competing for the top prize and title of "Band of the Year." Masqueraders brighten up the festivities clad in feathers and bejeweled costumes. And there's no Carnival without its pulse. Sunday's concert boasts a diverse lineup, including Trinidadian artist Patrice Roberts, Iwer George, Nadia Batson, and Farmer Nappy, along with South African singer Nomcebo Zikode and Haitian artist J. Perry.

"Performing for the first time at Miami Carnival is very exciting for me, and I'm looking forward to it," says kompa artist J. Perry. "Most of my music and most of my big hits are in Creole, but I know music has no barriers. I've gone to other places speaking Creole and singing Creole, so I hope to show other Haitians that it's possible and the doors are there, and they're opening now."

Perry also represented Haiti with his cousin, DJ/producer Michael Brun, at Notting Hill Carnival in London in August. His performance at Sunday's concert is part of the effort by Miami Carnival's organizers to feature representation from islands all over the Caribbean and reflect South Florida's diversity.

Perry says the crowd can expect to jump to an energetic set and a special performance of his latest single, "Liki Tiki," featuring the Trinidadian soca band Kes and Michael Brun.

"I like to have fun on stage and feed off the crowd," he says. "They're going to hear new music, and it will be their first time seeing me perform live."

Across the three events this weekend, Carnival newbies and enthusiasts can expect to celebrate and immerse themselves in the rich traditions and history of Caribbean culture, music, and food.

"Come out to the events and enjoy the song, enjoy the music, and, most of all, enjoy the food," Phipps says. "On Carnival Sunday, people will see Carnival in all its splendor and what takes all year to make. It'll be fantastic."

Miami Carnival 2022 Concert & Parade. 11 a.m. to 11 p.m. Sunday, October 9, at Miami-Dade County Fair & Expo Center, 10901 SW 24th St., Miami. Tickets range from $40 to $2,500 via caribtix.com.
KEEP MIAMI NEW TIMES FREE... Since we started Miami New Times, it has been defined as the free, independent voice of Miami, and we'd like to keep it that way. With local media under siege, it's more important than ever for us to rally support behind funding our local journalism. You can help by participating in our "I Support" program, allowing us to keep offering readers access to our incisive coverage of local news, food and culture with no paywalls.
Make a one-time donation today for as little as $1.