Malaika Temba's Textile Works Exhibit a Reverence for the Process

Malaika Temba's work has been on view at Miami Art Week, the 2019 Met Gala, and New York Fashion Week. Photo by Malaika Temba
In a global marketplace where every billboard promises "fast action" and "results in minutes," textile artist Malaika Temba finds herself entranced by the type of work that takes time — the kind of creation that requires careful attention, patience, and a reverence for the process itself.

“Sugarcane Is Sweetest at the Joint” is a collection of about ten of Temba's works that explore labors of both the physical and the emotional variety, as well as the impacts left by those who take on the lion’s share of labor for those around them. The exhibition runs June 26-July 31 at the Mindy Solomon Gallery in Allapattah.

“The joint of sugarcane is the hardest part to get to. The title is a saying that means hard work pays off,” Temba explains. “These works talk about labor — physical, emotional, and their intersection — as well as ways that these types of labor are feminized and disrespected because they’re feminized. That’s where the sweetness comes in. The pieces in this show are honoring my grandmothers, both of whom passed away recently. These works honor how grounded and practical they were and how much labor they put in for their families. There is a respect for labor in this show, especially traditional women’s work.”

With roots in both Washington, D.C., and Kishimundu, Tanzania, and a nomadic youth that had her living in different countries, Temba has acquired a critical lens through which to observe global, human-level issues like racism and sexism. She calls her work both a celebration and a cautionary tale for viewers: Don’t become complacent.


“By being in so many different places, I have learned a lot of lessons, like how I’m going to be treated as a Black woman depending on where I am,” says Temba, who's currently based in Harlem. “When I was a kid, I lived in South Africa and learned about the apartheid regime. At that time, I didn’t know anything about slavery’s legacy in America. When I moved to the U.S. later, I still didn’t learn about it in school. It was so striking, so clear what was missing. That kind of global experience has made me feel like I have a lot to say about what can be better for us. I have more of an understanding that there are major things to be critical of.”

For the works in “Sugarcane,” Temba applies that critical lens to labor, contrasting the automated manufacturing processes favored in the U.S. to the much more human, physically taxing kinds labor performed by workers around the globe. One piece, Elezyia Mshimbika, takes its title from Chaga, a language spoken by the peoples of northern Tanzania, and translates to “For the Ancestors.” Temba sees this 12-foot-wide knitwork as an offering to the women in her family who've physically labored to provide their kin with nourishing meals their entire lives. 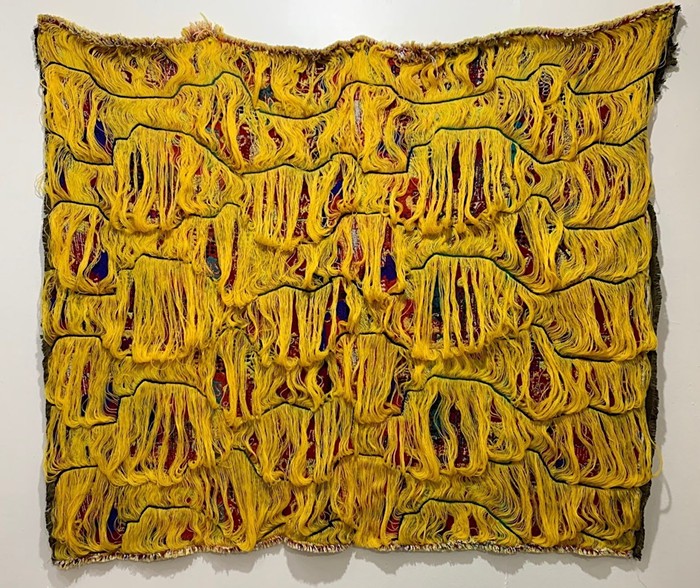 Ntozake's Lady in Yellow, 2020
Photo by Alex Nuñez
“It’s a representation of a pile of burlap bags stacked up with green and yellow bananas, like what you’d see in the back of a truck carrying produce across the country. A lot of farming is done by women, and a lot of the cooking and feeding of families is done by women, too," she explains. "In this artwork, this huge pile of everyday objects is made larger than life. So much process went into making this part of the work, they’re almost regal. The Chaga people have a spot in their gardens where they essentially pour one out for their ancestors. This work is my version of an offering to my grandmothers.”

Temba is this year’s winner of the National YoungArts Foundation’s Jorge M. Pérez Award, an unrestricted gift of $25,000 given to emerging and midcareer artists who previously received the YoungArts Award, which Temba won in 2014. A 2018 graduate of the Rhode Island School of Design (RISD), Temba was initially drawn to textile art by observing her mother, who knit fabrics from countries and cultures the world over. At RISD, Temba learned of the power of storytelling that's contained within the textile medium.

For Temba, patterned or single images, text, and fabrics layered and stitched together mimic the gray areas that exist within what we know as truth. These gray areas take the form of bold, bright colors and patterns and large-scale works that demand attention.

“A lot of times, pieces start for me as stream-of-consciousness writing. Then I start to work with the words that are there. Sometimes I’ll print out and cut up all the words and throw them together. Sometimes I’ll cover things up," she says. "There’s a lot of process-based manipulation of the text to get across that these ideas are in a gray area. The rest of the work still says, ‘Pay attention to this.’ The fragmentation makes it clear that these ideas are complex, and there are no answers that don’t include multiple perspectives.”

Textile works like those in “Sugarcane” serve as a platform for Temba’s unique perspective and experience to shine in ways other modes of communication simply cannot achieve.

“When I’m writing to myself, ideas come to me easily. The second I try to communicate that to others, I just can’t. I get nervous about organizing my thoughts," she admits. "When I’m making a piece, I feel like I’m communicating most clearly. I also just spend a lot of time thinking — overthinking — and I’m very emotional as a person. I want that to not be thought of as a negative thing. Being thoughtful isn’t a rewarded trait these days, but it should be.”

Temba says she hopes visitors to “Sugarcane Is Sweetest at the Joint” take a thoughtful approach to viewing the works, recognizing the value in labor; the importance of considering history, multiculturalism, and multiplicities when forming ideas; and most important, the potential within each of us to tackle the labyrinthine issues facing humanity as a whole.

“Malaika Temba: Sugarcane Is Sweetest at the Joint.” Saturday, June 26 through July 31, at the Mindy Solomon Gallery, 848 NW 22nd St., Miami; 786-953-6917; mindysolomon.com. Admission is free.
KEEP MIAMI NEW TIMES FREE... Since we started Miami New Times, it has been defined as the free, independent voice of Miami, and we'd like to keep it that way. With local media under siege, it's more important than ever for us to rally support behind funding our local journalism. You can help by participating in our "I Support" program, allowing us to keep offering readers access to our incisive coverage of local news, food and culture with no paywalls.
Make a one-time donation today for as little as $1.