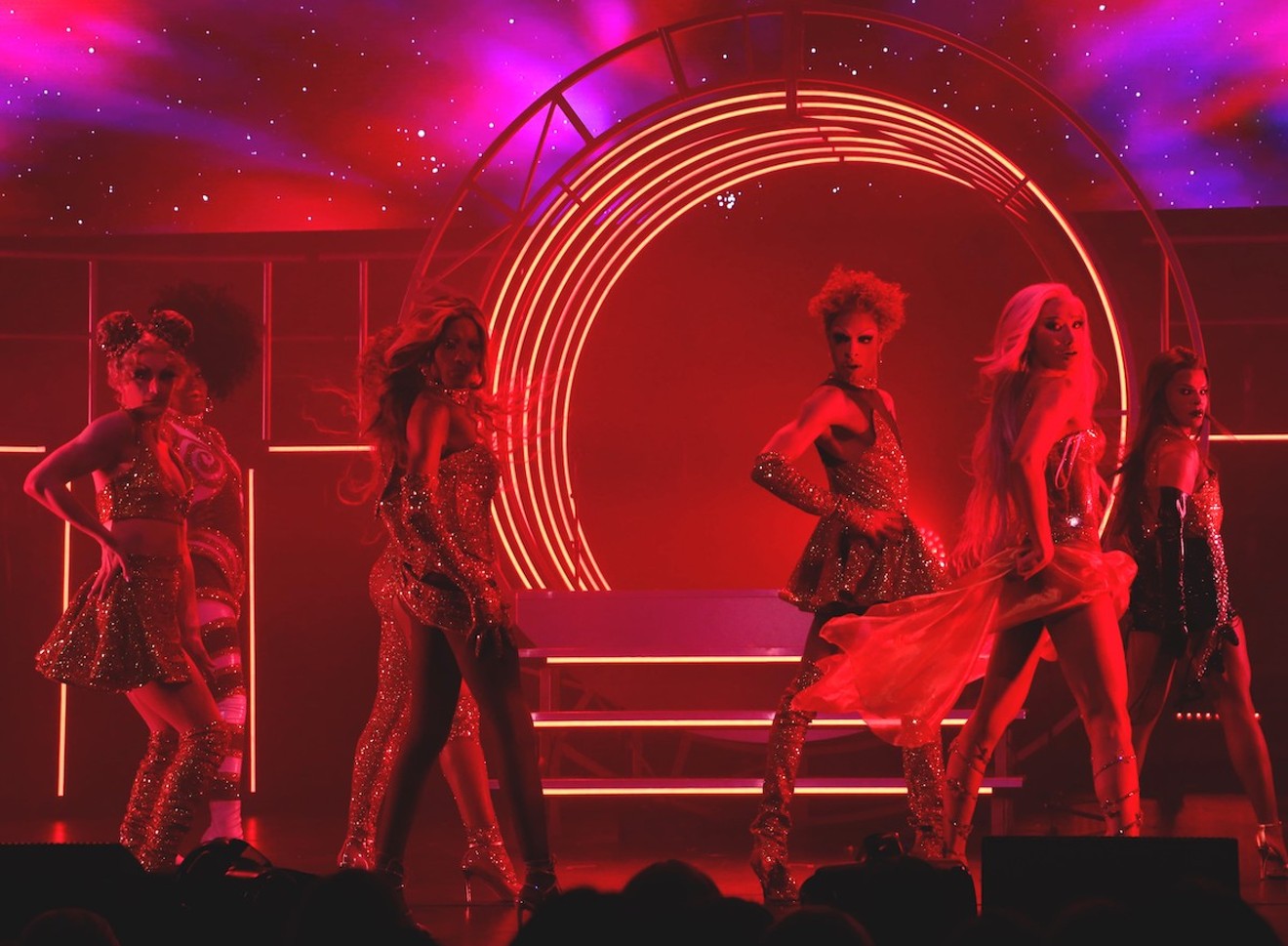 The RuPaul’s Drag Race queens are ready to serve more sickening performances. Photo by Marco Ovando
Start your engines! The queens of RuPaul's Drag Race kick off their live tour in South Florida on Friday, July 8, and if you're not seeing the queens at Werq the World, you're only getting half the story.

The live production, organized by Voss Events, Drag Race's official events agency, has hosted some of the TV series' most successful queens, visiting over 28 countries since its start in 2017.

After two years of virtual and drive-in Drive 'N Drag productions, the drag phenomenons will return to theaters starting in Fort Lauderdale at the Broward Center for the Performing Arts — this time with jaw-dropping gags, surprises, and an interactive spin on live entertainment.

Drag Race star Kameron Michaels assures New Times that whether performing in a bar, behind a screen, in a parking lot, or in theaters, the cast will leave you gagging for more.

"You are going to get a show out of me whether I'm in some small bar in West Virginia or I'm in Wembly Arena in London in front of one thousand people," Michaels says. "We were performing for windshields, so I'm just excited to interact with people again."

Michaels — a top-four finalist of Drag Race's tenth season and star of RuPaul's Drag Race Live! Las Vegas residency — will join this year's star-studded cast, which features 14 queens from the most recent season (14) as far back as Season 10, for the tour's largest lineup yet.

Kameron Michaels is ready to see her fans in person once again.
Photo by Marco Ovando
No stranger to live tours, Michaels has no doubt the new queens will serve looks, stunts, and performances even more captivating outside of the reality show competition.

"I'm really excited to meet the new girls because I've been through the wringer for about four or five years," Michaels says. "I kind of get a little joy out of seeing the new girls go for it, you know. It's bus, planes, another plane — like very the Lady Gaga thing."

Voss Events senior producer Jon Norris recalls a recent conversation between Vanessa Vanjie Mateo, who performed alongside Michaels in Vegas, and Jorgeous, who at 22 is one of the show's youngest contestants and touring for the first time with Werq the World.

"Vanjie was telling Jorgeous how she had that same moment when she first joined Werq the World. So being her first show, I think it's going to be pretty incredible to see all those feelings bottled up and finally released on stage," Norris explains. "It'll be an exhilarating moment."

If you've seen drag in bars or clubs, Norris says this musical theater-esque production will achieve incomparable heights as queens literally fly across the stage during a never-before-seen stunt.

"The theatrics are much more intense. We have aerial nowadays, new lighting and sound techniques, the cueing of certain set pieces is all timecoded, it's wild," Norris says. "To see the queens onstage with dancers and aerialists, it's quite the production you don't ever see."

The queens will travel back in time through iconic periods of history, displayed in their diverse costumes, choreography, and an interactive lip-synch smackdown.

Jorgeous is touring with Werq the World for the first time.
Photo by Marco Ovando
"We're looking at bringing back an interactive lip-sync battle, with extra layers on it, so I think now we can have the queens out in the audience, finding people to participate," Norris explains.

A theater being much larger than your average bar, Norris and his team set out to create uniquely personal connections between the audience and the queens, including Asia O'Hara, who will perform at the Fort Lauderdale show.

"I know Asia O'Hara is the number one queen to always run off the stage and harass people for either information, to join the game, or just to talk with the fans like, 'Why are you wearing that shirt? Go buy my merch,' and we love her for that," Norris says, chuckling.

The previous COVID-19 precautions required masks during meet-and-greets, and autographs were not permitted. However, some precautions remain the same. Norris emphasizes meet-and-greet attendees are still required to provide proof of COVID-19 vaccination or a negative test within 72 hours of the event.

"It was very taxing to see people kind of disappointed, but we had to take the proper precautions," Norris recalls. "We're opening up to not have masks on full-time, and they're not going to be six feet apart, just so that there's a bit more personal interaction, they can be a bit more relaxed, and give more time to everyone."

Voss Events promises never-seen-before theatrics during Werq the World.
Photo by Marco Ovando
Voss Events has not yet decided whether to permit autographs.

"Unfortunately, that's still a cautious point of contention, but we'll always have pre-signed merchandise," he says. "Getting something signed isn't such a big deal, but we're getting back to our roots to overall just bring people back to good graces."

If you miss out on the show, you might just catch the queens turning it out at some local hot spots.

"During Drive' N Drag, we were trying to keep it safe and stay contained within our hotels or our trailers, so this time you may absolutely see us bopping around for a shot after the show somewhere," Michaels tells New Times. "I'm just excited to be kind of living a normal life again."

"We're trying to look at ways to bring RuPaul's Drag Race to more people, and not necessarily have a show behind it, but more of an experience," Norris says, pointing to events such as Stranger Things: The Experience, which brings guests into an immersive version of the show. "So how fun would it be to have a Work Room experience?"

RuPaul's Drag Race Werq the World Tour. 8 p.m. Friday, July 8, at Broward Center for the Performing Arts, 201 SW Fifth Ave., Fort Lauderdale; 954-462-0222; browardcenter.org. Tickets cost $39.50 to $89.50 via ticketmaster.com.
KEEP MIAMI NEW TIMES FREE... Since we started Miami New Times, it has been defined as the free, independent voice of Miami, and we'd like to keep it that way. With local media under siege, it's more important than ever for us to rally support behind funding our local journalism. You can help by participating in our "I Support" program, allowing us to keep offering readers access to our incisive coverage of local news, food and culture with no paywalls.
Make a one-time donation today for as little as $1.