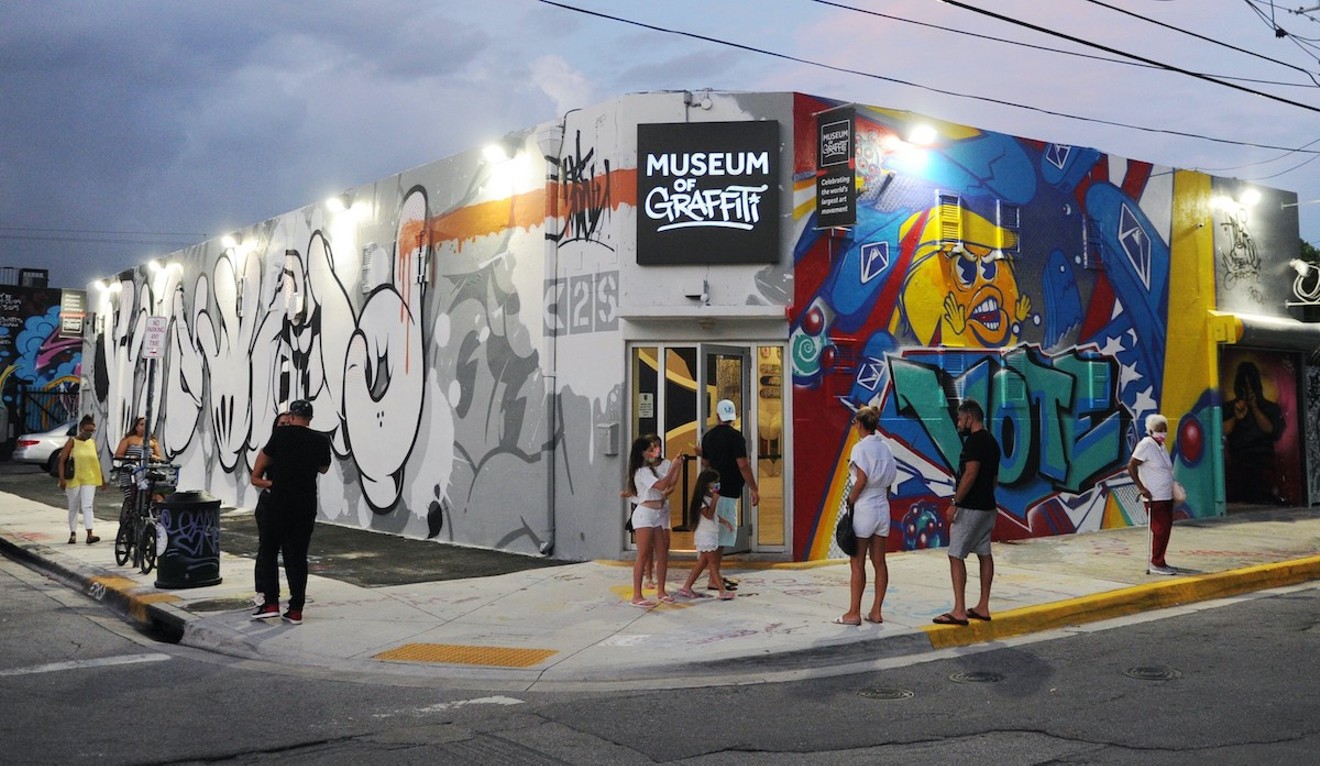 The Museum of Graffiti is celebrating its first anniversary during Miami Art Week. Photo by World Red Eye, courtesy of Museum of Graffiti
Museum of Graffiti cofounders Alan Ket and Allison Freidin are hard at work preparing their Wynwood space for Miami Art Week 2020. Even as they speak with New Times via Zoom, the duo is sorting through pieces by artist Ahol Sniffs Glue for a large display case. The late-afternoon light hits the back wall at just the right angle to illuminate the row of multicolored paintings.

One short year ago, the Museum of Graffiti celebrated its grand opening with throngs of guests. Now, the museum owners are gearing up to honor its first anniversary with a slew of events, both on- and off-site.

“We’re giving this art movement a platform and a voice and trying to encourage artists from this movement to do more and participate more,” Ket says. “We’re just pushing through and acting like it’s all good — while we wear masks.”

As the museum readies for Art Week visitors, Ket says they’re following all the city mandates, including requiring facemasks for guests and implementing timed entries to better control capacity.

“I think that as adults, we try to think of every scenario you might encounter so you can prepare for it, but I don’t think there was anything that could have prepared us for COVID,” Ket says. “It’s been quite dramatic and stunning and a bit depressing.”

Despite the global pandemic looming, Miami’s local art scene is still putting on a show.

In addition to the two solo shows within the museum space, the Museum of Graffiti is presenting work by Gustavo Oviedo at the Shelborne, hosting a poolside painting with artist 1DER at the Surfcomber on Thursday, December 3, and having an outdoor screening of Why the Spray on Saturday, December 5, at the museum.

Ket, who is himself an artist and curator, believes the lack of international tourists and large-scale events during Miami Art Week means the locals will come out and show up.

“It’ll be something where the locals will really be able to participate,” he elaborates. “In the past, [Art Basel] has been more catered to the international tourists, so I think this year it’ll be a homegrown feeling… and not feel so exclusive or closed off to local audiences.”

As Ket continues to sort through crates, David Anasagasti (AKA Ahol Sniffs Glue) stands a few feet away. He's dropping off some recent paintings for his "Biscayne World" exhibit at the museum.

“This place is like an institution that really pushes knowledge about street art, so whenever I get the opportunity to do something with the Museum of Graffiti, I jump at the chance,” says Anasagasti, who was one of the artists who participated in this museum’s opening in 2019 and has worked with cofounders Ket and Freidin in various capacities.

A piece from the exhibit "Ahol Sniffs Glue's Biscayne World," which will be on display during Miami Art Week.
Photo courtesy of Museum of Graffiti
The exhibit will feature some of the artifacts Anasagasti used in his 2014 film Biscayne World. The 11-minute short came to fruition after Anasagasti was hit by a car in 2012 and began using public transit to get around the city. While riding the bus, the artist would often be inspired to draw the characters he encountered.

“This is the first time that they’re actually viewed as art pieces versus seen in the movie,” Anasagasti says.

The artist kept all his sketches from that time period; those and other mementos will be laid out in a large display case. Also, there will be lightboxes set up around the space for guests to interact with and a large-scale replica of a set used in the film. Museum of Graffiti also published a hardcover book to compliment the exhibit.

Anasagasti says he’s been populating Instagram Stories with filters as another means for guests to interact with the exhibit's contents.

“It’s so cool to be able to do something with Biscayne World and using the characters and artifacts from that time,” Anasagasti says. “I’m really proud of all this, and it’s humbling to see it all happen and come together.”

"Ahol Sniffs Glue’s Biscayne World" exhibition opens at the Museum of Graffiti on Tuesday, December 1, and remains on display until February 2021. Anasagasti will share the museum space with fellow street artist and New York native Angel Ortiz who paints under the guise of LA2. "Eye Candy" featuring the works of LA2 opens on Friday, December 4.

"Ahol Sniffs Glue’s Biscayne World." Tuesday, December 1, through February 2021 at the Museum of Graffiti, 299 NW 25th St., Miami; 785.580.4678; museumofgraffiti.com. Sunday through Saturday 11 a.m. to 7 p.m. Tickets cost $16.
KEEP MIAMI NEW TIMES FREE... Since we started Miami New Times, it has been defined as the free, independent voice of Miami, and we'd like to keep it that way. With local media under siege, it's more important than ever for us to rally support behind funding our local journalism. You can help by participating in our "I Support" program, allowing us to keep offering readers access to our incisive coverage of local news, food and culture with no paywalls.
Make a one-time donation today for as little as $1.