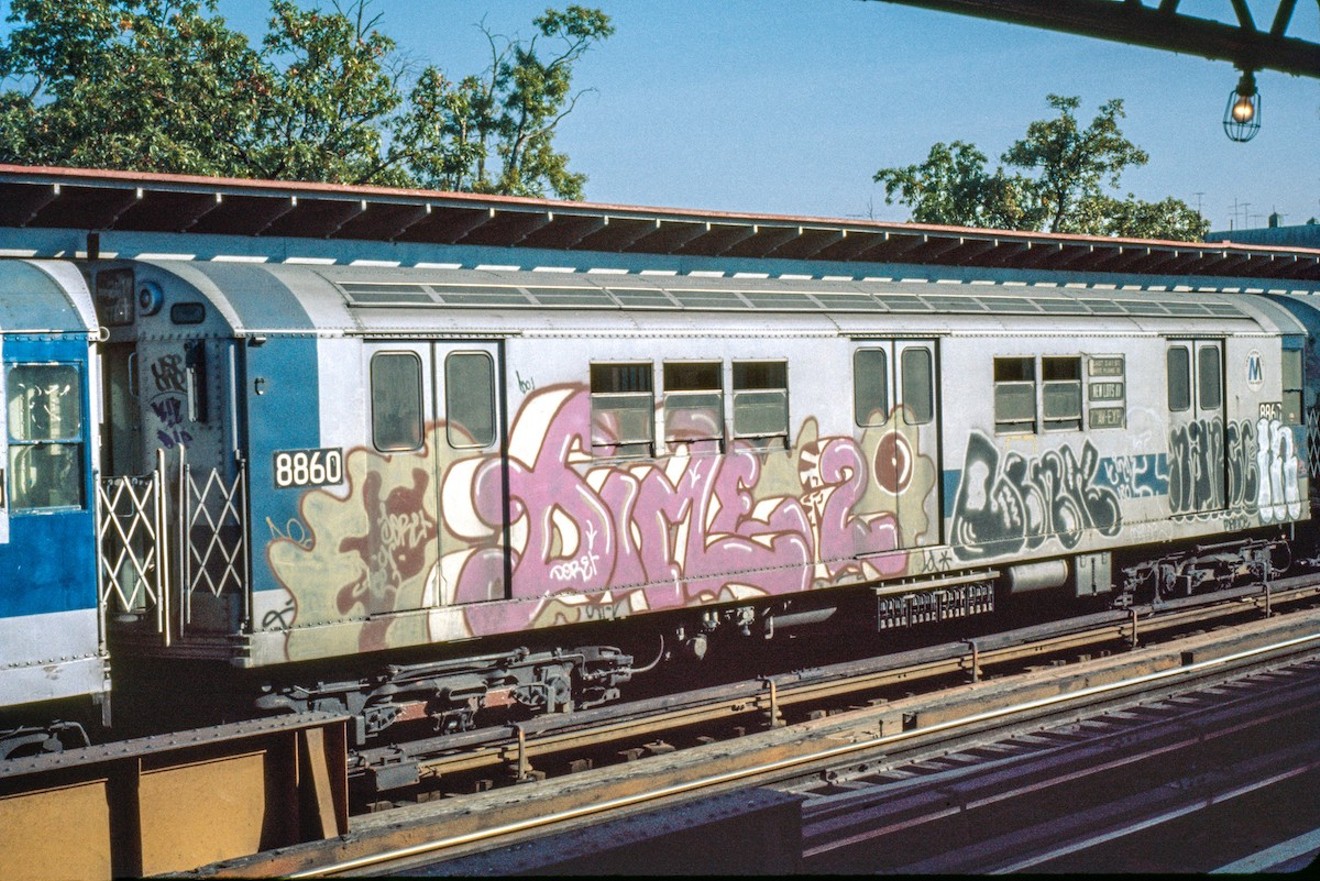 A train painted by artist Pel (AKA Dime 2) in 1973. Photo by Robert Browning
In 1999, two Miamians emblematized the clash between graffiti artists and a city that wanted them behind bars. Crook and Crome (whom the media didn’t initially know were different people) were notorious for tagging throughout the city. Perhaps most infamous was their tag on a large visible wall near I-95 on NW 24th street in Wynwood. Soon thereafter, police tracked them down at their apartment, found Crook at home, and arrested him. In an attempt to make an example of him, the Miami-Dade State Attorney’s Office asked for a $1 million bond. The judge refused and set it at $50,000 instead. The case was eventually dropped when it was revealed the police had searched the apartment without a warrant.

Twenty years later, a mural on NW 24th Street in Wynwood would not only be legal but also welcome, though you’d have to pay Crook and Crome big money to paint it for you. Most visitors wandering around the neighborhood and posing for photos in front of the neighborhood's stunning graffiti have no idea who created the pieces or how street art became so popular. That stands to change when the Museum of Graffiti opens in Wynwood December 5.

Cofounders Alan Ket and Allison Freidin began working on the first-of-its-kind contemporary art museum about 18 months ago. Ket, a well-known graffiti artist, collector, historian, and author of several books about the art form, moved to Miami from New York two years ago to work on a project at Wynwood Walls. He was introduced to Freidin, an attorney and businesswoman who advocates for artists, and the two quickly hit it off.

“I thought that she would be a perfect partner to come onboard because not only is she passionate about this art movement, but she is a Miami local,” Ket says. “She has local roots; she knows the landscape and how to set something like this up here.” All of the above, along with Ket’s firsthand experience and knowledge of graffiti's history, made for a winning partnership.

“I definitely saw a void here, a lack of education,” Freidin adds. “I was concerned about the fact that Wynwood kind of popped up overnight, and the artists are really responsible for the change from this sleepy industrial neighborhood into a worldwide art destination. There was nowhere to learn about the history, to learn about the actual artists.”

Ket had always imagined a graffiti museum in New York, the movement’s birthplace. But as an area that’s become a renowned destination for its graffiti, Wynwood turned out to be uniquely suited for the project. “This particular area of Wynwood is a very special neighborhood. There’s not many other places like this in the world, and so why not here, why not now?” he says.

Alan Ket and Allison Freidin
Photo by Tim Walker
“We’ve been waiting for this our whole lives,” says Cey Adams, one of the artists whose work is included in the museum. In a world where everybody wants a piece of graffiti culture but few understand its history or significance, Adams believes the story is in the right hands with Ket and Freidin. “The most important thing is that it’s somebody from the culture, because you never have to worry about their intentions."

As with many art forms that originated in the streets, one of the first things the team considered was what it would be like to experience graffiti inside a traditional museum space — how could graffiti possibly be contained indoors? In the end, they didn’t try to contain it. In addition to offering the walls inside the museum, the curators also commissioned 11 outdoor murals by teams of artists from around the world. One wall, a collaboration by Miami native Abstrk and Peruvian artist Entes, pays tribute to some of graffiti’s greats through portraits of them. On another, the artist Slick’s signature white-gloved “L.A. Hands” spell out “Wynwood.” One of the pieces, painted by New York's Ces, Yes2, Doves, and Mast, tells the artists’ personal stories as they’ve all watched their craft evolve from being regarded as vandalism to being celebrated as works of art.

Indoors, the museum’s permanent collection leads visitors through graffiti’s history, from its origins on New York City subway trains in the '70s through the beginnings of its mainstream takeover in the '90s. Two galleries will display rotating exhibits by contemporary graffiti artists; the first will be a show by the Amsterdam-born artist Niels “Shoe” Meulman, known for his calligraffiti writing style. “We chose Shoe to open this show because his work still really revolves around perfecting letters,” Freidin says of his calligraphic style.

Viewers will learn about some of graffiti’s earliest pioneers, such as Phase 2, Blade, and Lee Quiñones, as well as top artists from the '80s, including Lady Pink, Futura, and Sonic. A Miami area charts the movement’s rise in the Magic City and displays canvases from the very first gallery show of teenaged graffiti artists in the ‘80s.

“We will address the elephant in the room — the fact that graffiti had very humble roots in vandalism and routinely artists were getting arrested,” Freidin says. “It’s not a secret and it’s something everybody likes to talk about, but the goal of our project is really to celebrate these heroes who continued despite all this, persevered, and made this into a global art form.” You’ll see images of tagged subway cars by photographer Henry Chalfant, along with pieces of the trains themselves. Display cases full of old-school spray cans and thick magic markers demonstrate the earliest tools of the trade.

“Just looking at this gives me chills,” says Adams, who began tagging in New York at the age of 15 and remembers saving his money to buy new markers. “You’d save up for weeks. If that thing cost $15, to me that was like half a month's worth of work.”

An untitled spray-paint-on-canvas work by Jesse Rodriguez, AKA Sonic Bad, from 1982.
Collection of the Museum of Graffiti
In the shift from the '80s to the '90s, “all of a sudden, every company under the sun wanted a graffiti writer as their art director, pushing out skate decks, T-shirts, shoes — you name it, they were merchandizing it,” Freidin says. Adams, for instance, transitioned to graphic design in his 20s while some other members of the movement had begun to leave for Europe. He met Rick Rubin and Russell Simmons around the time they were forming Def Jam Recordings and became the label's creative director. Adams later cofounded the Def Jam's in-house design studio, the Drawing Board. Over the next 20 years, he designed some of hip-hop’s best-known album covers and logos for artists such as the Notorious B.I.G., the Beastie Boys, and Mary J. Blige.

“Big companies hire graffiti artists to do the graphics, but guess who’s the design director inside the company? Also a graffiti artist,” Ket says. “There’s this incredible ecosystem and network of artists supporting other artists from within this community that we grew up in.”

That same communal spirit was present in the creation of the museum as well. Graffiti writers were hired not only to create art but also to perform maintenance and setup such as installing the building’s electrical wiring. For Ket and Freidin, it was also important to honor artists who made significant contributions to the movement and paved the way for work that came later but might not have gotten the same widespread recognition as famous graffiti artists do today. “We’re looking at some of these people that popular culture might not know about, but we know about it,” Ket says. “We want to correct the story and insert some of the proper history so that the men and women who made this get their due. I think that’s the work that a museum has to do.”

The museum also has its own gift shop, offering an array of exclusive and limited-edition merchandise. It includes rare skate decks by Phase 2 (of the 100 that were made, the museum has ten), original miniature “sprayskulls” handmade from resin and recycled spray caps by the artist Remote, and the largest collection of graffiti books. In the shop’s "denim bar," visitors can customize their own jean jacket with artist-made pins and patches.

Ket and Freidin hope the Museum of Graffiti will only build on its ambitious beginnings. Plans for public programming such as artist talks, signings, and events for kids are already in the works. The founders have gotten a strong response from the artists they’ve reached out to so far and have received far more work than they have space to show at once. “It’s a very big story — it’s 50 years' worth of history. We can’t cover it all in one shot,” Ket says. “Everybody is eager to share because a place like this hasn’t existed yet, and we all in our cities have our scenes and our history and important people that should be recognized.”

For now, they think having a space to tell this story represents a major step forward for the medium. On a personal level, Adams believes it will be a place to reunite with old friends. “This is going to be a hub for all those artists: They’re going to show up here; they’re going to be telling war stories,” he says. “I think one of the best things about something like this is that you have a place to go. I have a place now. I can tell collectors: 'Go to the graffiti museum.' Even if my stuff iss not there, just go there because the story is here.”

Museum of Graffiti. 299 NW 25th St., Miami; 786-580-4678; museumofgraffiti.com. Admission costs $23 for adults and $15 for students; children under 5 get in free. Opens December 5.
KEEP MIAMI NEW TIMES FREE... Since we started Miami New Times, it has been defined as the free, independent voice of Miami, and we'd like to keep it that way. With local media under siege, it's more important than ever for us to rally support behind funding our local journalism. You can help by participating in our "I Support" program, allowing us to keep offering readers access to our incisive coverage of local news, food and culture with no paywalls.
Make a one-time donation today for as little as $1.