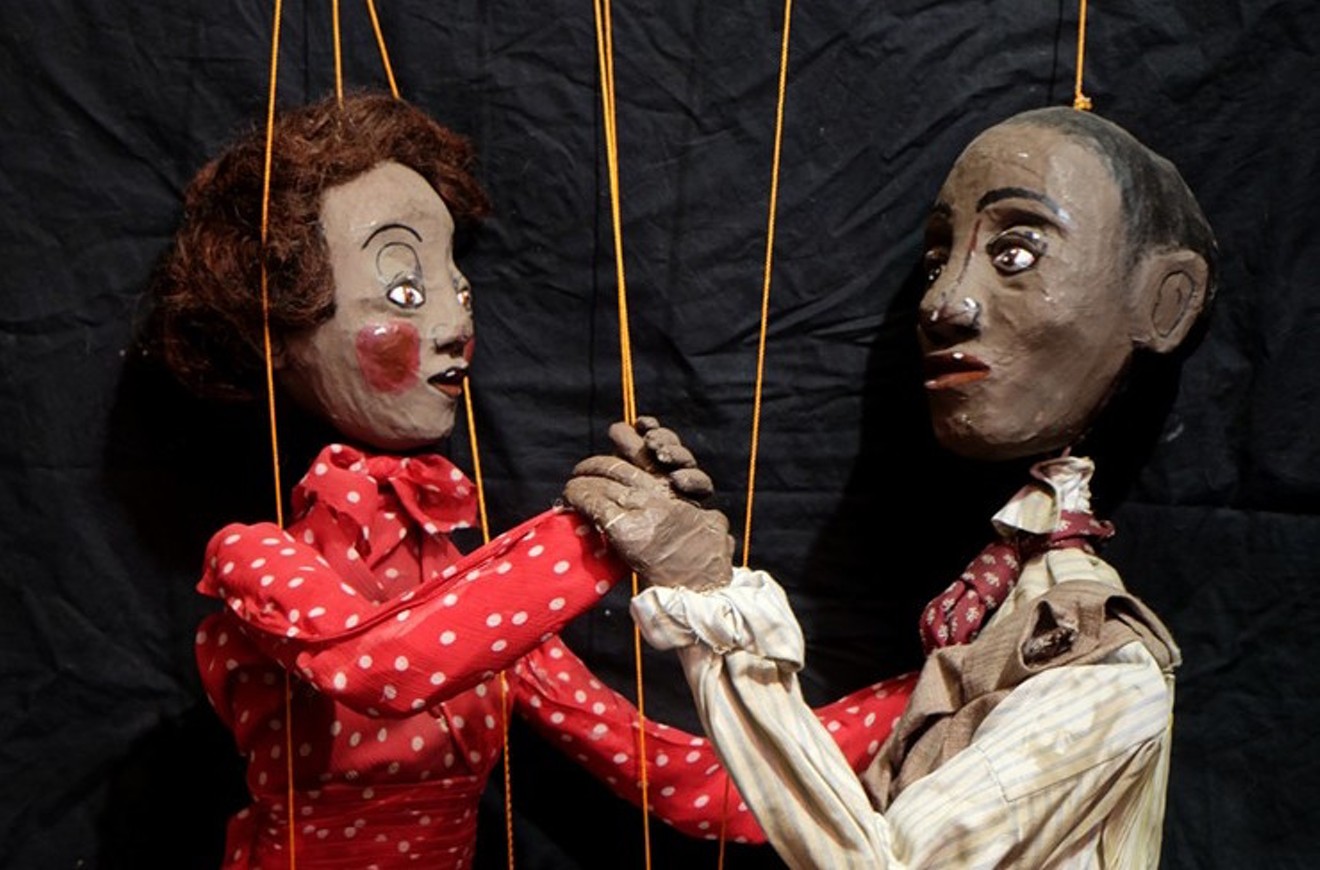 Puppet maker Pandora Gastelum's Jazz Dancers depicts a New Orleans jazz tale. Photo courtesy of the Ballard Institute and Museum of Puppetry.
NOTE: Owing to the volatile situation surrounding the novel coronavirus (COVID-19) outbreak, New Times readers should not assume that any event that was "on" at the time of publication will not be canceled at a later time. We will do our utmost to update our stories to reflect cancellations, but please call ahead before setting out for any events.

When most people think of puppetry and entertainment, the buoyant cast of Sesame Street is usually the first thing to come to mind. However, the "Imagine Puppets" exhibit on display at Fort Lauderdale's African-American Research Library and Cultural Center tells a different story, namely that of the oracle tradition of African storytelling. During the postslavery era in the United States, African-Americans employed the string and wood-heavy performative art form to detail their experiences while under subjugation as well as revive a suppressed African custom. This medium of craftsmanship-meets-performance art continues today, as there's now a variety of black puppeteers who share their comedic routines and stoic partners with audiences across the nation.

“Imagine Puppets,” which is on display through Monday, March 30, hosts a bevy of these handmade figurines by contemporary African-American artists. Presented by the Miramar Cultural Trust in collaboration with ArtServe, the exhibit will also offer a free workshop led by puppet maker Anwar Floyd-Pruitt on Friday, March 20.

“Puppets are intergenerational, and this particular exhibit tells stories, whether it’s front-porch entertainment or churchgoing women who had something wonderful to look forward to,” explains Rhonda Siegel, director of business development for the Miramar Cultural Trust.

Siegel says it took two years and sponsorships from Rubenstein Law and the Castle Group to make the exhibit a reality. Originally on display at ArtServe, the works were moved to the library, where Makiba J. Foster, the library regional manager, is overseeing the display all month.

“This is a fine arts exhibition because of the craftsmanship it takes to make puppets; people don’t necessarily value that in a way that should be elevated,” Foster explains. “Bringing this to our community is really important. Because our archive houses craftsmanship, [puppetry] is along that same continuum of black creative genius.”

The nattily dressed puppets interact in various scenes inside glass cases in a quiet chamber of the library. Edna Bland’s Muppet-like character Sister Edwina wears a satin pink jacket and skirt set and pearl accessories. A pink veil covers her cheery mahogany face, a depiction of how black women dress in their Sunday best for church. Although the character pays tribute to the larger tradition of church and its place in African-American communities, Bland says Sister Edwina was named for her own mother.

“I’m a church kid, so I grew up seeing women in the African-American church come very dressed up,” Bland reminisces. “I could remember my mom telling me why we get so dressed up in our Sunday clothes, because when you’re going to see the 'King of Kings,’ you should give him your best and look your best.”

Bland, a theater arts teacher at Millennium Middle School in Sanford, dialed in on her interest in puppet-making while living in New York City. She had always marveled at Loretta Long, one of the first black actors on Sesame Street. But it was a chance meeting with Caroll Spinney, the late puppeteer who voiced Big Bird and Oscar the Grouch for almost 50 years, that truly shaped Bland and her dedication to her craft. Spinney later invited Bland on the set of Sesame Street and eventually ended up mentoring her.

Synthesizing her own personal experiences with the techniques she learned from Spinney, Bland has gone on to produce puppetry shows rooted firmly in the spirituality from her childhood.

“As a puppeteer, when you make that puppet come alive, it does become a person," she says. "That’s the magic of it — it’s no longer just material. As puppeteers, we get that we can use our art form to spread messages.”

Other stories represented at the exhibit include Bruce Cannon’s 9-year-old marionette Michael Jackson dancing next to an older, Jheri curl–era MJ, as well as Pandora Gastelum’s Lulu White figurine that commemorates an infamous New Orleans Creole brothel madam who reigned during the Storyville era. Another work of Gastelum’s, Jazz Dancers, was influenced by an eerie Crescent City tale about a serial killer presenting an odd ultimatum to residents: Dance to jazz music all night or die.

“Puppets are a gateway for adults and children to have open communication. The puppetry involved in the exhibit tells stories in a safe way. It began in 5th Century B.C. to preserve culture through oral history and now for communication, education, and inspiration,” ArtServe executive director Craig W. Johnson says.

Continuing the educational realm of puppetry, Anwar Floyd-Pruitt will lead the Imagine Puppets workshop, during which he'll introduce the methods he uses to teach puppet-making to at-risk teens. The visual artist developed a technique to make cost-effective puppets from raw materials, including cardboard, straw, glue, and construction paper. When Floyd-Pruitt teaches an art class to teens from a correctional facility or shelter, he says he has only a few minutes to capture their attention, which he does by interweaving hip-hop music into his lessons.

“I’m putting myself out there through my art," he says. "As an older person, I’m trying to communicate to [the students]: ‘This is what I do, and I would love for you all to join me in this venture of hip-hop storytelling and puppetry.'"

Pruitt collaborated with students involved in Wisconsin's Madison Public Library’s Making Justice program, a community-based learning initiative for teens caught up in the court system, to create a wallpaper montage including eccentric puppets. The piece, which is on display in "Imagine Puppets," features a variety of figures, shapes, colors, and movements that all speak to the possibilities of puppetry as an art form and mode of creative expression.

“Puppets are performance, and puppets are visual arts, so, for me, it’s bringing these two things back together," he says. "There’s an inspiration that takes place when you get out of yourself and put that energy into this object."

"Imagine Puppets." Through Monday, March 30, at the African-American Research Library and Cultural Center, 2650 Sistrunk Blvd., Fort Lauderdale; 954-357-6282; sunny.org. Admission is free.
KEEP MIAMI NEW TIMES FREE... Since we started Miami New Times, it has been defined as the free, independent voice of Miami, and we'd like to keep it that way. With local media under siege, it's more important than ever for us to rally support behind funding our local journalism. You can help by participating in our "I Support" program, allowing us to keep offering readers access to our incisive coverage of local news, food and culture with no paywalls.
Make a one-time donation today for as little as $1.