The Eight Best Things to Do in Surfside 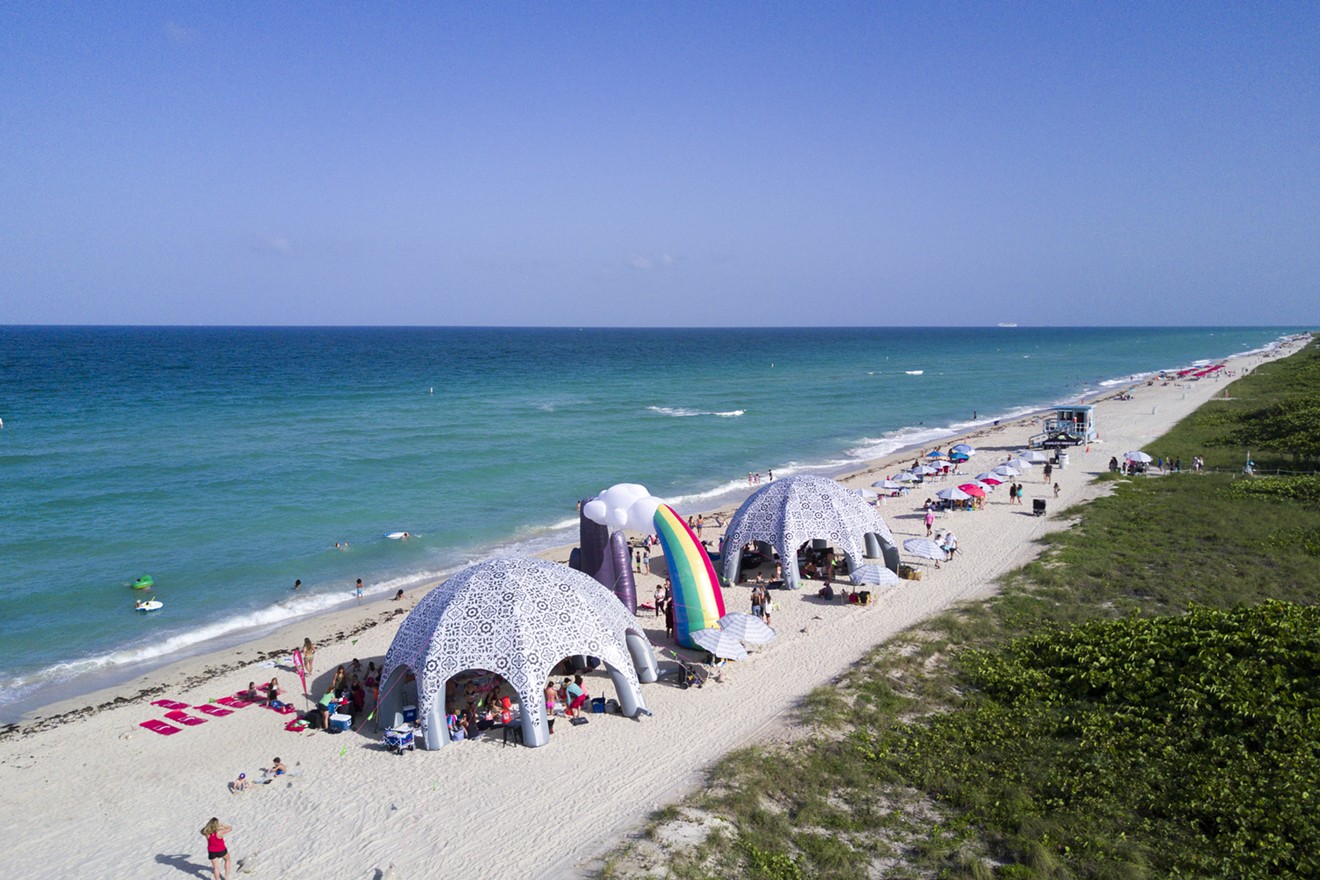 Friday Beach, a monthly community gathering on the sand in Surfside, celebrated Bollywood in August 2017. Courtesy of Friday Beach
Surfside is a rare bird among Miami’s beach destinations. Sandwiched between the ritzy Bal Harbour and the working-class, ethnic enclaves of Miami Beach’s northernmost neighborhoods, the quaint town of Surfside — all one square mile of it — stands out for what it’s not. You won’t find nightclubs, McMansions, or sky-high megacondos anywhere within city limits. Instead, you’ll encounter quirky charm amid the luxe hotels flanking the ocean and the single-family homes skirting the Intracoastal. The family-oriented town recently adopted the slogan “Uptown Beachtown” for its publicity campaign, banking on the swank associated with the latter word. Sure, it's got all of that, but what keeps Surfside easy-breezy are the simple things, such as friendly neighbors, safe streets, and homegrown connections.

Here are eight things to do in Surfside that'll get you familiar with South Florida's "Uptown Beachtown." Le Sirenuse is located inside the Surf Club, the historic heart of Surfside.
Christian Horan Photography
1. Raise a glass to history. Founded in 1935, Surfside got its start when the patrician elite who built the Surf Club needed a town to go with their fancy oasis. The list of VIPs at the Surf Club reads like a who’s who of the 20th Century, including Miami Beach founding fathers Carl Fisher, Irving Collins, and Harvey Firestone. Fabulously famous guests such as Winston Churchill, Elizabeth Taylor, Ava Gardner, Frank Sinatra, and Noel Coward were also drawn to the tropical air and pristine waters of the barrier island. Today a new Four Seasons hotel and residence has been added to the club, replicating the glamour of a bygone era. Richard Meier’s modern, sleek glass structure envelopes a part of the original Surf Club, restored to Russell Pancoast’s Mediterranean-revival style. Le Sirenuse Champagne Bar at the new Surf Club is open to the public and sits in the original 1930s ballroom where legendary parties entertained the beautiful ones who made headlines. Order the Duke and Duchess of Windsor cocktail, a refreshing, bubbly tribute to the Surf Club’s most famous royal guests, served in handmade Venetian glasses. 9101 Collins Ave., Surfside; sirenusemiami.com. Visit Surfside
2. Roll like the mayor does, on a skateboard. Mayor Daniel Dietch, who’s lived in Surfside for 18 years and been in elected office for nearly eight, has made some big changes in the small town. Under his direction, Surfside has imposed height limits on construction and implemented the first resiliency dunes in Florida to protect streets from storm surges. Dietch walks his talk and is so environmentally conscious that he commutes to work on a Sector 9 longboard. That's easy to do in pedestrian-friendly Surfside, where a healthy environment helps people connect. Kids play in the street and folks can join the chief of police on a monthly bike ride. “Surfside really is a special community,” Dietch says. “We’re trying to manage it so we can work toward resiliency. I also equate that with ‘knowing your neighbors.’” 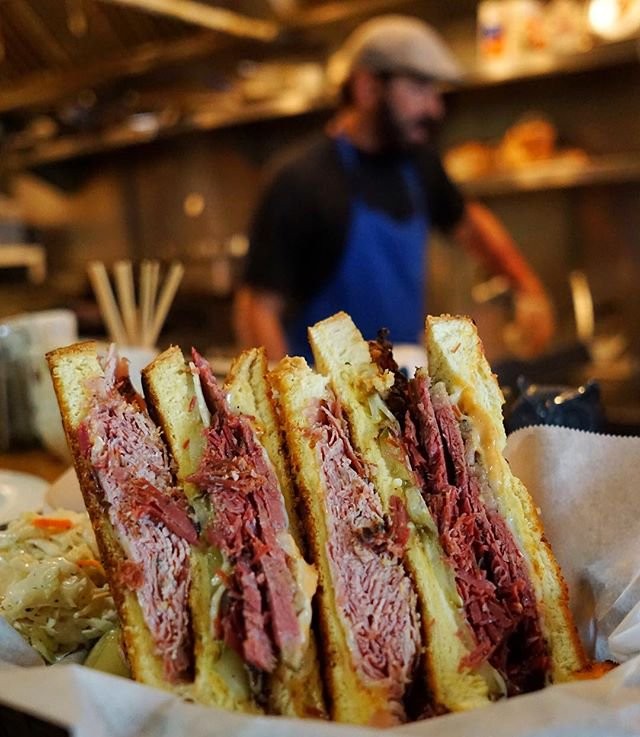 "Breakfast has no rules. Have a Jewban!" says Josh Marcus, chef/owner of Josh's Deli.
Courtesy of Josh's Deli
3. Nosh like you’d die for it. Many Surfside restaurants cater to its Orthodox Jewish community by serving kosher meals and keeping Shabbat hours, but there’s one spot that lovingly breaks from tradition: Josh’s Deli. Chef/owner Josh Marcus serves “everything you never wanted in a traditional Jewish deli.” He had always wanted a small space to do his own thing, and the 25-seater in Surfside has been just right for seven years. “Surfside is unique in all of Miami,” he says. “It allows me to creatively improvise off the history of Jewish cuisine.” Some of this inspired cooking ends up on plates in dishes such as the Jewban and tuna latkes. Customers get more than just whimsically unorthodox variations on classic Jewish deli comfort foods; they also get to hang out with a friendly neighbor. “I know nonkosher people by name,” Marcus says. “I know their kids. You become part of people’s lives. The mayor’s son is even apprenticing with me this summer.” 9517 Harding Ave., Surfside; joshsdeli.com. 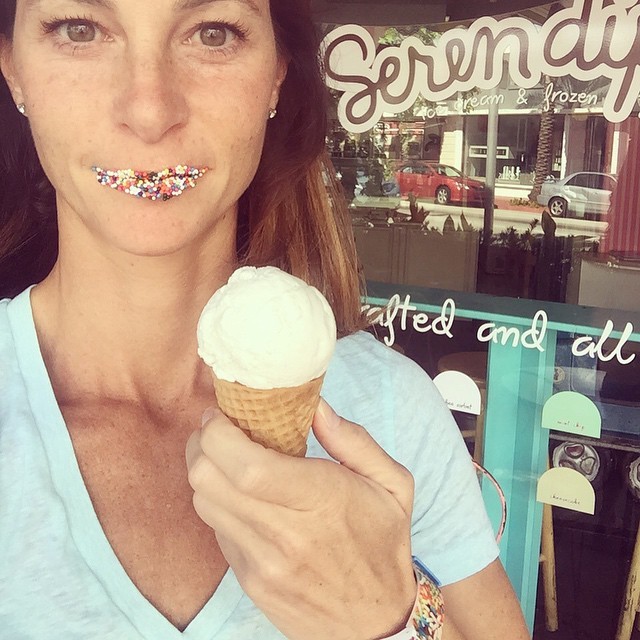 Jessica Levison, owner of Serendipity.
Courtesy of Jessica Levinson
4. Stay for dessert. Jessica Levison of Serendipity Yogurt Café also thrives on the intimacy of the community. The lawyer-turned-ice-cream-maker was a Surfside resident when she opened the neighborhood shop nine years ago. Levison focuses on small-batch, organic production, but the sweetness of it all is with the neighbors. “What’s cute is that those kids were babies when we opened,” she recalls. “Today they hang out here with friends. It’s been cool to follow kids in the community with the evolution of Serendipity.” The mother of three takes suggestions from residents for new ice cream, yogurt, and sorbet flavors — cotton candy, piña colada, lavender orange, to name a few — and recently launched Peekaboo, which is available in pints at the store. “I thought it would be cool to sneak vegetables into ice cream so that kids won’t notice it,” she explains. “Many Surfside locals were taste testers. Peekaboo was truly brought to you by the community of Surfside.” 9457 Harding Ave., Surfside; serendipitycreamery.com. Le Beau Maroc boutique in Surfside.
Enrique Rosell
5. Shop the strip and support local business. Many of the town’s neighborhood mom-and-pop businesses have survived for decades with a kind of longevity that’s uncommon in Miami-Dade. The three-block commercial strip still serves shoppers in storefronts that are at least 50 years old, run by their original owners or their families, including a tobacconist, a jeweler, a baker, an optician, and a tailor. But Surfside is far from provincial when it comes to fashion. The town also boasts world-class upscale stores, including Le Beau Maroc, which owner Asmaa Benkirane opened in 2014. The Moroccan-born Benkirane brings exclusive couture to Surfside from Morocco’s top designers in the form of silky kaftans. Other collections include bridal wear, cocktail dresses, and beach coverups. Benkirane enjoys running a posh boutique in a neighborly community. “I see a lot of international visitors and locals,” she says. “Every day is exciting, interacting with different people. The Surfside vibe is just getting better and better.” 9507 Harding Ave., Surfside; lebeaumaroc.com. 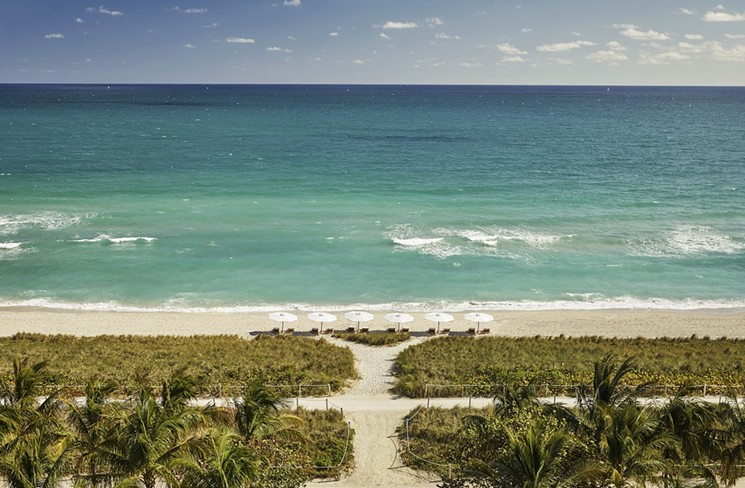 The ocean and Surfside Beach Path, seen from the Four Seasons.
Christian Horan Photography
6. Walk your worries away. Seaside walking and jogging paths and boardwalks abound on the coast from Miami Beach to Bal Harbour, but Surfside’s section — roughly a mile from 88th to 96th Street — offers the benefit of Zen-like simplicity for its uncrowded beaches, dune path, and a firmer, wider path separating the dunes from oceanfront properties. If walking is your thing, Surfside is heaven. Take a stroll from 88th Street through Bal Harbour up to Haulover Inlet, and you’ll be rewarded with one of Miami-Dade’s best beach views at the rock jetty. Consuelo Castañeda's Untitled (Hands Diptych), part of PAMM's InsideOut program.
Courtesy of PAMM
7. See art everywhere. Surfside is the only Miami-Dade seaside community with a significant citywide exhibit that pays tribute to marine life. “Tales of the Surfside Turtles” includes resin and fiberglass sculptures that stand five feet high with a flipper span of four feet. The colorful sculptures raise awareness about one of the area’s most important seasonal visitors — the loggerhead turtles that return each year from May to October to lay eggs under the sand. The species is threatened, and Surfside works closely with Miami-Dade’s Sea Turtle Conservation Program to ensure that nests go undisturbed.

The town also displays work by Miami muralist Douglas Hoekzema, AKA Hoxxoh, at 96th Street Park, as well as a sculpture by Pablo Atchugarry that was donated by the boutique luxury condo Fendi Château at the beach end of 94th Street.

This year, Surfside is one of five Miami-Dade cities participating in the Knight Foundation’s InsideOut USA program, hosted by Pérez Art Museum Miami. The program, which includes four other U.S. cities, hopes to pique interest in local museum collections by exhibiting art in unexpected places. You can check out the reproductions of 15 masterpieces from PAMM’s collection dotting Surfside’s beach path through mid-September. 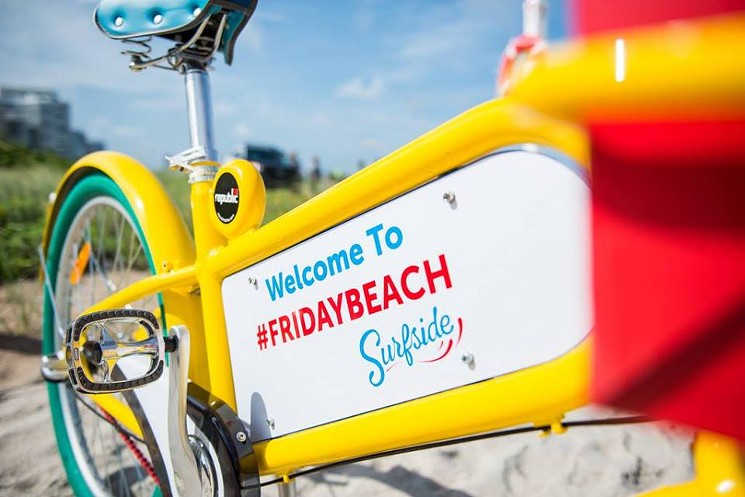 Friday Beach event in Surfside.
Courtesy of Friday Beach
8. Frolick on the beach with locals and tourists. In its second year, Friday Beach is a communal picnic born out of a desire to connect with the community. Surfside resident Sara Liss organized the grassroots event, which is now a bit more formal but no less casual and easygoing. “It was already organically happening in Surfside,” she says. “A bunch of parents got together on the beach every Friday to have a picnic. It’s a gathering place for the town. Friday Beach is a beautiful way to connect with my neighbors, so now we’re doing it on a larger scale.”

Friday Beach takes place every first Friday from May through September and hosts a variety of experiences depending upon the theme, which can range from Americana to Bollywood. Past activities include drum circles for kids, bluegrass music, lawn games, and yoga. On September 1, Friday Beach will celebrate Mediterranean culture through music, bell ydancers, complimentary Mediterranean bites, and Dead Sea exfoliating mud scrubs. Friday Beach begins at 4 p.m. behind the Community Center on 93rd Street. Bring your own beach picnic supplies, gear, food, and drinks.