Miranda July's Kajillionaire Isn't for Everyone — and That's OK Gina Rodriguez and Evan Rachel Wood in Kajillionaire. Photo courtesy of Focus Features
Describing Miranda July's films isn't an easy task; each one its own unique work that prompts divisive reactions. Folks have described her past films, Me and You and Everyone We Know and The Future, with every term that  exists between "beautiful" and "insufferable," and her latest film, Kajillionaire, will likely be no different.

Kajillionaire's quirky synopsis presents two con artists (Debra Winger and Richard Jenkins) who've spent their life together raising their daughter (Evan Rachel Wood) as their equal, only to have her uncomfortably question their relationship and lifestyle when they invite a stranger (Gina Rodriguez) into the mix in the midst of a heist. Some will accuse the film of leaning into its goofy premise and characterization, but Miranda July always remains grounded in exploring her true interest: the human desire for connection.

In everything from her features to her short stories and a novel, July has examined how a variety of characters confront their issues with intimacy. Some seek romantic connections, some seek new purpose in life, some fear everything that's yet to come, and some simply find themselves uncomfortable with the mere thought of change. Kajillionaire dives into the inherent loneliness that comes with being treated as an adult your entire life and how family dynamics can affect so much of the people we become.

Wood's character, Old Dolio, lies somewhere between all of these, seemingly irreparably damaged by the way her parents raised her. An utter lack of familiarity has left her to retreat into herself, looking like a sad turtle and speaking with a raspy voice you'd never expect out of the actress. It's a captivating and transformative performance that feels like an extension of July, who is both a filmmaker and actress herself, complemented wonderfully by Rodriguez's natural charm and playfulness. An oddball and a straight man paired to both comic and romantic effect. 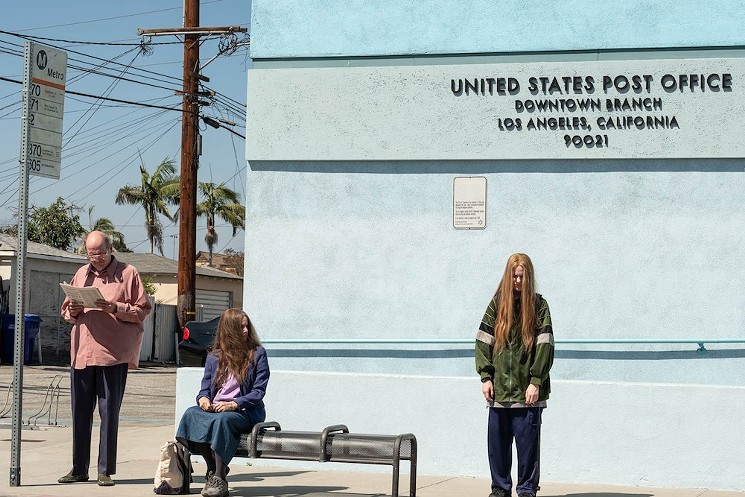 Photo courtesy of Focus Features
The two bounce off each other in surprising ways, and July smartly captures the growth of their relationship through an intimate lens that is as mysterious as is it subtly erotic. There's a lovely queerness (literally and figuratively) to every interaction between them that becomes more compelling to watch than the relationship between Old Dolio and her misfit parents. As enjoyable as Jenkins and Winger are in their respective roles, they're almost forgettable once the film decides that Old Dolio, her growth as a person, and the relationship between her and Rodriguez's Melanie, is its heart and soul.

Where most films about con artists would focus on the cons themselves, Kajillionaire is more interested in the personal relationships of the characters and their dynamics. July is tender in approaching everything from play-acting a loving family to comfort a dying mark to feeling like you don't belong in your own family, and she is more in tune with her characters and their sensitivities than most filmmakers can ever claim to be. She understands how to depict the pleasure in the simplest things, from making pancakes with someone to being embraced by those who are supposed to love you to receiving a gift carries more meaning than a mere gesture.

It isn't a film short of absurdities and visual metaphors that feel a little heavy-handed (like pink foam that bubbles up in our con family's household and threatens to overwhelm any given situation). Still, it's easy to be taken in by the appealing aesthetics, sweet score, and endless eccentricities that it offers. Miranda July's Kajillionaire may not be for everyone, but if you're willing to adjust to the wavelength of the filmmaker and her characters, it's a rewarding view that, more than anything else, feels like a warm blanket.

Kajillionaire. Starring Evan Rachel Wood, Mark Ivanir, Gina Rodriguez, and Debra Winger. Written and directed by Miranda July. Rated R. 106 minutes. Opens in theaters Friday, September 25.
KEEP MIAMI NEW TIMES FREE... Since we started Miami New Times, it has been defined as the free, independent voice of Miami, and we'd like to keep it that way. With local media under siege, it's more important than ever for us to rally support behind funding our local journalism. You can help by participating in our "I Support" program, allowing us to keep offering readers access to our incisive coverage of local news, food and culture with no paywalls.
Make a one-time donation today for as little as $1.