Embrace your inner werewolf and party under the light of the moon at the Wharf's first Full Moon Party of 2021. Early birds at the waterfront venue can enjoy happy hour mules, mojitos, and margaritas from 4 to 7 p.m. ($4 at 4 p.m., $5 at 5, $6 at 6), and food will be provided by local favorites like the Chicken Spot, Spris Artisan Pizza, and Mojo Donuts. Starting at 8 p.m., enjoy fire dancers and other live performers as the Wolf Moon shines over the Miami River. 4 p.m. Thursday, at the Wharf Miami, 114 SW North River Dr., Miami; 305-906-4000; wharfmiami.com. Admission is free with RSVP; table reservations cost $252 to $504 via eventbrite.com. Suzannah Friscia

Australian comedian Caroline Reid's globetrotting flight-attendant alter ego Pam Ann is back, and she is making her way to Hunters Nightclub for her first live performances in over ten months. Reid's one-woman act is notorious for riffing on all things aviation, and her new show, Pamdemic! brings a coronaviral slant to her take on the pitfalls of air travel. Among her previous adventures, the comedian has performed at the London Palladium and Royal Albert Hall and sold out shows at the Hammersmith Apollo. The 90-minute performance will be followed by sets from Hunters' resident DJs, who will keep the party going till close. 7:30 p.m. Thursday, at Hunters Nightclub, 2232 Wilton Dr., Wilton Manors; 954-630-3556; huntersftlauderdale.com. Tickets cost $38 to $100 via eventbrite.com. Olivia McAuley

Doral Central Park kicks off its new drive-in movie series with Star Wars: The Rise of Skywalker, the 2019 film that wraps up the story of Rey, Finn, Poe, and the Skywalker legacy. Bring your own snacks, water, and soft drinks, and be sure to arrive early: general-admission parking is first-come, first-served. Whatever your thoughts about the franchise's most recent trilogy, it's sure to provide a fun escape into a galaxy far, far away. 7 to 9 p.m. Friday, at Doral Central Park, 3000 NW 87th Ave., Doral; 305-593-6600; cityofdoral.com. Tickets cost $5 to $15 per vehicle via eventbrite.com. Suzannah Friscia

As part of its Jazz Roots on the Plaza series, the Arsht Center will spotlight the Miami-based Lemon City Trio, made up of guitarist Nick Tannura, drummer Aaron Glueckauf, and organist and keyboardist Brian Robertson. With its roots in soul music and New Orleans funk, the group is fresh off its newest studio album, Cliffs, which came out in December. With seating sold by the table, you can enjoy light bites and drinks before the show if you arrive when the doors open at 6 p.m. 7:30 p.m. Friday, at the Adrienne Arsht Center for the Performing Arts, 1300 Biscayne Blvd., Miami; 305-949-6722; arshtcenter.org Tickets cost $15 to $60 via arshtcenter.org. Suzannah Friscia

Local dance duo Afrobeta will play at the Doral Yard, the open-air culinary and community hub, on Friday, performing songs from its recently released album, Illusion Motel. Cuci Amador and Smurphio will be joined on stage by the inclusive community collective Miami Sound Choir for a special performance. While you catch the free live concert, grab a drink and some bites from the assortment of vendors at the marketplace, including plant-based restaurant Della Bowls and the Venezuelan rotisserie Un Pollo. Patrons can also sip craft cocktails from the Bar at the Yard. 8 to 10:15 p.m. at the Doral Yard, 8455 NW 53rd St., Doral; 305-744-5038; thedoralyard.com. Admission is free with RSVP via eventbrite.com. Olivia McAuley

If the name Cory Wong doesn't immediately ring any bells, it will after you take a look at his musical rap sheet. From his regular slot performing his jazz-meets-R&B-flavored licks on The Late Show with Stephen Colbert to his Grammy-nominated album Meditations with Colbert bandleader Jon Batiste, the songwriter and producer has become known as a musician's musician. With all this in mind, Wong is the perfect choice to be tapped by the Nu Deco Ensemble as the first guest of 2021 for its virtual concert series. Streaming live from the North Beach Bandshell, the show will feature the music of George Gershwin, John Adams, and a new symphonic reimagination of the music of the Beach Boys. 8 p.m. Saturday; nu-deco.org. Tickets cost $15. Olivia McAuley

Let Fairchild Tropical Botanic Garden expand your hot-drink horizons on Saturday with its Tea Tasting workshop. The bimonthly event dives into different tea cultures and their traditions, educating attendees on the history, sourcing, and of course, the tasting notes of select teas during a three-hour seminar. This week, expert Adrienne Etkin Nascimento of Admari Tea and Chaguan Teahouse will explore the nuances of Japanese, Chinese, and Taiwanese green tea. Each session begins with a short tea meditation before delving into tasting and learning. 1 p.m. Saturday, at Fairchild Tropical Botanic Garden, 10901 Old Cutler Rd., Coral Gables; 305-667-1651; fairchildgarden.org. Tickets cost $50 for nonmembers and $40 for members. Olivia McAuley

South Florida native and Oolite Arts resident Sasha Wortzel is an artist and filmmaker who works in Miami and New York City. Their solo exhibit, "Dreams of Unknown Islands," examines various cycles of life and responds to our current news cycle of environmental collapse, political uprisings, and collective grief. On Sunday, Grammy-winning Attacca Quartet will team up with Pulitzer Prize-winning composer and singer Caroline Shaw for a performance inspired by Wortzel's work, called Sasha Wortzel: Rising. Presented by Oolite and IlluminArts, the concert will be livestreamed from New York City and presented for a group of 100 people at an in-person screening at North Beach Bandshell. 7 to 8:30 p.m. at North Beach Bandshell, 7275 Collins Ave., Miami Beach; 305-672-5202; northbeachbandshell.com. Admission is free with RSVP via eventbrite.com. Suzannah Friscia 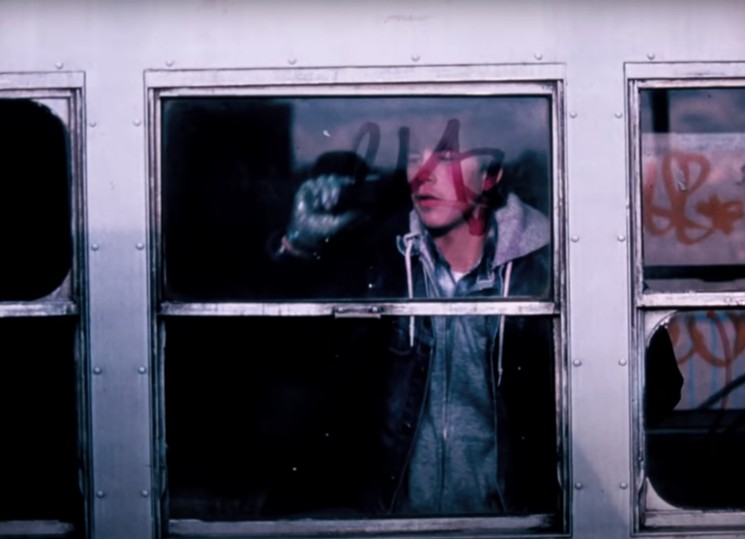 Watch the classic documentary Style Wars under the stars at the Museum of Graffiti, and you may develop a stronger understanding of the museum's artwork in the process. Produced by Tony Silver and Henry Chalfant, the film has become a classic of its genre and is now considered an indispensable record of New York street culture in the early 1980s. Enjoy popcorn and drinks courtesy of Bombay Sapphire, and stay for a Q&A after the screening with New York-based artist Mare139, who's featured in the film as a young adolescent. 7 p.m. Sunday, at the Museum of Graffiti, 299 NW 25th St., Miami; 786-580-4678; museumofgraffiti.com. Tickets cost $25 via showclix.com. Suzannah Friscia

Have you missed belting out your favorite songs in front of a crowd of strangers or watching other would-be singers embarrass themselves while you sip cocktails? Gramps' Let's Sang karaoke night, which bills itself as "karaoke for music nerds," is back. The Wynwood bar has amped up its safety protocols — masks must be worn while singing, no duets are allowed, and mikes will be disinfected after each performance — but in all other respects, it's the karaoke you know and love. You can also follow along with the fun on Instagram @letssang, which will livestream the action every Monday. 8 to 11 p.m. Monday, at Gramps, 176 NW 24th St., Miami; 855-732-8992; gramps.com. Admission is free. Suzannah Friscia

The 36th-annual Everglades Coalition Conference will go transpire virtually this year, assembling a cohort of experts to speak on the restoration, protection, and enhancement of the Florida Everglades ecosystem. The four-day event examines the progress has been made since the Comprehensive Everglades Restoration Plan was passed in 2000 and addresses topics such as toxic algae blooms, climate change, and forgotten stories and current voices of the Everglades. Speakers include Paola Ferreira of the Tropical Audubon Society; Sierra Club president Ramón Cruz; and Thomas Frazer, chief science officer at the Florida Department of Environmental Protection. Tuesday through Friday; evergladescoalition.org/conference. Tickets cost $75 to $100. Olivia McAuley

Filmmaker Andrew Hevia will guide budding young storytellers on Wednesday in perhaps the most crucial aspect of making a film: the budget. Presented by Oolite Arts, Making Movies on a Micro Budget is a free workshop that covers how to develop a feature-length movie without the backing of a big studio. With a hypothetical sum of $50,000, Hevia — who previously worked as a producer on the Oscar-winning Moonlight and the award-winning Cenizas — will share tips and tricks regarding how to adapt an imaginative vision to the reality of a microbudget, using specific films as case studies to show that magic can happen even with limited funds. 6 p.m. Wednesday; oolitearts.org. Admission is free with RSVP. Olivia McAuley